Blog - Latest News
You are here: Home1 / Article Archive2 / I was there3 / The people you meet in aviation – some good, some bad 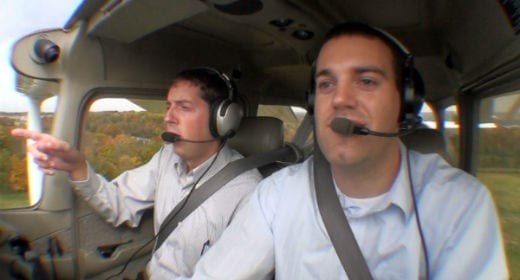 There will be few pilots, professional or amateur, who will not remember the good instructors with whom they have flown. These instructors will usually be remembered with everlasting affection. Conversely, those instructors who have denigrated your best efforts and in doing so destroyed your self confidence, are invariably remembered with a cold contempt usually reserved for one’s worst enemy.

Ansett Airlines of Australia have a novel way of weeding out the undesirables amongst their captains, and every airline has a few of these types who have slipped through the system undetected. The rostering policy permits first officers to select not to fly with any particular captain, with no questions asked. It soon becomes evident that there is a problem with a certain captain when many first officers bid not to fly with him.

If you hate the guy in the left seat, it’s hard to fly safely.

At that point, he is quietly interviewed by management who endeavour to find out more about his personality. The riot act may be read to him on the basis that unless he gets the message that he should change his ways, sterner action may be taken. Check pilots of this type of character may be taken off checking duties.

On the basis that all first officers cannot be wrong, then this policy is an excellent way of recovering harmony on the flight deck. With a large airline the system works well but obviously is more difficult to administer with a small operator where fewer crew numbers mean less flexibility.

I consider myself fortunate that I was blessed with kind and gentle flying instructors in the vital formative hours of ab initio training on Tiger Moths. Forty six years on, I still remember the quiet, well mannered gentleman that sent me off on my first solo after 7.5 hours. His name was Bill Burns, the flight safety manager of QANTAS airline. Bill had been a squadron leader in the Royal Australian Air Force during the War, and it was he that encouraged me to apply for the RAAF.

Again I was fortunate to have another gentleman instructor for my RAAF basic flying training on Tiger Moths and Wirraways. He was Flight Sergeant Vernon Jackson who patiently taught me how to navigate, to do safe crosswind landings, and barrel roll around clouds. When I hammer headed out of botched stall turns or held off too high, his quiet admonishment was given with humour and tact and I was grateful for this.

On to the final stage of advanced flying training at the RAAF base at Point Cook, and there I was rostered to fly with the flight commander Squadron Leader Caryl Noble, affectionately known as Nobby Noble. Nobby was a decorated Mustang pilot, who had fought against the Luftwaffe in Europe and had just returned from the Korean war.

This was my first flight at Point Cook, and this was also the first time I had landed on a runway – all my previous flying had been on all over grass fields. It was a cold windy winter day and Nobby asked me to demonstrate a crosswind landing. At that stage I had around 100 hours in my log book, with 60 hours on Wirraways.

With the wind at 20 knots across the runway I felt it would be a downright disaster in the Wirraway, which was a vicious swinging beast even in calm weather. I timorously suggested that he show me a demonstration landing as I was unfamiliar with the aerodrome. Landing from the back seat of a Wirraway in any crosswind was really Air Force Cross material, but Nobby did not hesitate. Unfortunately he held off too high and the left wing stalled first. There was clash of wing tip on runway and we were fortunate not to ground loop. As we taxied towards the tarmac with the left wing tip bent upwards, Nobby said cheerfully; “You were right, Laming, the wind was a bit too strong”.

The good ones are priceless; the bad ones can take all the fun away.

Unfortunately for me, Nobby was heavily tied up with administrative duties as the flight commander and was unable to fly with me again. Instead I met the first of several instructor pilots, both civil and military, who are listed in my little black book entitled “Bastards That I Have Known.” These types exist in every work place and in aviation have caused careers to be ruined and many sleepless nights of self doubt.

Sufficient to say that this particular chap was a non stop screamer whom it was impossible to please. The term Stockholm Syndrome had not yet been coined when I flew with this fellow, but I was shocked to find myself feeling absurdly grateful when I received a gruff, “Not a bad landing, Laming,” after continuous verbal battering in the air. His first name was Ted and he wore an iron grey moustache, walked with a cocky gait, and shouted orders like an Army sergeant-major. Ted was a Flight Lieutenant and had spent most of the war years as a flying instructor. God knows how many young trainee pilots he had scrubbed.

He certainly had me terrified, and in later years when I too became a qualified flying instructor, it was through him I learnt how NOT to instruct.

Twenty five years later, I came across Ted at the bar of an Officer’s Mess in Melbourne. He had long since retired and was a lonely irritable old man who used the Mess as his club. He was slightly drunk when, feeling guilty about my abiding contempt for his type, I introduced myself as one of his former pupils. He looked at me through rheumy eyes, not knowing my face, then shook my proffered hand and said in slurred tones; “Nice to meet you lad, and tell me – what was I really like as an instructor?”

I did not have the heart to tell him my real thoughts, but instead assured him that he was indeed one of the best…

He seemed happy with my reply and I never saw him again.

From Africa to America in a DC-3
9 replies

The world needs aviation – how flying keeps us grounded