Blog - Latest News
You are here: Home1 / Article Archive2 / I Can't Believe I Did That3 / The rockets’ red glare: a July 4th landing to remember 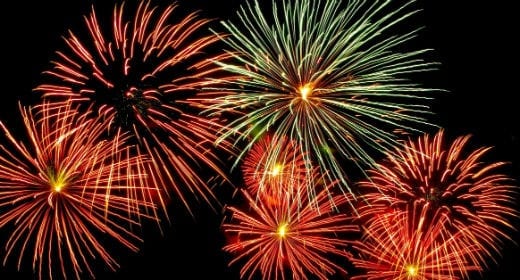 I was at Lake Tahoe, California, at the time. My telephone rang and, when I answered it, the caller identified himself as John Robinson. He told me that he had heard that I had a few flying hours in Cessna 180s, was that correct? I told him that I had and, more than that, I considered the C-180 to be one of the world’s finest load-carrying taildraggers.

John told me that he had recently bought a nice Cessna, registered as N2956C, but that he didn’t have a pilot’s license and, further, had never been off the ground in the left seat of any airplane. Though I found that pretty strange, I didn’t comment.

The Cessna 180 is one of the best taildraggers ever made.

He asked if I’d fly him to San Diego to visit some friends there. I told him that I’d have to first inspect the airplane, and then take it for a check ride. After that, and if all went well, I’d be happy to perform that flight with him.

Since this was to be a check ride, I flew alone of course. The plane was equipped with the old crosswind gear, which I didn’t like much, mostly because that sort of gear is trouble during Alaska’s beach operations. Still, the ride went smoothly and, upon landing, I told him I thought he had a great airplane and I’d be happy to fly him to San Diego whenever he was ready.

So, on a bright and sunny Thursday, June 13, 1965, we lifted off, climbed to cross the high ridges of the Sierra Nevada Mountains to the east, and set a course for San Diego — Oceanside, actually. We worked Approach Control on 127.3, and then the Camp Pendleton control tower on 126.2. The flight had taken us three hours and 40 minutes. The return flight that same day took slightly less at three hours and 25 minutes, and both flights had been smooth and uneventful.

John and I made several more flights in the next few weeks. Such places as San Francisco and Placerville, a fun airstrip on a rather sobering little ridge.

During the first week of July, John called to ask if I could fly him to Vancouver, Washington, on the Fourth of July. He wanted to visit his parents there, and assured me that there was plenty of room for us both to overnight at his parents’ home. I reminded John that we would have to be off the ground before two o’clock in the afternoon of the Fourth in order to be sure we would arrive in Vancouver during daylight hours. I’d never been to that small strip and didn’t know the particulars of the general area. What I did know was that it lay on the north side of the impressive Columbia River, and at the west end of a series of boat repair and storage facilities. I presumed that these were in the shape of the old Quonset huts.

What with John’s foot-dragging, we didn’t get off the ground at South Lake Tahoe’s small airport until after almost three o’clock in the afternoon. Well, that would mean a night landing on a strange grass strip, but my years as an Alaska bush pilot had conditioned me for such unknown conditions. We often flew to places we had never seen, and sometimes even in the dark of night. And oft times in some rather scabby weather, for which Alaska flying is notorious.

The airport at Vancouver, now paved, is surrounded by obstacles.

We flew one hour and 40 minutes to Lakeview, where we topped off the tanks, and then proceed direct to Vancouver.

Vancouver had neither a local radio nor control tower, so I knew I would be under control of Portland Approach Control. I also knew that there was a serious departure corridor from PDX, and I would have to stay away from, or below, that corridor.

Approach reiterated what I already knew: Vancouver lay immediately adjacent to the river, was an uncontrolled grass strip, was at the west end of a series of boat facilities, and that there was a bridge across the Columbia close by to the west of the little strip. I would be landing to the west, and I sure didn’t want to execute a VFR missed approach in the dark with that bridge directly ahead of me.

Portland Approach also told me that, “There are some fireworks scheduled for somewhere around the airport there.” I looked, but could see no pyrotechnics, and presumed that they had either been completed or would be torched off a bit later.

I found the Columbia River directly ahead, and was soon flying well below the Portland departure corridor. Turning down river, I very soon saw the string of boat facilities below and set up for the landing. I could see the river clearly beneath the left wing, and was setting up for the very dark area directly ahead, knowing that void had to be our airport.

Sliding quietly past the last of the Quonset buildings, and with 40-degrees of Cessna’s barn door Fowler flaps hanging out, I was pretty well committed at that point. I had the landing lights on of course, for whatever good they would do. I was ready for the touchdown, probably three or four feet above the grass runway, when the whole world exploded directly in front of the heavy Cessna. Those predicted fireworks weren’t “somewhere around there,” they were smack-dab in the center of the runway!

Is this what they meant by “pilot-controlled lighting?”

Two fire trucks, myriad cars and pickup trucks, and I don’t know how many fleet-footed runners scattered ahead of the committed little aircraft, and things happened much too quickly for me to either count or to estimate their numbers.

I was both surprised and most thankful that we hadn’t hit anyone nor anything on our short rollout, made much shorter by generous use of brakes and shots of power across the tail to keep us from tipping up. Taxiing to a place where we could tie down was something of an anti-climax, to be sure.

It’s often been said that a good pilot plans his flight and flies his plan. I hadn’t done that. I certainly knew that our late departure would set us up for a dark of night arrival at Vancouver. My Alaska experience had simply left me a little too confident, even complacent, a situation I certainly knew to avoid.

Would I make the same flight again? Nope. That landing had more luck than skill applied to it, and only Providence allowed me to escape some very serious consequences that night.

That flight happened 50 years ago, and I’ve logged many more night flights since then. But I’ve always planned each flight, and have flown the plan since that very sobering night at Vancouver. My sincere advice is that you do the same.

Comparing your dreams – why owning an airplane is worth it