Blog - Latest News
You are here: Home1 / Article Archive2 / I was there3 / Is that legal? Clearing a path through the fog 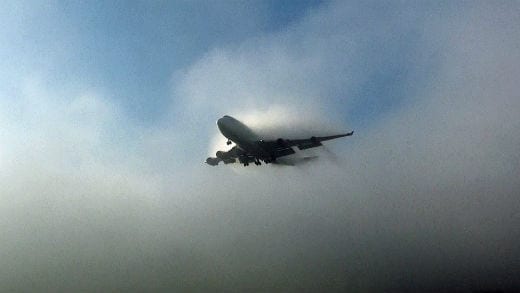 They say that in every life a little sunshine will beam on occasion. Freight dogs learn quickly to take advantage of every streak of light they can find and they usually don’t tell anyone about it until well after the fact, because they’re never quite sure if what they’ve just done is legal or not. If you can’t say (or do) anything nice – or lawful – don’t say anything at all?

Dulles is a fine airport – except when those runways are shrouded in fog.

At certain times of the year (especially early fall), radiation fog forms over Dulles Airport in northern Virginia on a fairly regular basis. You can pretty much count on it during the hours just before and just after dawn. And this particular morning in mid-September was very regular – fog had lowered the visibility down runway 1R to less than one-thousand feet (RVR). If you were not Category II or III capable you didn’t make into Dulles that morning – unless….

We arrived over the airport from Newark, New Jersey, just about the time the sun started to wake up in the east, and we were instructed to hold at the outer marker on the localizer for the runway 1R ILS at 4000 feet; that point is now WAXIN fix. This was my first encounter with the fog phenomenon at Dulles, and I didn’t know how long to expect to hold. We had enough fuel to circle for a couple of hours in the venerable Shorts 330 we were flying, but we were hopeful that the fog would begin to lift or dissipate within the hour; however, the approach controller didn’t share our optimism. We still had another leg to fly down to Salisbury from Dulles, and our eyes were already bloodshot, so this situation was not good at all. Round and round we went.

In a while, well after sun up, a Trans World Airlines 747 arrived in the area and promptly began his coupled-autoland-approach to the runway we were holding for: 1R. The fog was still just as thick down the runway (RVR 600), so we observed with inquisitive minds – wondering what the outcome would be.

Just as he passed abeam our position on his final approach, I turned our old Shorts around to track the inbound course, and we watched carefully as “T-Way” disappeared into the mist – ahead and below us. In only a very few moments (shortly after he should have crossed the threshold), both of us were amazed to witness the fog on the runway begin to break up and vanish before our eyes.

We make our own VFR…

Prior to passing over the outer marker and beginning the next outbound leg of our holding pattern, we actually saw the big 747 rolling out on the runway. I keyed my microphone and inquired about the RVR as it was indicating at that precise moment. “RVR more than six-thousand” was his enthusiastic reply. I imagine right about then the tower controller must have thought the same thing that my first officer, Burt, and I were thinking.

We gave it about another minute, then we called again to ask about the RVR. The controller relayed the bad news: “RVR now six-hundred.” It was discouraging news, but at least we now had knowledge of a window of opportunity that could work for us if we played our cards right. And as tired as we were we opted to gamble that morning.

To make a long story short, we coordinated with the approach controller and the tower operator to get us turned onto the ILS for runway 1R immediately behind the next arriving heavy aircraft – waving wake turbulence separation. We stayed high and fast right on the heels of a Lufthansa 747 and touched down on runway 1R in almost beautiful VFR conditions that lasted no more than sixty seconds.

Before we could exit the runway, the fog closed in on us and rendered a somewhat difficult taxi across the field to the freight terminal. I wish I had taken a photo of the astonished look on the station agent’s face as we pulled up on the ramp in that “sky pig” that only had two old nav/comms, no autopilot, no radar, no radio altimeter, no GPS, no nothin’. Needless to say, he asked how in the world we got in.

Our reply? “Magic.” In so many words…

5 key flying lessons – some things that had to be learned the hard wa...
Scroll to top