Blog - Latest News
You are here: Home1 / Article Archive2 / I was there3 / Electrical failure: time to improvise, adapt and overcome 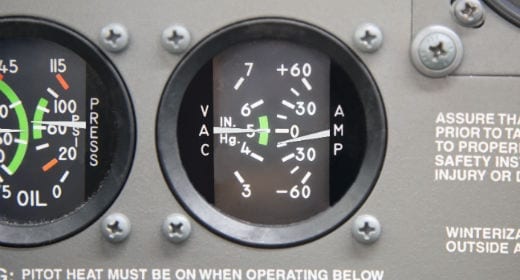 Heartbreak Ridge is one of my favorite Clint Eastwood movies. Clint plays a grizzled old Marine gunnery sergeant who is assigned to a reconnaissance platoon full of undisciplined misfits. He whips them into an organized fighting unit which then finds itself on the island of Grenada during the U.S. invasion which actually took place during the Reagan years. During their training, he exhorts them to “improvise, adapt, and overcome” because combat will be full of surprises and setbacks.

I had all four seats filled as we were winging our way westward to Santa Fe, New Mexico, at 8000 feet on top of a cloud deck. The ride was smooth and all seemed well with the world. It was then that I noticed the ammeter needle flicking back and forth between “discharge” and neutral in a steady rhythm. This did not look right. The fluctuations would stop when I turned off the tail beacon, but the needle stayed on the “discharge” side. It did not take long to realize that the alternator was not keeping up with the electrical load and the battery was discharging. We needed to get on the ground fast.

Press on or time to land?

Just the day before, I had been talking with a fellow pilot about the management of risk when flying. Most pilots can cope with one or two things going wrong if they land as soon as possible. Very few pilots can successfully deal with three or four things going wrong when they choose to press on instead of landing right away. It’s called the “accident chain.” This was playing in my head as I debated a course of action. Prudence won out and I informed ATC that we were going to divert. Of course the controller wanted to know why, so I told him. Borger, Texas (BGD) became our new destination.

After extending the landing gear, I noticed that all of the annunciator lights on the autopilot were flashing. Base leg was not the time to ponder that anomaly, so I forced it from my mind and concentrated on the landing. The first thing we learned after shutting down was that there was no repair service on the field. The next thing we learned was the FBO had a very nice lounge area with a flat screen TV. My passengers were happy to wait there while I sorted things out. Probably two hours were spent calling various places in New Mexico to see if there was a non-towered airport that had both repair service and rental cars available.

I came up empty and decided that Santa Fe was going to have to wait until another day. By that time a huge thunderstorm had formed just east of the field, began dumping prodigious amounts of hail, and was the feature story on the Weather Channel. Not wanting to be a part of that story, we headed for a local hotel as daylight was fading.

The next morning the airport was fogged in. One of my passengers had a business trip to Colorado scheduled two days hence so we needed to get moving one way or another. The best plan of action seemed to be to rent a car at the Amarillo airport and drive home that day. I would then ride back to Borger with my friend and get dropped off since he was going to be driving through there anyway. The problem was getting to Amarillo. We had been loaned a courtesy car for our overnight stay but it was not allowed to leave the county. It was then we discovered the extent of the true customer service that Hal Shevers talks about. One of the linemen offered to drive us to Amarillo in his personal vehicle. We gratefully accepted and were soon on our way home.

I spent the next 48 hours thinking about flying the plane cross-country with little to no electrical power. The weather was going to be iffy because the same low pressure system which produced the thunderstorm was still going to be hanging around. After discussions with my mechanic, we had decided the landing gear should be left down since it was electrically controlled. That was going to be 20 knots less airspeed. However, having three now-empty seats meant I could fill the tanks. There would be over five hours of fuel available for a 2.5 hour flight. Navigation was going to be by magnetic compass and iPad.

We had a nice drive westward while I scanned the sometimes cloudy skies above. It looked like a no-radio VFR flight was doable. Upon arriving back at BGD, I had the tanks topped off and checked the radar summary. By now another round of afternoon thunderstorms had kicked off and they were making their way eastward. I was going to have to time my departure so as to miss the storms, but get to my maintenance base at Muskogee (MKO) before dark. It was going to be close.

You can fly without these, right?

After waiting about an hour, it was time to go. The line crew extended a helping hand yet again and gave me a jump start from a power cart. At first I was able to cruise at 5500 feet MSL but the clouds lowered with the terrain as the trip progressed. I flew for a while with the master switch turned on but later noticed what had to be erroneous readings for cylinder head temperature and fuel quantities, so I turned it off. The avionics were never turned on. This was an education in exactly which instruments did and did not require the electrical system to operate.

At about 33 miles from my destination, I was down to 1800 feet AGL beneath an overcast but could see clear skies just ahead. I started thinking I had it made when I noticed movement out of the corner of my eye. A Cirrus was headed in from one-quarter mile away at my 9:30 position – barely in front of the left wing – and perhaps 100 feet above. I have no idea how long it would have been visible had I been looking off to my left, since I was scanning for traffic more or less straight ahead. It was too late to do anything about it. The Cirrus whizzed past behind me and I never saw it again. One can never look outside too much when flying.

Soon it was time to set up for the landing. Upon selecting flaps 30 degrees (the master switch was back on), they went to 25 and stopped. The battery was dead. I landed with what flaps I had and taxied to the hangar with them stuck in that position. It felt good to be on the ground again. I had a half-hour of daylight to spare.

The old alternator was indeed worn out. The airplane is already fixed and back where it belongs. Theoretically we could have continued on to Santa Fe if I had been carrying a portable aircraft communications radio. Last year at Oshkosh I attended a seminar titled “Breakdowns Away from Home.” The speaker advised doing the minimum required to safely get your aircraft back to its maintenance base, so I ended up taking his advice. My wife had texted my son informing him of our predicament when we were stranded in Borger. His reply: “Improvise, adapt, and overcome!”

Go or No Go: is there any way through this line?

A good idea at the time: scud running in the mountains of Papua New Guinea
Scroll to top