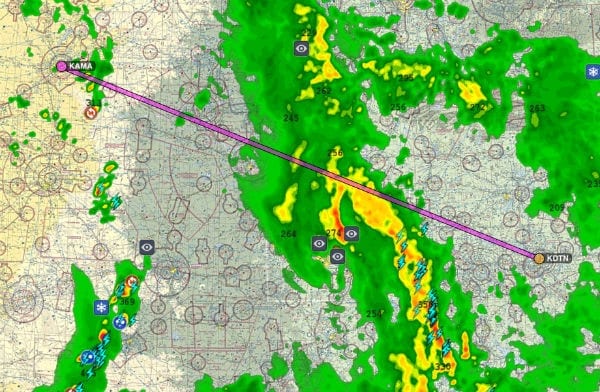 Your 1981 Piper Aztec and you have been through a lot in 10 years and 3000 hours, including plenty of single pilot IFR trips. But today is going to be a test for both of you – your proposed trip home from Shreveport, Louisiana to Amarillo, Texas is filled with rain, low ceilings and some convective activity.

The airplane is well equipped (besides the two engines), with deice boots, dual WAAS GPSs, datalink weather and a good autopilot. It also has an on-board radar that, while older, does provide some real-time weather information. You are current and confident in the airplane, and regularly fly IFR in the Aztec. The trip should take about two and a half hours.

Here’s what you find at 20:50Z (3:50pm central time on May 13) when you fire up your iPad. Read the weather report and tell us if you would go or cancel the flight.

There’s a pretty solid line of rain stretching north to south across Texas, slicing your trip in half.

The surface analysis shows a low pressure system to the west, with a weak warm from sagging across north Texas.

Convective weather is obviously the key concern today, so you compare the radar overlay in ForeFlight to the raw NEXRAD image. That line looks pretty solid – are there any holes to the north of Dallas?

The infrared satellite shows relatively clear skies behind the weather in Amarillo, but there are thick and well-organized clouds across most of Texas.

The visible satellite picture shows that some of the weather south of Dallas has some noticeable vertical development.

Is any of this weather going to get better? A look at the prog charts suggests that it will, but not any time soon. First, the 12-hour prog chart.

The 24-hour chart shows the low moving off to the north, but with some lingering showers and storms throughout Texas and Oklahoma.

Convective SIGMETs are out today, all around your route.

Next you review the AIRMETs for icing, which looks like it won’t be a big issue today – at least at your typical altitudes of 8-12,000 feet.

Turbulence AIRMETs are all in the flight levels along your route.

Now it’s time for a look at what other pilots are saying today. First up are the Pilot Reports for icing.

Then it’s on to the turbulence PIREPs, which are mostly clear.

Finally, you review the other PIREPs, which don’t add a lot of detail.

The weather at your departure (KDTN) and your destination (KAMA) isn’t your primary concern, but it’s still wise to review conditions. Both are showing marginal conditions, but visibility is good.

Next, you look at the Terminal Aerodrome Forecasts (TAFs), which show continuing marginal conditions.

It’s decision time. The airplane is fueled and pulled up to the front of the FBO, and your wife is expecting you home tonight. But you’ve been flying long enough to be prepared for some bad weather, so you have an extra change of clothes in your bag. Time to load up and pick through the line of weather? Or time to find a hotel?

Home is where the hangar is