Blog - Latest News
You are here: Home1 / Article Archive2 / I was there3 / Smoke on the water: a long, summer cross country 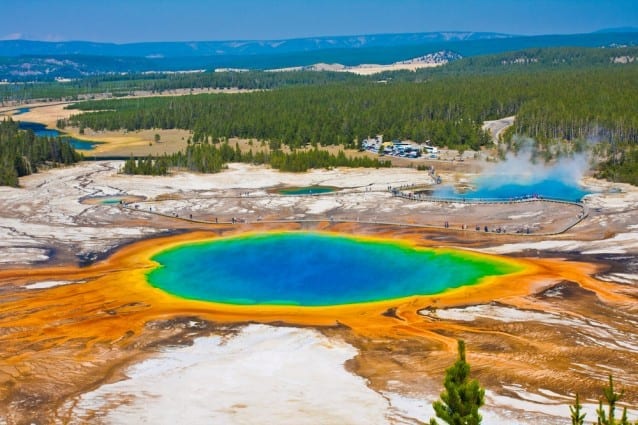 It was only after an extended period of dithering that we finally decided to fly the Skylane RG to see our daughter in Seattle. The occasion was my wife’s birthday (I will not say which!). The plan was to fly from Oklahoma to Colorado Springs first and spend the night, which we did. There are several hotels right by the airport, so we did not have to rent a car. The next morning the weather over the Rockies was cloudy, but slowly clearing. We cooled our heels at the FBO while I kept checking the conditions, both on the internet and by looking outside. The direct route to Seattle from KCOS goes right up over the Continental Divide near Breckenridge. I wanted to make sure the way was reasonably clear before launching.

Having convinced myself that such was the case, we loaded up and took off. It was a steady climb from the airport until well into the mountains when we leveled off at 13,000 feet for the ridge crossing. I had been through this area before and I knew the lay of the land. I also had a specific path laid out on the iPad and programmed into the panel-mounted GPS. Nearing the Divide, clouds became more numerous and widespread. I started to wonder if it was time for Plan B. The important thing was being able to see straight ahead, which we could. The clouds suddenly parted as we crossed the pass and broke out into clear sky beyond. It is a dramatic sight to see clouds hugging the side of a mountain range, more so when they are behind you.

Flying over the mountains makes you think very hard about the engine out front.

The rest of the way to our fuel stop in Idaho went well. There were bumps over the mountains in Wyoming, but no clouds. On approach into U02 at Blackfoot we heard another Cessna call in. Realizing we were in close proximity to one another, the other pilot graciously slowed down to provide increased separation. We never saw him until we were on the ground. It pays to use the radio.

The reason it was hard to see other airplanes was the increasing smoke from the many wildfires burning in the western United States. A high-pressure system was holding the smoke in and keeping the rain out.

After departing Blackfoot, we made our way across the Salmon River mountains. This is a wide area of very rugged terrain. Forest Service airstrips are scattered here and there across deep, narrow valleys, but that is not much comfort. One really thinks about the options should the engine go quiet. Halfway across the range we came upon a large strip mine that offered a possible emergency landing spot – as long as you did not go over the edge!

The smoke thickened as we approached the Cascades from the east. Our destination (KRNT) was at two miles of visibility due to smoke, so we picked up an IFR clearance at Yakima to get into the Seattle area. Renton was using Runway 34, which does not have an instrument approach. I asked for a contact approach. Just before leveling off at my assigned altitude during the descent, the controller issued an explanation as to why ATC could not grant a contact approach.

I was distracted, descended below my target, and immediately corrected. (Note to self: fly the airplane first, listen to ATC second.) We had a tour of downtown Bellevue on the long way around to the approach for Runway 16. The GPS was set up for radar vectors to final when the controller sent me to the intermediate fix instead. OK, time to delete and re-enter the approach. I actually received a thank you for my patience when Seattle Approach handed me over to Renton Tower for our circle to land on Runway 34.

As we taxied to the FBO, I noticed the ramp space seemed much smaller than the last time I was there. Upon inquiring, I found out that Boeing bought up every available square inch of the airport, including some of the FBO’s ramp space. 737s coming off the production line now filled what used to be light airplane parking. I guess it is a sign of the times. I parked the Cessna right next to a 737MAX test aircraft.

It so happens we were there for the annual Seafair, which featured the Blue Angels performing over Lake Washington, followed by hydroplane races. The Angels are always worth seeing in my book, but this time was going to be different. The smoke from the wildfires in the region continued to hang heavy in the air as Sean Tucker thrashed about in his Oracle biplane. Sean was followed by an impressive demonstration of the F-22 Raptor. What you could see of it, that is. Then it was the Angels’ turn. They came in low over the water with smoke on. They kept on going while the smoke just stayed there. It became thicker with each successive pass. They were limited to their low show that day because the visibility was so bad.

The flight home started out much the same as the flight out. We had to file IFR and did not top the haze layer until 8400 feet MSL. It was a smoother ride this time as we crossed the Idaho mountains, but the visibility was worse because of the sun angle and a close-by wildfire. The planned fuel stop was KSMN (Salmon, Idaho) and the arrival required a circle down into the valley while losing 5500 feet of altitude. The self-serve avgas had two pumps: one with gas in the storage tank and one without. Guess which one I tried first.

A check of the weather showed a big thunderstorm blocking our exit out of the mountains at Togwotee Pass, so it was time to plot a new route. I elected to deviate north to Sylvan Pass. This route took us right over Yellowstone National Park. The heavily loaded airplane was struggling to climb to the desired 11,500-foot altitude, so I briefly considered staying where we were at 10,500. Air temperature does make a difference, especially in the summertime Rockies. The rules say we were supposed to be at 11,500. However, this was mountainous terrain where the height above ground often varied to less than 3,000 feet. Not long after, yet another Cessna came by going the opposite direction at 10,500. I coaxed our old bird up another 1,000 feet.

The Grand Prismatic Spring at Yellowstone is a sight to see from the air.

Yellowstone from the air was a real treat. We could easily see the Grand Prismatic Spring to the south. A thunderstorm was dumping rain on the north side of Sylvan Pass, but the storm stayed put and we had no problem getting past it. I felt a certain amount of relief as we exited the mountains near Cody, Wyoming. There were more challenges to come.

Thanks to the Stratus ADS-B receiver and iPad with ForeFlight, I was able to keep an eye on the scattered storms continuing to develop along our route of flight. The original plan called for the next fuel stop to be at Pine Bluffs, Wyoming. Our northward deviation now made Kimball, Nebraska a better choice. Except there were a pair of thunderstorms up ahead: one over Kimball and one to the east over Sydney. They were not part of a squall line, and sufficiently far apart that I could squeeze between them, but now I was on Plan C. What to do?

George the autopilot kept the shiny side up while I considered the options. I did not want running out of gas to be one of them. Calculations showed it was possible to get to Imperial, Colorado, with the minimum reserve. So Imperial it was. My wife got noticeably nervous as we approached the pair of storms that were by now looking quite impressive. I pressed on while maintaining an equal distance from both. The ride stayed mostly smooth. Coming around on the south side of the cell to our left, we saw long fingers of cloud. They stretched out for what looked like miles and fed up into the core of the storm. I had never seen anything like it. I later learned they are “inflow bands.”

We dropped below a cloud deck on the approach into Imperial and landed with no further issues. There was a fellow in the airport lounge totally engrossed with watching a movie on his laptop. If he was there to provide customer service, it was not happening. No matter, I prefer to pump my own avgas anyway. Airplane tanks full and human tanks empty, we took off for the third leg of the trip. We were all glad to arrive safe and sound at home base well after dark.

It took me two days to recover from this journey. Flying is fun, right? Yes, under the right circumstances. It can also be a challenge, as this story illustrates. Long cross-country trips in a small airplane can be a breeze, but only if that breeze is a healthy tailwind and the sky is clear. We had about twenty knots of headwind both going out and coming back. Further proof that life is not fair. One takeaway is that I really do not want to fly more than two legs of four hours each in a single day. The other is that if it takes more than a day to get there via small plane, I will “bite the bullet” and take the airlines.

Deep Purple fans, you know who you are.

70 years ago: a first lesson and a first article