Blog - Latest News
You are here: Home1 / Article Archive2 / Technique3 / All runways are the same (sort of) 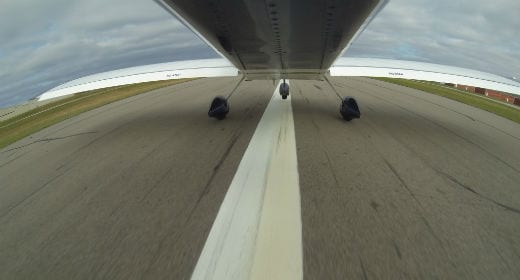 The biggest problem I used to have as a pilot was landing at different airports. I used to say, “I hate this airport; the runways are different…” Strange, but I never have problems parking my car in a different lot, with spaces that face a different direction than my normal office lot. I still have to put the car in the middle and pointed straight!

That nosewheel really likes the centerline – anywhere else and you’re doing it wrong.

Thinking back after many years, I’ve learned five things that have made landing at unfamiliar airports much easier. It doesn’t matter if the runways face a different direction or are a different size than your home airport. All runways are the same as far as landing technique. The visual approach never changes.

For every runway the following is true:

To land centered with the nose pointed straight, nothing will help more than experience and practice. I didn’t become really “good” or consistent until after my commercial certificate and several hundred hours. It’s pretty common for a new student to complain that, “I make it look so easy.” It is easy after 5,500 hours and I promise it will get easier for them, too. They just need a little time and experience.

A stabilized approach in a Cessna 172 might be the following:

The above is an example that works well in most Cessna 172s, but remember to always consult your specific pilot’s operating handbook.

Are the runway numbers moving up? Time to adjust glidepath.

To visually judge your glidepath, stare at the runway numbers in your windshield and note where they are vertically. For example in a Cessna 172, they might be centered vertically with the glareshield always below the numbers. This is important to keep your speed constant as well. If your nose comes up during the approach, you are slowing down. To judge your glidepath, watch if the numbers appear to move up or down. If the numbers move up in your windshield you are low; if they move down you are high, if they just get bigger, you are on a stable glidepath.

If you are getting low, add power and hold the nose down to maintain airspeed. Never try to fix a low altitude by pulling up! Remember the famous quote while landing, “Low and Slow is No Bueno!”

If you are going high, reduce power and hold the nose from falling and increasing your airspeed. This can cause you to float and use up more landing distance.

You have to use the exact same airspeeds, configuration, power setting, and crosswind corrections you would on any runway and focus your vision on the exact same touchdown point. It’s only when you focus on how things around the airport look different and stop flying the basics that it becomes “hard.”

Here’s where people tend to get in trouble: a different runway width, direction or a different airport can cause people to stop focusing on the four basics listed above. There’s a really popular airport at Catalina Island (KAVX) on top of a small mountain where the runway is bent in the middle (elevation change) and with cliffs on three sides. Ask almost any SoCal pilot and they will tell you how hard Catalina is to land at. I remember the first time I landed at Catalina and how all I could look at was the cliff before the approach end of the runway. I was so fixated on the cliff that my approach was 300 feet high and 15 kts too fast! It’s easy to do, believe me. If I had used the same constant approach speeds and configuration and visual aiming points, it would have been a much better landing. Accidents only happen when people lose a stabilized approach.

Yes, there are slight differences in the touchdown and braking on short and soft runways, but the overall concept is always going to stay constant. You may need to come in slightly faster with less flaps for more control in a crosswind.

Mountain flying is more similar than different; just remember to fly the same indicated airspeeds. However mountain flying go arounds may need to be started earlier than normal.

The most important thing I ever learned early in my flight time was the go around. I had an older instructor who wouldn’t let me land unless everything was almost perfect on short final. Two hundred feet too high and 10 kts too fast: “Go around!” he would yell. I was pretty convinced he wasn’t ever going to let me land the plane on some lessons. When I asked why, he gave me a quote that I’ve never forgotten and I still use today when I teach. “Never try to save a bad landing approach, the pros go around and do it right.” Ask any airline pilot about how they land and you will hear the same answers over and over again. It’s always about flying a “stabilized approach” or they go around.

Try flying with a constant indicated airspeed, configuration (flap settings), and power settings on every landing and your landings will get easier. Focus on looking outside at the numbers and always be ready to go-around. This really helped me and I bet it will help you too.

What are your best landing tips and tricks? Add a comment below.

The most important person at your airport

The three keys to flying safely
Scroll to top