Blog - Latest News
You are here: Home1 / Article Archive2 / I was there3 / In the middle of a Cold War, Russians fish in the North Sea 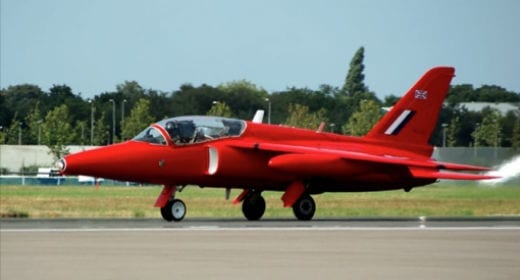 There was light chop on the sea and the salt spray did not hinder my forward vision too much. The curved windscreen made rain and snow encounters a non-event… not like the flat windscreen of operational fighters. They have “gun-sight orders” reflected on them but always had flat screen vision issues to deal with in weather, particularly in rain, sleet and snow.

The Gnat – in this case it was to be a missile, not an airplane.

I was over the North Sea having just taken off in a Royal Air Force (RAF) Folland Gnat from Ballykelly (an RAF base on the Northern Coast of Ireland) and now tracking for the NATO fleet operating in the North Sea.

I was comfortable at 300 knots and 100 feet to stay under the radar and the aircraft was stable for hand flying at low altitudes, but I didn’t want to test my judgment over water much lower. Many a pilot has misjudged a water surface and made a brief but tragic contact with the sea surface with the lure that really low flying can attract.

Working as the Australian exchange officer at the RAF Central Flying School, now based at RAF Kemble, my brief was to position to Ballykelly and fly missions as directed by “Ops.” Later I realised why some might find the tasks somewhat daunting and the exercise not being considered an attractive one by some… but it was given to the unsuspecting Australian anyway as I suppose I knew little of the risks that could be encountered.

The project was a week-long exercise and as I had not spent time in Ireland and not had some operational flying for some time, I relished the thought.

The North Sea can be treacherous for survival and unless you wore an immersion suit your survival time in the water, having ejected from a single-engine aircraft, would not be very long at all and, at that stage of my career, I had not given too much thought to the possibility of bird strikes either.

But it was early October 1966 and the weather was CAVOK so there was no need for an immersion suit, so for now, life could not be better.

I had previous experience in RAAF Fighter Squadrons and was familiar in the use of air-to-air missiles from tours in the Australian Sabre’s sidewinder-equipped aircraft. However, this mission was different where my aircraft was, itself, to become a “missile and see if they can shoot you down,” was the brief by the squadron Intelligence Officer.

Watching the TACAN to set up a strafing run (and hoping the good guys don’t shoot).

“They” were a NATO flotilla of French, British, Dutch and German ships exercising in the North Sea and I was to be the simulated Russian ship-to-surface missile. The “missile” profile was to fly the first 100 miles to the target at 100 feet and 300 knots; slowly climb to a peak attitude of 3,000 feet and accelerate to Mach .9 – 540 knots. Upon arrival at the fleet, I was to do a low angle single pass strafing run and then return.

The position of the fleet I had calculated from the latitude and longitude given at the briefing and I programmed the bearing and distance information into the offset computer of the Gnat’s TACAN system.

Distance out was 155 miles and at 300 knots for the first 120 miles would give me a time for the first segment of 24 minutes. Another 10 miles for the acceleration at an average of 420 knots gave me another one and half minutes and the final run in at 540 knots I would be on target in three more minutes.

The TACAN DME had unlocked some time before but at the DR time for 35 miles-to-go I set the thrust to 100%. The Gnat was a supersonic aircraft – not Mach 2 – but was easily pushed to .9 Mach in level flight and in a shallow dive could do the “sonic runs” and supersonic manoeuvring we needed to do for the instructor training courses.

Firstly though, I had to find the fleet and trust my DR navigation backed up by the TACAN computer and at the low altitude the furthest I could see was the horizon – just five miles away.

The aircraft acceleration, at low level, was superb. We have all heard of “broomstick flyers” and although I don’t claim to be one of them, in the Gnat that’s just how you felt at times.

The long 12-foot pitot tube protruding from under the aircraft’s nose, where you felt you had it straddled and in direct view, well in front of the aircraft; the anhedral wings that joined the fuselage at almost shoulder height; the responsive powered controls and excellent front seat visibility – made you feel at one with the aircraft – and almost a “broomstick flyer.”

Quite a fishing boat.

DR at 25 miles to run I eased Gnat XM-91 gently into a 1000 ft/min climb. I had three minutes to make 3,000 feet before I reached the target and it was here I became apprehensive as I still could not see any part of the “flotilla,” but then suddenly, through the salt-sprayed windscreen, I saw the fleet, dead ahead, spread over miles of ocean and I estimated just four to five miles ahead.

I breathed a sigh of relief and selected the biggest ship I could see and started the simulated attack. I am not sure whether I was shot down or not but I can certainly attest to the fact that at Mach.9/540 knots diving straight at a target on the sea at such a low altitude, things happen lightning fast.

From memory I pulled out of the dive at about 300 feet and 6G and throttled back to idle into a wingover to slow down and reduce the turn radius for the 180 degree turn and then came a sight I had never before seen or thought about.

It seems Russians like to fish in the North Sea, particularly when NATO exercises are on. And it comes as no surprise now to have identified no less than three large fishing trawlers bristling with aerials and radar about three miles behind, and in full view, of the fleet.

At the debriefing when I told of my discovery, the Intelligence Officer said, “Oh yes, old chap, they are always there. We feed them lots of rumours and false ideas. Helps with the spy stuff you know.”

“Welcome to the real cold war,” I thought and I decided not to tell him of my final pass as I thought I had better just wait and see.

So now I had a decision to make. Do I simply meander off back to Ballykelly or do something to let the Russians know we know what they are on about. I might regret it and maybe cause an international incident or at the least, maybe a court martial, but I couldn’t let the opportunity pass – after all it is not every day those of us who live and fly Downunder get a chance at something like this.

I thought to myself, even if I did get into major strife it would be worth it to show the Ruskies they were clearly under our gaze so…

I completed the orbit and eased the Gnat down to the surface. I accelerated again and at about 100 feet and over 400 knots I wheeled in to do a run over two of the trawlers. I lined two up on the pitot tube, dropped a little lower. A little more thrust. I recall over 500 knots but was mainly looking straight ahead.

Then, as they say in the classics, I could almost see the whites of their eyes for a flash and hurtled over them as low and as fast as I dared.

The mission done, I headed back to Ballykelly. A sedate 360 knots at 500 feet and a comfortable ride home as I pondered the thought of the Russians’ report over the spy network of the day we might have frightened the fish away.

Aviation mentors: getting by (and thriving) with a little help from your fr...