Blog - Latest News
You are here: Home1 / Article Archive2 / I was there3 / Coming down with the aviation bug: why me? 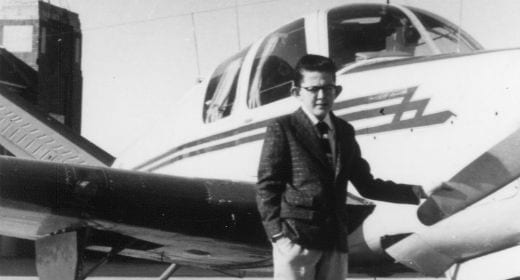 It is a calm, sunny Sunday afternoon, and I am at 1500 feet AGL in the old Chief, cruising south to the Shelbyville, Indiana airport, to practice short-ish field landings on their grass crosswind runway. Looking to my right, there is my regular flying companion, my late father, or my sense of him. I talk to him now and then, but he seldom answers, just looking straight ahead, pale and waxen in the way he was toward the end, but with a slight smile of encouragement.

Today, I want to ask him why aviation came to be such a central part of my thinking and my life, despite my never having made a dime with an airplane, or been an especially skilled pilot, or having grown up in a flying family. But he leaves me to ponder alone.

Texas, 1920. The author’s father is the toddler with the stylish hat. Clearly, there was no aviation safety officer present.

In the old joke, insanity is hereditary: you get it from your children. But in this case, my aviation insanity definitely came from my father. How he got it, I’m not sure, but there are clues. The oldest–and only–picture of my father with both parents and his two half-brothers shows him as a toddler in his father’s arms, about 1920, standing by a WWI biplane, remarkably close to the moving propeller. Did Dad catch the bug then? Or did he get it from Charles Lindbergh, who crossed the Atlantic when Dad was nine years old? I know that many boys of the era fell in love with airplanes then.

Was it in 1935, when Dad was in the CCC (Civilian Conservation Corps), standing in an Idaho fire tower with a Forest Service radioman, when word came that Wiley Post and Will Rogers had died in an Alaska floatplane crash? For certain, when WWII broke out, Dad tried to get into the Army Air Corps, but was rejected because he was 6 foot two and rail-thin. When he finally got a good job, assembling oil-exploration seismographic equipment for Schlumberger in Dallas, Dad started flying lessons in a 40 hp J-2 Cub, and got his private license just before I was born. After two forced landings (not a rare thing in the old Cubs and T-crafts, I am told), Mom said, “You have a child now, enough of this flying nonsense.” Maybe it was that, maybe it was just money, but he quit flying around 1942.

I’ve written here before about how our family car often turned in at the Lubbock, Texas airport after church, how I built rubber-powered balsa models of Champs and Taylorcrafts and Navions and F-86 Sabrejets, flew U-control planes, and how girls and motorscooters and cars ended, or perhaps just suppressed, that infatuation. But through all my growing up, Dad didn’t fly. On those occasions when he got us rides with friends, I always got airsick and usually puked. Perhaps that’s why I never asked for flying lessons as a teenager. There were no aviation magazines lying around the house, and airplane talk seldom came up at mealtime. We were not an “aviation family,” but there was something invisible going on.

Lubbock, Texas, 1955. The author in his 13-year-old Sunday Best, kicking tires at the airport. The public was welcome to roam the ramp freely and peer into any airplane.

Only after I’d left for medical school and my younger brother graduated from high school did Dad announce that he was going to fly again. Many years had gone by, so he took the entire private pilot curriculum all over, got a second license (How? Maybe FAA records weren’t very good in the 1960s!), and began flying regularly. I heard about all this by mail. Mom was a cheerful passenger, and they traveled all over Texas and up to see us in Minnesota. Dad was an early EAA member, bought a Taylorcraft fuselage and an engine, and began accumulating parts to rebuild the plane. On a visit to Texas, Dad took my wife, son, and me to Mom’s home town so I could record interviews with pioneer family members. We traveled in a C-172 on a windy, dusty, choppy day, and his 90 degree crosswind landing scared the crap out of us, though I later recognized how skillfully it was done. Afterward, I wrote Dad a letter explaining why I would never be a pilot. It was a great 9 years of flying for Dad, until he fell into ill health and died at 61.

I wrote here earlier (I Knew They Were Going to Die That Day) about how my father’s death motivated me to get my private license, then an airplane, then my instrument rating; how I met EAA founder Paul Poberezny and became closely involved with EAA, founding the aeromedical advisory council, and writing regularly for their magazine. All this seemed strange and wonderful and completely unexpected. Over just a few years, a loss-driven desire to fly had segued into a purple passion for “all things aviation.” I acquired new friends, found hidden talents, influenced a few things, got to ride in exotic airplanes (antique biplanes, a P-51, AT-6, T-28, B-17, and more). All these things poured fuel on the passion.

These things happened in the midst of a busy–consuming–medical research and administration career, so my aviation pursuits were squeezed into life’s interstices. Once-high flying hours declined steadily as professional commitments grew. A job change led me to sell my old Skyhawk, and a 60-75 hour work week kept me on the ground. Another job change yielded the same pressures, and flying stayed on a back burner. Fifteen years went by without much flying, except in the Great Aluminum Mailing Tubes. As retirement approached, I assumed that my flying days were over, but two key things happened: the coming of the Sport Pilot category, and receiving by email the trailer for a marvelous, romantic film, One Six Right. Late one evening, I viewed the trailer, and tears streamed down my cheeks. I watched it twice more, then went to my wife and told her that “I have to fly again.” The next week, I started looking for a Sport Pilot eligible airplane.

Aviation became a major life focus in retirement, with membership in two EAA chapters, gradually restoring the 1946 Aeronca Chief, reading extensively on aviation history, and spending endless hours thinking about airplanes, aviation people, the FAA, weather, aviation technology, and more. The purple passion returned in full cry. Strangely, though, I haven’t actually flown a great deal, partly because my fair-weather airplane has been down so often, but partly because the act of flying itself may not be the core of my passion.

So, I return to the question I posed to the familiar phantom in the right seat: how–why–did aviation became such an encompassing passion? It was not a constant in my life, no one was selling it to me, I didn’t have flying friends, the busy-ness of life made it inconvenient in many ways, it was expensive, my wife was supportive but not interested… What happened?

In a recent op-ed piece, “Too Late Gives No Warning. If You Have Dreams, Put Them Into Action Today,” Budd Davisson may have gotten to the core of my question. Writing about people who plan to take up flying “some day,” or “after I retire,” Davisson notes that “Not until they actually dip their toes into three-dimensional waters do they begin to realize that aviation is so much more than simply flying. It’s much more than airplanes. It’s a universe unto itself that is its own community and is ready-made to be a thoroughly fulfilling, cradle-to-grave lifestyle.” A community! A lifestyle! Things become perhaps clearer.

Indianapolis, 2011. The author’s oldest grandson, Benjamin, at the controls of the Chief. He appears already to have that dreamy aviator look in his eyes.

In an effort to fulfill a dream of my father’s, I unwittingly opened a door into that universe of fascinating and welcoming people, machines, physics, weather studies, rules, companionship, community, adventure, and constant learning. I was asking the wrong question: the real issue is, why the devil did it take me so long to open that door? I do not regret one minute of time spent on aviation matters, nor do I regret a dollar of the many spent. My main regret is that I did not insist on flying lessons when I was a teenager, feed the passion, and share it with my father when we were both young. Oh, the years I missed! The airplanes we could have flown, the places we could have gone!

Instead, my clock is winding down, and my flying days are limited. However, I do not think hanging up the headset for good will douse the passion. Flying friends who need ballast, EAA activities, books, aviation films, and always learning will, I think, sustain me. Dear reader, take Budd Davisson’s advice: “Aviation is best lived if started young, but it’s never too late to start.” If you have the passion, feed it! Sadly, my son is not in a position to get involved, living abroad in an enormous, aviation-hostile city. But there are two grandsons who think Grandpa’s airplane is pretty cool…

How I came to be an ag pilot
Scroll to top