Blog - Latest News
You are here: Home1 / Article Archive2 / I was there3 / It was a dark and stormy night when I took my old Aeronca Chief to West... 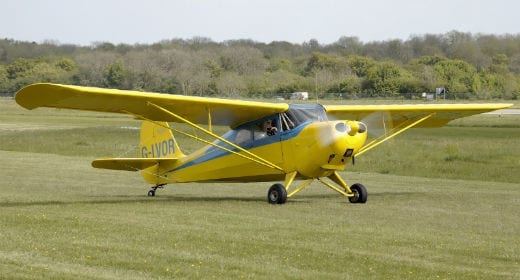 The relationship with my 1946 Aeronca Chief often segues into a world of strangeness. Owning and maintaining and flying an old fabric-covered taildragger is analogous to using a 1951 MG-TD as your personal car. Frustration is often the dominant emotion, and if it rains, you’re gonna get wet. But one learns to take things as they come, and most of all, to keep a sense of humor.

This story grew out of my wife’s terror of my hand-propping the Continental A-65 that originally powered the Chief. When I was having the overhauled engine torn down for a vibration, she decreed, “Put a starter on it!” Well, I said, can’t do that with an A-65. Well, she said, then get an engine that you can. So I did. Don Swords in Griffin, Georgia, built a beautiful Continental C-85 for me, with a starter, and I was off to the races until learning the STC I bought for the installation was invalid for an 11-AC Chief. Oops.

Owning a Chief: “frustration is often the dominant emotion.”

This engine installation would require a field approval by the FAA, but no one I consulted believed the Indy FSDO would approve it: “No field approvals.” After much searching, good luck found me in the form of Bill Pancake, the Intergalactic Guru of Aeroncas, based at Keyser, West Virginia. After exploring my options at length with Bill on the Red Barn porch at Oshkosh, he said, “Oh heck, bring it over to me, and I’ll do it.” Uh-oh. The engine was hung, but there was no battery box, no weight-and-balance, the wrong prop, and no ferry permit (refused). There was only one way to get the plane from Indy to West Virginia: truck it. I was petrified, concerned that if I ever got the plane torn down for transit, it would never fly again— all of you know about disassembled airplanes tucked into dusty hangars for 20 years, right? But fellow EAA chapter members assured me it was a piece of cake.

Indeed, it almost was. I rented a 32-foot box truck and bought piles of packing material. A gang of EAAers and my regular A&P/IA had the airplane in pieces in less than two hours, wings laid out on the hangar floor. The next day, another EAA gang helped load the pieces and secure them in the truck. Then I set out on a rainy morning, jerking and bucking as I adjusted to a big diesel truck with air brakes and an unknown stopping distance, while worrying that the Chief would come untied and be totaled.

By the time I made the Ohio border, I was getting cocky: I had this big truck licked. At the rest stops, I parked with the big boys, and was treated like one of them. I made it through Columbus, Ohio,rush-hour traffic, feelin’ good. But in late afternoon, about 20 miles east of Columbus, the truck started to shake like God’s own mighty dog. I slowed to 65, and the shaking stopped… briefly. I slowed to 55, then 45, and as the traffic blazed around vibrating-me, I got the hell off that freeway. There I was, at the Flying J Truck Stop, with my disassembled airplane in a disabled truck.

Sigh. I called the rental agency’s help line. A service truck was on its way, they said. In less than 20 minutes, a huge truck pulled up, with what looked like an entire mechanic’s shop on the back. From the truck emerged a short, wide guy with the dirtiest t-shirt, pants, and hands I had ever seen, and a fierce expression. “What’s yer problem?” he barked. After I explained, he checked the wheels, then fell to the wet ground and crawled under the truck. Barehanded, he grabbed the driveshaft and shook it. Now even I could see the problem: shot U-joints, fore and aft. (Now I also understood why he looked as he did.) Mr. Fierce got up and growled, “Good thing the front one didn’t let loose on ya. It woulda pole-vaulted you right off the road.”

So we called the agency again, and he explained the problem. Well, they said, we’ll send out another truck and you can transfer the load. Um, I replied, the load is a disassembled antique airplane that took a crew of five to load and secure. Can you handle that? Oh. We’ll get back to you. By this time, I had gone into good-ole-boy mode with the roving mechanic, and we were having a great time, sharing family stories about who was a drunk and who was in the Army and so on. I had to open up the truck so he could take pictures to show his buddies an airplane in a truck. The agency called back— no parts until tomorrow, sorry. Unacceptable, I said, I have a date in Keyser, West Virginia. More phone calls and unworkable suggestions followed, but my now-friend mechanic said, “I know what they’re gonna do— they’ll tow you to West Virginia.”

And by golly, they did. Two hundred-fifty miles. The agency said it might take a couple of hours to get a tow rig out, so I went to the truck stop cafe for a sandwich, and called home. By the time I got back to my machine, a massive tow truck had pulled up beside it. The sign below the cab read “GVW 96,000 lb.” This was a serious truck. The rangy and friendly driver got the facts, disconnected the driveshaft, and pulled my truck onto the ramp of his. He said, “You ridin’ with me?” Well, sure. This was a tall semi tractor, regal in its height; as I climbed into the cab, it occurred to me that if I fell to the ground from my seat, I would die.

Off we went into the rain and dark, the tow truck, my truck, and my airplane. The driver settled in at 75 mph, and started talking. And eating supper. And drinking coffee. And smoking. And talking on the phone to one of his drivers, who was lost. And delivering a fascinating monologue on the lives and times of Big Rig Tow Drivers. All of this at the same time. Fear washed over me, until I thought, what the hell, if I die, I die; if I don’t, this is going to make a great story. Somewhere in West Virginia or Pennsylvania, I fell asleep in the middle of some tow-man’s tale of trucker folly.

I awoke at 1 a.m. to see that we were barreling down a mountain, in rain, at 75 or 80 mph. It was time to call Bill Pancake again and let him know where we were. He said to call as we turned off the Interstate, and he would get dressed and meet us at the Keyser, West Viriginia, Walmart parking lot. Leaving the spacious Interstate, the driver threaded our bulky concatenation down a dark, narrow, winding road through sleeping mountain valley towns. Our mirrors must have rustled bedroom curtains in streetside homes, because my driver had evidently not learned the words “slow down.” It was a carnival ride at 55 or 65 in a 25. Against all odds, about 2:30 a.m. we reached the Walmart lot, and there was Bill. After introductions, my driver said, “Let’s head for the airport.”

Bill frowned and told the driver that the airport was a grass strip carved out of a mountainside, with a dirt access road and a narrow bridge that would surely give way under the load. After much head-scratching, we decided to reattach the driveshaft, so I could drive the rental truck up to the airfield. My tow driver did the work, then headed for home. I crept up to the airfield, barely able to make the turn into the woods and up to a tight parking place. Truck secured, Bill took me to his house so we could crash for a few hours.

Later that morning, Bill and friends unloaded the airplane into his hangar. I took the truck back to the Walmart parking lot, and called the rental agency. Look, I told them, the truck is back at the parking lot. Now what? Well, thanks, they said, we’ll have someone pick it up later. But, I said, what about me? I rented the truck round-trip; it’s my ride back to Indianapolis. Oh. A series of unrealistic suggestions followed—no, I can’t drive it to Pittsburgh to their shop. Or walk there to get another truck. Can you guess? The final solution: “We’re going to tow you again!” Yet another nice talkative fellow in an enormous rig showed up the next morning, and towed my crippled truck and me to Morgantown, West Virginia, where the agency gave me a small panel truck, which I drove home.

No, that’s not the end of the strangeness. When Bill completed what turned out to be a splendid major overhaul of the airplane and correction of its many failures of documentation, I was unavailable to fly it home. Bill generously volunteered to fly it over to Indy, if I would rent a car for him to drive back. He did fly it over, in winds stronger than I would have dared, and landed it maybe three times before wrestling it to the ground at Indy Regional. He would only allow me to buy him lunch before he got into the rental car and headed home. To cap off this comedy, somewhere in the mountains, he was forced into a guard rail by a truck dodging a deer, and wrecked the rental car. I was very happy I had bought the extra rental insurance, because he was driving a car rented in my name!

To avoid accusations of commercialism, I won’t name the truck rental agency, but I will say they did everything they could to get my load and me where we needed to be. And they never billed me for the truck. I would rent from them again without hesitation. If you know anything about auto racing, you know which company it was.

The happiest I have ever been in the Chief was the first day I yelled out the window, “Clear prop!” and turned the starter key. You old-timers know what I mean.

This is why you became a pilot