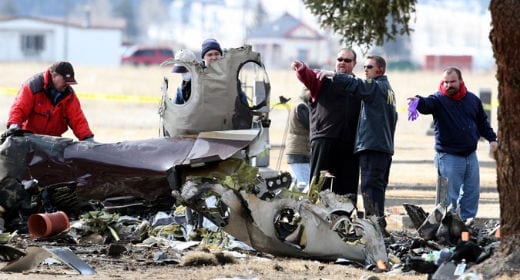 According to Hemingway, a man goes bankrupt gradually, then suddenly. The same could be said of the way pilots crash airplanes: a series of small mistakes slowly build up until a final mistake suddenly ends the flight. A 2009 Pilatus PC-12 accident in Montana is tragic example, where a series of minor mistakes combined to create a fatal outcome for 14 people. There is a lesson here for all of us.

The flight began in Vacaville, CA (VCB), with the pilot and nine passengers on board. After a short hop to Oroville, CA (OVE) to pick up more passengers, the plane departed for Bozeman, MT (BZN) just after 11am PDT. Media accounts would later make a big deal out of the passenger load–six adults and seven children in an airplane with only 9 passenger seats–but this ended up having no significant impact on the flight.

The Pilatus crashed into a graveyard just west of the airport in Butte.

That’s not to say that this decision was meaningless. Taking off 600 lbs. over maximum gross weight and with 4 passengers too many does suggest a casual disregard for the airplane’s limitations. While the Pilatus will haul a lot of weight, 600 lbs. is hardly a rounding error. This attitude may have come into play in a much more serious way, as we’ll see.

The flight progressed normally until about 22 minutes into the flight, when a fuel imbalance developed between the left and right tanks.  The Pilatus has a refreshingly simple fuel system, with two main tanks and one basic control–it’s either on or off. If a fuel imbalance occurs, the boost pump on the fuller tank automatically starts, forcing more fuel from that tank to the engine and solving the imbalance within a matter of minutes. There’s nothing for the pilot to do.

In this case, the system appears to have worked: the Central Advisory and Warning System (CAWS – a centralized annunciator panel in the Pilatus) recorded the right boost pump firing when a 70 lb. difference existed between the left and right tanks. The pump remained on for approximately four minutes, then went off. The fuel imbalance was solved, just the way the engineers drew it up.

About 1:18 into the flight, the opposite situation occurred, with the left wing holding more fuel than the right. This time, though, the imbalance was not fixed: the left boost pump fired and remained on. In fact, a few minutes after the left pump started, the right pump also came on, suggesting the left pump was not delivering enough fuel to the engine. Something was restricting the flow of fuel from the tanks to the engine.

The NTSB pinned the blame on ice in the fuel. The airplane was flying at 25,000 ft., where the outside air temperature was well below zero. As the fuel got colder, it turned to slush and prevented the left boost pump from working properly. The pilot’s first–but critical–mistake was not adding Prist (a Fuel System Icing Inhibitor) when he fueled the airplane. Prist lowers the freezing temperature of Jet A and is designed to solve this exact problem.

In fact, it seems the pilot never used Prist, at least as far as the NTSB could tell. Fueling records from FBOs showed no evidence of it being added on recent flights, and data recovered from the CAWS showed that the boost pumps had been operating multiple times over the previous few flights. On one 2007 trip, the boost pumps operated 260 times–a highly unusual situation. The likely reason for this would be ice in the fuel system, requiring the boost pumps to raise fuel pressure back to normal levels. This flight was a warning, one that was missed.

In cruise flight at 25,000 ft., the activation of a boost pump would be annunciated on the CAWS panel with a green light. This was not an emergency situation, but it was abnormal (especially both pumps at the same time), and it should have held the pilot’s attention. The Pilatus POH notes that if the fuel difference cannot be balanced, the pilot should “land as soon as possible.”

But the pilot flew on for almost 30 minutes before finally admitting there was a serious problem and diverting. While an imbalance of more than three bars on the fuel gauge is abnormal, the accident airplane showed a 15 bar differential between left and right when the turn toward Butte, MT (BTM) was made. It’s likely that the pilot, a professional hired by the airplane’s owner to fly his family, was focused on completing the trip with a minimum of hassle. Diverting, especially when fairly close to the destination, must have felt like defeat.

The pilot waited to divert until the fuel imbalance was a major problem.

The pilot had little choice, though. He was in trouble, and he seemingly knew it–busting two altitude assignments and turning for BTM before asking Air Traffic Control to change his flight plan. He was rattled.

As he flew on, the imbalance only got worse. Like most turbine airplanes, the pumps in the Pilatus deliver far more fuel to the engine than required for normal operation, and the excess fuel is returned to the tanks. But with the left tank basically iced up, the result was that the right boost pump was the only one working. In a circuitous way, it was essentially moving fuel from the right wing into the left wing.

By the time the airplane was close to Butte, the left wing held 1,368 lbs. of fuel (full) and the right tank held 66 lbs. (basically empty). That massive imbalance–26 bars on the fuel gauge–surely made the airplane difficult to control, especially considering the PC-12’s long wingspan. But while an NTSB analysis determined the Pilatus was flyable, the pilot came in fast and high: just 1.8 miles from the airport he still needed to lose over 3,500 ft. of altitude.

Knowing he would not make the runway straight-in, the pilot did a smart thing and turned to enter the left downwind for runway 33. As the airplane slowed, it would have taken more and more aileron to counteract the left wing down forces. During the turn, the pilot lost control of the airplane and crashed into a cemetery just west of the runway. All 14 on board were killed.

The final NTSB report gets complicated, but comes up with a familiar refrain: pilot error. Specifically, they list three main causes: the pilot’s failure to use Prist, his failure to take remedial actions in a timely manner, and his loss of control while maneuvering. The second one may be the most important. Pilots are loath to divert or land short, feeling like they failed at their “mission.” In this case, every minute of delay lowered the odds of a successful outcome, as the imbalance grew more severe. Even descending to warmer air may have helped the problem.

Some of the specifics of this accident, like Prist and turbine fuel systems, don’t apply to all (or even most) pilots. But there are a couple of universal lessons here that are a good reminder. If a highly experienced pilot can crash a well-maintained, high performance airplane in good weather, it should make us think.

First, and most obviously, it’s a good idea to follow the manual. It may seem overly parental at times (or written by the Legal Department), but most things are in there for a reason. In this case, adding Prist may have seemed like a minor detail, but Pilatus had very good reasons for requiring pilots to use it anytime the airplane was operated in temperatures below zero. They had done extensive testing with the fuel pumps knew that ice in the fuel system was bad news, especially in a single engine airplane.

Beyond just memorizing the POH, it’s worthwhile to understand the story behind the checklists. Why did they require Prist? Knowing the system in detail might have clued the pilot into the serious nature of the limitation.

Secondly, don’t let one mistake compound another. Most pilots are familiar with the concept of an error chain, or the “Swiss cheese model” of accidents, where a number of errors are missed by pilots and, when added together, create an unsafe situation. We learn about this in primary flight training, but our eyes may glaze over when the instructor drones on about some esoteric accident theory. Does this stuff have any use in real life?

This accident proves that it does. In this case, the pilot made a number of mistakes that were not fatal on their own. He didn’t put Prist in, but that didn’t kill him right away. He didn’t divert or descend when the fuel problem first became apparent, but that didn’t kill him. He was too high and too fast when he reached his alternate airport, which usually is not fatal in an airplane. But all of those things put together created a scenario with almost no margin for error.

Put simply, we need to admit it if we’ve screwed up. If we admit it in time, we can break the error chain, get on the ground and prevent an accident.

This article is based solely on the NTSB report covering this event.

We did something to the altitude
Scroll to top