Blog - Latest News
You are here: Home1 / Article Archive2 / I was there3 / Recollections of EAA Founder Paul Poberezny 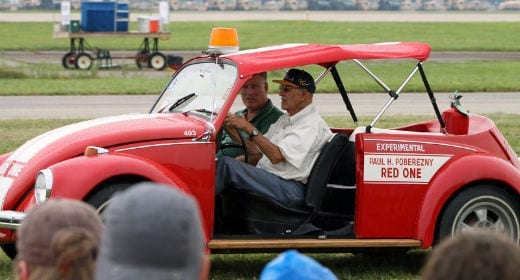 I knew Paul Poberezny well from the early 1980s, having been introduced to him by a non-pilot colleague at Mayo Clinic, where I was on the medical staff. I went on to be Paul’s primary doctor at Mayo until I moved to Utah. Paul charmed me into joining EAA (he always carried several copies of the organization’s flagship magazine, Sport Aviation, to hand out), and at my request granted me my father’s EAA number, 37,802.

Later, I worked closely with him as EAA’s medical representative to an ad hoc FAA committee reviewing the performance of then-Federal Air Surgeon Dr. Frank Austin. That led to Paul’s asking me to form the EAA Aeromedical Advisory Council, which I chaired for several years. Among the side benefits of this work for the association, I got to spend time with Paul during the EAA’s annual convention, now called “AirVenture,” and in between, over many years.

Paul Poberezny was not a perfect human being, but he was generous and down-to-earth.

Paul became a friend whom I could call at any time, including nights and weekends, and expect a warm response. I think he had similar relationships with countless others. He was not a perfect human being, and those who knew him in the earlier days of EAA might have some grumpy stories about “Pope Paul.” Perhaps no one who accomplishes as much as Paul did could escape having an ego flair now and then, and making critics if not enemies.

However, my experience with Paul was highly rewarding, and I found him a generous, down-to-earth, kindly, inspirational, and thoughtful man. In my experience, Paul Poberezny was Paul Poberezny, no matter when, where, or with whom. Here is an anecdote that tells a good deal about his character.

One day at Oshkosh during the convention, I was riding somewhere with Paul in his cut-off VW, Red One. It was always hard to go anywhere on the field with him, because he was constantly being hailed by someone wanting to shake his hand, take a picture, or just chat. On this occasion, a tall, thin young working man–maybe a lawn service guy or auto shop mechanic’s assistant, accompanied by two boys 6 or 8 years old–flagged us down. I don’t think he knew who Paul was, only that he was some kind of EAA muck-a-muck because of the official car.

The fellow said that he’d brought his two boys because they were both passionate about airplanes, but that the gate passes and travel costs had cleaned out their funds. He was disappointed to learn that an additional fee was needed to get the boys past the “brown arch” and onto the flightline. He asked if there were an office where he might try to negotiate a way to get the boys in.

Paul listened quietly, then started describing the fees and rules, but stopped before he finished. Paul looked at the young, somewhat ragged dad, then the boys, back to the dad, and back to the boys and their pleading faces. After a pause, he turned to me with a hoarse voice and moist eyes, and said, “Stay here with them; I’ll be right back.” He walked to the headquarters building and soon returned with three flightline day passes. He gave one each to the boys and the dad, saying, “You have fun, and make sure these boys see everything they want. And bring ‘em back again.” The dad and boys were ecstatic and profusely thankful. Paul gave them two thumbs up, and drove away. After a moment, he cleared his throat and said to me, “Just planting seeds.”

Red One, perhaps the most famous experimental vehicle at Oshkosh.

As I understand it, Paul had been raised poor. His life was changed by a high school teacher who funded the reconstruction of a wrecked primary glider, in which Paul learned to fly. He didn’t speak much about such matters, but I gathered that there had been many other people who supported and encouraged him as his aviation career developed.

After the incident with the man and two boys, I wondered if a recollection of his youthful passions, the chronic shortage of money, and help others gave him came to his mind when he looked at the boys. Paul said many times, in many places, that he came to aviation because of the machines, but stayed in it for the people. He also said wryly that along the way, he’d learned a lot more about human nature than he expected.

The story above is just one from the many recollections I have of this passionate, astonishingly influential, and yet down-home man. I am very pleased to have known and worked with him and his important wife, Audrey. His life was well and truly lived for the benefit of others and for general aviation—but especially sport aviation. His vision of flying was inclusive: he wanted all people to have a chance at the experience of airplanes and flying “in the great ocean of air above us.”

All subsequent leaders of EAA have stood on the shoulders of a quiet giant. Let us hope that other men and women of strong character will emerge to head the key aviation groups with his passion for everything-aviation, and his ability to lead and inspire people. Godspeed, old friend, and thank you for everything.

The error chain in action: Pilatus crash at Butte
Scroll to top