Blog - Latest News
You are here: Home1 / Article Archive2 / I Can't Believe I Did That3 / We did something to the altitude 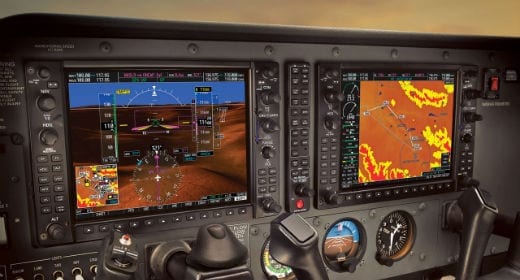 I had received my pilot’s certificate back in the late ‘80s and of late had not been able to fly to keep myself current. Being a husband and father of two, the days of flying anything that had wings and an engine had passed, and I found myself looking to fly aircraft that were newer and better equipped, to satisfy my safety concerns and try to stack the deck in my favor as much as possible.

When my friend Paul had mentioned a club at Republic Airport where I fly that was renting 2007 C172s with the G1000 panel, I jumped at the idea. I was previously flying a 2003 Piper Archer with 2 Garmin 430s and while I love the Archer, the club where I rented was very expensive, and I was excited to “step up” to the newer system and all the bells and whistles it offered, and do so at a lower cost.

It’s an amazing system, but it’s not the PIC.

The first one or two flights were spent acclimating myself back into a 172. It had been awhile since I had flown one, and I was a little rusty with its handling (I find the Archer “crisper” and more responsive, but that is strictly my opinion, and both are excellent aircraft). Other than changing frequencies and doing basic “Direct To” navigation, we didn’t do too much experimenting with the G1000 system.

At the end of the lesson, I suggested to Paul we schedule some time in the Redbird TD2 the club offered, to do some G1000 training before we came back to the plane. I also purchased a G1000 course from Sporty’s as well as some manuals from Pilot Workshops to help me along. As much as I studied, and as hard as I tried to take in the information in the simulator, something just wasn’t clicking. I am my own worst critic, and unless I feel comfortable, I am not ready to fly solo. Paul agreed, but felt I was much farther along, and he suggested we fly once again. I agreed.

We scheduled the plane one fall afternoon around 4 pm. I was running late from work, so by the time I got to the plane, I was a little tense and hungry, since I hadn’t eaten lunch. To top it off, I didn’t even bring a bottle of water, which I normally do for every flight. I settled down, did the preflight, and was ready to taxi as the last bit of sunlight disappeared into the dark. I was hoping for a little period of daylight so I could see everything clearly before we went dark, but that was not to be. We stayed on plan, and departed to the practice area.

We asked for traffic advisories while in the practice area, which NY Tracon provided. I find NY Tracon especially accommodating, as long as you sound and act like you know what’s going on, and tonight was no exception. Frequently, they called out traffic, which we were able to see on the G1000 as well as visually. As the flight continued, we entered some “Direct To” airports, waypoints, and VOR’s to practice navigating, and spent some time studying the display and what it was showing.

Paul still had me hand flying as he wanted to be sure I could multi task while programming. While he did not discourage autopilot use, he wanted me to hand fly while we were together. I was fine with that, but it did take some concentration, and I felt like a lot of the explanations and displays were not sinking in because I was focusing on flying. The other idea that popped into my mind for a minute was that I was spending a lot of time “heads down” between checking my altitude and heading as well as looking at the map displays and trying to take in what Paul was showing me.

After about an hour, we decided to head back to Republic Airport and do some touch and goes. We cancelled Flight Following, picked up the ATIS, and headed towards the Northport Stacks, which is the reporting point on the north shore of Long Island when you’re inbound to Republic. We called the tower, reported at the stacks, and they cleared us for a straight in to runway 19, and asked us to report the mall (a big shopping center that is about a five mile final to runway 19).

I didn’t have visual on the airport, and couldn’t make out the mall with all the lights ahead, so I asked Paul if he could “extend the centerline” as we would do on the Garmin 430’s, programming a specific heading to fly to the airport, in this case 190 degrees, which would more or less align us with the runway. Neither of us had done it on the G1000 yet, so Paul started selecting different screens and I continued flying inbound, glancing down at what Paul was doing as the screen changed and caught my peripheral vision. As we continued in, we finally got the magenta line, but it wasn’t aligned with the runway.

I still didn’t have a visual on the runway, but did see the mall, so I adjusted my heading, and feeling better oriented with where we were, spent more time “glancing” down at what Paul was doing. Paul was adjusting the display and getting the line to come around, and I was watching what he was doing so I could do it myself next time. After what only seemed like a second or so, I looked back outside and got a very different picture than what I was expecting. There seemed to be a lot of lights in the windscreen. Something wasn’t right with what I was seeing; I just couldn’t put my finger on it. Where was the mall?

I looked out to where I thought it should be and all of a sudden, the picture became clear. I could see the faint lights of the runway about 3/4 of the way up the windscreen, and four very red PAPI lights to the left of the runway. I looked down at the PFD. Attitude was ok, speed was ok, altitude was……700 FEET!!! We were still 5 miles out.

I applied full power, held the nose at a constant pitch so I didn’t wind up nose high, confirmed positive rate, stable airspeed well above stall, and started climbing. As I applied full power, Paul looked up and very calmly, with no misunderstanding of what needed to be done, stated “get us back up, there are towers out here”. I continued the climb until the PAPI’s indicated a normal glidepath, and then adjusted accordingly (maybe just a little higher after that). We were just over the mall, so I called the tower and reported over the mall, and they cleared us for touch and goes as if nothing had happened. The rest of the approach was normal, maybe some light chop from my hand shaking, the touch and goes were “distracted” at best, and the landing–well let’s say, it was more of an arrival…or two.

Going home that night I was discouraged and disappointed in myself. I thought back to the Eastern 401 crash where the entire cockpit crew worked on a faulty landing gear bulb while the L1011 descended into the Everglades at night. The last words were that of the co-pilot saying “We did something to the altitude” right before they hit. Those words echoed in my mind.

The next day, while feeling rested, I still had that disappointed feeling. I loved flying, it was always my dream, and could never picture doing anything else, yet there was last night. I started thinking that perhaps the G1000 is just too much. I felt overwhelmed by the system, and didn’t feel I was making progress developing a comfort level with it. While that may seem an extreme thought, it was the first rational thought I had since transitioning to the 172.

I went to the internet, and did a search of the other flight schools at Republic and found another Piper Archer with Garmin 430’s, and at a really reasonable rate. I had let  myself get caught up in the technology and wanting to fly with my friend rather than thinking of a way to work up to the G1000 without taking such a big leap.

So, what did I learn?

Jim Goldfuss
Jim Goldfuss has been flying since 1989 and holds a Private license with Multi Engine endorsement as well as an Advanced Ground Instructor rating. Jim lives on Long Island and flies out of Republic Airport in Farmingdale (KFRG). When he can, he is flying a C172SP (G1000) or a PA28-181 Archer (Garmin 430’s) and in the future wants to work up to the Cirrus SR20/22. He has been around airplanes all his life, his dad working for United Airlines, and him with TWA and United. “I always aspired to be an airline pilot, but in the end, things just didn’t work out”. To stay involved, Jim is an AOPA member, belongs to Downwind Pilots Association as well as IMC Club, and if he’s not in the air, he’s in the sim practicing. He currently writes a blog about flying in general and his experiences maintaining currency.

The error chain in action: Pilatus crash at Butte