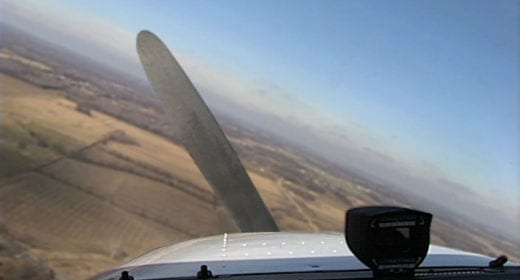 Sometimes it’s scary when you look back at the things you did when you were younger, less experienced, and didn’t know better. Most of the time things turned out OK, but geez was some of that stuff just crazy. What was I thinking? Ahhhh, the blind invincibility of youth.

I remember a flight, well, actually I remember many, but this one ranks up there, where if anything came up short, I probably wouldn’t be alive, let alone a pilot writing about this. Let me just put this out there now: I was young, stupid, and believed in the invincibility of me and my flight instructor, so let’s not go bashing the messenger here.

Do you have too much faith in your flight instructor?

I had been through a few flight instructors as I progressed through my Private Pilot training. Meg, my first instructor, was the goddess of the skies in my mind. Perhaps it was because she was my first…I mean the first one who took me flying, but I had such a crush on her. When she transferred to a school farther away from my home base, I followed her like a new puppy follows their owner, wagging tail and all. I was crushed when she moved to Connecticut and I couldn’t go. She set me up with another instructor there, Dominick, saying he was excellent and was up to speed on my progress. So, after a week of lamenting at home, sending flowers to say goodbye, and all the other indecencies of a heartbroken pilot, I took my first flight with “Dom.”

Dominick and I hit it off right away. He was confident, but not overly so, had a great way of demonstrating maneuvers, and an equally great way of explaining concepts. I had always been a “timid” pilot, and Dom was bringing out my confidence and belief in myself. I had already soloed, and Dom was working on getting me up to speed to do my cross country flights. During this time, I came across the concept of service ceilings and absolute altitudes. For some reason, at that time, I couldn’t grasp why a plane would just not climb higher than a certain altitude without stalling. Dom and I discussed it at length one day, and while the concept was a little clearer, I don’t think Dom was satisfied with my grasp of it.

The next flight was on a cold winter day. We took off and flew to the south shoreline of Long Island, and then headed east towards Brookhaven Airport. After we passed Islip MacArthur Airport we started talking about the absolute altitude concept again. A few minutes later, Dom told me to start a climb at 90 knots. We were in a Piper Warrior II, so I applied full power, nose was raised, and up we went. We started at 2000 feet, and the climb rate on this cold day was pretty good at about 1400 feet per minute (if I remember correctly).

Climb we did, making ovals in the sky as we passed 3000, 4000, 6000 feet. As we continued up, I noticed the rate of climb decreasing. Going through 8000 feet we were barely making 400 feet per minute. Long story short, we got to about 11,000 feet, 0 feet per minute rate of climb, 50 knots with full flaps, and any pull up on the control column caused a stall, and any decrease in back pressure caused a descent. NOW I understood the concept, and it was pretty cool to see it in practice rather than just an explanation in a book.

We were planning to do touch and go’s at Brookhaven, so we turned back eastbound and started our descent. We were just off the coast, south of Brookhaven, descending through 10,000 feet, and admiring the vista from this altitude. Other than in an airliner, I had never been so high, and Dom seemed to be enjoying it as well. While up here, we discussed emergency procedures if we lost an engine.

Dom pointed out that sometimes being so high can leave you too many options, causing indecision and second guessing, and at the end of the day, you wind up with no options. We discussed an engine failure and the procedure we would use. We then started discussing a scenario where you had an airport made, but needed more time to troubleshoot (say a gear problem), and needed to extend the “air time” rather than the glide distance. This is where the Minimum Sink Speed conversation started, and our slide down the slippery slope began. We set up a speed between best glide (77 knots) and clean stall speed (56 knots) and noted that while we would not travel as far, we were descending at about 300 feet per minute, a very slow rate.

Is this really a good idea?

Dom also pointed out that if you needed more distance (over sparse and inhospitable terrain) you could “stop the prop.” We were just descending through 9000 feet, so Dom walked me through the process, explaining that you would never do this at a low altitude, due to the fact that you had to stall the plane and the risk of a loss of control and altitude outweighed the benefits. We gave the throttle a good push to clear the engine (as we had been doing every 1000 feet on the way down), and then we started slowing. We shut down the engine and flew on for a little bit. The prop just windmilled and Dom explained the residual drag that the spinning prop causes. Then we slowed further to just above stall speed. We never stalled, but the slow speed and high angle of attack was enough to stop the prop. Once stopped, we lowered the nose and regained our normal best glide speed. We used the ignition to get the prop into the horizontal position, and then flew on.

The silence was cool. I had flown in gliders, but being in the silent cockpit of the Warrior was surreal to me. Dom showed me that we still had full control, and that planning was now key to make our arrival at Brookhaven. We continued circling over the water, and coming through 4000 feet we headed in for the 45 degree entry for runway 24. Altitude was still good as we came inbound, winds were light too, which helped. We entered the downwind at midfield and were at 1500 feet, a little high, but acceptable. I continued downwind, watching the runway, planning to fly a normal pattern. Dom was monitoring everything like a hawk as well. His head never stopped moving between the panel and the runway. We were making all our radio calls, but there was no one in the pattern, so we had the airport to ourselves.

We turned base and shortly thereafter turned final. Now, this is probably a good time to fill you in on a pertinent piece of information. Lately, during landings, I was in the habit of coming in low, requiring power to level off and hold altitude until I was back on the glide path. Well, today was no exception. I turned final about 1/2 mile out, and was greeted with the red over red display of lights from a VASI saying, “you did it again, big guy.” The display was not lost on Dom, but in his usual calm and collected tone he called out, “Don’t try to stretch the glide yet; hold what you have on the speed.” He said this a few times as we approached the runway, although the grass and fence were approaching as well, and just a little bit quicker.

I should probably mention too, that as well as being low on my approaches, I also tended to come in a little fast, only 5 knots or so, and today was no exception. At about 100 feet, Dom said “You have it, let me just give you a little assist” and pulled back on the wheel a little. The result was a balloon up about 100 feet, putting us right where we needed to be, floating right over the fence, and touching down just past the numbers. Dom, once again, was the man!

As we rolled down the runway, Dom told me to track straight and he would get the engine restarted and we would do some touch and go’s. We still had plenty of runway remaining, so I did not feel this would be an issue. Did I tell you earlier that it was a cold winter day? Dom put the mixture full rich, throttle open ¼ inch, fuel pump on, etc… ignition on, and… nothing. Once more… nothing, just the empty cranking of an engine that was clearly not going to start. We were still travelling at about 30 knots, so Dom told me to pull off. I made the first left onto the taxiway and stopped. There was complete silence in the plane. The gyros had spun down 20 minutes ago when we shut everything down. Dom looked at me and said, “We cold soaked the engine; we might be here a while.”

A while turned out to be only about 30 minutes before we got her restarted, and after warming up again (it did get quite cold in the plane while it was shut down) we took off and did some touch and go’s. The rest of the flight was routine. Dom and I laughed at what had happened, reflected on what we should have – and should not have – done, but we moved on. My trust in Dom was still unshaken, and while many out there will say how reckless it was, and while I may not put up much of an argument, the learning experiences I walked away with, however lucky I was (and I know I was lucky), served me well. Dom also had me do spins – NO not in a Warrior, we rented the club 150 and did spins. Required for the exam? No. Something I will remember and appreciate? Absolutely.

So, what did we, I mean I, learn here? There were a lot of takeaways:

Jim Goldfuss
Jim Goldfuss has been flying since 1989 and holds a Private license with Multi Engine endorsement as well as an Advanced Ground Instructor rating. Jim lives on Long Island and flies out of Republic Airport in Farmingdale (KFRG). When he can, he is flying a C172SP (G1000) or a PA28-181 Archer (Garmin 430’s) and in the future wants to work up to the Cirrus SR20/22. He has been around airplanes all his life, his dad working for United Airlines, and him with TWA and United. “I always aspired to be an airline pilot, but in the end, things just didn’t work out”. To stay involved, Jim is an AOPA member, belongs to Downwind Pilots Association as well as IMC Club, and if he’s not in the air, he’s in the sim practicing. He currently writes a blog about flying in general and his experiences maintaining currency.

What it takes to be one sharp pilot, part two: intelligence
Scroll to top