Blog - Latest News
You are here: Home1 / Article Archive2 / I was there3 / The flight of a lifetime 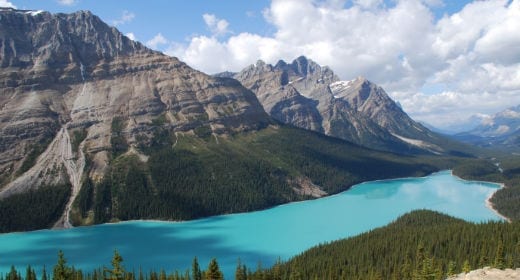 Flying in a light aircraft has its risks and rewards just like any other endeavor. We all know that the risks can be considerable, but what about the rewards? Are they worth the risks?

Peyto Lake taken on the ground (yes it really does look like that).

In September 2012 I took my daughter on a flying trip to Calgary, Alberta. Although the main purpose was to visit Banff National Park on the ground, we managed to get in a sightseeing flight during our stay. That flight turned out to be the highlight of the trip, and the most spectacular of my life.

We departed the Springbank Airport (CYBW) on a calm and sunny day heading west. All flights in Canada must be on a flight plan, and since we were in the Calgary terminal area we were assigned a transponder code. The controller allowed us to keep the code for the return into Springbank even though we were going to be out of radar contact for a couple of hours.

As we entered the mountains at Canmore, I throttled back to a leisurely 110 KIAS to take in the magnificent scenery. The next two hours were spent in rapt attention looking out the windows while we made our way up the Bow River valley and then the Icefields Parkway. Our objective was the Columbia Icefield. This is an immense expanse of snow and ice lying at an average elevation of 3000 meters (9840 feet) above sea level. It covers 325 square kilometers (125 square miles), and is one of only two points in North America from which rivers drain into three oceans: the Arctic, the Atlantic, and the Pacific. The Columbia Icefield is the largest glacial remnant of the last Ice Age in the Rocky Mountains. I wanted to see it up close.

To say the flight up the Bow River valley was spectacular would be an understatement. We cruised by Lake Louise, a world-renown resort and recreation center. Lake Louise is just one of many glacier-fed lakes along the valley, all of which are various bright shades of turquoise.

The Athabasca Glacier with the Columbia Icefield beyond. The little circle in the lower left is where the snow coaches park.

Upon reaching the icefield we left the safety of the highway below and entered at one of the eight major glaciers flowing down from its heights. The most famous of these is the Athabasca. The Athabasca Glacier is a major attraction in the area because specially-built and equipped snow coaches drive well up onto the ice and provide tourists the opportunity to get out and experience the Hoth-like surroundings (for you Star Wars fans) first-hand. That would be the way to go if one was ground-bound, but there is no way to see the actual icefield from that vantage point. The difference was readily apparent from 11,000 feet MSL. We could see the snow coaches on the glacier, but they were mere specks on the surface.

We felt like we were floating over a huge white blanket so large that there was very little sense of motion. As we approached the western edge of the plateau, we noticed a sheer drop like that of the Grand Canyon, about 4000 feet. It took several minutes of trying to take it all in before we could even begin to comprehend what we were seeing. The ride was smooth most of the time, but we did encounter some light chop on the leeward side. This is understandable given the nature of the terrain. Anything more than 15 or 20 knots of wind is probably too much to be flying a small plane there safely.

My flight plan schedule allowed for 30 minutes over the icefield and then it was time to head back. Once we were in the valley we regained the relative safety of having the Icefields Parkway available as an emergency runway. The return trip was just as magnificent as the outbound leg.

Mount Chephren on the way back.

A few small clouds graced some of the nearby peaks, including Mount Chephren (3266 m / 10,716 ft.). We had just been hiking there the day before. I never cease to be amazed at how perceived distance shrinks when one is just a few thousand feet above the ground. Nonetheless, Mount Chephren is a formidable piece of rock even from the air. Upon exiting the mountains we took up right where we left off with Calgary Approach as we were instructed to follow the highway back into Springbank Airport.

Back in my college days I attended a 35mm slide show presented by a geology professor. His slides were from the camping trip he and his daughter had made in his Cessna 182 from the Lower 48 to Alaska and back. The pictures of Mount McKinley (the locals always refer to it as Denali) from the air were simply astounding. I promised myself right then and there I would do something similar one day. A lot has changed since then, not least of which is the price of avgas. I feel fortunate just to have gone half that distance in my own plane. Was it worth it? Absolutely!

Photo and video credits go to my daughter Brittany. She had both her Nikon and her GoPro running the whole time. I talked my son Brian into making a music video from the raw footage. The result of his efforts can be seen in this video.