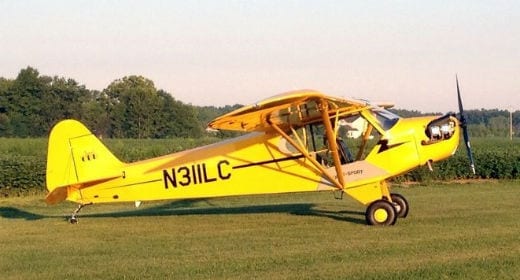 It might not be polite to start with a pet peeve but here goes: “taildragger” is a terrible thing call an airplane. If a person is dragging his tail (ass), that means he is worn out, hardly capable of continuing on. On the other hand, tailwheel airplanes have sparkling and fresh personalities and they stand ready to teach lessons and quickly reward you for good piloting or to stomp on your foot for bad. They are hardly dragging anything except maybe your butt through the weeds if you are a lousy pilot.

As drag pertains to airplanes, the word should be used only in connection with its aerodynamic meaning.

With that out of the way, I want to discuss the general aviation evolution from tailwheels to nosewheels.

The Ercoupe was the first practical light airplane with a nosewheel.

In the 1930s, the government sponsored some design competitions for airplanes that would be simple to fly. Most entrants had tricycle landing gear as it came to be called. They also had the rudder and ailerons linked so they could be flown with a control wheel only. No rudder pedals. The goal was to make them spin-proof and stall resistant.

As has been true of most government sponsored design competitions, nothing came of this. Instead, someone, Fred Weick, came out of it to design the Ercoupe, the first practical light airplane with a nosewheel instead of a tailwheel. It was a two-control airplane (no rudder controls) and was spin-proof and stall resistant. The Ercoupe first flew in 1937 and went into production a couple of years later. Before World War II caused the curtailment of civil aircraft production, 112 Ercoupes had been built. They built a bunch after the war, the CAA had a special private certificate for it with lower requirements, and they tried to sell them at Macy’s.

After the war most of the other airplanes built were based on pre-war designs, leaving the Ercoupe alone with a nosewheel, but not for long. Two new designs, the highly successful Bonanza and the less-successful Navion had tricycle landing gear. Of the thousands of airplanes built for the war, a substantial percentage had tricycle gear and all airliners on the drawing board were tricycles so it was logical that general aviation would follow suit.

At this point, tailwheel airplanes were referred to as having a conventional landing gear as if that were the norm and a tricycle was not. There was no great demand for tricycles from existing pilots but marketing departments thought the configuration would appeal to more new pilots.

Piper was the first to convert a tailwheel to a nosewheel. They had been building Pacers and in 1952 they came out with the Tri-Pacer. The main gear of the Pacer was turned around and a nosewheel added for what was a simple if not ideal solution.

Where the Pacer had been jaunty in appearance, the Tri-Pacer immediately got an uncomplimentary nickname, the “flying milk stool.” That pretty well describes it and it flew like that, too. Today, all these years later, a lot of owners have made Tri-Pacers back into Pacers. Just scrap the nosewheel, turn the main gear back around, and add a tailwheel.

One advantage to the tricycle was supposed to be ground handling in strong surface winds. I used to own a regular Pacer and flew it in plenty of wind but it could be demanding if the gusts were in excess of 25.

In the beginning, the Tri-Pacer had more upsets in wind than the Pacer ever had. The geometry of the gear wasn’t exactly ideal and if, during a turn away from a strong downwind, the brakes were applied with any force, when the wind was 45-degrees off the tail, the airplane would go over on its back. Once the word got out on what not to do, the trouble subsided.

Cessna was not as eager to go tricycle. It built the 195 with a tailwheel to compete with the Bonanza and Navion and stuck with a tailwheel on the 170 in competition with the Tri-Pacer for three years, until the introduction of the 172 in 1955. Where similar airplanes were built with a choice of landing gear configuration, the tricycle quickly outsold the tailwheel and that version was soon out of production.

As the 172 and later the 182 evolved, Cessna did a lot of tinkering with the landing gear. The first version of both airplanes had longer main gear and stood rather tall on the ramp. This was not ideal in strong winds and the gear was soon lowered and widened and these airplanes became nicer to handle in strong winds.

It wasn’t long before tailwheel airplanes became rare except for special uses. The Cessna 180 and 185 lasted for a while and Maules and Decathlon-types still hang in there. Today, Most of the LSA designs are tricycles though the Cub clones are strong sellers.

I was one of many pilots who flew through the transition from tailwheel to nosewheel and at the time most of us saw it as much ado about nothing. We were doing just fine with tailwheels and actually preferred them. I instructed at two places that had Ercoupes and two-seat trainers with conventional gear and, in most places, the Ercoupes didn’t fly until everything else was gone.

I don’t know whether there was a “real men don’t fly Ercoupes” mentality or not. I just didn’t really like instructing in them for several reasons. The lack of rudder control meant there were a lot of things you couldn’t teach. The tricycle meant the students could get away with less precise approaches and sloppy landings. And because the two locations in question were in Arkansas and Alabama, the Ercoupe was bloody hot in the summertime.

My father had given me a couple of lessons in an Ercoupe when I was 13 and the next tricycle I flew after that was a Bonanza, when I was 19. My checkout in the airplane was different.

The FAA (then CAA) was also different at that time. They were actually there to help.

We were all gathered for a pre-air tour celebration for the 1953 Arkansas Air Tour, that would hopscotch around the state for a few days. We would fly during the day and party at night.

The boss inspector from the CAA office in Little Rock took me aside during the party and asked me if I had ever flown a Bonanza. A rather eccentric gentleman with a Bonanza had made quite a scene arriving in Little Rock and when the inspector investigated he found that the pilot had ordained himself. No certificate.

Jack, the inspector, proposed that I fly the man in his Bonanza on the air tour. In return, he would help me on the instructor’s rating (as it was then called) that I was seeking.

Beech quickly adopted the nosewheel for their best-selling Bonanza.

When I reported that I hadn’t flown a Bonanza, he assured me there was nothing to it. Just get it slowed down and at pattern altitude well before entering the pattern and have the approach speed nailed because it would float if too fast and fall if too slow. He added that I shouldn’t reduce prop rpm (with a toggle switch) after takeoff too quickly because sometimes the toggle would stick and run the rpm all the way back. That was not good for the old rate of climb.

It all worked out and by the time we finished I had over six hours of Bonanza time and felt I knew the airplane pretty well.

The instructor’s rating help didn’t work out because Jack died of a heart attack soon after the tour.

All of us eventually made the transition from tailwheels to nosewheels and while a lot of people never wanted to revisit the good old days, I was always up for flying a tailwheel airplane whenever I had the opportunity. The last one I ever flew was a Helio Courier and anybody who has flown one of those beasts will attest to the fact that it will make you work hard enough to sweat, even on a cold day.

One thing about tailwheels that is not true is that you aren’t a “real” pilot until you have mastered a tailwheel. It’s not what you fly but the care and precision with which you fly that makes you a “real” pilot. It can even be done in an Ercoupe or a Tri-Pacer.

Something we will never know is if tailwheels or tricycles are more prone to landing accidents. The groundloop was predominant with tailwheels and sloppy approaches and too-fast landings resulting in busted nosewheels and firewalls cause landing trouble with nosewheels. There are even losses of directional control in tricycles. Many or even most landing events don’t qualify as accidents, though, so they fail to appear in the statistics.

What about you? Would you like to revisit the good old days of tailwheels? Do you think tailwheels are more likely to be involved in landing mishaps?

Why you must fly a taildragger