Blog - Latest News
You are here: Home1 / Article Archive2 / I was there3 / From the ashes: a flight instructor returns to flying

These were the last words shouted by the PIC of a Piper Seneca before it clipped the treetops and became a fireball on the median of the Seminole Woods Parkway in Flagler Country, Florida, on March 16, 2001. Aviation accident stories can often be lumped into two categories: those from which everyone walks away smarter, and those that end in funerals. This story is an exception to that rule.

The author with Matt Cole, now a CFI in Oklahoma.

When I first met Matt Cole in the terminal at Guthrie-Edmond Regional Airport, I knew he had a story. Scars so often serve as a sign of a story worth hearing, and Matt had plenty of them. He had a prosthesis for a right arm, a mangled left hand and his face was covered in the obvious scars from burns.

I’ll admit that I quickly assumed that Matt wasn’t a pilot. Yet nothing could be further from the truth.

When he was my age, Matt Cole had graduated from the FlightSafety Academy and was looking forward to a career as a pilot. To acquire more flight hours, Matt had accepted a position as a flight instructor in Palm Coast, Florida. Judging by his enthusiasm for aviation today, I can only imagine how exciting the year 2001 must have been for Matt.

Sadly, on March 16 that future would grind to a fiery halt under the Florida sun.

When Matt, his check pilot and another company pilot/passenger set out from Daytona Beach International, the agenda for that day was a run-of-the-mill standardization flight to put the new hire through his paces. As Matt set the Seneca up for a long final to Runway 24 at Flagler County Airport, his check pilot opted to force a single-engine landing by cutting off the fuel supply to the right engine. It was a decision that proved disastrous.

Matt didn’t notice the check pilot’s move quickly enough, and powered back both engines to begin his final approach. The Seneca was soon behind the power curve. According to the statement of the rear seat passenger/pilot to the NTSB, he first noticed the stall warning indicator lit and brought it to the check pilot’s attention. The check pilot realized the problem that had developed, but this realization was all too late.

The NTSB report details what happened next:

“A witness, driving westbound on route 100, just east of the accident site, reported seeing the aircraft about 5 feet above the trees and heading south, southwest. According to the witness the airplane struck the trees on the east side of a four-lane road and then the median area between the south and northbound lanes.”

Matt had managed to crawl out the door but his body was engulfed in flames. A driver who had seen the accident ripped off his shirt to put them out. Somehow all of the aircraft’s occupants managed to escape, but not without serious injury.

Matt looked down at his hands. They had been burned so badly that the skin was black like charcoal. He was taken to a burn unit where he begged doctors to put him to sleep. His wish was granted.

When he awoke, Matt remembers feeling as though he had slept for days. In reality it had been much longer. Two months had passed. While he was in a medically-induced coma, doctors performed countless surgeries in an attempt to salvage Matt’s body. All told, Matt had lost his ears, lips and right arm below the elbow. The fire had burned his left hand and arm so badly that the bones in his knuckles had calcified rendering what was left of his fingers useless. He had awoken to a new reality.

Matt moved back to Los Angeles with his parents. Over the next ten years, he would undergo surgery after surgery to repair the injuries that the accident had inflicted.

Over the years, though, Matt began to adjust. He started to re-learn to do the simple things that you and I take for granted. He and his family relocated to Edmond, Oklahoma, to take a break from the hustle and bustle of L.A.

Then, in 2009, Matt started thinking about doing something that nobody thought was even a remote possibility. He missed flying, and wanted to give it another shot. It wasn’t something that his doctors had ever thought possible after the accident, but that only served as motivation.

“At the start, I didn’t know if I was even going to be able to wipe my own rear end again, much less fly. But I missed it,” Matt said.

Later that year one of Matt’s friends offered to take him up. He was afraid of what it might feel like to be flying again, but that fear wasn’t enough to keep Matt from accepting the friend’s offer. Then, eight years after his life had nearly been taken from him by a plane crash, Matt Cole took to the skies in an aircraft that was all too familiar–the Piper Seneca.

Flying once wasn’t enough, though. Matt decided that he needed to make aviation a part of his life again. He began taking lessons at Wiley Post Airport in Oklahoma City.

Over the next two years Matt would work, with the help of the FAA, to get back all of the licenses and ratings that he had held before his accident. While this accomplishment alone would warrant a tribute to Matt’s endurance, he wasn’t done. There was still one thing that Matt had to do–teach.

In July of 2012, after years of pain, frustration and healing, Matt was hired as a flight instructor at Crabtree Aircraft Company in Guthrie, Oklahoma. One of his first students was a man who had supported Matt more than any other–his dad.

You can still find Matt any morning in the terminal at Guthrie-Edmond Regional Airport. He’ll be spending the day introducing people to the fascinating world of aviation, or swapping stories with local pilots.

When I first met Matt Cole I thought that he wasn’t a pilot, and there is some truth in that. He isn’t just a pilot. Matt is the epitome of the spirit that has kept man flying, the love of being aloft so strong that not even a close encounter with death can keep one away from it. 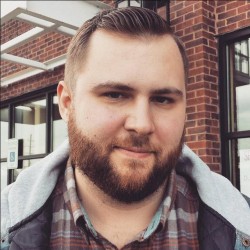 Will Eifert
Will Eifert is a digital marketing professional in Oklahoma City. He is only some night and instrument training away from being ready for his Private Pilot check ride. After falling in love with aviation as a child watching takeoffs and landings at Lunken Airport in Cincinnati, Will is finally becoming active in the aviation community. Recently he helped found the Guthrie-Edmond Aviation Association in Guthrie, OK. Will studied Creative Writing for his BA at Thomas More College. He hopes to start an airline…someday.

Drones: the good, the bad and the ugly
Scroll to top