Blog - Latest News
You are here: Home1 / Article Archive2 / I was there3 / Not so bienvenido 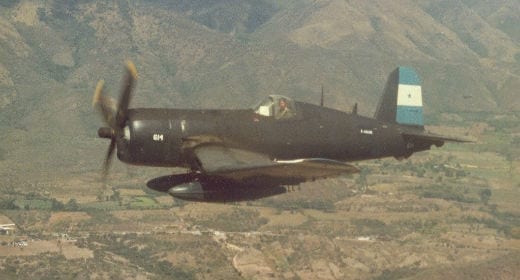 Recently, on a quiet night while cruising at FL390 up the East Coast from Florida to the Northeast, with the coast being lit by the full moon, I was looking at the computer- generated flight plan and the estimates for our arrival and fuel burn, and was struck by how precise our flight planning has become, along with the accuracy of our position reporting. I expect the arrival to be within a minute or two of the flight plan and the fuel burn to be almost exact. It seems the computers have figured it all out for us these days, and what a wonderful thing that is.

Just another ferry flight for a crop duster–Florida to El Salvador.

But it wasn’t always that way. Earlier in my career, when building flight time was important, planning and navigation were more involved and imprecise when done by hand with what information was available at the time.

In the 1960s, while in college, I had the opportunity to occasionally ferry new airplanes from the various airplane factories here in the U.S. to foreign destinations. These trips were sometimes new crop dusters to be delivered to the buyers–farmers in Central or South America. In those days, the delivery trip was bid by a ferry company, who paid, upon delivery, a flat fee to the pilot for flying it to its new owner. Needless to say, they did not spend lavishly on nice-to-have equipment like radios and such. These crop dusters, while new, usually had no comm or nav gear of any kind, only the required basic gauges for flight. Many flights were flown, hoppers full of gas, for thousands of miles with only a magnetic compass and a handheld Bayside radio that usually did not work well if at all.

A typical flight would go like this: pick up the new crop duster at the factory, fly to Florida, navigating using the magnetic compass and dead reckoning, stopping at airports without towers for fuel, then getting a green light from the tower to land at a busy South Florida airport. The aircraft would be made ready in a day or two with ferry tanks, or fuel lines run from the hopper to the wing tank via an electric pump in the cockpit, giving the aircraft about 20 hours range. Then, after a thorough weather briefing, 1960s style, and drawing lots of lines on WAC charts, filing the flight plan, whiz wheel and maps in hand, along with sandwiches and drinks, it would be off well before dawn, in the hope of making it non-stop to the destination if in Central America, or at least to the southern Caribbean if going to South America.

But one flight in particular had its own excitement not usually expected. We were a flight of two Piper crop dusters, flying from Fort Lauderdale non-stop to San Salvador, El Salvador. Departing well before dawn, and using the lights along US 1 and the Florida Keys to help navigate until daylight, then past Key West and hold the various courses on the mag compass for the next 12 hours or so; compass and clock, flying around the western end of Cuba and then on course for Honduras and the crossing of the mountains to El Salvador.

I had done this trip several times before, and knew that the mountains down there in the late afternoon would likely have their share of build ups and rain. But on this day there was no getting through, even after climbing to 17,000 feet and trying to find a gap. So, both aircraft turned around and headed back to San Pedro Sula, Honduras to land for the night.

That part worked out fine, except for the taxi in after landing where we were greeted by a few dozen soldiers, all pointing rifles at both aircraft and motioning for the pilots to get out. It turned out that Honduras and El Salvador had gone to war a couple of days prior to our arrival, presumably over a soccer match, but it was actually a border dispute. And the aircraft we were flying, unfortunately for the pilots (and the owner), had El Salvador registration numbers painted on their sides!

The Honduran Air Force was not amused that a couple of El Salvador-registered airplanes landed unannounced in Honduras.

During their brief conflict, the Honduran Air Force, flying F4U Corsairs, had shot down most of the El Salvador Air Force, who were flying P-51 aircraft we were told. And the Honduran military suspected us, the two ferry pilots, of possibly being either replacement pilots for their enemy, or flying in needed parts, or who knows what else they were thinking. Held incommunicado for three days, under constant guard, and frequently interrogated, I wondered how this would ever end, and would we ever get out of there! Later on we learned our flight plans were never closed; hence we were reported overdue and missing, causing no small amount of worry back home.

But, as all things do eventually come to a conclusion, this one did too. On the fourth day, we were rousted out of bed, and driven off to who knows where, hopefully not to prison, when unexpectedly we arrived at the San Pedro Sula airport, where we then expected to be deported on the next Pan Am flight to Miami. Instead, we were taken to our airplanes, still as we had left them, and told to get out of the country directly! But in no case were we permitted to fly to El Salvador.

So, we fueled up, filed flight plans for Guatemala City, and with a green light from the tower, off we went. We frankly were dumbfounded. Never did we expect to see these airplanes again. So, after departing, when we cleared the ridge a few miles to the west of the airport, knowing they had no radar back then, we took up a new course for San Salvador, arriving a few hours later. This leg of the trip was unremarkable, except for, on landing, having to dodge the holes in the runway at San Salvador caused by Honduran pilots who had dropped homemade bombs on the airport the previous few days.

Needless to say, the farmer who had purchased the airplanes was ecstatic to find out his planes had finally arrived. We did not have to pay for dinner, drinks, or the hotel that night. And the Pan Am flight to Miami the next day was one of the happiest flights I ever had.

I Can’t Believe I Did That #8
Scroll to top