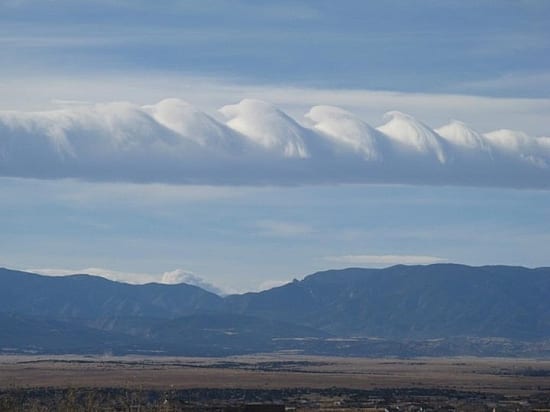 The big day had arrived and I was going to fly my wife, her sister, and my 13-year-old niece to the West Coast by way of the Grand Canyon. A check of the weather revealed a rather dynamic situation developing with instrument conditions along the first part of the route from Tulsa, Oklahoma, to Dalhart, Texas.

After that, the challenge would be contending with 25- to 35-knot winds as we crossed the mountains in north-central New Mexico. Oh yes, and there was a high wind warning for Dalhart later in the afternoon. I assured myself we would be long gone from there by the time the wind hit.

Sometimes those clouds offer clues about the ride ahead.

We departed IFR in my trusty 1978 Skylane RG and were soon enveloped in cloud as we made our way westward. The ride was smooth and everyone was happy. The clouds parted just as we begin our descent into Dalhart and the landing was uneventful. Another check of the weather showed little change from before. I was going to deviate north to cross the Sangre de Cristo range at Angel Fire, because the winds aloft forecast favored that route.

As I was fueling the plane, a friendly fellow from the FBO drove up and asked if I would like a bottle of water or a soda. He also asked if I would like to put the plane in a hangar. The wind was starting to pick up and 60-knot gusts were forecast. I took him up on his offer of a soda but decided it was time to beat feet out of there.

We climbed back aboard and took off. No sooner had we reached our initial cruising altitude than I noticed a large black mass of clouds rolling in from the north. Being VFR for the mountain crossing, I immediately started to deviate around to the southwest. At first it seemed like we were going to slip by with an end run and then a wispy finger of cloud appeared up ahead. Not thinking anything of it, I climbed an extra 2000 feet to get over the top.

All of a sudden our world started coming unglued.

The airplane felt as if it were being hit by a giant sledgehammer. My headset and glasses were flung from my head. We were strapped in and still hitting the ceiling. For the first time in my 41 years as a pilot, I was looking outside to see if the wings would stay attached!

Training took over and I started slowing to below maneuvering speed. The reduction in severity of the jolts was immediately apparent as the airplane slowed. The stall horn started sounding intermittently and the spike was taken off the sledgehammer blows. (I am now a great believer in the value of VA.) It was about another five minutes before I could let go of the controls long enough to find my headset and glasses.

After getting my headset back on, I called ATC and told them we had just gone through some pretty heavy-duty turbulence. I was asked if I would classify it as “severe” or “extreme”. Let’s see: headset flung off, aircraft almost uncontrollable, not sure the wings will stay on. I called it “extreme.” To be sure, the sector frequency was full of requests from pilots looking for smoother air. We continued to lope along at 100 KIAS until we had traversed the 70 or so nautical miles to Angel Fire. It was relatively smooth by the time we got to the mountains, with only the occasional large bump. After landing in Arizona, I halfway expected to see serious wrinkles in the wing upper surfaces but none were found. We continued on with what ended up being a very pleasant rest of the trip.

Below the pretty lenticular clouds, the rotor turbulence can be brutal.

What did we encounter? In the days and weeks that followed, I scoured the internet to see what I could learn about turbulence and its causes. I spoke with every pilot I knew to see if someone could shed any real light on the subject. There had been no strong up or down drafts of any duration. There was no convective activity in the area. There was, however a late season snowstorm off to the north in Denver that day.

Finally a friend who flies right seat on a Boeing 777 told me they often encounter mountain waves in that general area. Mountain waves can be accompanied by “rotors,” which could be described as a sort of horizontal tornado. Even though mountain waves can extend 150 to 300 nm downwind, there does not seem to be any firm information on how far downwind a rotor can form. My conclusion is that we found ourselves in a rotor. However, I cannot say for sure what caused it. It may have been part of a mountain wave, or part of the gust front coming from the north, or a result of the confluence of both. I never want to go through one again regardless of what it was.

What is the moral of the story? What I can’t believe is that I didn’t listen to the nagging voice inside my head that said this was going to be a marginal situation and I should not mess with it. While it did not unfold as I might have expected, the fact remains I put myself and my passengers in jeopardy by not erring on the side of caution. There is a judgment call associated with every flight, and that go or no-go decision must be based on the firm conviction that no schedule is worth dying for.

Dan Littmann is a software manager in the flight simulation field. An airplane aficionado since childhood, he has a Commercial license with SEL, MEL and Instrument ratings. He was fortunate enough to log time in some 36 types of light aircraft during the late 70s and early 80s.