Blog - Latest News
You are here: Home1 / Article Archive2 / Dick's blog3 / A flight well flown: you be the judge 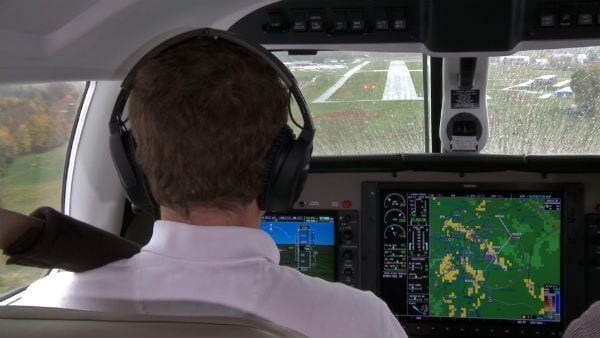 After every landing we’d all like to hear that it was a flight well flown, even if the pronouncement comes from self. In the past, I have written articles about self-grading of all flights and have always thought that a pilot can be a great judge of himself—if he is objective.

I have been researching and writing about general aviation safety, or the lack of it, since 1958. In the process of doing this I have read every available report on fatal accidents.  As a result, I have knowledge of what happened when an airplane winds up in a heap as a result of a flight poorly flown.

The FAA can’t make us safer, and neither can all that glass. It’s up to the pilot in the left seat.

What is lacking is knowledge of why these accidents happened. I know, “pilot error” leads to about 85-percent of the events. The elusive thing is what leads the pilot to err.

The subject becomes more fascinating as pilots get all manner of new equipment that has the potential of making flying safer. Trouble is, it doesn’t. Airplanes with every bell and whistle, including an airframe parachute, don’t show any improvement in the fatal accident rate that has remained stubbornly stuck for years.

The FAA is not capable of offering anything good here and so far the “industry,” as we used to call it, isn’t either. At least not much help has come from either source.

In the end, pilots have to figure this out for themselves. To accomplish that, pilots have to want to do it and I question the level of interest in this among the pilots flying the new high-tech airplanes. Many simply don’t want to hear about safety. They bought the latest and greatest and they met the training and checkout requirements of the manufacturer, FAA, and insurance company so that should take care of it. Give the subject not another thought. Don’t we wish that it could work like that?

The elephant in the room is risk. Nowhere in the formal training process do we make certain that pilots understand the risks, which you have to do to get flights into the “well flown” category.

I always like to think of risk as being lowest when flying a well-maintained airplane over the Great Plains on a calm day with no clouds and no obstruction to visibility. Any negative factor will increase risk and pose a challenge to the pilot.  To manage that risk, a pilot has to understand the nature of the beast. The old wives’ tales have to be swept aside and an understanding of risk has to be based on facts. I’m going to use a couple of flights, and the thought processes that went into risk management, to illustrate how this works.

The mission was to fly from our base at Hagerstown, Maryland, to Allentown, Pennsylvania, to pick up another couple and then fly to Ottawa, Canada, for a pleasant outing.

The weather on this September day was scuzzy, at best, with the remnants of a tropical system draped over the route. Inclement weather is a substantial risk factor.

Another risk that has raised its ugly head here is failure to ascertain that the runway is the one you think it is, and that you are where you think you are on the runway. That sounds simple but pilots of all experience levels flying most all airplanes, including airline jets, have come a cropper when failing to eliminate this risk on foggy departures.

The next factor would be a mechanical problem on or shortly after takeoff. That is managed with good maintenance and a plan. The first element is to monitor the engine readings and sounds as the power is advanced and reaches full power. If that is good, then chances are it will run for a while. If everything is not perfect, time to abort. That works on clear days, too.

If the power were to fail during initial climb, pitch down, apply full flaps, establish a 75-knot glide and be glad the departure area is farm land. I used to be based at Linden, New Jersey, an airport that was surrounded by tightly packed hazards. The risk after a power loss at Linden on a clear day would be more challenging than that found on a foggy morning at Hagerstown. Neither would be a piece of cake and would be bloody-nose time at best.

I did low-visibility takeoffs the same as night takeoffs. Track the centerline until five knots above the normal rotation speed, rotate, retract the gear at a positive rate of climb then concentrate only on wings-level at the proper pitch attitude until 1,000 feet above the ground. After that, the power reduction and flaps retraction and adherence to the clearance could be addressed. A not infrequent accident cause on instrument departures is flying back into the ground. Another is a loss of control during initial climb. Precise flying and good aircraft control takes care of these things.

Is that instrument takeoff safer in a twin? Probably not.

I have said it before but I do believe the primary value found on a twin is related more to ego than anything else. There is nothing wrong with that. A powerful and lively twin is  just a lot more fun to fly than a sluggish single. A twin on one engine, though, is many times worse than that sluggish single.

When we got to Allentown, the ceiling was 300 feet with visibility reported as one mile. That is no hill for a stepper but they changed the runway in use when we were pretty close and I knew that this is a well-proven risk with many broken airplanes to show for it. The risks come from incorrect setup for the new approach, a loss of situational awareness, and simple confusion.

Back in the good old days, the only action required would be to select a new frequency for the ILS. In the more modern age it requires a new program in the navigator. This has to be done deliberately and this day I was going to call a time out and come around again if I couldn’t get the new approach programmed and double-checked without rushing.

That all worked out and the approach went well. We were soon flying toward Ottawa.

There was a lot of rain with some heavier showers to dodge. Sure, the least risk is when the sky is clear but this day the en route workload was low, helped by the electronic information on the panel.

The Ottawa weather was advertised as a ceiling of 400 feet with two and a half miles visibility in light rain. It was an ILS approach and I doubled down on checking and verifying everything. Flying in unfamiliar territory adds some risk to the operation and the only way to manage that is by checking everything twice.

At the end of our trip, my passengers were happy and I was satisfied it had been a flight well flown. I had considered all the risks and managed the relationship between the airplane, the weather and the air traffic control system on what I would call a relatively complex day.

This is not a travel piece but Ottawa is a nice place to go with one of the old Canadian Pacific Railroad hotels right downtown, near the government buildings.

When I consider the challenges found on those flights, I can’t see much in common with the check-out and type-specific training that is required by the various interested parties. It is like the difference between the theoretical relationship a football fan has with the game and what the players on the field have to do to win. Eating hot dogs and drinking beer and watching is a lot different than dodging behemoth players from the other team in an ever-changing scenario.

It has always been easy for me to understand that there are risks in flying. When I was actively engaged, I averaged losing one friend or acquaintance in an airplane every year for over 50 years. That is a lot of folks. Virtually all were lost because they took a risk and couldn’t handle it. Many were excellent pilots and in a few cases we never were 100-percent sure of what happened.

It is really pretty simple. Think about all the risks at hand and don’t go or continue on unless you are confident you can manage those risks and come away thinking it was a flight well flown. Among the thoughts in flying that come on ill-fated flights, “I think I can make it,” is high on the list.

Are you a plain cheesecake pilot?
Scroll to top