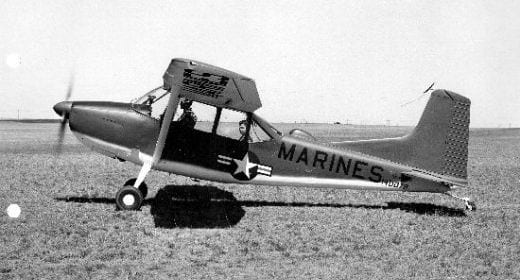 In 1954, just after the cessation of hostilities in the Korean war, the Marines wanted an improved model of Cessna’s L-19 Army Liaison/Observation airplane (the Navy/Marine designation for the L-19 aircraft was the OE-1).

The new one would have more protection for the crew and higher cruise performance while maintaining the L-19’s excellent takeoff and landing capability. The Marines only wanted a few of these good airplanes, and they were willing to pay–quite a bit more–for them.

Cessna’s simple but tough L-19 was the starting point for the OE-2.

I don’t specifically remember the contractual arrangement (as an engineer I probably wasn’t advised), but it went something like this: build an airplane that meets our specification and certificate it to Civil Air Regulations, and we’ll buy 25 of them. In this regard it was deemed to be an upgraded version of the L-19, and in our terms a derivative of it–a new airplane using an existing airplane as a design base.

The normal expectation is that the pair will have some common major components. We started our project with the development model designation M321 (the L-19 was our development model M305–and was already in production when I joined Cessna in the fall of 1951).

The Model 321, which would become the OE-2, thus was to be, like the L-19, a military airplane designed to commercial flight characteristic criteria–with one difference in the order of things, mentioned below. The 305/L-19 had won a fly-off competition against several rivals in the spring of 1950, and by plan its production would proceed after having that already winning configuration certificated.

As an aside, that award based on the fly-off was contested because Cessna had ignored a limit on the horsepower the competing airplanes’ engines were allowed to have. Cessna knew the takeoff (and landing) performance desired (600 feet over a 50 foot obstacle) couldn’t be met with that small an engine.

The award was made to Cessna despite that deviation from the rules. That may have been because the Korean war started just a little later in 1950 and the Army needed immediate replacements for its aging WWII ragwing L-4s and L-5s, and implementing the already flying, and better performing, Cessna 305 was a quick way to do that.

My summertime job in 1951, just before joining Cessna, was building replacement wings for that same L-5, then still in service in Korea. The job was with a small aircraft company in Wichita, called Rawdon Brothers, located on an airport they operated literally across the street from (my) soon to be rival Beechcraft.

The L-19 was the Army’s first all-metal liaison aircraft and was expected to be longer lived than those airplanes it replaced. I seemed to be establishing, with the ancient L-5 and the nascent OE-2, a broad familiarity with this type of airplane. My involvement with the L-19 itself was in between my quite different work on those two other quite different liaison airplanes, and happened around 1952-53. It consisted of some minor contributions to an XL-19 project trying out two turboprop engines for the Army’s then current version (which project was not very successful, overall, though one turbine-engine version set an altitude record for its weight class).

Back to the OE-2 story, the 321 agreement was different in two respects. There was no competition because the project was a model change to the L-19/OE-1, and the production contract award was to be made only after the configuration was designed, flown and certificated. It wasn’t as sure a thing as having won a fly-off, but on the other hand there wasn’t any immediate competition to worry about either.

What we had to worry about was meeting that specification for the desired improvements. I remember more about the “hardware” requirement for added shielding against enemy fire–armor plating and flak curtains–than the numerics of the performance upgrades, which in any case were going to be more difficult to achieve with those heavy additions to the fuselage structure and the enhanced protective measures.

What was pretty obvious was that we would need an even bigger engine, and while the L-19 had a fixed pitch prop selected for takeoff requirements (and with it the necessity to just accept a compromised cruise capability), the speed upgrade for the 321 demanded a constant speed prop that would serve both takeoff and cruise needs. But to assure that takeoff performance was maintained we elected to increase the diameter of the propeller and gear the engine to reduce propeller operating RPM’s for all flight conditions.

With the higher horsepower and larger prop, it was felt necessary to have a more efficient straight-edged and high-aspect ratio empennage, rather than the old elliptical type left over from the 170 (and 190) era and incorporated on the L-19. (I also designed–maybe guessed at is a better description–a good sized dorsal fin we felt was needed for the OE-2 configuration, as well.)

It’s worth mentioning here that the L-19 was itself a derivative of the in-production Model 170, initially with the major changes made to the fuselage (starting with the cabin area) to accommodate the observation mission of the airplane. So at this point the OE-2 was to be at least a double derivative airplane.

But with the airplane’s increased weight, and a requirement for more range than the L-19, we just incorporated the existing Model 180 wing right into the OE-2 configuration. However, the flaps were stipulated to be electrically operated, instead of having the manual kind as on the 180, and the fuel tanks were made self sealing. While I think I remember designing a new rectangular shaped (square) empennage for the OE-2, it was at least modeled on the similar configuration of the M180.

So did this make the M321/OE-2 a triple derivative (first from a commercial 170 to a military L-19 and from that to using the somewhat modified M180 wing and an empennage fashioned after that of the M180, too?

The OE-2 was a niche airplane, but quite a performer.

To round this idea out, we may have started the 321 design with the sensible thought of using the L-19 fuselage, but with the higher gross weight, added protection against enemy fire, a cowling modified for a new, and geared, engine and accommodating a different wing and empennage, what was left of this thought?

Reviewing, here’s what we then had with the OE-2:

See why I call it a mishmash military model? What was rewarding was that, despite all the conglomeration, the certification process was trouble free–I can’t remember even one problem that came up.

Of course many of our commercial airplanes became military ones, though without much change to them except their designation. Examples are the Cessna 195, 310, 172 and 185 (that last one shortly after my time) which were bought truly “off the shelf.” And a reminder that there is one other, actually more prevalent, system for formal approval of an airplane design for military uses–qualification to military standards. Cessna was required to use that procedure on the twin jet T-37 trainer.

There is one other major departure to mention for the OE-2. Even though it met the Marines’ spec and performed admirably–it was a pretty successful mishmash–they only bought about 25 to 27 of them. That last is a figure that I’ve seen reported, and I don’t know if the prototype is included in it.

It’s the only airplane I worked on that was stated as limited production from the start and stayed that way. (I exclude the M620 which, to my chagrin, never got past the prototype stage.) Incidentally, over the years almost 3500 L-19’s were ultimately built–the production line was closed down and then opened again more than once. Users included three branches of the U.S. military and those of many foreign countries. Only the U.S. Marines flew the OE-2.

So how much better did their OE-2 perform than the L-19? Its level high speed was about 40% better, achieved with 24% higher rated horsepower, and its range almost 50% greater, due to about 15% more usable fuel and much better cruise efficiency. It was opined that the L-19 speed was about right for “observing” missions, but maybe the OE-2 was better for getting out of there and getting further away. And it still could be throttled back and operated efficiently when the mission required it.

But the OE-2 was not well known. At the time of the Vietnam war I saw a photo in Aviation Week of a liaison/observation airplane being used there. The caption under the photo said it was an L-19. Its square tail said it was an OE-2.

The perfect copilot–of many years

Make a case for your airplane
Scroll to top