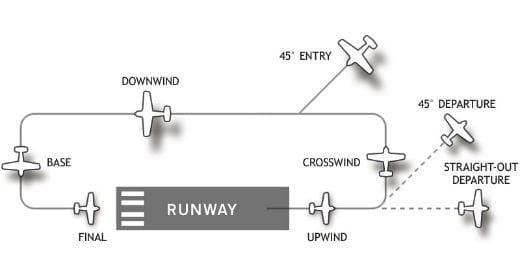 Is this the law, or just a suggestion?

The vast majority of airports in the United States (some 20,000) have no control tower, a fact that shocks many non-pilots. But the traffic pattern at these airports usually operates quite smoothly, with pilots flying prescribed routes and announcing their positions on CTAF.

But do you have to fly the classic four leg pattern? Surprisingly, the regulations do not offer a clear cut answer. FAR 91.113 offers a few words about right-of-way rules in the pattern; FAR 91.126 tells us to make left-hand turns unless otherwise noted; and FAR 91.127 doesn’t have much to say other than read 91.126. The Aeronautical Information Manual, while not necessarily the law, offers more detail in section 4-3. But still, a pilot is left with suggestions more than a commandment that “thou shalt always enter the pattern on downwind.”

So what if you are approaching the runway head-on? Should you fly the standard pattern, entering on a 45 degree leg, then flying downwind, base and final? Many pilots say no, and will fly a straight-in approach and land. Their theory is that it’s both easier and safer, since the straight-in gets you on the ground faster and eliminates potential traffic conflicts entering the pattern. Other pilots disagree, arguing that the system only works if everyone plays by the same rules.

What do you say? Is it ever acceptable to fly a straight-in approach at a non-towered airport? Why or why not? Add your comments below.