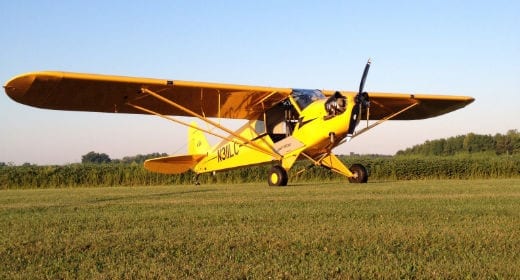 Grass strips are where Cub memories are made.

Hang around pilots long, and you’re sure to see someone get all teary-eyed about the J-3 Cub, Piper’s venerable taildragger that turns 75 this year. That yellow color, the open door, the grass in the tailwheel–it’s all part of the mystique, supposedly remnants of the Golden Age of aviation.

But for a while, I just didn’t get it. The Cub seemed old fashioned, small, slow, drafty and hard to fly. What’s to love?

That embarrassingly naive opinion changed one sunny Saturday about 15 years ago, when I was a student pilot. I had soloed but I had yet to take my checkride, and my father (who is also a pilot) took me up to a local grass strip. This was to be my introduction to “real flying,” he said. Typical old-timer BS, I thought. How much fun can you have at 70mph?

As it turned out, quite a lot.

To start with, I hadn’t just landed at some random “grass strip.” I quickly learned that Red Stewart Field (40I) in Waynesville, Ohio is practically the living legacy of Piper’s Lock Haven factory. It was founded in 1946 by a legendary barnstormer (the airport’s namesake), whose favorite trick was to throw the control stick out the window of his Cub in flight and land the airplane with only power and trim. The airport is still family owned today, and has operated Cubs continuously for over 60 years.

With this impressive history starting to sink in, I walked out to one of the flight school Cubs with an instructor. Right away, I noticed something was different from my Cessna 172 lessons–my hands were empty. I had no flight bag, no charts and no headset, and that was uncomfortable for me. But the truth is, I didn’t need any of those things for the type of flying we were about to do. I only got more nervous when I saw the instrument panel, with about 4 gauges total. I would soon learn to love this simplicity.

The next 45 minutes are among the best in my logbook. I learned how to hand-prop an airplane (do it slowly and carefully), how to communicate in an airplane without a headset (shoulder taps and hand signals work) and how to taxi when you can’t see anything (stick your head out the window). Most enjoyably, we visited runways I had flown over numerous times during my regular lessons, but I didn’t know existed. Many of them barely qualified as runways, nestled between rows of corn in farmers’ fields, but they were comfortable for the Cub. More than once, I thought we were making an emergency landing, only to watch the instructor turn at the last minute and put down on a hidden, 1000 ft. runway.

It was an eye-opening event for me. Low and slow really could be fun, I learned, and the Cub had a lot going for it. I decided I needed to fly a Cub more often.

The Legend Cub is one of the bestselling LSAs, proving how timeless the Cub design is.

But for a variety of reasons, it didn’t happen and I went years without sitting in a Cub again. I began to fly a Citabria a lot, and I told myself that was the same as a Cub–after all, it was a fabric-covered taildragger. In reality, it’s not the same at all, and recent events have proven how wrong I am.

Recently, I’ve had the opportunity to get reintroduced to the Cub, in the form of the Legend Cub (Sporty’s sweepstakes airplane next year). This modern version of the Cub packs all the fun of the original, but fixes some shortcomings (and yes, the Cub has some). The fuel is in the wings now, allowing you to fly from the front seat, the doors open on both sides and a 100hp Continental engine offers a lot more power than the original.

In spite of these modern conveniences, the Legend Cub is still very much a Cub. On my first flight in the new airplane, I was instantly transported back to that summer day at Waynesville. The cruise speed was still slow, the takeoff roll was short and the views still incredible. I’ve since spent many memorable mornings at a local grass strip with this Cub. And while I love that Citabria, there’s something unique about the Cub.

Cub fever really hit when I began to re-read Flight of Passage, Rinker Buck’s classic book about he and his brother (both teenagers) flying their rebuilt Cub from New Jersey to California in 1966. It’s surely one of the classic books about flying: emotional but not sappy, technical but accessible to non-pilots. As I’ve re-read the book with more Cub time in my logbook, it’s obvious that this could only happen with a Cub. While the relationship between the two brothers is the key theme, the story wouldn’t be worth telling if the airplane hadn’t been a Cub. Can you imagine two teens rebuilding a Cirrus?

Whether it’s an old school grass strip, a new LSA or a great book, the Cub is a constant in the turbulent world of general aviation. It’s still what most non-pilots think of when they see a small plane. And it’s not just nostalgia–75 years after it was born, the Cub is still a bestseller, leading the pack of Light Sport Aircraft in sales. It’s truly timeless.

It’s not much, but the Cub panel has all you need.

So what is it about the Cub that makes it universally appealing? Simplicity is certainly part of it. Like an old car, almost anyone can work on one, and when it comes to flying it checklists are almost a luxury. It’s as close to an everyman airplane as we’ll ever have. But it’s also honest. The Cub isn’t the fastest or the best-looking airplane, but it’s not trying to be. It does one thing (fun) and it does it well, never trying to fulfill multiple missions. It’s an airplane you can get to know, but one that keeps you on your toes.

There’s a lesson here for most of us: when it comes to pure fun, less really is more. Don’t get me wrong: if I’m headed to New York IFR, I want as many bells and whistles as I can get. But for recreational flying, which is what many private pilots do, the Cub proves that you can have more fun with less equipment–even in 2012.

So next time you’re flying for fun, whether it’s a Cub or a Cherokee, turn off the GPS, open the window and pull the throttle back–there’s no reason to hurry when you’re not going anywhere.

Threat and Error Management: a primer

The Great Debate: are straight-in approaches OK?
Scroll to top