Loss of control (LOC) is a stealthy, deadly predator. On April 7, 1979, an ENT surgeon I knew personally departed Chicago’s Midway Airport for Atlanta, Georgia. The good doctor had filed an IFR flight plan and loaded his family into N17994, his Beechcraft B58TC Baron. Over Kankakee County, Illinois, while attempting to climb above the weather, he lost control. All six occupants were killed. The engine blocks were buried several feet below ground level.

In WWII, my dad flew 44 missions as a navigator in the 8th Air Force. After the war he became a physician and a private pilot. His comment about the deaths of the ENT surgeon and his family is etched in my memory: “Flying can go all to hell in an instant.”

In John Zimmerman’s Sept. 12, 2022, article What does “loss of control” mean? Probably not what you think, he wrote: “…sadly, there are no easy fixes—no cutting edge avionics, no special training maneuver, and no FAA regulation can save the day.” In CP Jois’s April 9, 2020, article Flight simulators, safety, and the power of AI, he wrote: “We are now at the cusp where combining capable simulators with high-powered compute environments can enhance safety in aviation. Consider this—can flight simulator data tell us more about yet to be known opportunities that can improve airspace safety; or tell us more about how to prevent loss of control incidents; prevent communication lapses from turning into serious issues?” 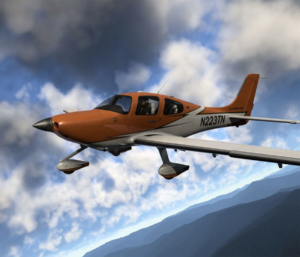 Modern flight simulators are more than visually stunning; they are also aerodynamically accurate.

In this article, using data generated by a flight simulator, we describe a possible aerodynamic solution for LOC.

For 15 years, we have explored the capabilities of Laminar Research’s X-Plane. This software contains three modules: a flight simulator named X-Plane, an aircraft design module named Plane-Maker, and a module to create airfoils named Airfoil-Maker. We came to realize the flight simulator module, X-Plane, is sophisticated and accurate. Each wing, horizontal stabilizer, vertical stabilizer, and propeller blade is divided into “blade segments.” Many times a second the “… linear and angular velocities, along with the longitudinal, lateral, and vertical arms of each (blade) element are considered to find the velocity vector of each element. Downwash, propwash, and induced angle of attack from lift-augmentation devices are all considered when finding the velocity vector of each element.”

A flight data recorder subprogram creates data files that can be exported into Microsoft Excel and displayed in graphic form. The aircraft design module, Plane-Maker, allows the user to re-create existing aircraft and to create new designs that can then be flown in X-Plane. Jeff Lewis wrote an excellent overview of X-Plane as an engineering tool.

Precision Flight Controls and Gleim offer FAA certified Basic Aviation Training Devices (BATDs). These consist of a personal computer, hardware flight controls, and X-Plane software bundled together. The performance of each aircraft included in the bundle must be within 5% of the published performance numbers for the same aircraft in the real world. Time using these devices, with restrictions, can be part of private pilot training, instrument training, and meeting IFR currency requirements.

Thirty eight universities use X-Plane in their curricula. In 2017, the University of New South Wales at the Australian Defense Force Academy evaluated the accuracy of X-Plane. Their report states: “…an Aircraft Design Spreadsheet and MATLAB were used to generate an aircraft model in Plane Maker that could be altered and manipulated as required. This aircraft was then put through a series of flight tests in X-Plane in order to analyze its performance characteristics. The flight tests were proven to produce results within 3% of real-life data…”

Airliners need a large, highly cambered wing for takeoff and landing and a much smaller, thinner wing for efficient high speed cruise. Airliners solve this problem by having wings incorporating high lift devices: leading edge slats and trailing edge flaps. These are extended during takeoff and landing and are retracted during high speed flight. As a result, airliners’ wings are complex and expensive. 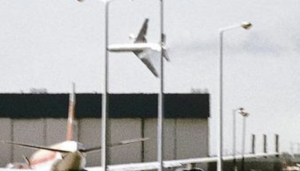 While mechanical failure of high lift devices is uncommon, the results tend to be catastrophic. In 1979 an American Airlines DC-10, American Airlines Flight 191, crashed immediately after takeoff from O’Hare International Airport. In order to reduce maintenance costs, American Airlines did not follow McDonnell Douglas’s maintenance procedure when removing an engine and its pylon from a DC-10’s wing. The correct procedure was to remove the engine from its pylon and then remove the pylon from the wing.
American Airlines decided it was okay to remove the engine and pylon en bloc. This resulted in cracks of the pylon-wing attach point. During Flight 191’s takeoff roll, the left pylon wing attach point failed and the engine/pylon departed the aircraft, ripping out the hydraulic lines to the left wing’s high lift devices. The left wing’s leading edge slats and trailing edge flaps retracted, while the right wing’s high lift devices remained extended. Asymmetric lift caused caused Flight 191 to roll to the left and crash. 271 passengers and crew died.

Using Plane-Maker and X-Plane, we began looking for an aircraft configuration with low takeoff and landing speeds and fast cruise, without using high lift devices. The breakthrough came when we tested a triple tandem wing (TTW) configuration where the middle wing has a symmetrical airfoil and an angle of incidence (AOI) of zero degrees:

The TTW configuration allowed us to achieve STOL landing and takeoff speeds and fast cruise speeds, without using high lift devices. Compared to current aircraft, the TTW would be less complicated and expensive to build and have fewer points of possible structural failure.

The TTW configuration is applicable to airliners, cargo planes, lightplanes, and light sport airplanes. Here are some images of an LSA-compliant, Triple Tandem Wing aircraft created in Plane-Maker: 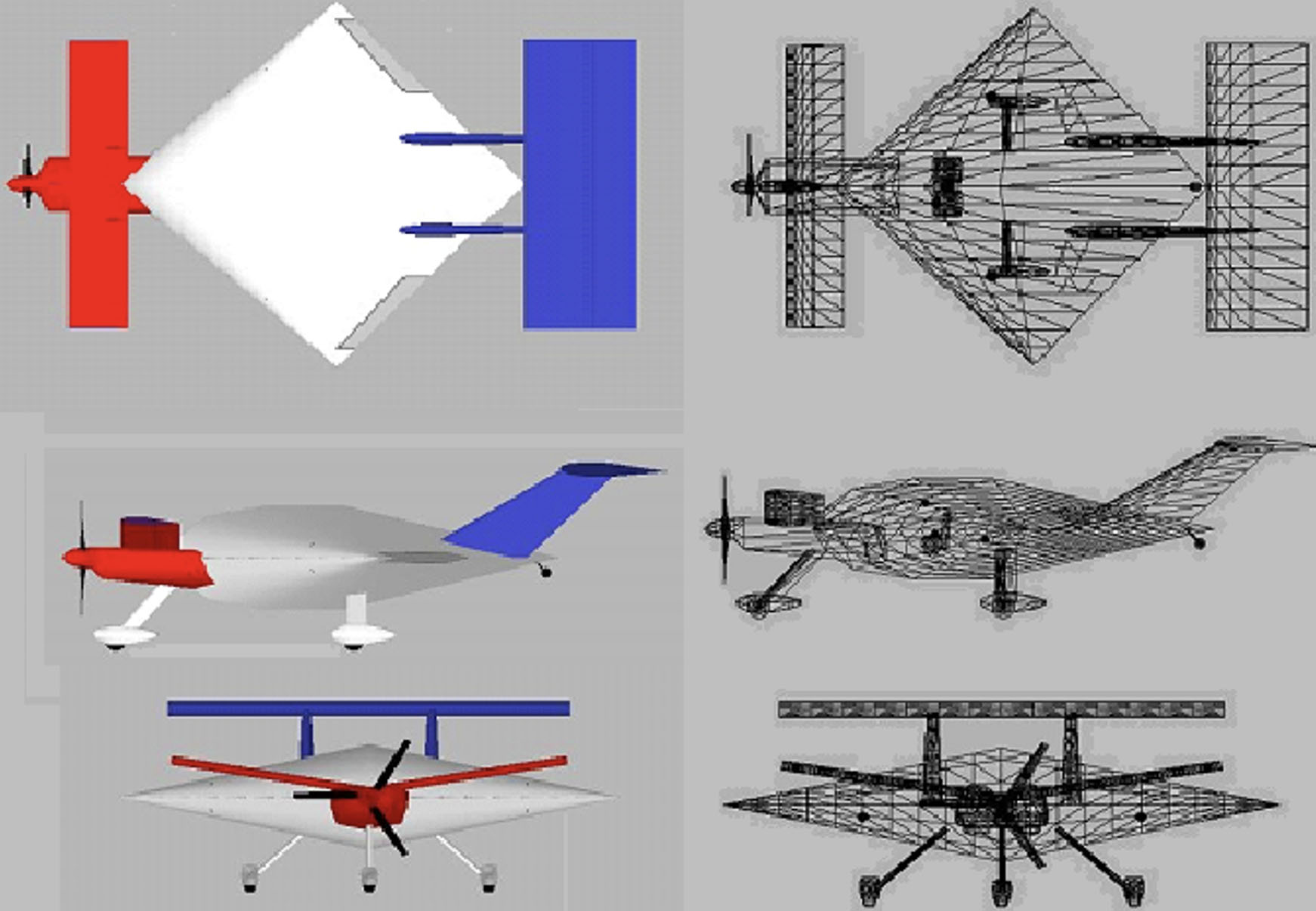 For comparison, a Van’s RV-12 aircraft was downloaded from X-Plane.org, a large user community, to compare its performance with the TTW LSA. Both planes were powered by Rotax 114 turbocharged, 115 hp engines and identical constant speed propellers. Vmax of both aircraft were determined in identical meteorological conditions, an altitude of 10,000 ft. MSL, and 100% of rated horsepower. The resulting maximum true airspeeds were 146 and 136 knots, respectively. 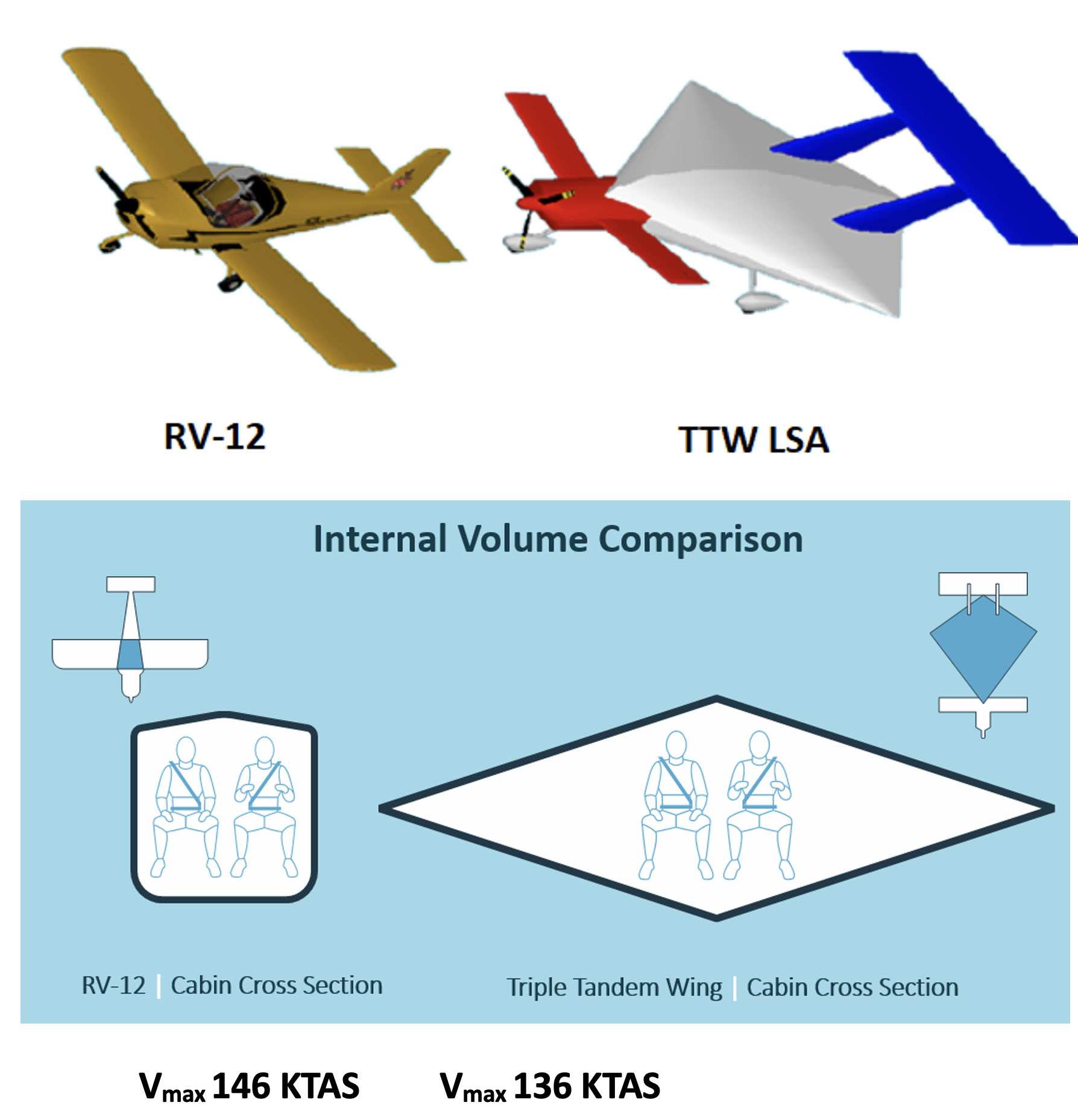 The following graphs were generated by importing X-Plane flight data data files into Excel and displayed in graphic form: 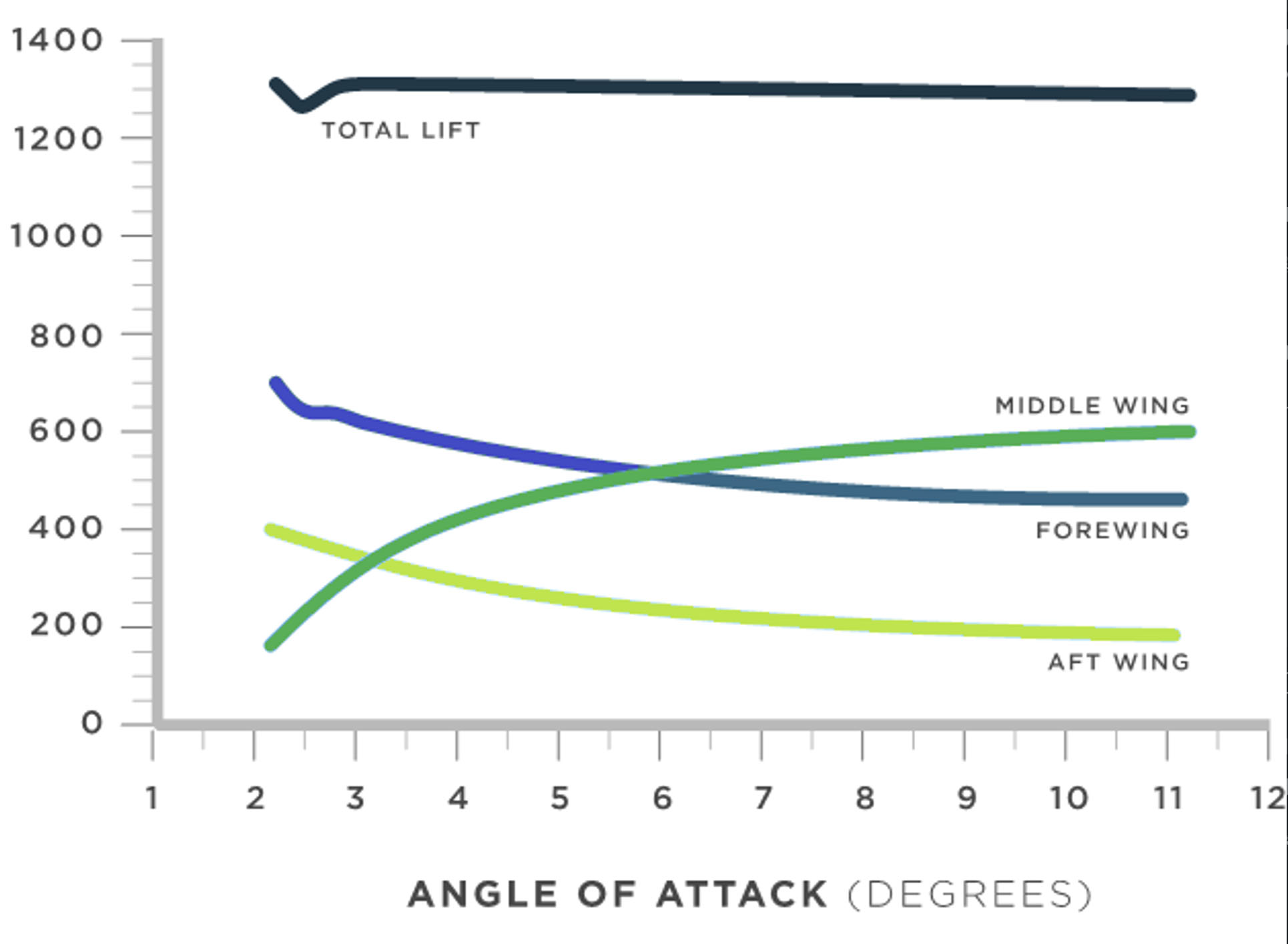 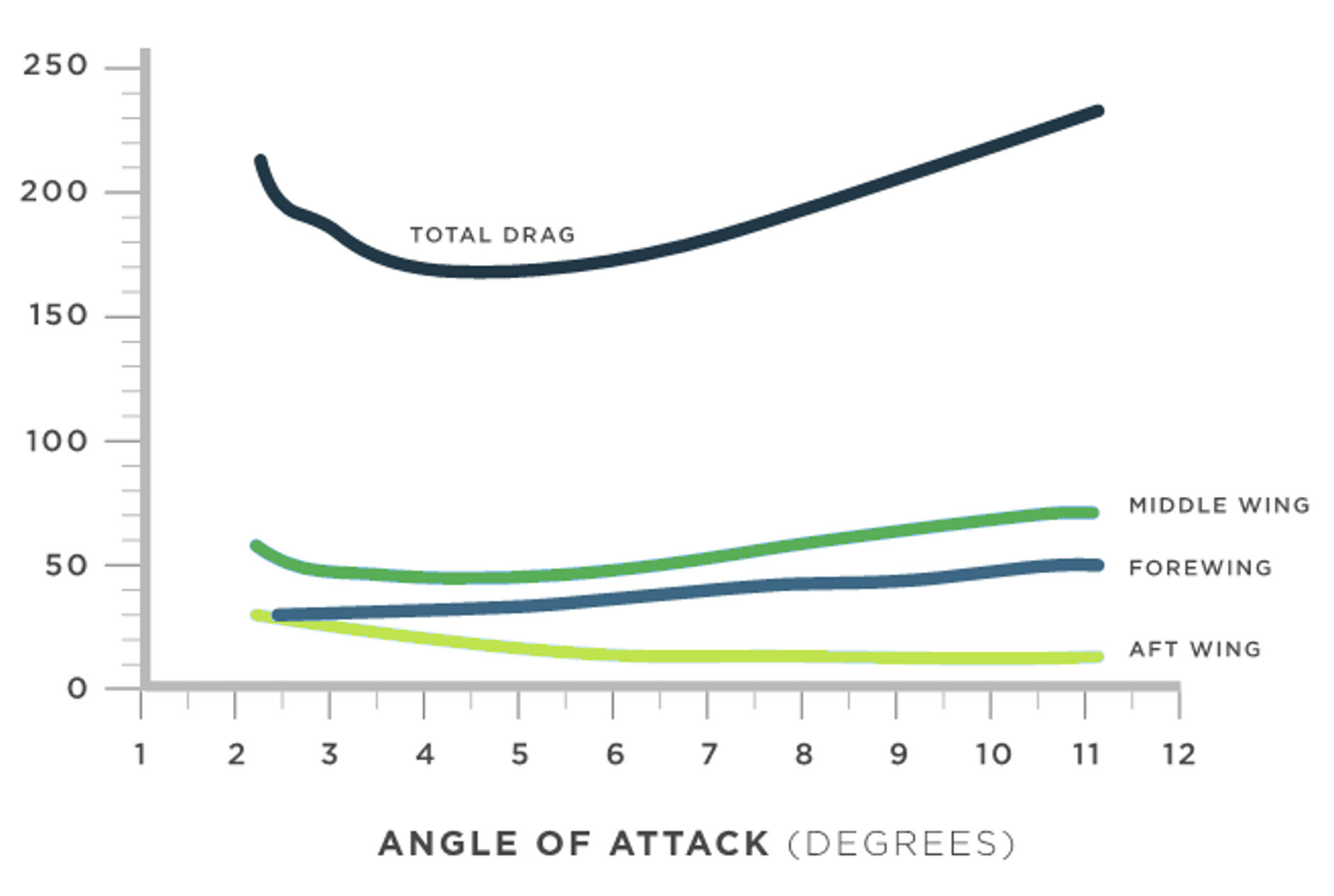 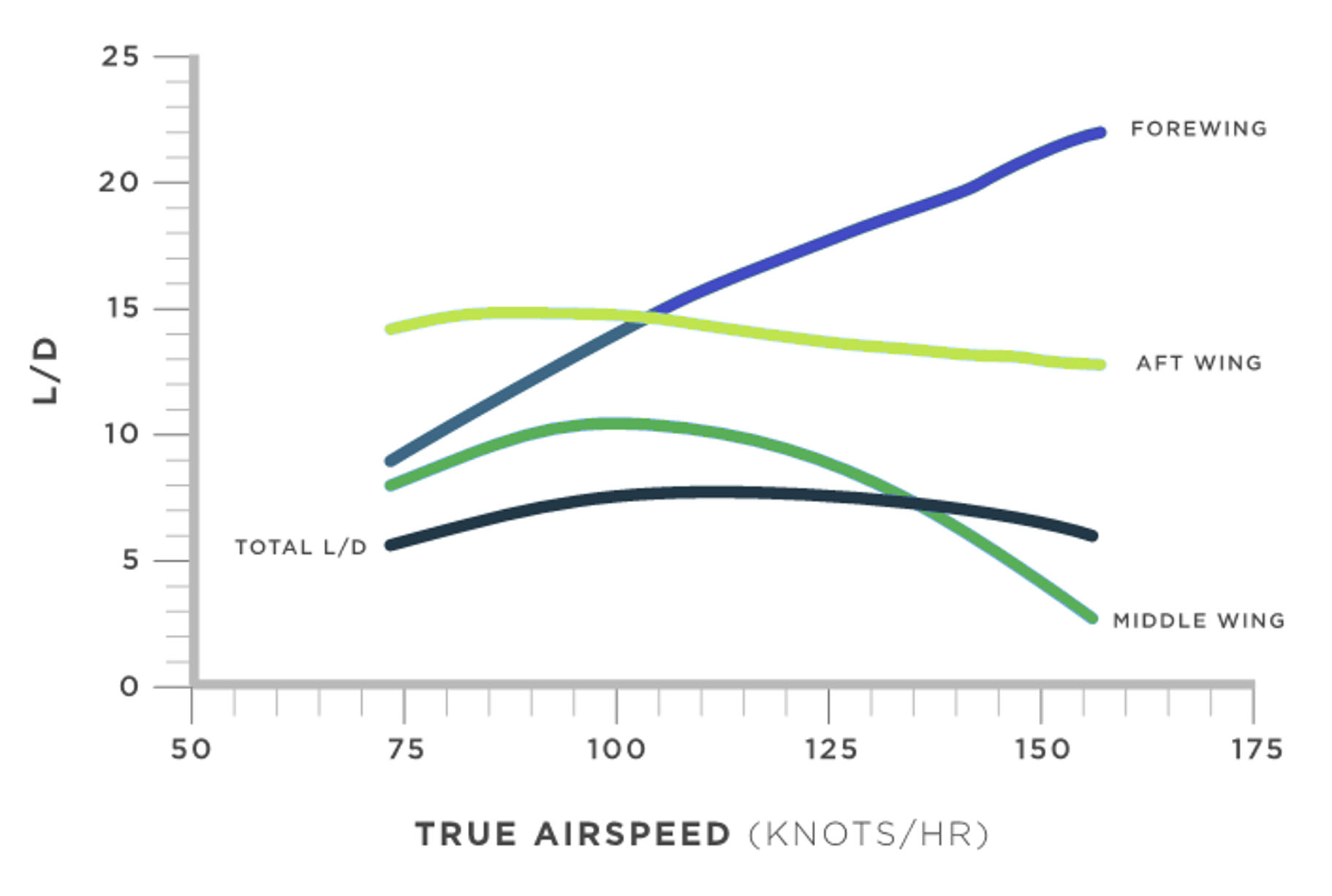 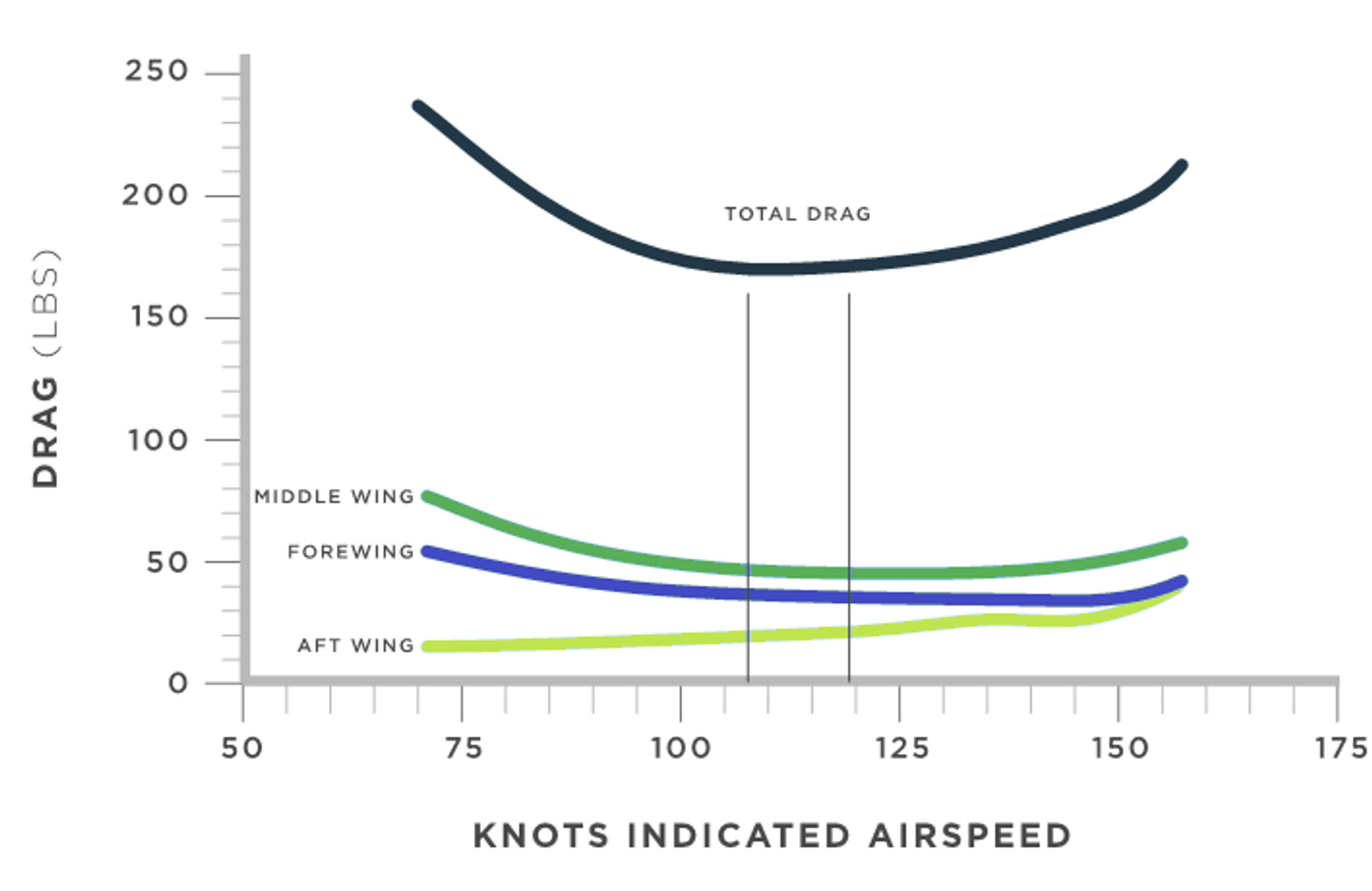 Here is where passive recovery following loss of control (LOC) enters the picture. Much to our surprise, the TTW LSA design does not stall nor spin. Power on or power off, pitching the nose up to and past 90 degrees never results in a stall. Instead, airspeed decays into a tail slide and LOC. All manner of unusual attitudes can ensue. Fortunately, recovery from these unusual attitudes always occurs with the following control inputs:

Recovery from LOC for the TTW LSA was tested, at gross weight, for centers of gravity ranging from +12.0 to -12.0 inches from datum. All unusual attitudes converted into a stable, deep stall with an AOA of 65 degrees, <20 KTAS and descent rate of 35.6 kts (3600 ft/min). Easing back pressure on elevators always returned the aircraft from the deep stall to normal flight.

Below is a four-minute video of the TTW LSA attempting to stall, entering a tail slide, LOC and return to normal flight:

Following LOC in clouds, contemporary aircraft tend to exit the clouds’ base pointing straight down with airspeeds in excess of whole airplane parachute deployment parameters. The TTW LSA can recover from LOC with zero visibility, a non-functioning pitot-static system, and a non-functioning electrical system. In a full, deep stall, the TTW LSA’s forward airspeed is <20 knots, and descent rate of 35.6 knots. These numbers are survivable, especially if the TTW LSA aircraft is equipped with four-point harnesses, airbags, energy absorbing subflooring, and a roll cage structure. Adding a whole airplane parachute system would add an extra layer of security. 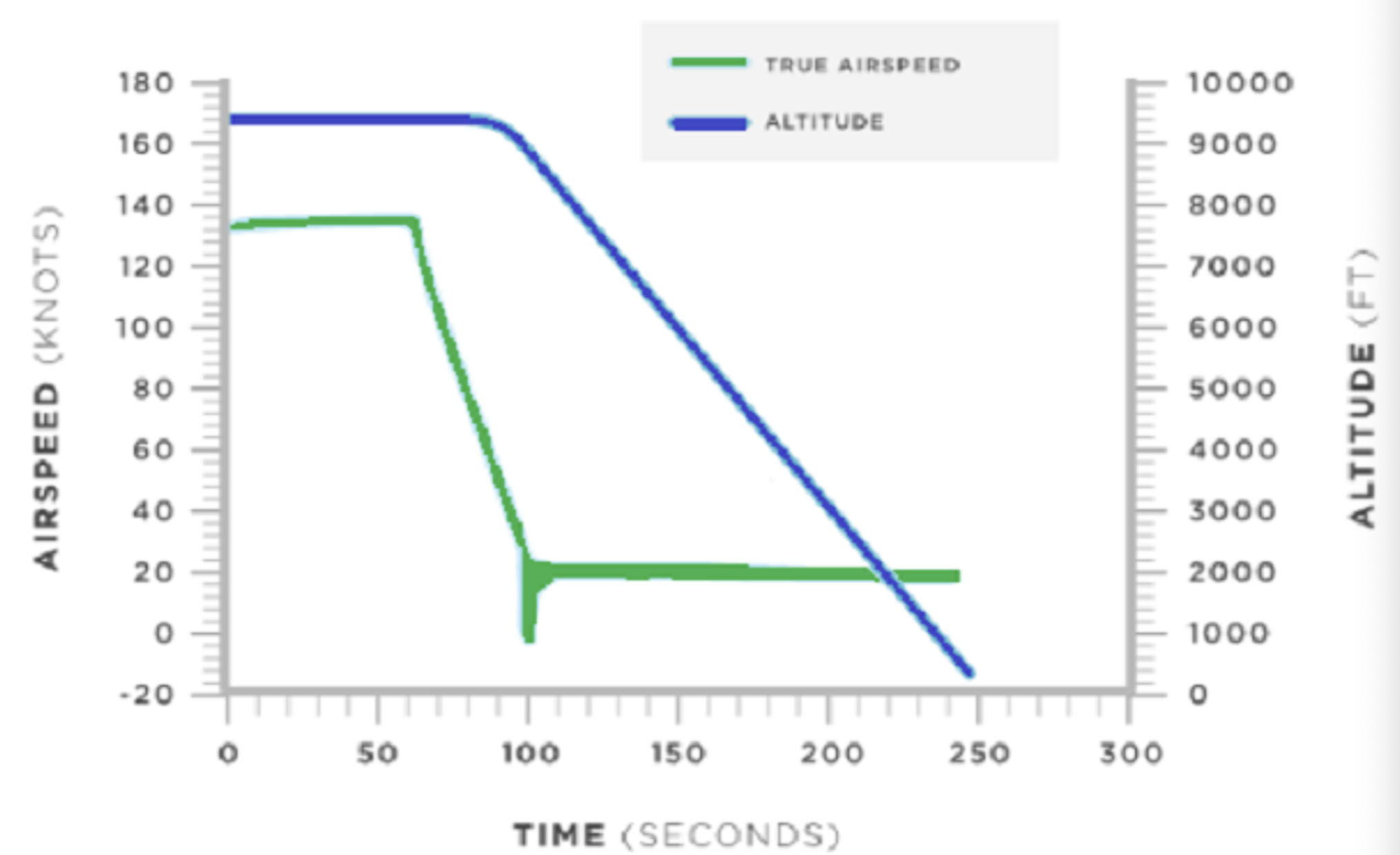 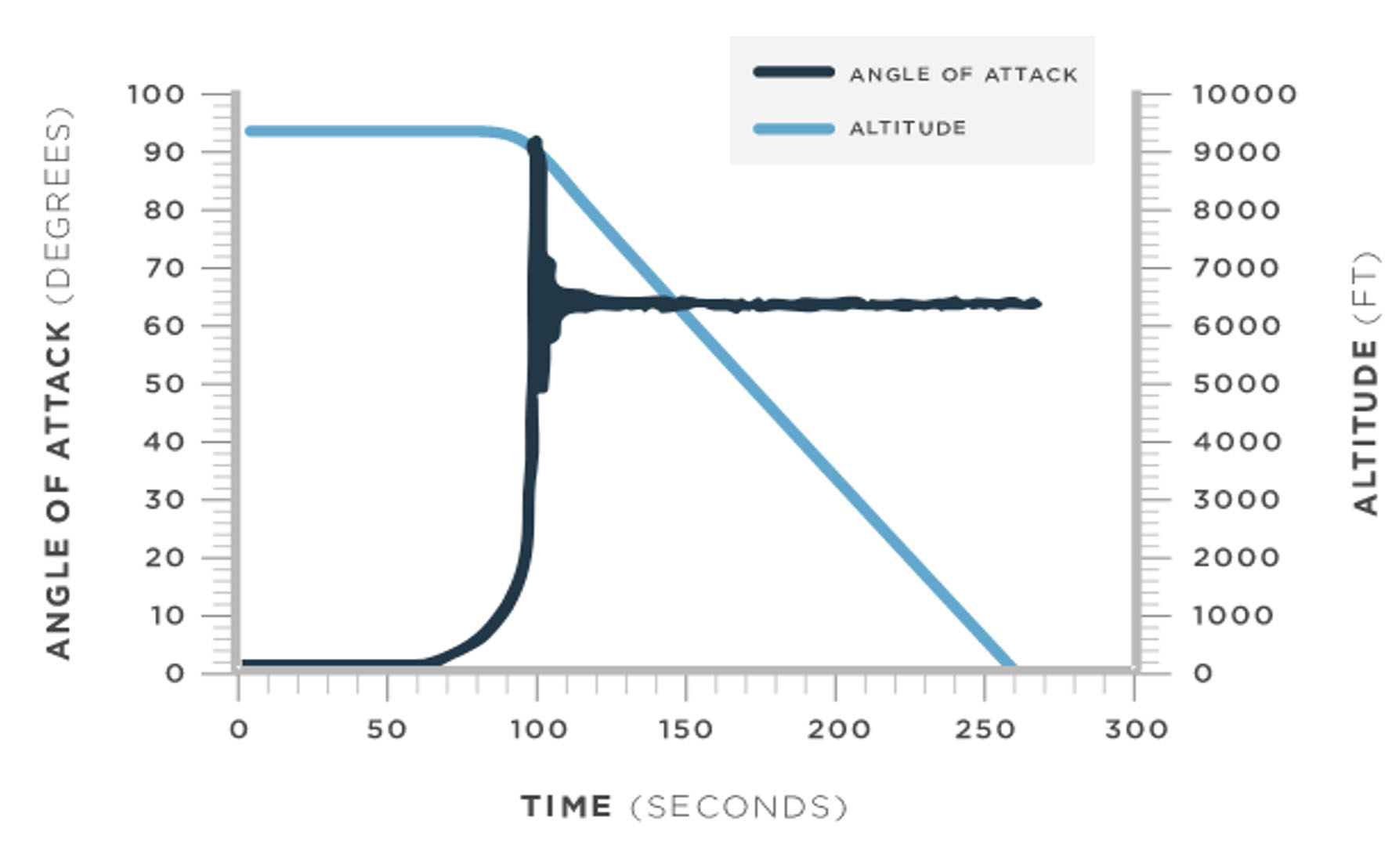 People fear stalls because they can lead to unrecoverable spins. Deep stalls are even more frightening. While working on the TTW LSA configuration, we researched deep stalls. The consensus is deep stalls are to be avoided. We could not find an instance where a deep stall was considered a safety maneuver.

Using the data seen in this article, we were granted US patent No 10,562,626: Tandem Wing Aircraft with Variable Lift and Enhanced Safety. The patent can be seen here.

We have presented data indicating the problem of LOC may have an aerodynamic solution, at least in a computer flight simulator regarded by many to accurately predict actual flight characteristics. The TTW LSA’s recovery from LOC can occur in zero visibility, does not require a functioning pitot-static system, and does not require a functioning electrical system. Although we do not have the means to test this configuration in the physical world, we are submitting this article in the hope the aviation community will put this idea to the test. Then, maybe, this killer can be tamed and brought to heel. Robert graduated from Chicago’s Rush Medical College and recently retired. His career included the practice of general surgery, trauma surgery, surgical critical care and wound care/hyperbaric medicine. His fascination with aviation stems from his father, who completed 44 missions as a navigator in the USAAF’s 8th Air Force during WWII. After the war he became a physician specializing in psychiatry and obtained his private pilot’s license. Robert got his private pilot certificate in 1976 but after accumulating 100 hours realized he did not have the time nor the finances to be proficient and safe so gave up flying. However, his aviation addiction proved incurable: he reads books and magazines, attends air shows, and flies X-Plane. He and his wife Anna and reside in Round Rock, Texas.

Flying in paradise: a vacation flight lesson in Maui