Today’s trip, from Chattanooga, Tennessee, to Greensboro, North Carolina, is perfect for general aviation. Instead of a six hour drive along the winding roads of the Appalachian Mountains, you can fly your Mooney there in less than 90 minutes. That’s assuming the weather cooperates, of course, and a quick look at ForeFlight suggests there might be some work involved. Your airplane is well-equipped with datalink weather and a good autopilot, and you are both instrument current and proficient, but is that enough today? Read the weather briefing below and decide what you would do.

The Maps page in ForeFlight shows your route cutting right across a cold front, with rain and IFR conditions throughout eastern Tennessee and western North Carolina. 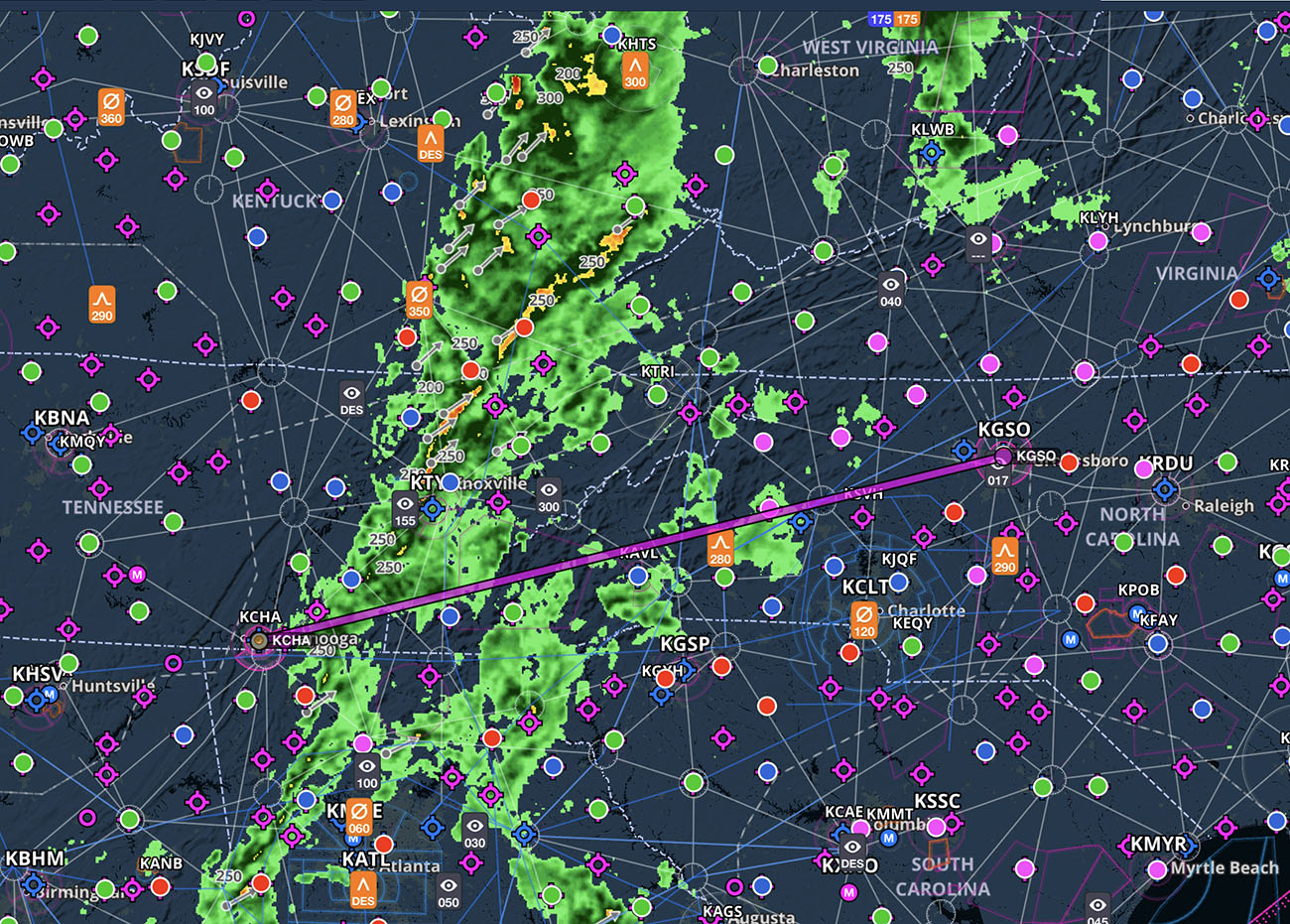 The surface analysis shows the cold front is bearing down on eastern Tennessee, while you’re currently in the warm front area ahead of it. It’s all spinning off a low pressure system over Illinois, and there’s another front just behind the first one. 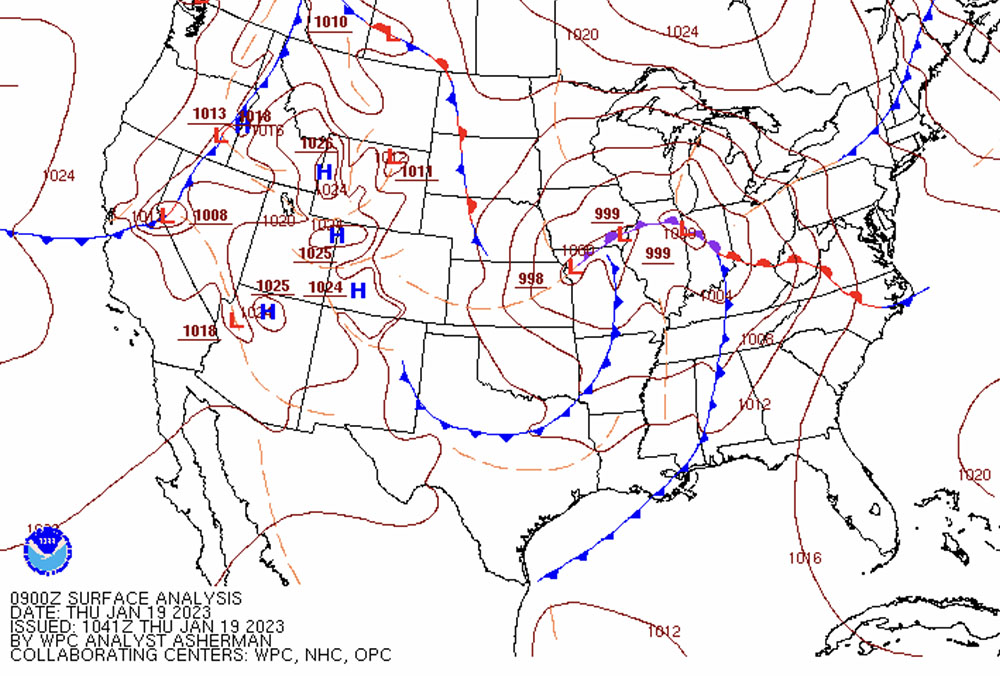 The 12-hour prog chart shows the front moving through Knoxville and Asheville this afternoon, although not much convection is forecast. 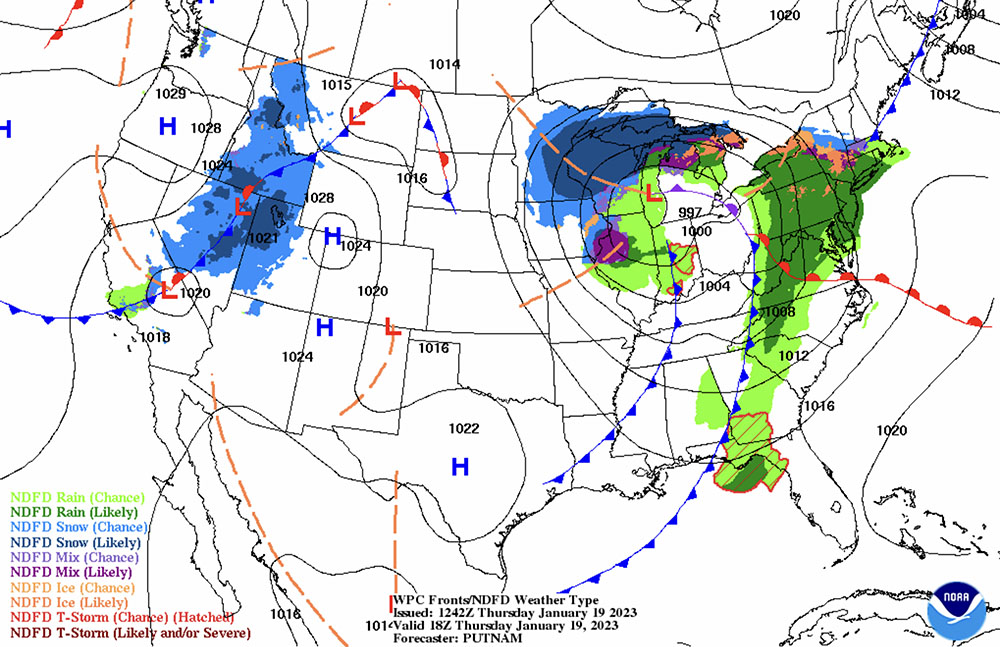 By tonight, the rain seems to be breaking up just a bit and the front should be right over your destination. 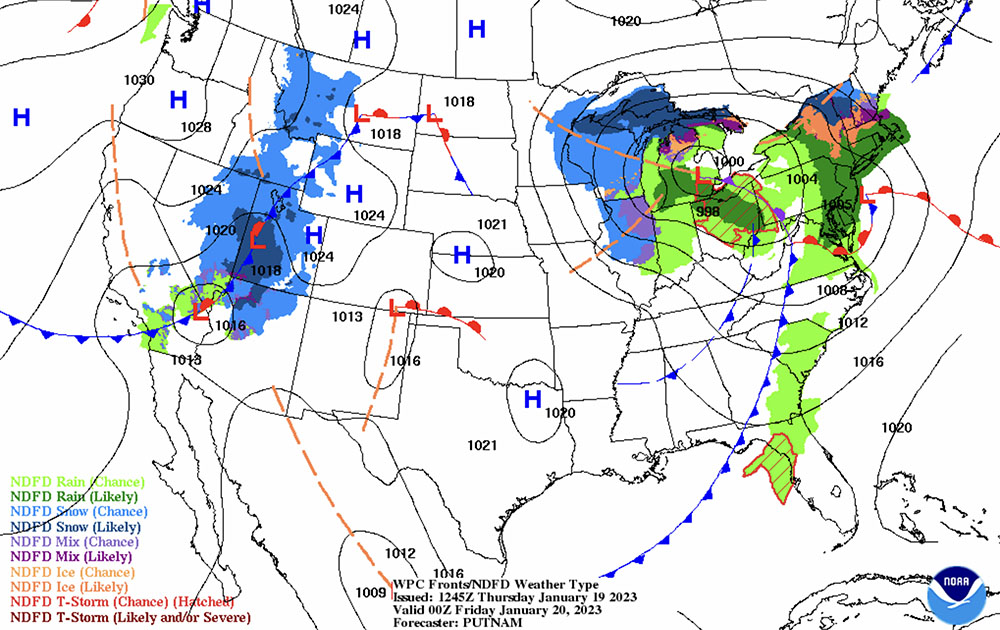 Given that big picture overview, it’s no surprise the radar shows a long line of rain stretching from northeast to southwest. So far it looks like just rain, but some areas north of your route could be convection or at least heavy rain. 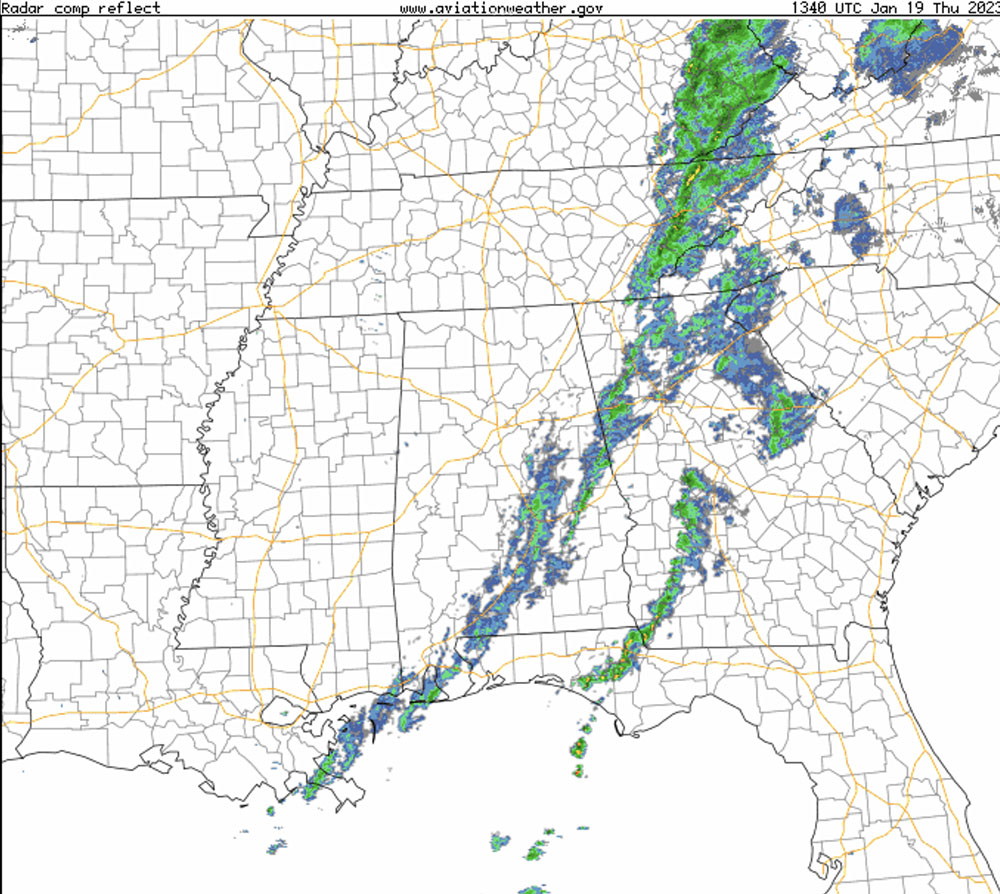 Infrared satellite shows a lot of thick clouds, but mostly far to the north of your route. Things appear less well organized in North Carolina. 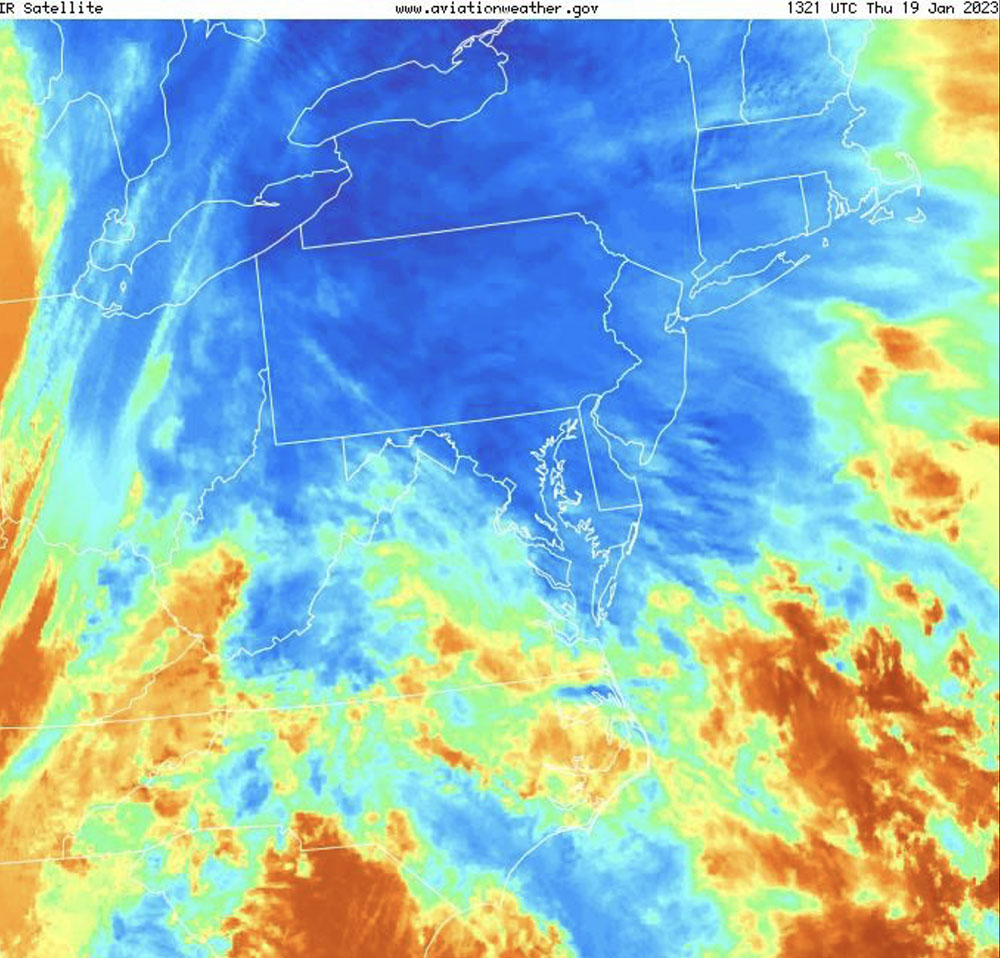 The graphical cloud forecast suggests ceilings ranging from about 800 feet to 1500 feet, with tops in the mid-teens. You’ll definitely be IMC for most of the flight today. 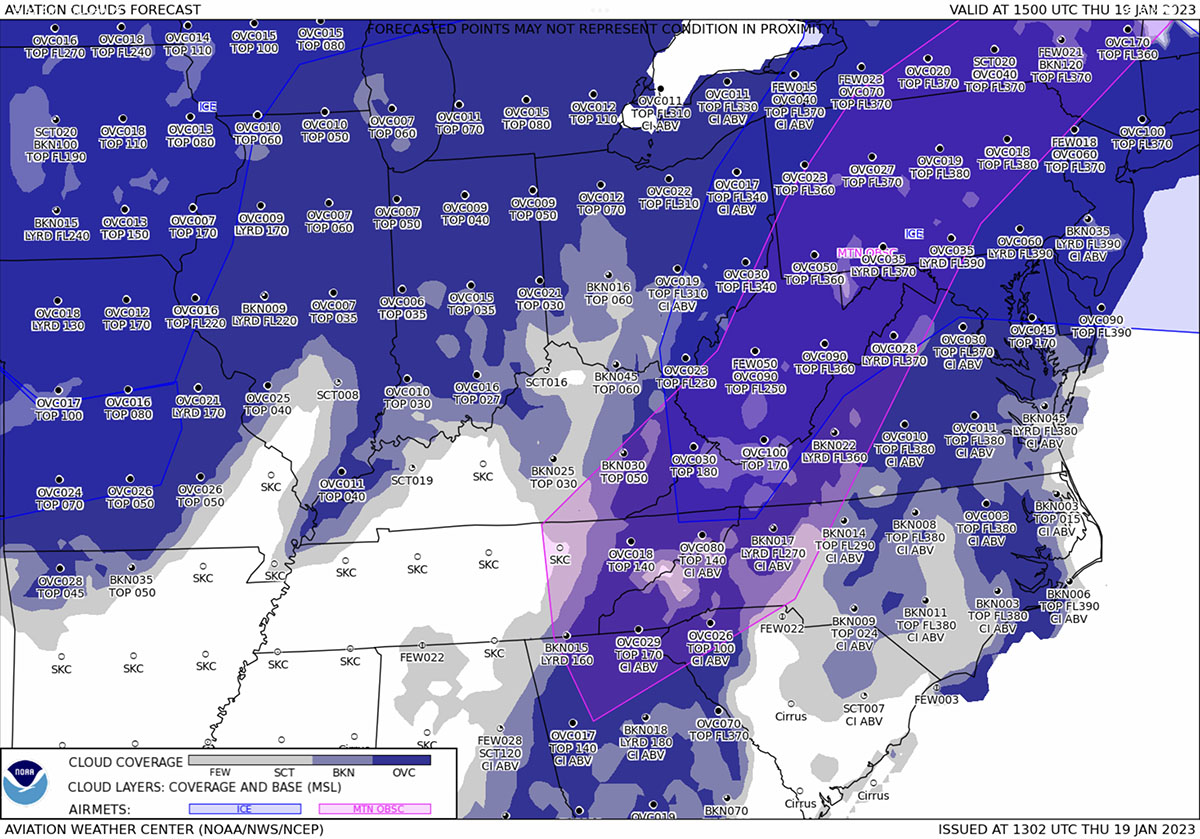 With a lot of mountains along your route, you know you’ll be flying reasonably high. That means icing could be a threat, but fortunately the freezing level is fairly high today—at least for now, as warm air is being pushed up from the south. You should be above freezing until at least 10,000 feet. 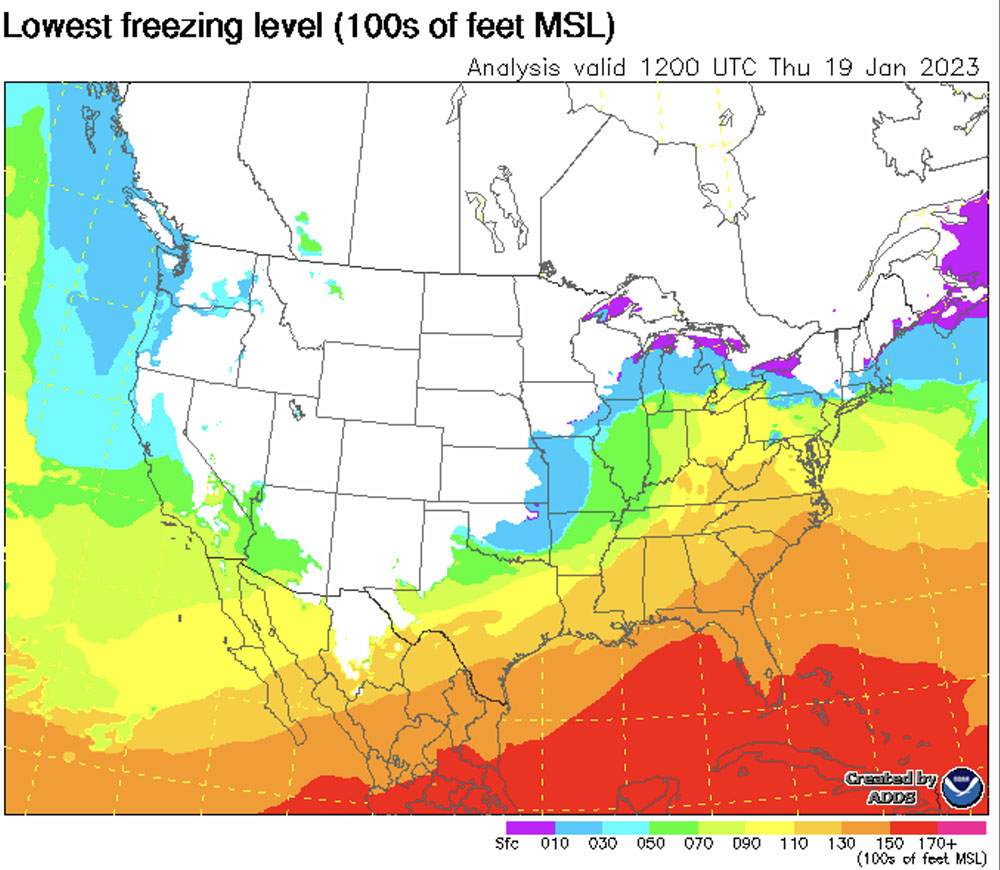 As expected, there is no ice forecast below about 11,000 feet along your route. 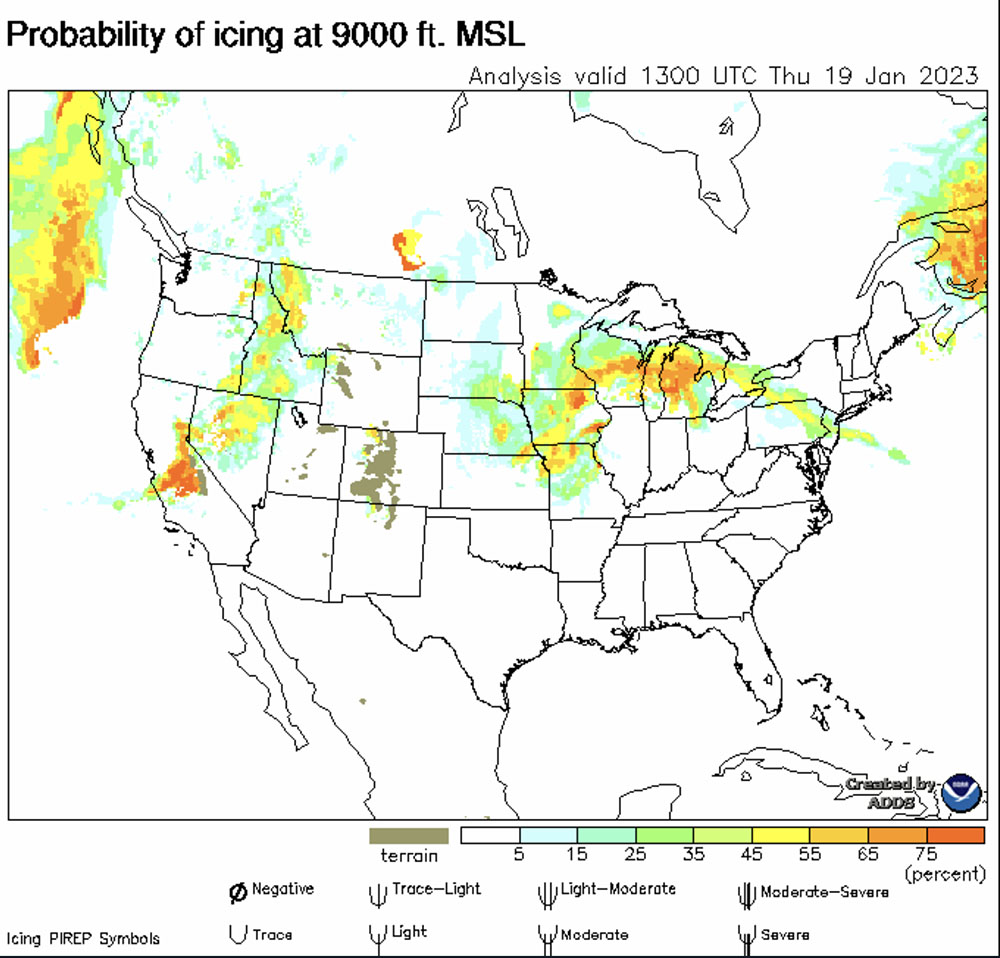 Turbulence may be a different story. There is an AIRMET for turbulence and low level wind shear, not surprising given the fast-moving cold front. 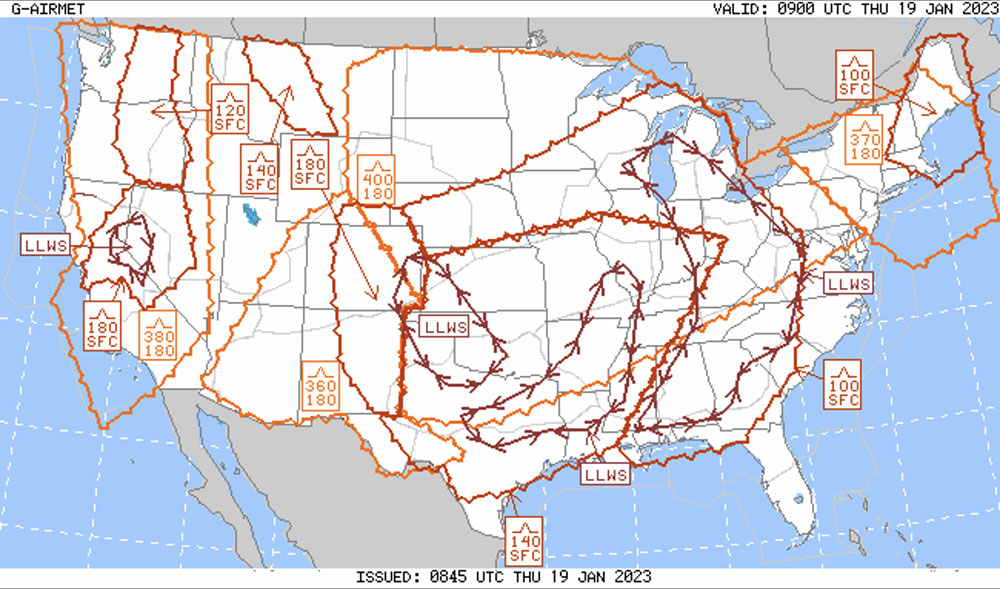 The GTG forecast isn’t terrible, but there definitely might be some bumps over the mountains with all that wind blowing. 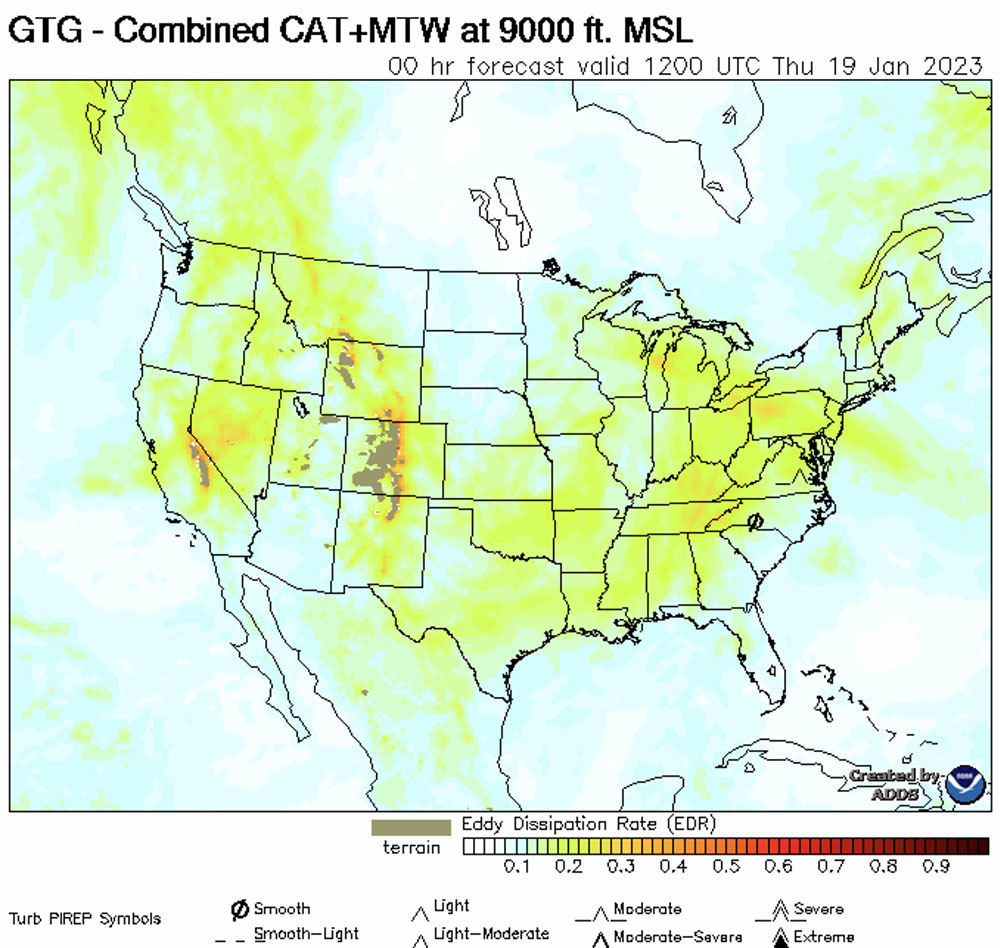 A quick look at the PIREPs overview chart suggests the rides may not be that bad. Most of the moderate turbulence is up in the flight levels. 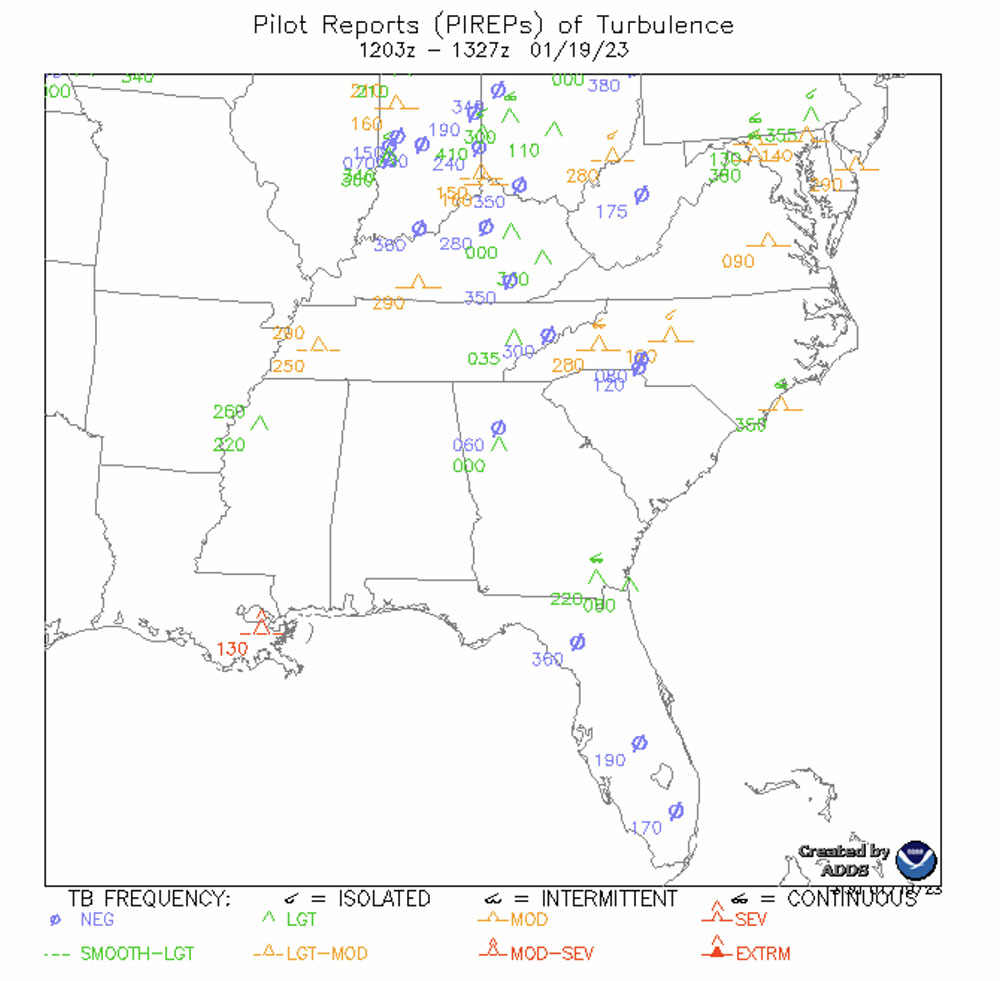 Digging into some specific PIREPs, the only relevant one for turbulence was light chop at 3500 feet near Knoxville, and that’s in the heaviest rain. 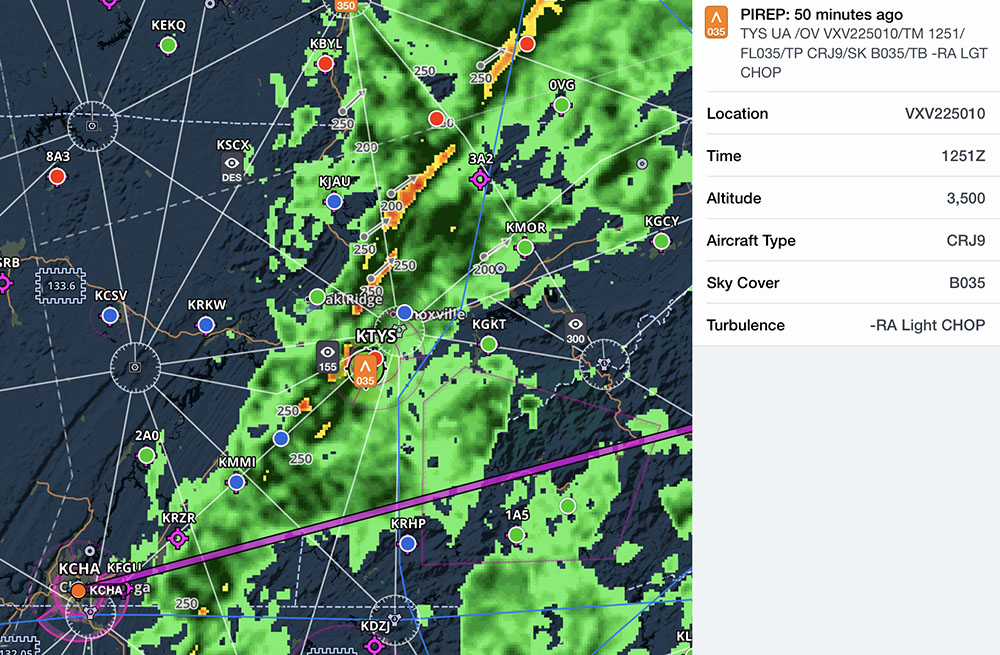 Another PIREP near Knoxville confirms the tops are in the teens—it’s unlikely you’ll get on top today. 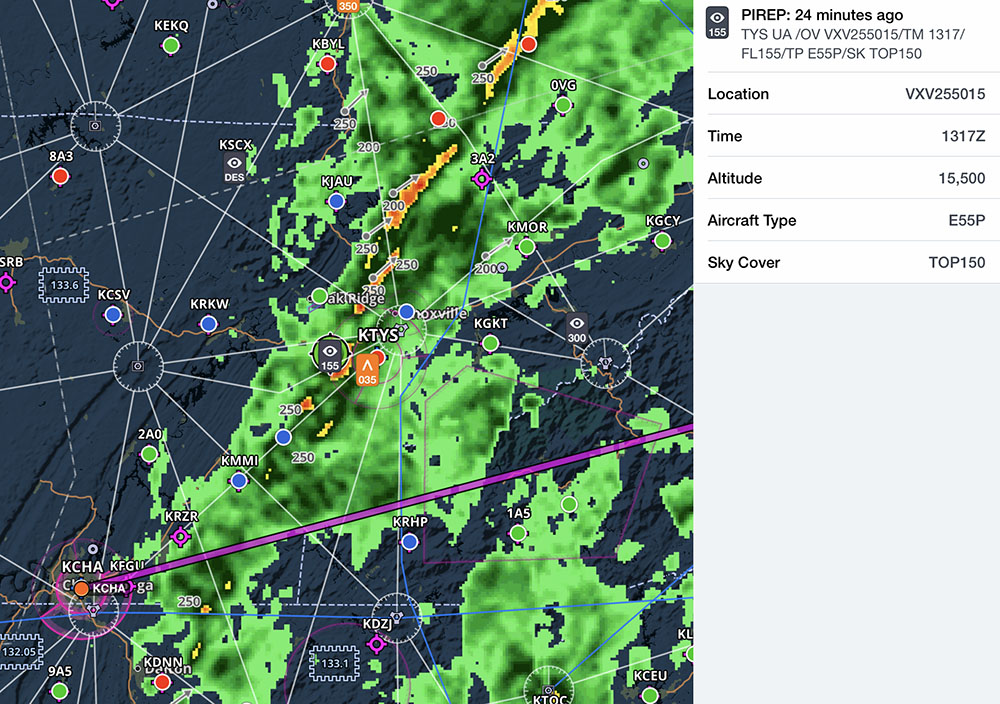 Further south, though, tops are reported at 7800 feet—maybe the reality along your route is somewhere in between? 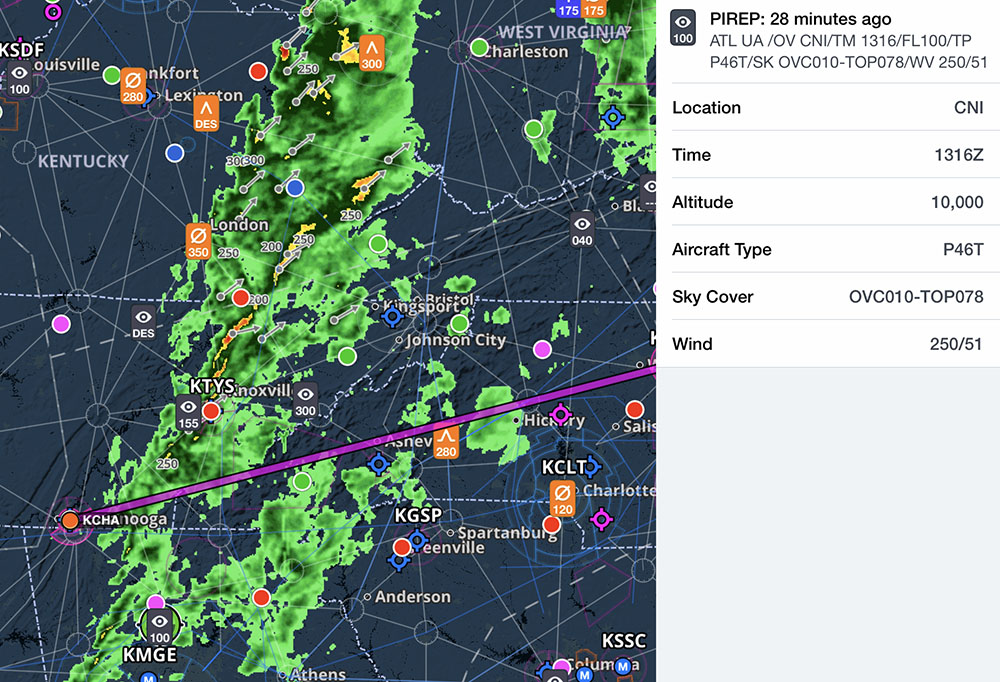 Closer to your destination, a pilot report confirms the 1400 overcast layer. 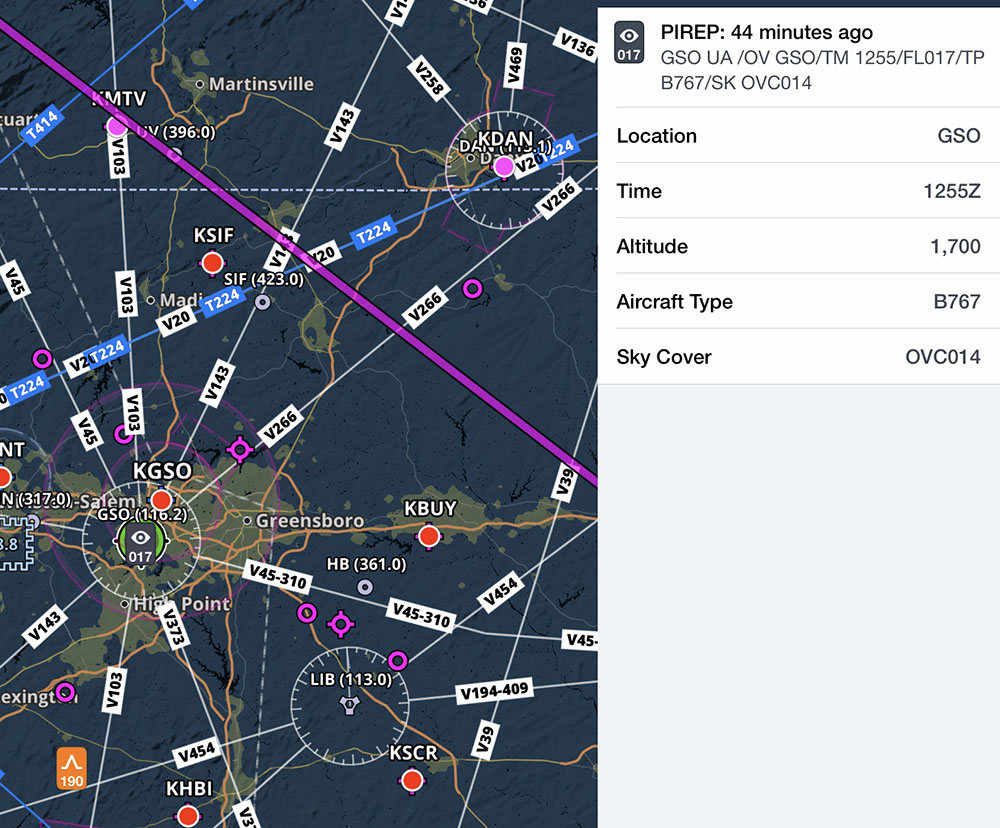 It’s an IFR day, so the METARs and TAFs are critical. Weather at your departure airport isn’t great, with a solid IFR ceiling and visibility. But it’s certainly above approach minimums and the forecast suggests improving weather over time. 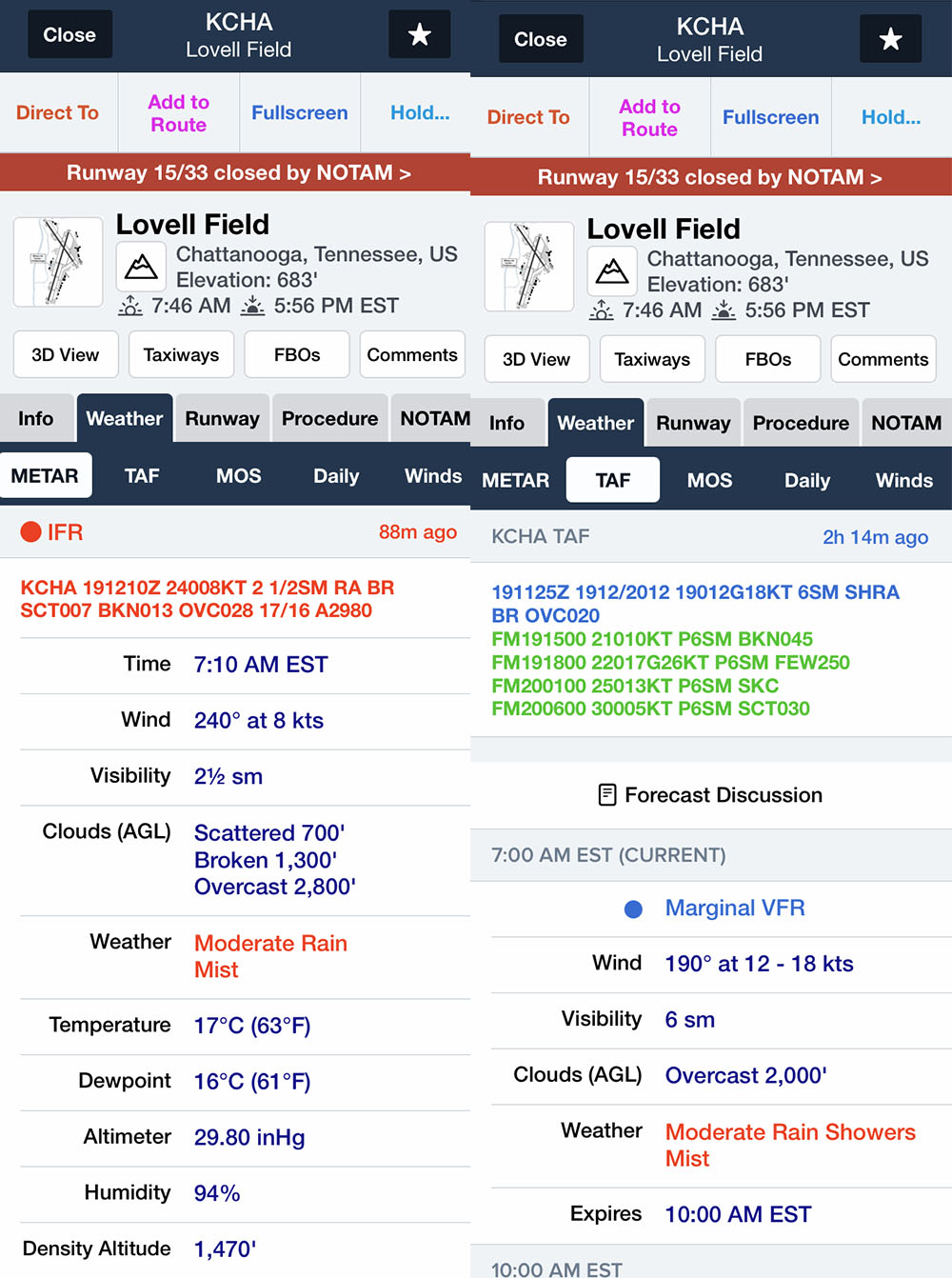 En route, conditions are IFR to marginal VFR but not that bad—visibility seems to be very good until you get well into North Carolina. 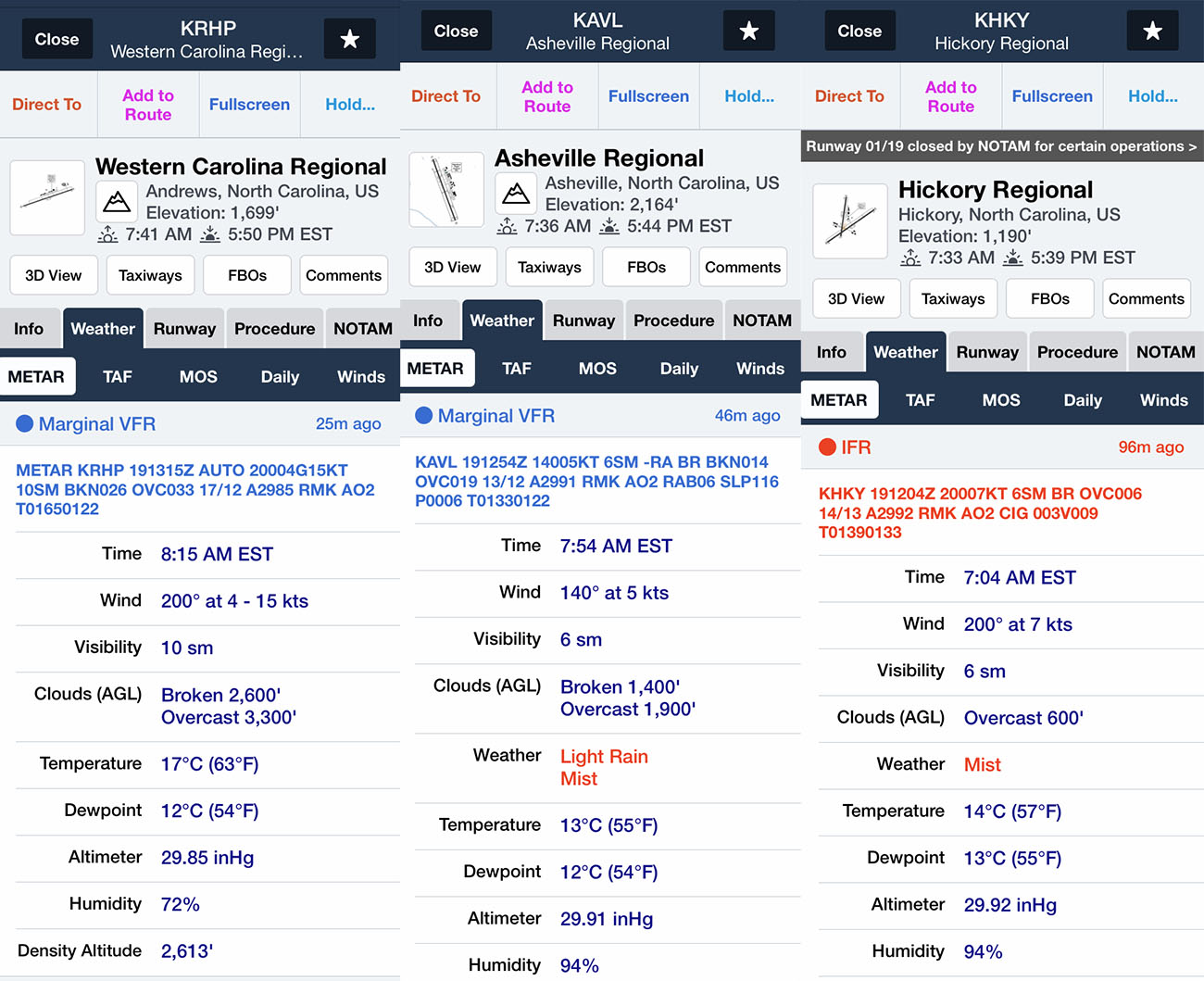 It’s lower at your destination, but once again above minimums and with light winds. The forecast at GSO, like it is at CHA, is for improving ceilings and visibilities. 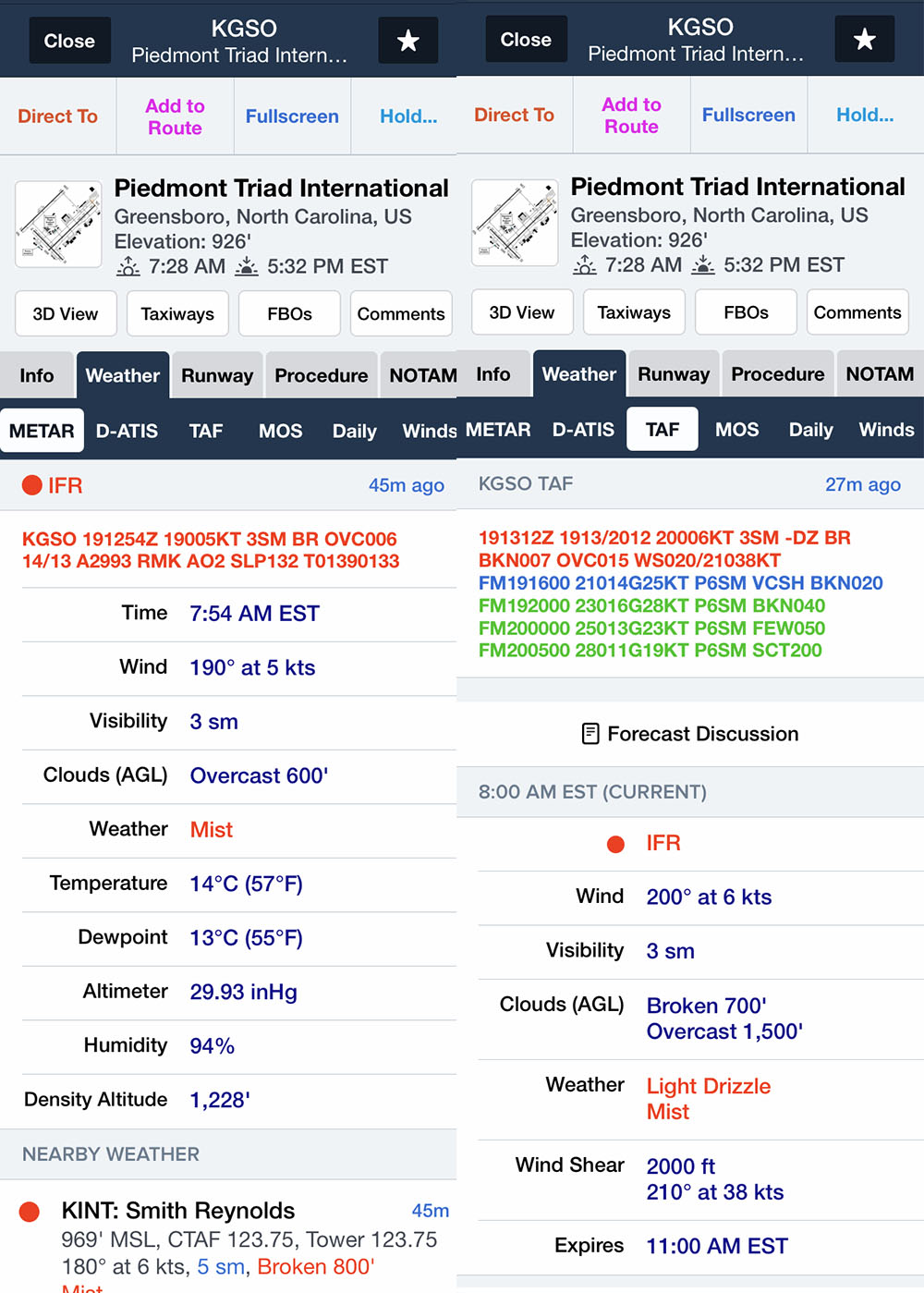 It’s time to make the call: is this flight a go or a no go? It will definitely be conducted in IMC if you go, and possibly with some bumps over the mountains. You’ll probably be on the gauges from shortly after takeoff until short final. But it doesn’t appear there is any convection or icing, and almost every airport along your route is above IFR approach minima.

What would you do? Add your comment (and explain your reasoning so others can learn) below.

An airplane that no longer wanted to fly