Blog - Latest News
You are here: Home1 / Article Archive2 / I was there3 / An airplane that no longer wanted to fly

This was scheduled to be a routine discovery flight in a Cessna 172, a simple cruise along the coast of the Monterey Bay to show a couple the addiction we call flying. Other than a low-level marine layer running from the ocean to the beginning of the coastline, the sky was clear and the visibility unlimited.

I formed our flight plan, which had us take off from the Monterey Airport and follow the boundary of the marine layer northbound, making sure to always keep sight of the ground below and to the east. Things were cheery in the cockpit as the boyfriend honed his new skills at the controls and the girlfriend joyfully took photos of him and the scenery. I remember thinking to myself “Man, I’m lucky to be in this job”.

After a demonstration of some basic air maneuvers, I decided that it was about time to head back. The last thing I wanted to do was climb to a higher altitude to give them a greater view of the surrounding areas for the trip home. I started the climb from 3,500 feet to the planned altitude of 5,500 feet. This is precisely where the 99% of “bored flying” turned into the 1% of “pure terror.”

The first thing I noticed was the engine RPM sounding a little too low for our conditions. I knew the aircraft was heavy, so I lowered the nose slightly to allow the airspeed to build and see if the engine RPM would return to normal. But nothing changed and I started to get a bad feeling. I leveled off at 3,800 feet to further diagnose the issue when I started to hear and feel them steadily roll back to zero.

I watched as the propeller became stationary and the engine seized to a halt. One glance to the oil pressure indicator showed the needle pegged at zero pressure. It was as if God was my CFI and had given me an impromptu power off landing scenario.

It took me a few seconds to comprehend the emergency that had just unraveled right before me. Internally, I was repeatedly screaming at myself that this was an emergency, and that I had work to do. Eventually, my neurons started firing again and I thought aviate, navigate, communicate and what I needed to do for each.

I immediately started pitching for a best glide of 65 knots and running through my memory items. In flight school, I was required to memorize every emergency checklist, which is a practice I carried over to my work as a CFI. I ran through all the items, paying extra attention to the ones pertaining to fuel and airflow, and attempted an engine restart. The engine cranked for a good 10 seconds to no avail. My heart sank as I realized I was probably going to have to attempt a forced landing.

After establishing with ATC that I had an emergency, I asked for vectors to the nearest airport which was 10 miles to my south. I quickly realized that at my altitude, it was well outside my gliding range and I began looking for suitable spots in front of me to land. I had the marine layer to my right, residential areas straight ahead, and a highway and hills to my left.

I started looking at the highway, but immediately noticed two things I didn’t like. It being a Saturday afternoon in August, there were cars piled up in a traffic jam for as far as I could see, as well as overpasses about every mile. I thought to myself, “is the highway isn’t an option, how about a larger commercial road” and began searching.

I looked at the ground in front of me and all I could see were small roads with medians, cars, houses, and a mall. I could almost feel the fire and pain from the crash that would likely ensue from an attempted landing on any of them. At this point, I had run through all possible landing spots I could see and didn’t like any of them. I was left in a battle with my own emotions. I felt genuinely trapped and out of moves to make. But I then remembered something that my CFI said to me that was a reminder I needed to fight until the bitter end. His quote to me was “as the PIC, it’s your sole responsibility to get the aircraft safely to the ground.”

That was the spark I needed to continue fighting, but the choice I made next was the single toughest one in my 22 years of living. I knew there was a beach to my right, but the reason I hadn’t considered it until now was I couldn’t see it because of the marine layer. And to make a bad situation worse, my vacuum system was long gone since the engine quit. The attitude indicator was tumbling along with the directional gyro. All of this meant it would be extremely tough to keep the airplane correctly oriented and not crash while flying through the marine layer. 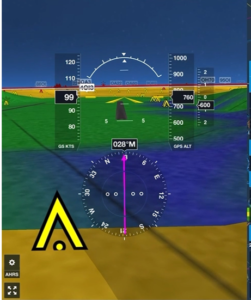 The backup AHRS guided me through the marine layer.

I thought to myself that there must be some sort of backup I can utilize to get me through, and I was right. My iPad that was mounted on the right seat window could be turned into a standby attitude indicator with altitude, airspeed and heading indications, all thanks to the Sentry Plus ADS-B unit I had with its internal AHRS (attitude and heading reference system) and backup GPS. I turned towards the beach, got the standby instruments displayed and started my precarious descent into the marine layer.

Even with these standby instruments, I knew I needed all the help I could get if I was going to pull this landing off. I told ATC I was now in the clouds and needed help with directional orientation to get to the beach. Luckily, they told me my current heading would take me out over the water, which meant I could intersect the beach. I made one final attempt to restart the engine, however, in doing this I inadvertently caused another problem. As if to rub salt in the wound, I watched both radios and GPS instantly shut off as the electrical system in the airplane completely died. All the cranking of the engine had drained the battery!

As much as I found it annoying, I also knew it didn’t matter when it came time to make the landing. This left me with a powerless (both in thrust and electronics) airplane quietly gliding through zero visibility murk, not knowing exactly how I’d end up on the other side. I knew that if I wanted to make the beach, I’d have to make a blind guess as to when to turn and line up with it, and so I did my best to do exactly that.

After what was the longest few minutes of my life, I finally broke out of the layer at about 400 feet AGL. But all I could see was open ocean and I thought I had misjudged the turn and would now have to ditch the airplane. Not a second later, I see the beach appear to my left and I quickly yank the yoke to get lined up with the shore. Through all these battles that made up this emergency, I finally felt like I had a win. I could now see where I wanted to land, but there was one last battle I had yet to fight – not hitting any beachgoers as I made my landing.

I like to think this is where I had a little help from above, as the stretch of beach I was already aimed for was cleared just enough for me to touchdown, rollout and come to a stop without hitting anyone. As my last act in being the PIC of the flight, I made sure my passengers were not injured at all and we stumbled out of the plane as people
rushed over to check on us. 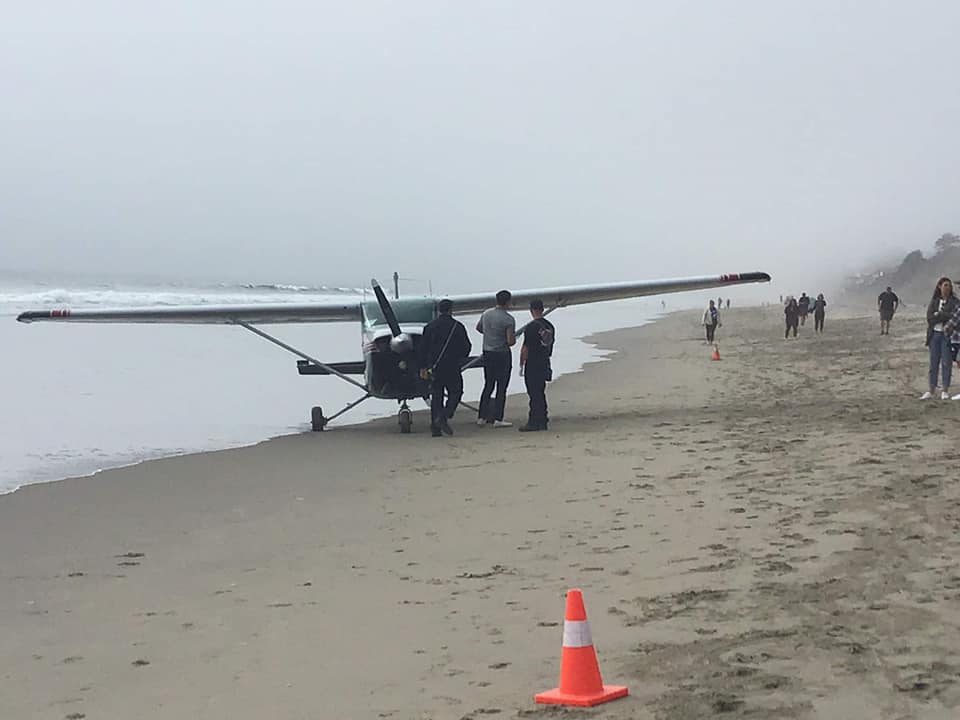 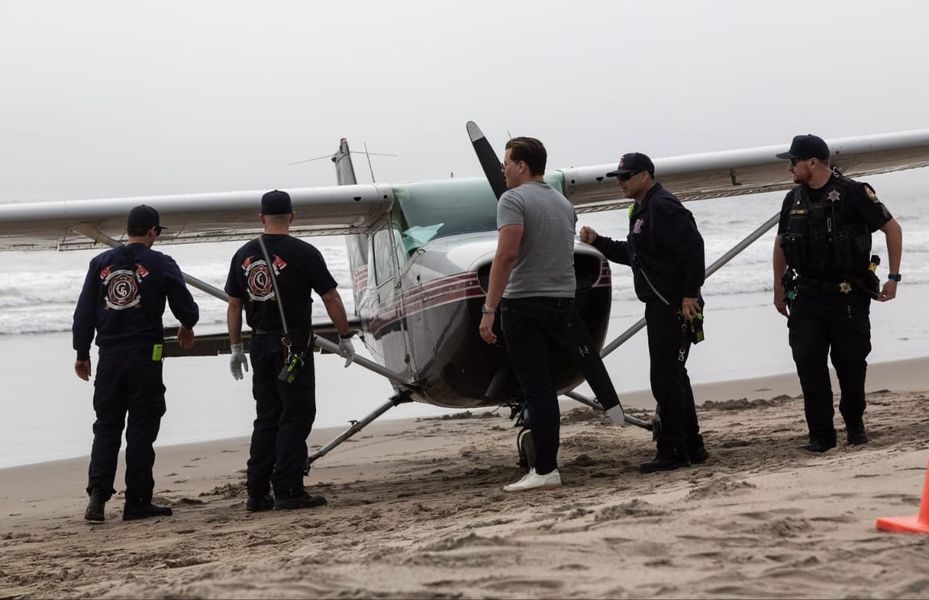 When I debriefed this incident, I realized there are a few important takeaways. The first being just how important it is to take emergency procedures training seriously. This one alone put me through my paces and demanded I draw on all my knowledge from flight training and experience as a CFI. The second is no matter how bad your situation gets, you need to fight until the bitter end. I don’t want to think about how this would have ended if I had allowed myself to continue to succumb to my emotions when things seemed impossible. The third and final, is to be mindful about exactly where you fly. You should always leave yourself a way out, and in my case, that would be a suitable place to land in an emergency that you can see. I now include that in my personal minimums when I do these flights.

All of this is to say, I’m incredibly thankful for the training I received and the instructors that passed me their invaluable wisdom. One piece of wisdom I can now pass along is that as a pilot, training to proficiency is paramount, because in situations like these where things go wrong, a pilot does not rise to the occasion, they fall to the level of their own training. 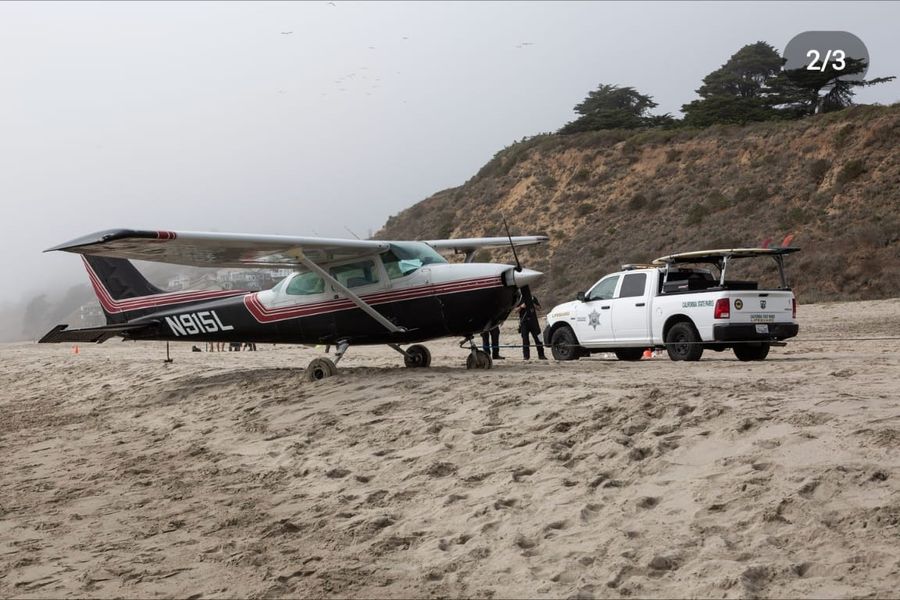 Matt Keane
Matt Keane is a Certified Flight Instructor based in Monterey, CA. He was born and raised just to the north in Santa Cruz and has perused an aviation profession since before he can remember. Having graduated from the University of North Dakota Aerospace program in 2021, he now works full time teaching students and giving aerial tours over the area he grew up in. Matt is currently on the airline track, building hours to become eligible for hire. In the future, he sees himself flying large airliners all across the globe while continuing to teach people the art of flight.

Go or no go: Appalachian IFR
Scroll to top