Blog - Latest News
You are here: Home1 / Article Archive2 / I was there3 / When means, motive, and opportunity come together

The idea of means, motive, and opportunity as necessary conditions is often thought about in legal contexts, but the fact is that pretty much any enterprise must have all three to succeed. How this relates to flying is my story. Some time ago I was overseeing a project to buy high performance computers for the Department of Defense. At the time these were super computers, but now my iPhone has more raw computing power. So it goes with computing technology, less so with civil aviation where much of the best new stuff is thanks to computers. I had to do site visits where the new computers were to go. This was mainly to make sure that the infrastructure would be in place in time. This is where the flying opportunity came in.

Many defense sites have locations that are not particularly convenient for travel. There were four sites to visit, each focused on a different kind of computing problem: aeronautic applications, estuarian research, meteorology, and various Army and Air Force applications. These were ERDC in Vicksburg, MS, Army Research Laboratory in Aberdeen, MD, Naval Meteorology and Oceanography Command in Stennis Space Center, MS, and Air Force Research Laboratory in Dayton, OH.

The locations made making one round robin trip too painful—there is no good way to fly between them commercially. Separate trips would have taken a lot of time. This is where the flying motive came in. I proposed a noble but not entirely selfless solution: I would fly myself directly between the sites, saving on total elapsed time from the office. And a bonus: save on travel costs. The other not specifically mentioned bonus: exercise the privileges of my pilot’s license. The Maryland visit was by car, just 90 minutes away. I couldn’t justify flying there, but the rest made some sense. The trip was planned for mid-July, when there would likely be lots of fluffy cloud cover and potential instrument conditions—a chance to use my IFR skills. In any event, I would certainly file IFR for safety, real IFR or not. 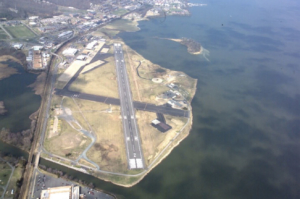 The only detail left to arrange was the means. Fortunately, I was a member of the Quantico Marine Corps Flying Club. The club had many Cessna singles and single and multiengine Pipers, so taking an aircraft away for a week was feasible without hurting other members. A bit of luck was that a 172 was just coming off the first couple of hours after an engine change, so wasn’t scheduled yet. The mechanics agreed that my flight was going to be a great next step in the break-in period—much better than a lot of touch and goes locally, plus more guaranteed hours than usual for a week. The trip itinerary was Quantico (NYG), to Dayton, Ohio (DAY), leaving Sunday afternoon for meetings Monday for most of the day, and then to Bowling Green (BWG) to overnight. Next was Vicksburg, Mississippi (JAN), then to Gulfport to visit Stennis Space Flight Center in Bay Saint Louis, Mississippi.

There are a few other means-type things that may be of interest, nostalgic for old pilots, and perhaps of historical interest to younger ones. I had a yoke-mounted GPS with a magnificent 2” x 1.5” black and white screen. I also had a fat envelope with paper VFR and IFR charts. This was before iPads, but the GPS had an IFR route and approach database that was to be much appreciated. Weather briefings were computer-based, sort of, using a service called DUATS, now discontinued and probably not very much missed by anyone. One final nostalgic thing: one of my stops, Bowling Green, Kentucky (BWG), had an honest-to-God flight service station on site. You could walk right up to a counter, speak to an actual briefer face to face, ask questions, and file a flight plan. They often provided some local lore and advice too.

The first leg involved flying over the Appalachians, little worn down nubs of a great ancient mountain range. Not much by Rocky Mountain standards but still involving being at the right altitudes and planning how I might have to deal with squirrely winds and clouds. Those with “real” mountain flying experience will be chuckling about the mountains in Virginia and West Virginia, but I can personally attest to some magnificent rotor clouds and lenticulars off those mountains when the winds are strong from the west. I found this leg fun since most of my previous flying was up and down the East Coast, from North Carolina to Maine, and some in the Southwest. Think mostly flat. This initial leg began mid-afternoon on the Sunday before my first meeting in Dayton. No time pressure, and the light to sometimes moderate turbulence added to the “great adventure” feeling in beginning this trip.

The visit ended on time, so I was able to leave Dayton in late afternoon haze and clouds. The next stop was Vicksburg, more than six hours away in a pokey 172. My plan was to overnight in Bowling Green and the next morning to continue to Vicksburg for afternoon meetings and an overnight. There were a lot of strong thermals, not too surprising for Ohio in summer. Glider pilots love these—they ride the thermals up. Light aircraft pilots enjoy them less, the issue being maintaining assigned altitude. One minute I would be getting a big boost skyward that required a dive to stay at my assigned altitude; a few minutes later I might be climbing to maintain my assigned altitude.

I asked ATC for some altitude changes, hoping for steadier air. Finding none, I asked for cruise clearance to get more altitude flexibility. Dancing with the clouds was fun for a while, but I also enjoyed leaving the thermals behind. Bowling Green has a nice little airport near town. I stayed in a nearby motel, taking advantage of a thing called “crew rate” per the FBO, and free drop-off in the crew car. (“Crew rate” and “crew car” have happily stood the test of time, unlike walk-in briefings.)

The leg to Vicksburg was interesting in a different way. I got my genuine in-person WX brief, filed IFR, and was VFR on top for most of the trip, descending through the clouds only to land. This is the way a lot of movies visualized heaven—cruising along in bright sunshine, blue sky above, and a layer of fluffy clouds below. This can be a serene experience, but unfortunately you can’t see any scenery, which is one of the key benefits of personal flying. (I sit by the window in commercial flights too.) I also enjoy night flying on a clear dark night, silently floating—noise cancelling headphones on—above a beautiful pattern of lights on the ground in slow motion. I didn’t get to do that too much, and probably for the best from a safety standpoint. 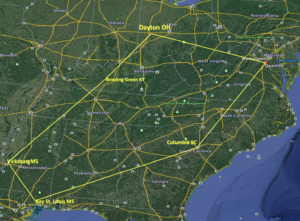 Try doing that on the airlines.

The trip from Vicksburg to Gulfport was the shortest leg of the trip, mostly in murky marginal visibility. Why didn’t I fly into Stennis International (HAS), right down the road from NASA Stennis you may ask? This had an 8,500-foot-long runway, but not much in the way of services available. I needed a place with hangar space since thunderstorms were predicted overnight. Having rental cars and nearby hotels was important too. I can only assume that the “International” part of Stennis International was aspirational, although there were probably official foreign flights for the space program there, but even today you would have a hard time getting there with a direct flight.

All visits done, it was time to go home. The plan was to overnight in Columbus, GA (CSG), on the way back. The flight there was in low visibility with thunderstorms possible, but none appeared. I again took a crew rate motel and crew car drop-off and pickup. The final leg home was fun, with IFR only for the first hour and the rest in nice weather. I admit to a bit of unnecessary showing off on the final landing: I treated myself to a PAR approach. I rationalized that I was giving the controller some practice too.

The trip crossed ten states. I flew a total of 20.9 hours, averaging 3.5 hours a day, about half of which was actual IFR, each leg memorable in its own way. Visibility was marginal VFR in haze when I wasn’t in actual IFR or among clouds, except for the final leg. Such is summer in the South. At the time I considered these as features rather than problems. The biggest takeaway for those who would like to be able to take such trips is that an instrument rating is pretty much essential—at least in the summer in the South.

Recently I talked to some visitors at the Valiant Air Command, where I guide. There was an older and younger man from Germany. They had just completed a flying trip around the US, like my trip but with many more stopovers and no schedule. Naturally, we traded flying stories. They told me that they do this every few years. They love flying and in the US rentals, fuel, and government costs are reasonable (for them). This of course compared to flying in Europe, where every flight is an ATC event with fees for everything. Moreover, in a 172 you can’t fly very long without crossing into another country. More fees. A nice reminder that a trip such as mine is feasible and even arguably relatively inexpensive compared to elsewhere. Count your blessings. Randall Shumaker
Randy soloed at 17, earned his private license at 18, with new ratings over the years as time, opportunity, and finances allowed, adding first Instrument then Commercial and multi-engine. He enjoyed flying for both business and pleasure including some exciting cross-country adventures. His early engineering career involved test and evaluation of the gear needed for operating aircraft from ships. Since retirement he serves as a docent in a warbird museum where many of the Navy aircraft types that he worked with are now primarily of historical interest. He still looks up whenever he hears an airplane overhead.

Another tale from the doc side
Scroll to top