Blog - Latest News
You are here: Home1 / Article Archive2 / I was there3 / Another tale from the doc side

Steve Mosier told us “Tales from the Doc Side” earlier this year. This is about my favorite flight surgeon. Her name was Karen and she graduated from the Air Force Academy in 1980, the first class to include women. She was an outstanding student and All-American swimmer for the Falcons; after graduating from the Academy and then Baylor College of Medicine, Karen became a flight surgeon.

Shortly after I arrived at Kunsan Air Base (KUV) in South Korea, Karen arrived on her first assignment as a flight surgeon. We were in the 8th Fighter Wing, the “Wolfpack,” and Karen became the flight surgeon for the 80th Fighter Squadron, named the “Headhunters” from their P-38 exploits during WWII. With the Latin motto, Audentes Fortuna Juvat (“Fortune Favors the Bold”), they were also called the Juvats– remember that name. As Chief of Wing Plans, I flew with the Juvats.

Karen hit it off with everybody; she was bright, pretty, an excellent flight doc, and most importantly, she could hold her own with a bunch of F-16 pilots. She kept us flying and flew with us often to observe how we dealt with the stresses of flying a high-performance fighter.

She also became a part of the Juvats’ daily life and our squadron parties when we assigned callsigns to our new members. Based on her last name (O’Hair), Karen got the callsign of Scarlett– i.e., Rhett “Frankly my dear…” Butler in Gone with the Wind.

When flying with us, there were no restrictions on the flights in which she participated. One day, she was scheduled in the back seat of my F-16B. We were #4 in a four-ship headed to the Koon-Ni air-to-ground gunnery range about 25 northwest of Osan AB. 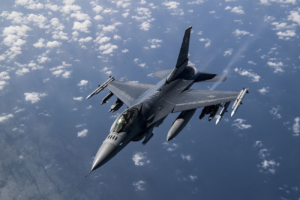 The best flight surgeons are active participants, even if that means cranking and banking in an F-16.

After the flight briefing, I told Scarlett she would be an active member of the flight, not just a passenger. I wanted her to keep an eye out for other aircraft and to let me know where they were, e.g., “Boots, we’ve got a bogey at our 8 o’clock high for two miles!” (“Bandits” are known bad guys, “bogeys” are unidentified.)

I also told her she was going to make all our radio transmissions while on the range. Since there were no female pilots at the time, the range control officer would be wondering about her voice coming from F-16 #4. Once on the range, Scarlett made every radio call for me; she didn’t miss a beat.

As Memorial Day approached, the commander of the 80th Fighter Squadron, callsign Conan, tasked me to build a “carrier” so we could conduct “carrier landings” during a squadron cookout. I wasn’t building an ocean-going vessel, just a vinyl-covered, wooden platform on which we could do our version of carrier landings.

Those landings consisted of running full-tilt and diving headfirst onto a soap-slicked “deck.” Landing on your chest/stomach, you slid along the deck and, approaching the end, you brought your feet up as a “hook” to engage the “barrier,” an old fire hose held by at least two others waiting their turn.

Using a garden hose, a Landing Signal Officer (LSO) randomly sprayed approaching pilots in the face. That’s a wave off (i.e., “Don’t land!”), which was usually ignored and resulted in a bolter. As you can imagine, all participants were soapy, muddy, and beer-soaked.

To build a carrier, I needed wood, vinyl material, and padding for the approach end of the deck. Fortunately, my job gave me contacts across the base plus one of our lieutenants was dating another lieutenant who supervised the ammo dump; she scrounged some scrap lumber giving me the 4x4s for the keel and two 4×8 sheets of plywood for the deck. With foam rubber and vinyl scraps from the life-support shop, the “carrier” was soon ready.

A thing of beauty, she was sixteen feet bow-to-stern, had a four-foot beam and a two-foot-high deck. However, I couldn’t find an old fire hose for the barrier. We had garden hoses available, but they cause major bruising on the back of your calves.

The day of the cookout, the Juvats were participating in a softball tournament when I spotted a 30-foot fire hose. It was attached to a hydrant used to water the ballfield and I reasoned they wouldn’t be watering that day. I grabbed the squadron operations officer and we quickly hatched a plan. He got the keys to Conan’s pickup while I nonchalantly unhooked the hose; when he drove up, I threw the hose in the back and we were off. The carrier was mission ready!

When the tournament ended, the Juvats headed to our cookout. We were grilling burgers and hot dogs, and the beer was flowing. As everyone fueled up, Conan addressed me saying, “Boots, as the architect and prime contractor building the USS Juvat, you are hereby directed to make the first landing!”

I made sure the deck was soaped up, asked the LSO to wet me down, and then took a running dive onto the deck. I rounded out a bit high and dropped in, but I slid to the end and caught the barrier, so I didn’t get a mud bath. The crowd cheered, but I felt like someone had landed an uppercut on my chin.

Everyone yelled, “Do another!” So I did.

I greased the second landing, but as I got up, someone asked, “Are you OK?”

He said, “Look at your shirt!”

I looked down and noticed a large, blossoming bloodstain on my chest; I had split my chin on that first landing. Scarlett was there enjoying the proceedings, but she immediately grabbed me and ordered, “Come with me!” 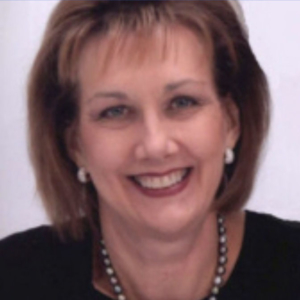 A great doc, taken too soon.

Lieutenant Colonel Boots followed Captain Scarlett’s orders and we marched off to the nearby clinic, where she supervised the medics cleaning and then closing my wound with five stitches. As we left the clinic to rejoin the party, we encountered another pilot sporting a similarly blood-stained shirt. Scarlett took him inside, turned him over to the medics, and quickly rejoined me to head back to the party.

When we arrived, Captain Scarlett told Lieutenant Colonel Conan, in no uncertain terms, “If there’s another accident, the USS Juvat goes into dry dock!” The other pilot and I were the day’s only casualties; we became “The Chin Brothers.”

About the purloined fire hose. Mid-afternoon, two enlisted Security Police (SPs – Air Force cops) arrived. As they got out of their truck, the Wing Commander, a colonel, approached them asking why they were there. They replied, “We’re here to retrieve the hose.”

The colonel asked, “What hose?” The SPs looked at each other and one pointed. Without looking around, the colonel stated, “They’ll return it when they’re done.”

Upon returning from Korea, I was stationed at MacDill AFB (MCF) as an F-16 instructor pilot (IP), flying with the 61st Top Dawgs. Scarlett arrived at MacDill shortly after I did; she was newly married to another Juvat who was also an IP in the 61st. Her last name was now Fox, so we immediately gave her a new callsign, Fox-II. This was fitting as fighter pilots transmit “Fox-II” when shooting heat-seeking AIM-9 missiles at enemy aircraft.

I assumed command of the 61st in December of 1987 and was elated to have Fox-II as the Top Dawgs’ flight surgeon, especially when my seven-year-old daughter fell and broke her arm while skating. Fox-II took good care of her, soothing her as she got a numbing shot, the bone set, and her arm put in a cast.

Upon retiring, I thought I would never encounter Karen/Scarlett/Fox-II again; I was mistaken.

While living in Colorado Springs, my wife and I sponsored cadets at the Air Force Academy. Sponsors provide cadets a home away from home, giving them a break from the rigors of training, the chance to catch some sleep (boy, could they sleep!), and feeding them some home cooking (and boy, could they eat!). One of the cadets we sponsored, Scott, became like a son to us and we remain in touch with him to this day.

Unfortunately, prior to graduating in 2007, a problem with Scott’s eyes was discovered and he faced being disqualified from entering pilot training. Fortunately, the Air Force cleared him for surgery to possibly correct the problem, and sent him to Wilford Hall—the Air Force’s flagship medical facility—in San Antonio, TX.

Following his surgery, Scott returned to the Academy and told me the attending flight surgeon at Wilford Hall would make the final decision on him entering pilot training. He added that her name was Colonel Fox.

I immediately called Karen/Scarlett/Fox-II to tell her about our relationship with Scott and she said, “Boots, I’ll give Scott every consideration, but I have to do what’s right for the Air Force.”

I replied, “I’m not asking for special treatment for him.”

Reading me, she asked, “Do you want to be the one to break the news to Scott, regardless of my decision?”

I answered, “Exactly! And I appreciate you giving me that opportunity.”

Several weeks later, she called to break the news: “The test results are back and Scott is cleared to enter pilot training!” I thanked her on behalf of all pilots who had overcome barriers to their dreams. I then called Scott with the good news.

Sadly, following a courageous and inspirational four-year battle with pancreatic cancer, Karen/Scarlett/ Fox-II passed away in 2012; she was 56. I last spoke with her on the phone shortly before she died; she assured me she was in good spirits and at peace.

When we hung up, I wept.

When means, motive, and opportunity come together