Blog - Latest News
You are here: Home1 / Article Archive2 / John's blog3 / A safe pilot is a humble pilot—lessons from the Cirrus community

After a recent weekend immersed in the world of Cirrus airplanes, I have a renewed appreciation for the French maxim plus ça change, plus c’est la même chose. No matter how you slice the data, and no matter what airplane you fly, the most important driver of aviation safety continues to be the person in the left seat. Even with all the latest technology—in fact, maybe especially with all the latest technology—there’s no substitute for a humble pilot.

My weekend in Cirrus world was an absolute blast. While I have logged a couple hundred hours in SR22s over the last five years, it’s definitely not my daily driver. But after flying 1100 miles in one and attending the Cirrus Owners and Pilots Association (COPA) annual convention, I wish it were. It’s an impressive airplane supported by a passionate community, one that has gotten quite good at having tough conversations about safety. The results are encouraging: the overall accident record has improved significantly since a peak in 2011, to the point where it would be boring if not for the personal tragedy involved. 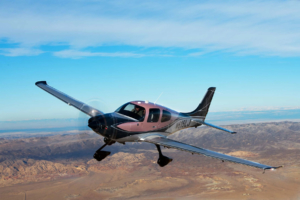 That shouldn’t surprise us. Cut through all the technology, all the buzzwords, and all the jokes from non-Cirrus pilots, and you are left with one unavoidable fact: the Cirrus SR22 is just an airplane. It is a fixed gear, single engine, four-seat, unpressurized airplane powered by a Continental engine and loaded with Garmin avionics. Sure, there’s the parachute—more on that in a bit—but far too many people overcomplicate this discussion. The similarities between an SR22 and a Cessna 182, for example, vastly outweigh the differences.

What does cause crashes are the same things that any pilot will recognize from countless NTSB reports: landing mishaps due to unstabilized approaches or poor crosswind technique; VFR into IMC or other weather accidents; poor IFR technique leading to loss of control; and engine failures, often due to poor maintenance. None of these are unique to the Cirrus, and almost all of them relate to the pilot. Hence COPA’s focus on training and technique.

Of course there is one part  of the accident record that is unique to the Cirrus—many crashes resulted in no fatalities, thanks to the Cirrus Airframe Parachute System (CAPS). In fact, just about every CAPS pull that has happened above 1000 feet has been successful, meaning no fatalities and in most cases not even any serious injuries. In an emergency, it is much more foolproof than the average pilot.

But I’m not interested in reopening the debate about the parachute. You can find that discussion here, here, or here. The key point at the convention was that using CAPS is not easy for most pilots. COPA safety guru Rick Beach played the ATC recording of an SR22 pilot who lost engine power at altitude, but got tunnel vision and tried to glide to a faraway airport. He realized too late that he could not reach it, was too low to pull the parachute, and ended up in a field.

Beach shared other examples of pilots who briefed that they would use CAPS and trained for the use of CAPS, but still pulled the handle too low or not at all. These were believers in the parachute who still couldn’t bring themselves to use it when they needed to. The chart below (courtesy of Beach) shows how tragic this mistake is: over 150 lives could have been saved. 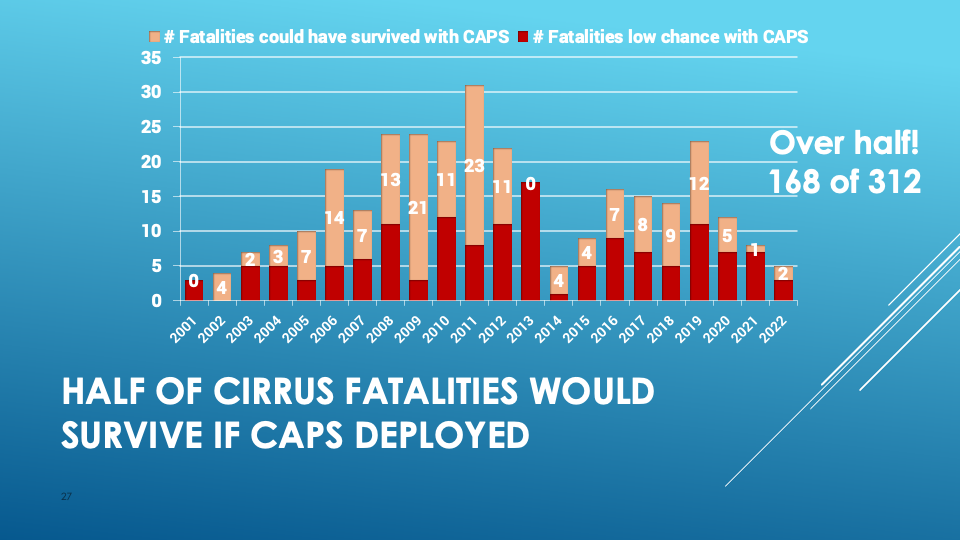 Task saturation may be part of the problem in these examples, but I think pilot mindset plays a big role too. Just like deciding to go around or cancel a flight in marginal weather, it takes humility to pull the handle. Consider two scenarios:

The result for the airplane is identical in both cases—serious damage—but the blame feels different. In the first one, you did your best and things just didn’t work out; in the second one, you directly caused the damage. In hindsight, it’s obvious that scenario two is the better option, since your chances of avoiding death or serious injury are much better, but in the moment it’s a very hard decision to make. As soon as you pull the handle, you’ve eliminated any chance of a miracle ending. It’s sort of an aviation version of the trolley problem.

Flying with more humility is easier said than done. Committing to regular, type-specific training is helpful, but only if you’re willing to admit it when your performance is sub-par. Using some type of standard operating procedures can also help, even if it’s just a few rules of thumb. Instead of trying to make a snap decision in case of engine failure, for example, it’s helpful to know that “passing through 2000 feet AGL, I will pull the CAPS handle unless the landing is 100% assured.”

Training and SOPs help, but so does reading accident reports, a topic that’s back in the aviation news this month. Paul Bertorelli at Avweb wrote a thoughtful article recently about whether pilots’ obsession with accident reports are driving us all crazy (and possibly scaring off new pilots). It’s an old debate—you can read Richard Collins’s take on it from 2014—but Bertorelli brought it up again partly due to the boom in instant analysis videos on YouTube. Any time an airplane crashes, you can expect four videos speculating on the cause within 48 hours, some of dubious quality.

The worst of these videos are nothing more than digital rubbernecking; a dispassionate analysis of other pilots’ mistakes, on the other hand, can prevent overconfidence and provide real insights. If you watch one of those videos and think, “what an idiot; I’d never do that,” you’re doing it wrong. With rare exceptions, it could happen to you (or me—that was my takeaway from Beach’s presentation on CAPS non-pulls). If you watch one of those videos and think, “aviation is unsafe; I’m never flying again,” you’re also doing it wrong. Personal aviation is unforgiving, but to a large extent the pilot in command determines how safe the outcome is.

The only question that matters when reviewing an accident report is, “what would I have done differently to prevent that unfortunate outcome?” That question avoids the blame game and encourages introspection—something we all need if we want to stay safe.

When means, motive, and opportunity come together
Scroll to top