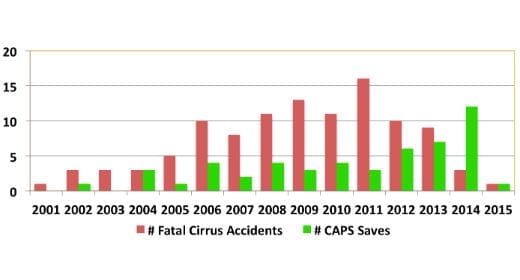 Everything is on video these days. Everything. The latest evidence? Two airplane crashes made headlines in recent weeks – one a general aviation airplane, one an airliner – and both of them were recorded so the talking heads of cable TV could instantly dissect them.

There was one notable difference between the two news stories, though. The Cirrus SR22 that splashed down in the Pacific Ocean after encountering fuel problems on a ferry flight received glowing coverage because of the Cirrus Airframe Parachute System (CAPS) it used to descend. The stories were all about “the save” and the pilot who lived. The ATR-72 that crashed in Taiwan, by contrast, was a gruesome video to watch. The pilots and many passengers died as the airplane appeared to stall and spin out of control before crashing into a river.

For once, general aviation wasn’t the one with the black eye.

The “trend” of Asian airline crashes is overblown. In spite of a few headline-making accidents, airline flying remains incredibly safe. But another trend has received far less attention, and the Hawaii video hints at it: fatal accidents in Cirrus SR20s and SR22s, the most popular general aviation airplane of the last decade, are down. In fact, they’re down significantly.

In 2014, with just under 6,000 airplanes in the fleet flying an estimated 1,000,000 flight hours, there were only 3 fatal Cirrus accidents. Considering the demanding weather conditions many of these airplanes operate in, that’s an impressively low number. This isn’t a fluke either: the number of fatal Cirrus accidents has dropped from a pretty awful 16 in 2011 to 10 in 2012, then 9 in 2013. The indefatigable Rick Beach at the Cirrus Owners and Pilots Association has calculated a fleet fatal accident rate of 0.42 per 100,000 flight hours for the past 12 months, or 0.84 for the past three years. Both of these are down dramatically compared to recent history, and are probably below the rate for general aviation as a whole. Suffice it to say, that has not always been the case.

A compelling case can be made that it’s the parachute. While some pilots spent the past few years debating the merits of a whole airplane parachute (“real pilots don’t need one!”), the Cirrus community was busy changing its training philosophy. After too many accidents where the pilot tried to be a hero and deadstick his airplane into an impossible situation, the mantra became “pull early, pull often.” While somewhat tongue-in-cheek, the lesson is serious: CAPS is an essential safety feature of the airplane, not an afterthought. A good pilot will integrate it into his training, his everyday briefings and his emergency planning.

The numbers tell quite a story. While fatal accidents have been dropping, the number of CAPS deployments have been increasing. In fact, 2014 marked the first time the two curves crossed, with more CAPS events (12) than fatal accidents (3). This is significant, because while pulling the red handle may total the airplane, the pilot and passengers will almost always survive if it’s done within the limitations of the system. Out of 51 total CAPS events, there have been 104 survivors and only one fatality.

Numbers like that should make even the most hardened cynic stop and think. In a world overrun by technology, why is this one still so exotic?

Certainly, adding a parachute to an airplane is neither cheap nor easy. At roughly 80 lbs. and $25,000, it’s not practical to add one to every airplane. But it deserves more serious consideration than most pilots give it. After all, we pay lots of money for other tools of marginal use. I think parachutes will save more lives over the next 10 years than angle of attack instruments, to take just one popular example.

Adding a parachute also won’t make you a better pilot. The red handle can’t do anything to prevent scud running and it can’t help you fly a better ILS. This raises the one serious question that remains about CAPS, and it has been debated since the first Cirrus was delivered in 1999: does the presence of a “get out of jail free card” encourage pilots take more risks? Psychology suggests that it might, but the statistics above don’t necessarily show that to be true. At a certain level, though, it doesn’t really matter. Pilots with thick wallets and thin logbooks always have and always will wreck airplanes. But if they walk away from it because of the parachute, at least they have the chance to learn from their mistake. Many doctors in V-tail Bonanzas never had that chance.

So a whole airplane parachute isn’t magic. Fine. Whether it’s ejection seats or parachutes, new safety technology is rarely perfect or cost-free. But neither is it mere marketing spin. The last 15 years have proven that CAPS is both effective and reliable technology, and with proper training it is a major safety enhancement.

The parachute is also beneficial on another level, and this affects all pilots. The ditching in Hawaii shows how powerful it is for improving our safety image if nothing else. After all, when’s the last time thousands of people watched a video of a successful airplane crash?

Cirrus pilots reexamined how they look at CAPS. Time for the rest of us to do the same.

Treat the airplane like it’s yours, even when it isn’t

Playing politics at 27,000 feet – a story from the South Pacific
Scroll to top