Just as the weather forecasters have been warning for a week, Hurricane Ian is bearing down on Florida. You’ve been watching with interest from your home on the east coast of the state, and the latest projection shows it moving right up the heart of Florida. 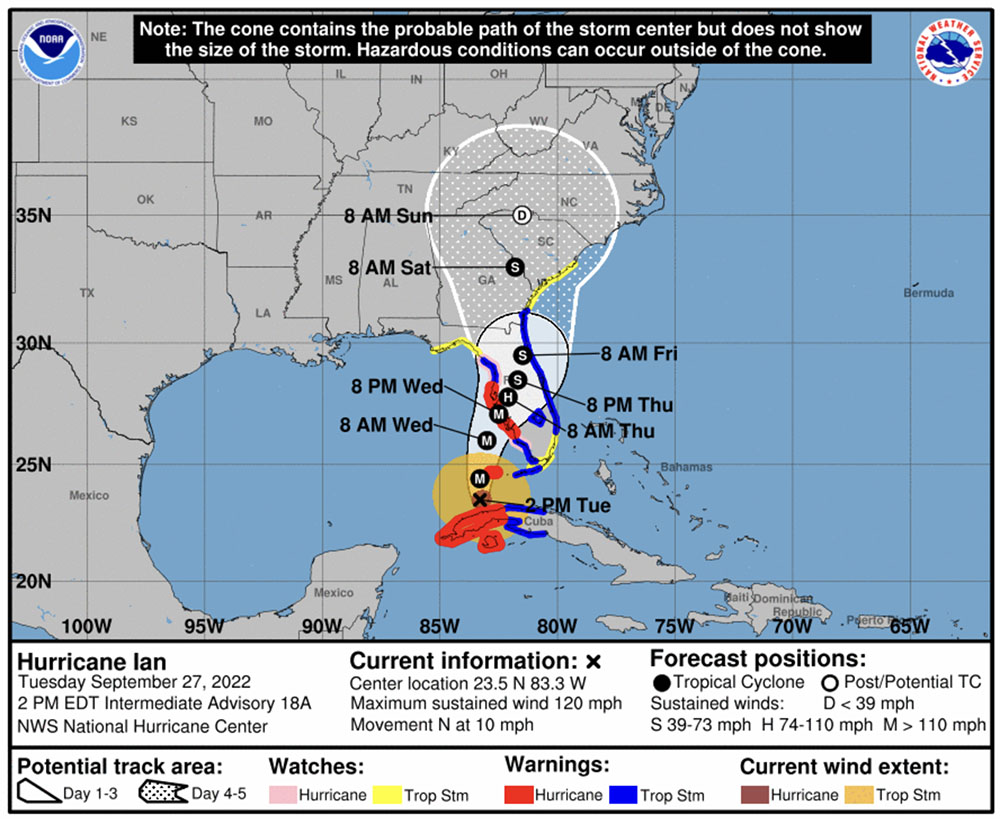 Your wife is already in Montgomery, Alabama, staying with family—now it’s time for you to make a decision. You can get in the car and drive 8-10 hours to meet her, or you can get in your A36 Bonanza and fly 2.5 hours. You’d obviously rather do the latter, but will Mother Nature cooperate? Read the weather forecast below and tell us if you would make the flight. You are IFR current and the proposed departure time is 2130Z on Tuesday.

The Maps page in ForeFlight shows the unmistakeable shape of a hurricane, centered about 80 miles southwest of Key West. The outer bands are already dumping rain on Florida. 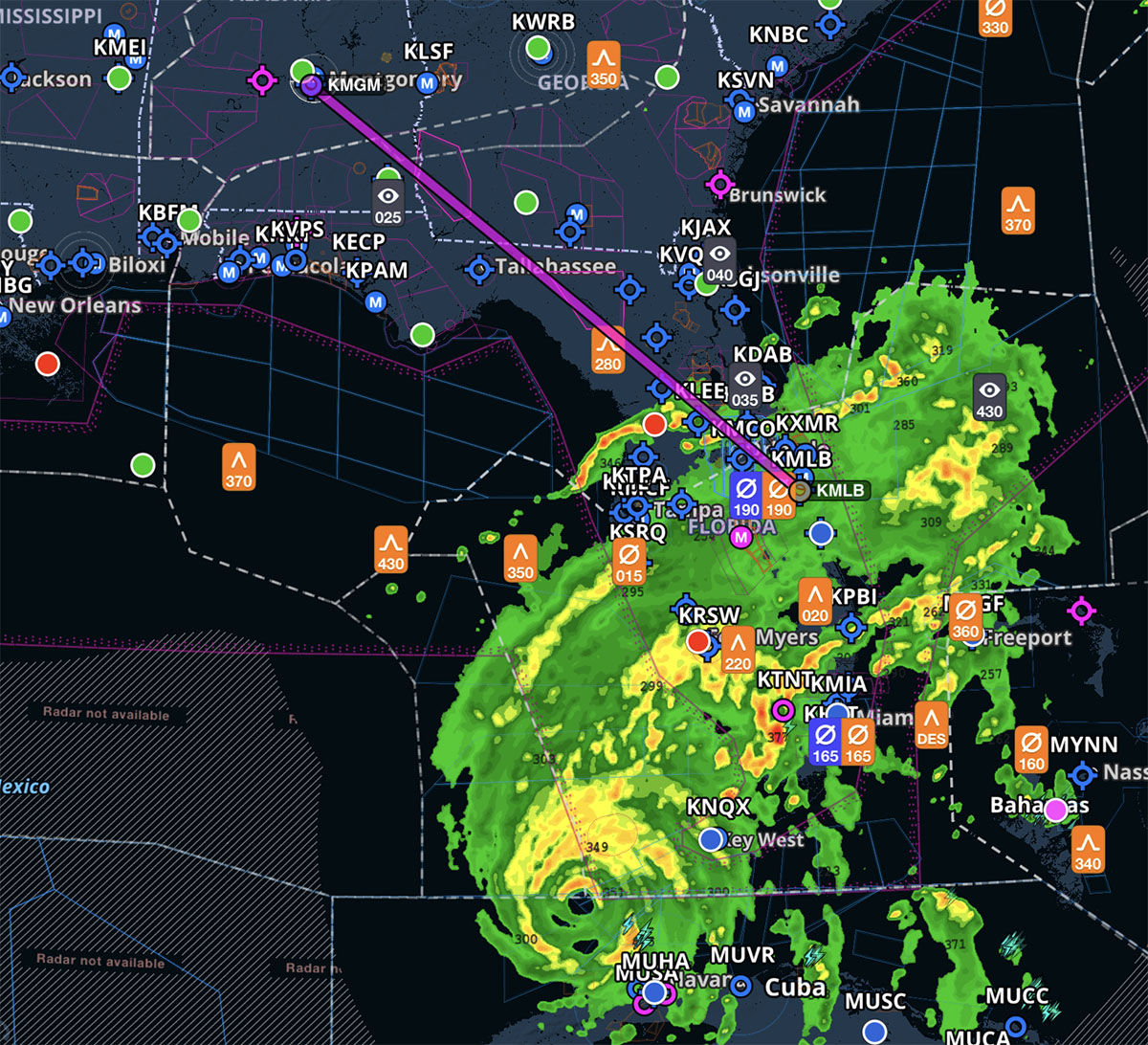 The driving force behind that weather is no mystery, but a review of the surface analysis shows that at least there isn’t anything else going on closer to your destination. In fact, the weather north of Florida looks quite good. 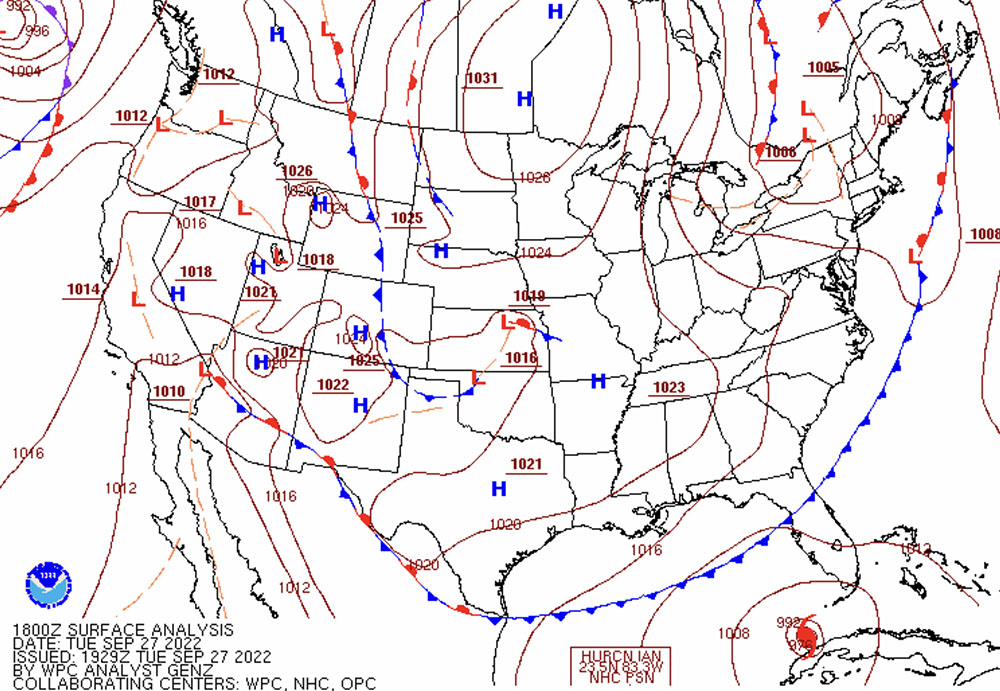 The prog chart shows the hurricane coming on shore tomorrow morning, with the accompanying wind and rain. 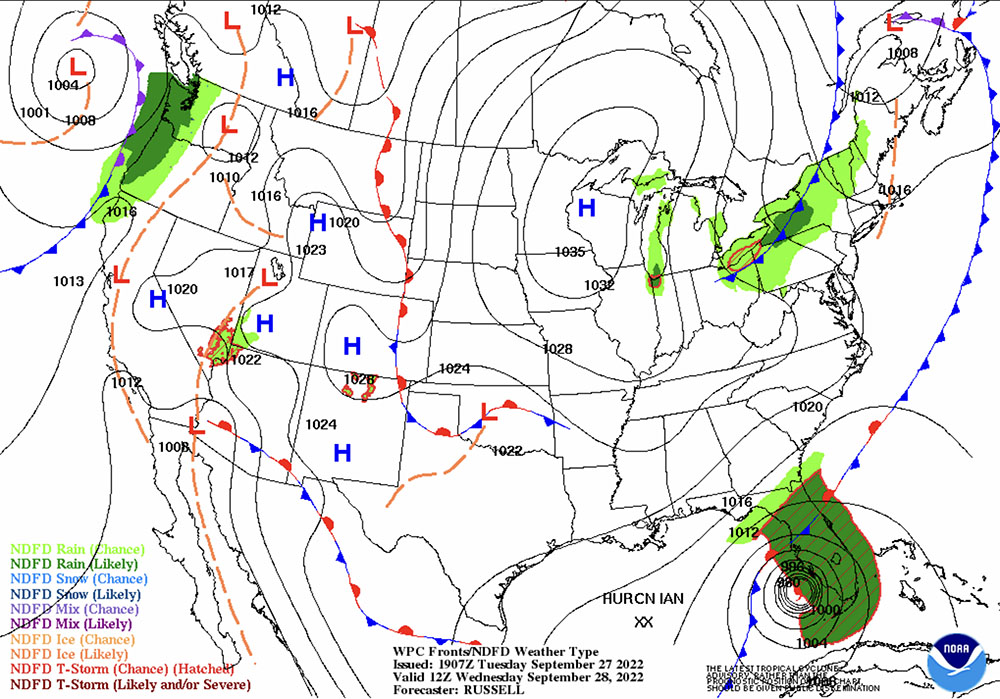 By Thursday morning, it looks like Ian will park itself over central Florida. It’s going to be a wet week. 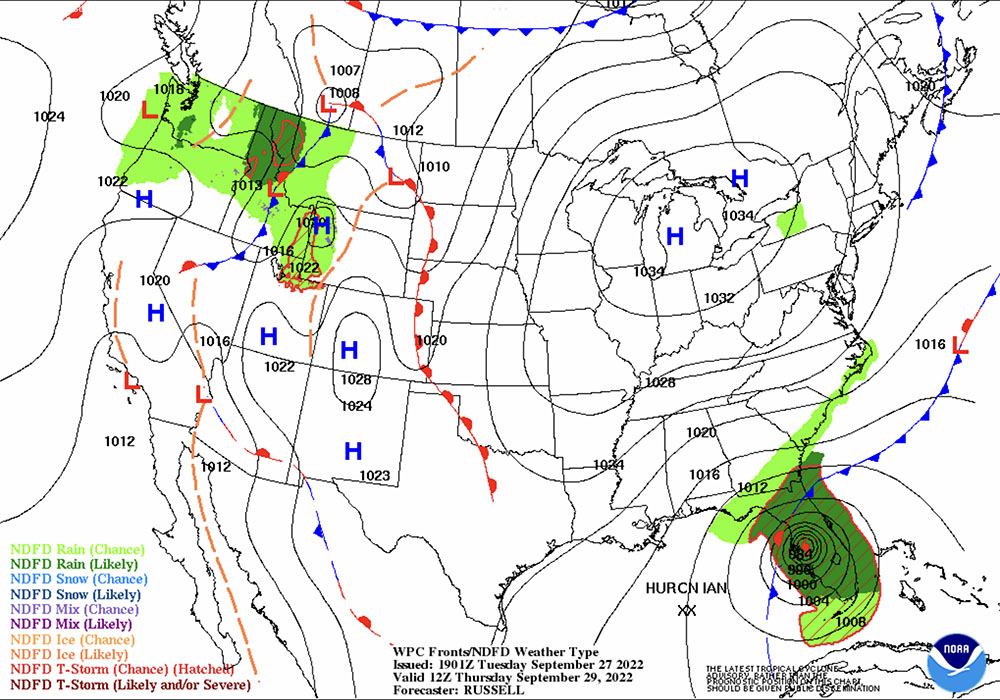 Hurricanes obviously bring rain, but how much of it will be thunderstorms? There is a Convective SIGMET over the Florida Keys, and an outlook over much of the rest of the state. 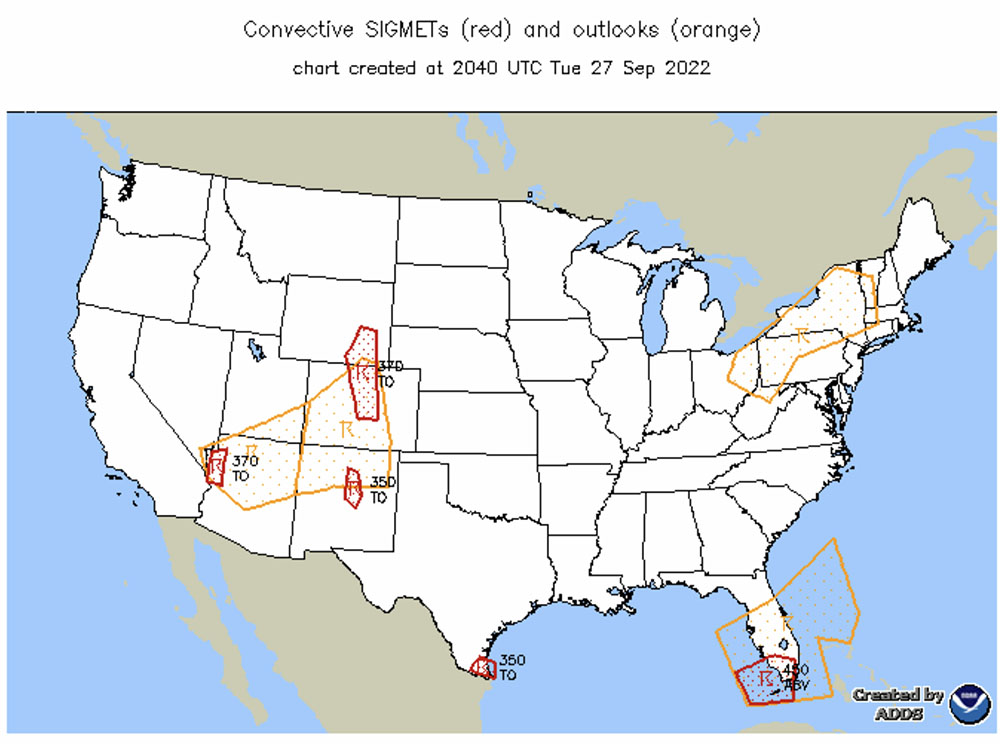 The regional radar shows mostly green and yellow, but there is a line of red north of Tampa. 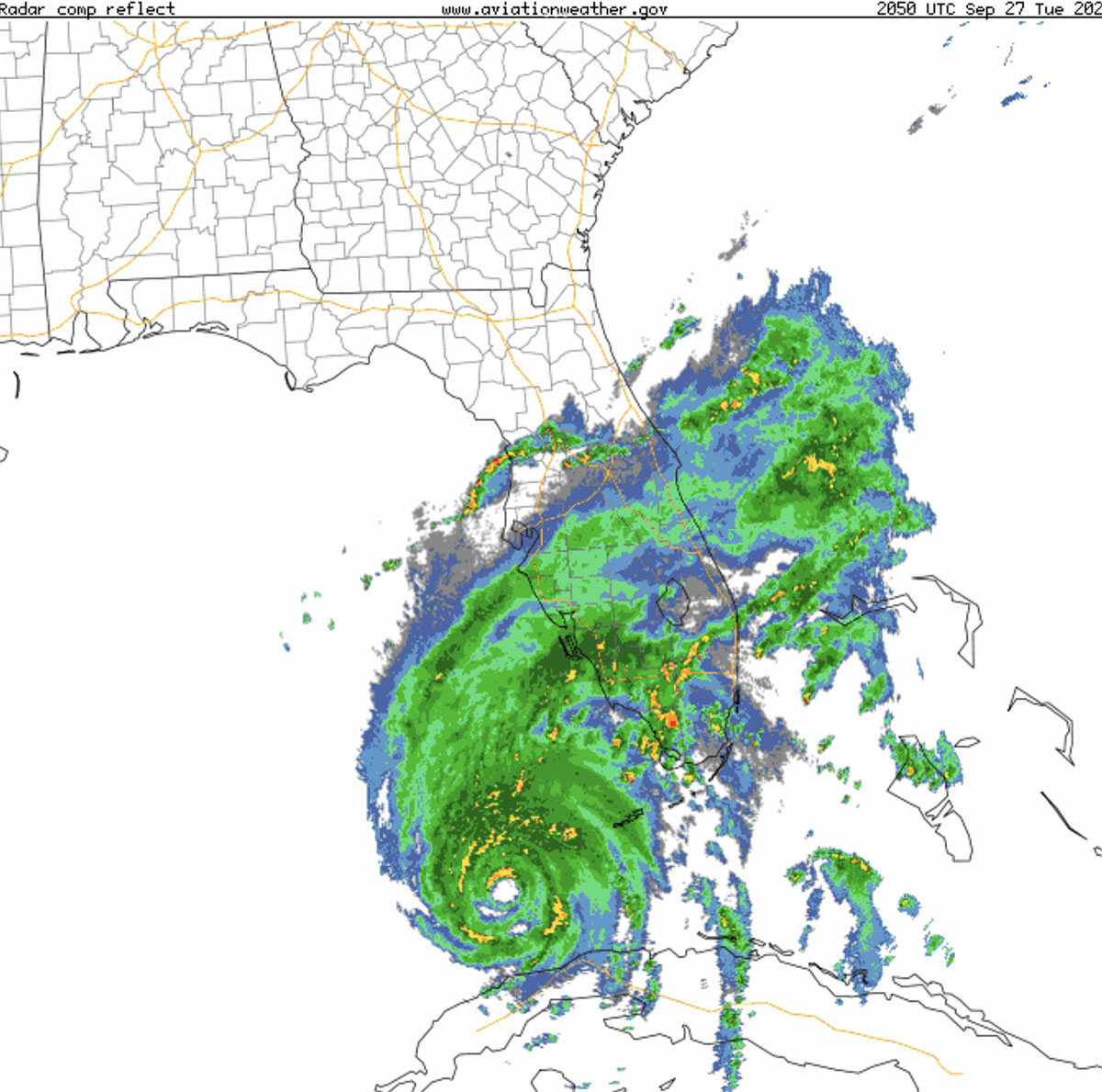 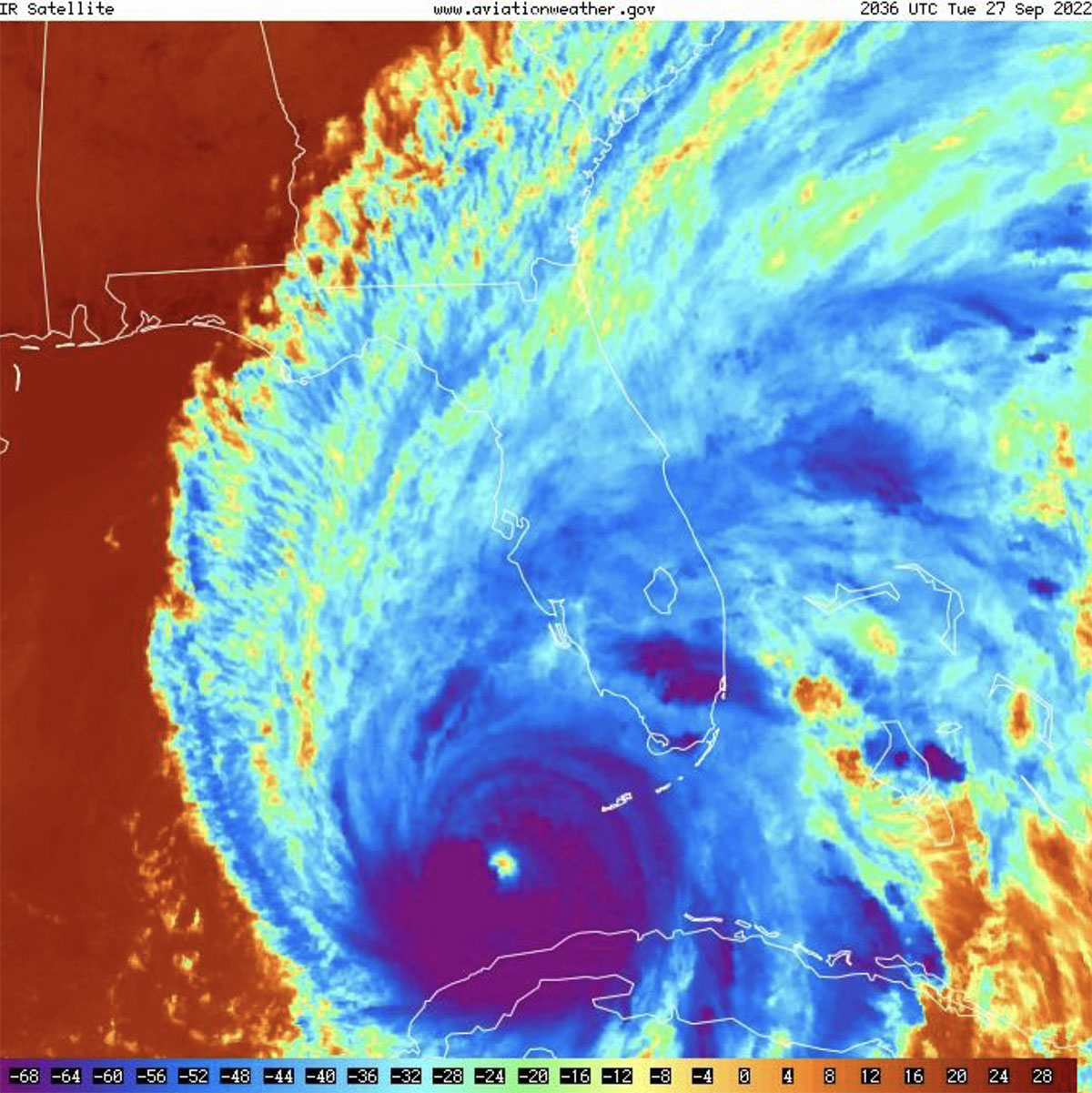 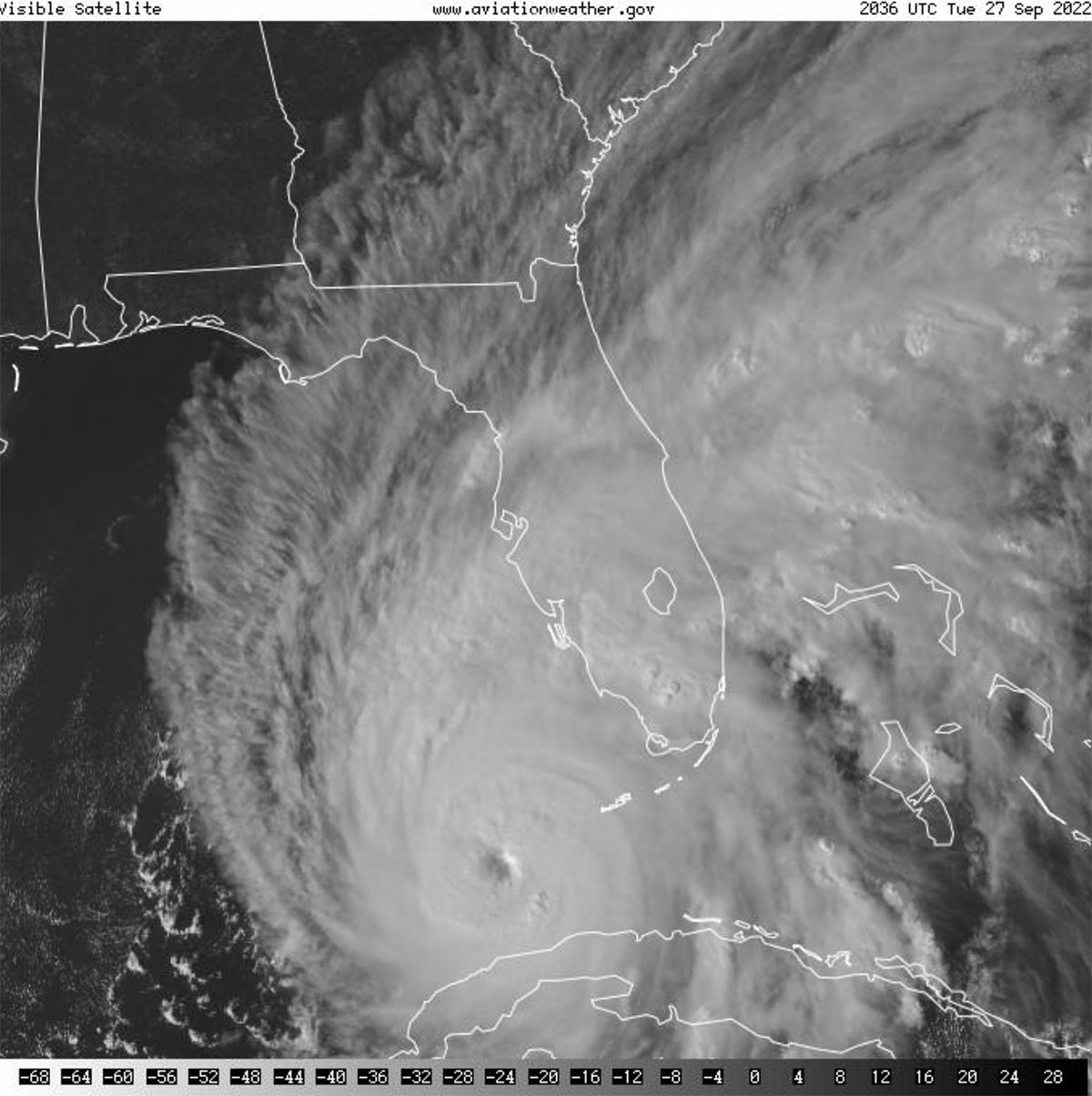 Beyond storms, is there any ice in those clouds? Fortunately the answer looks like no. Freezing levels are in the mid-teens, well above your typical cruising altitude. 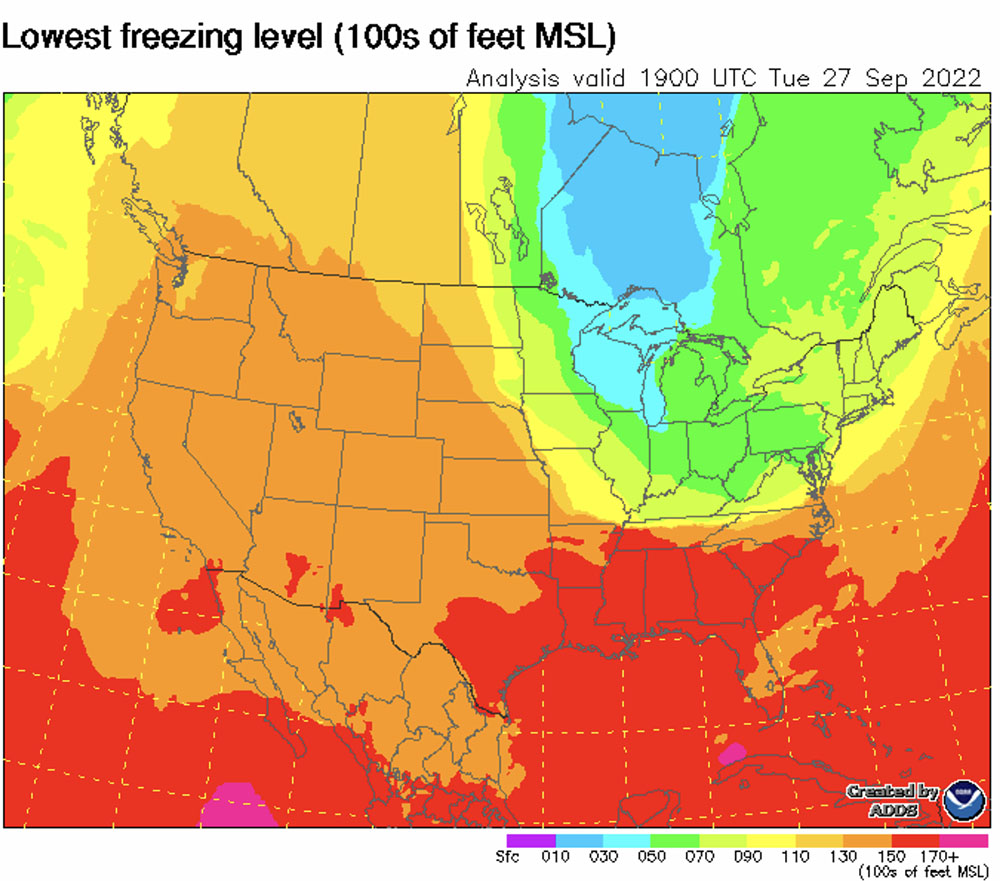 Backing that up, there are no AIRMETs for icing anywhere in the Southeast US. 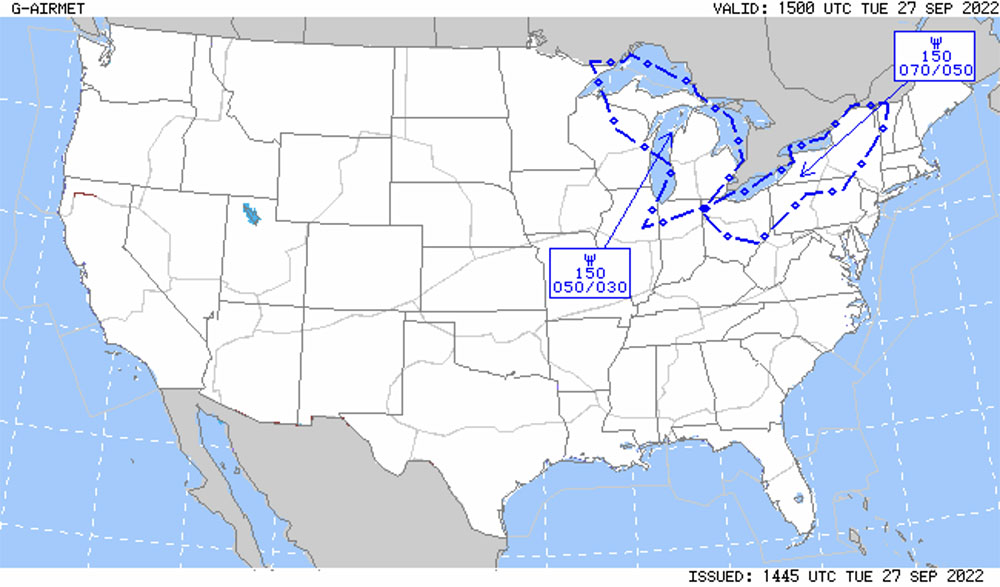 But what about turbulence, something that hurricanes are famous for kicking up? There are some AIRMETs for turbulence, but along your route they are all in the flight levels. 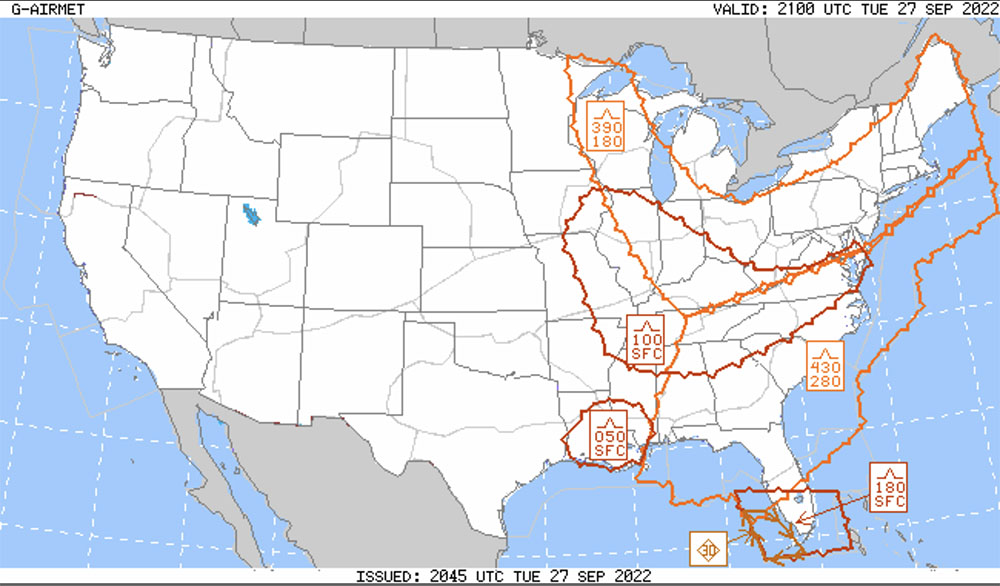 A check of the graphical turbulence forecast seems to back this up: at 9000 feet, it looks like a mostly smooth ride. 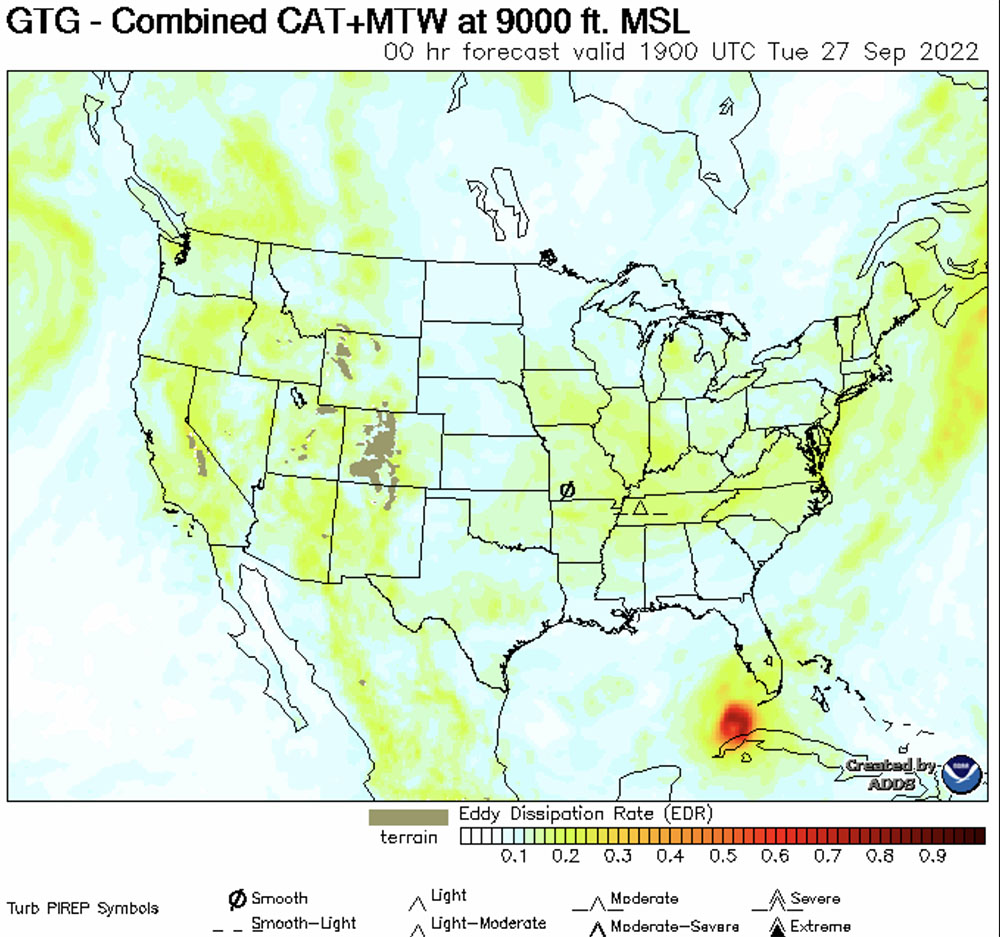 Time to get granular. What do the METARs and TAFs show along your route? At MLB, the forecast is quite colorful (in a bad way), but current conditions look pretty benign. 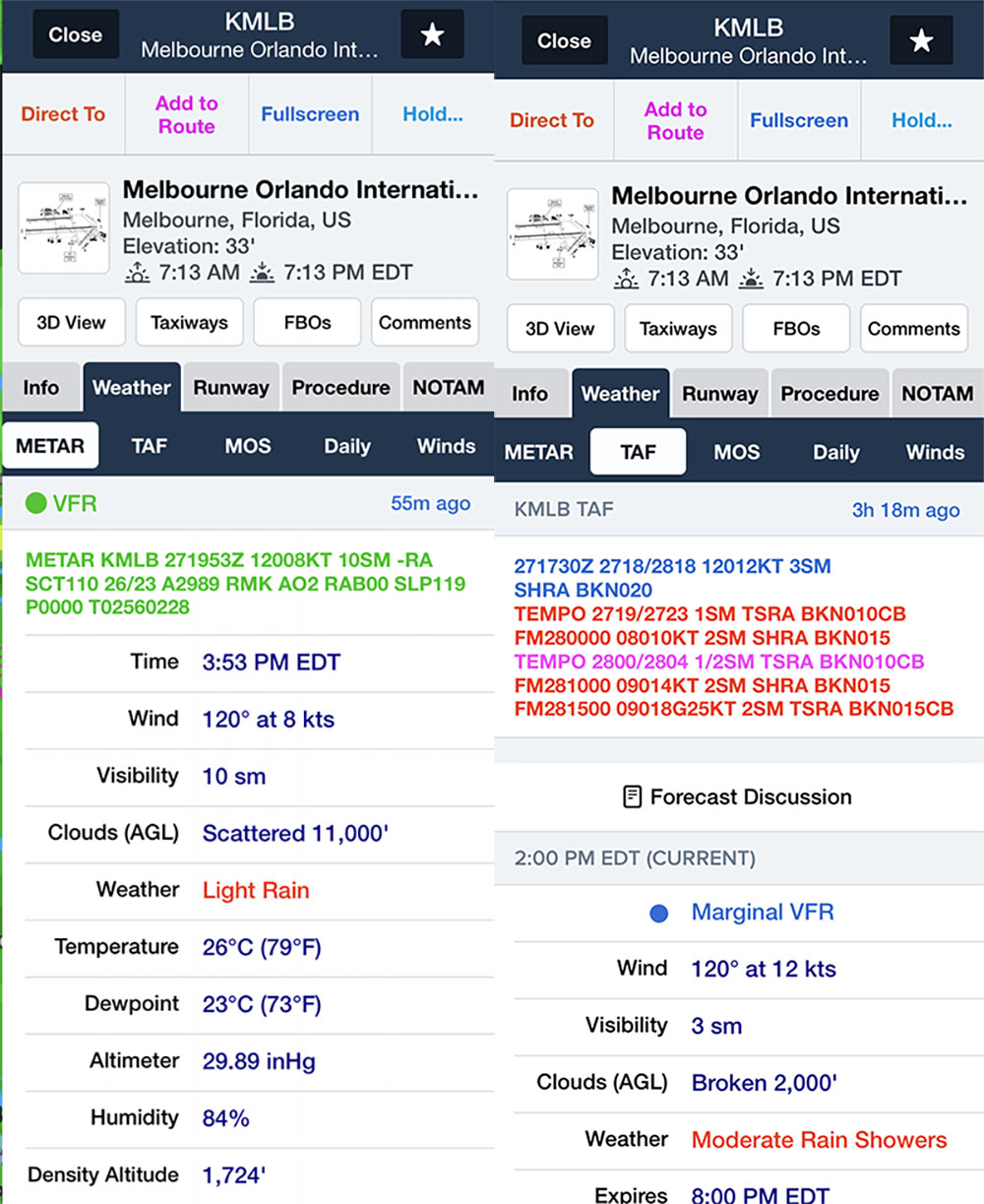 En route, it looks like you could actually fly VFR with nothing more than a scattered layer around 6000 feet. 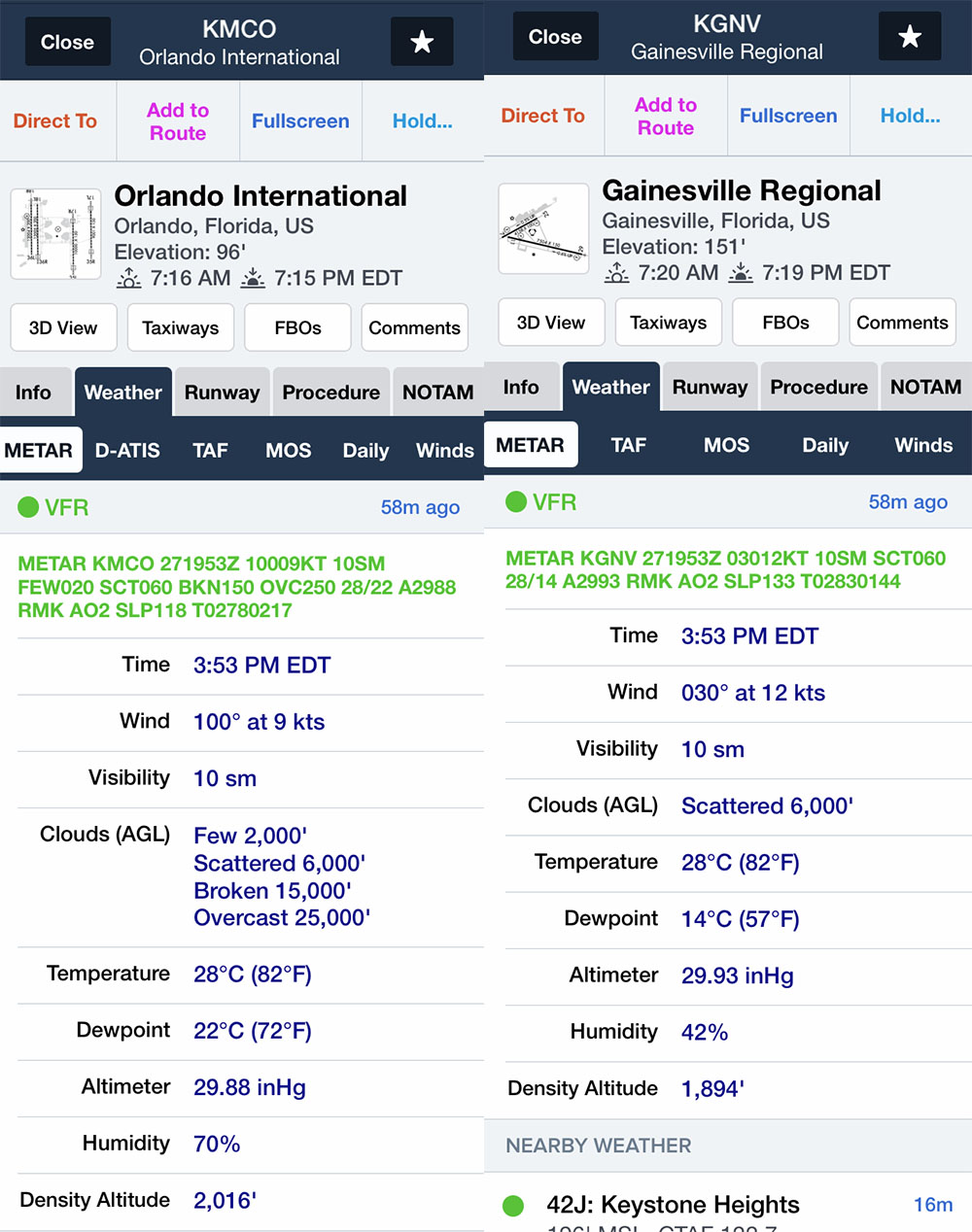 Your destination shows CAVU conditions and it’s forecast to stay that way. Then again, that’s why you’re headed there—to get away from bad weather. 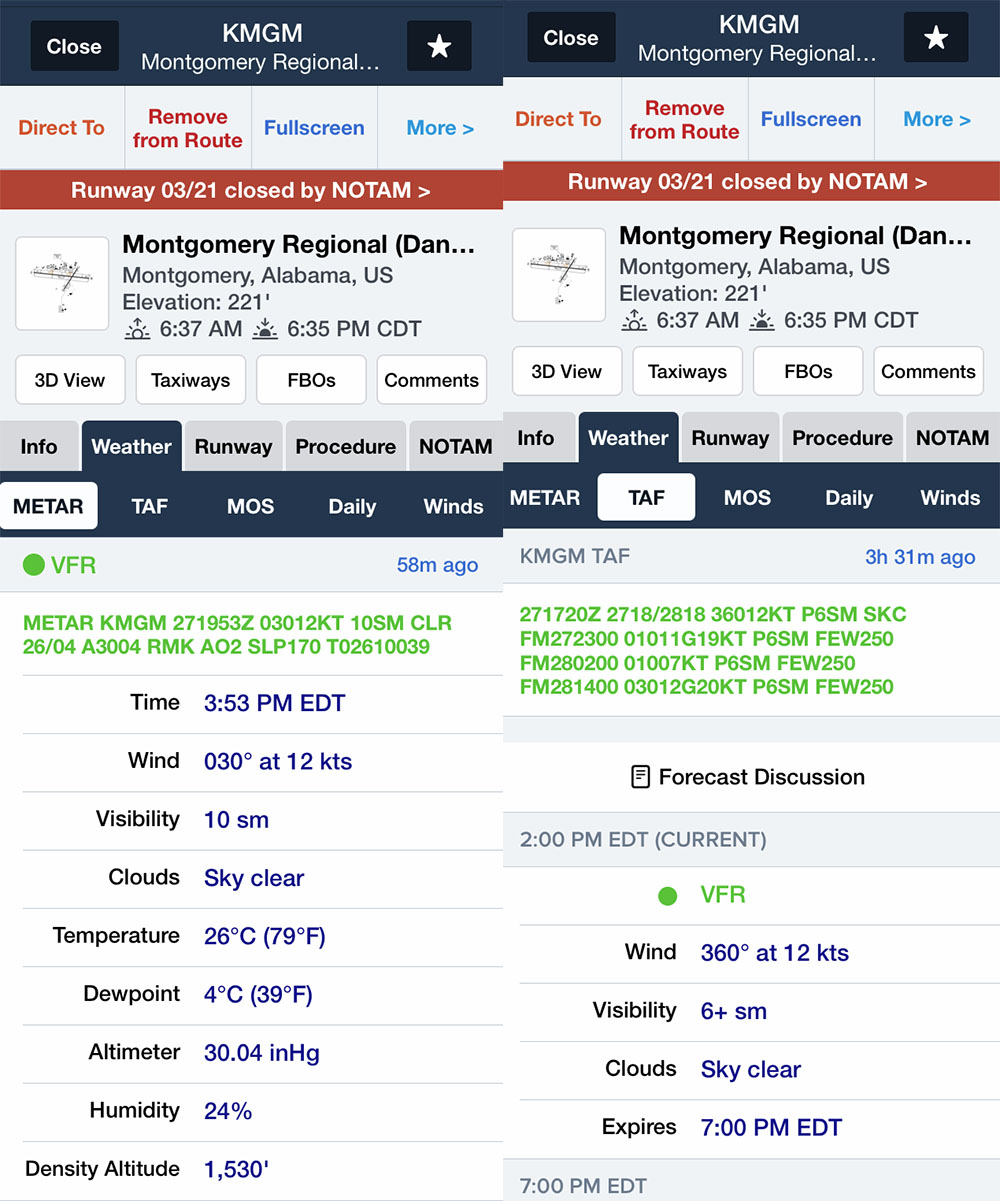 In changing conditions, pilot reports become especially valuable. There are a few around this afternoon, but most look promising. Near your departure airport, an Airbus reported no turbulence during its descent. 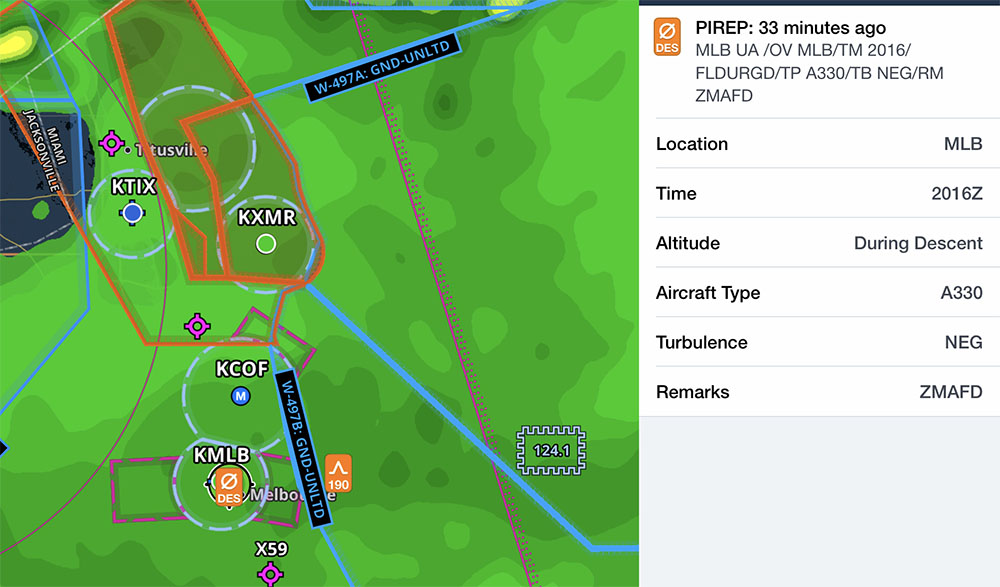 Just north of Orlando, another Airbus reported a smooth ride at 2500 feet. 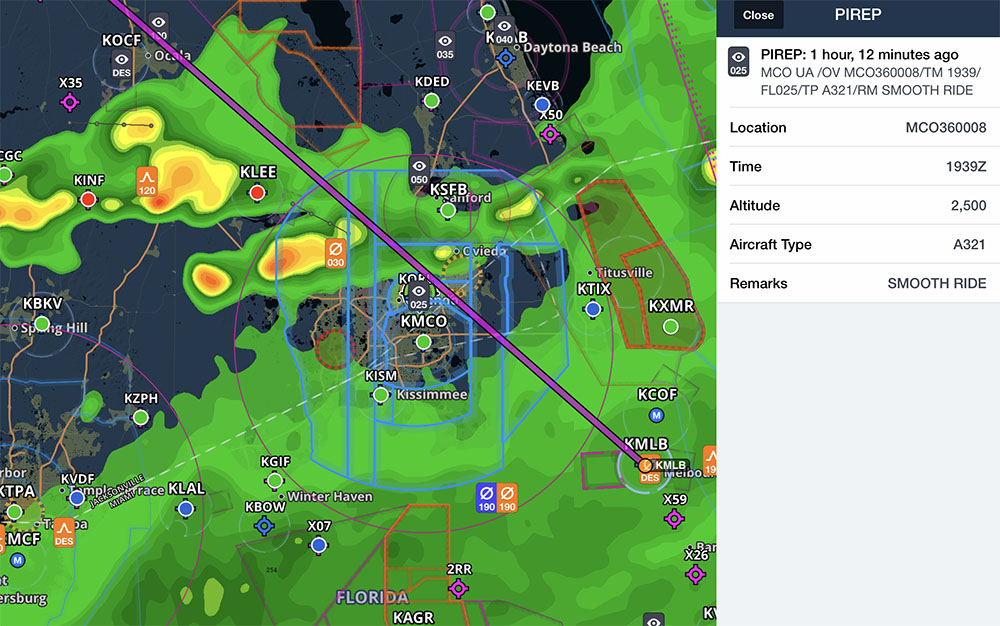 Further along your route, a Learjet reported clear skies at 10,000 feet on the north side of that line of possible storms. 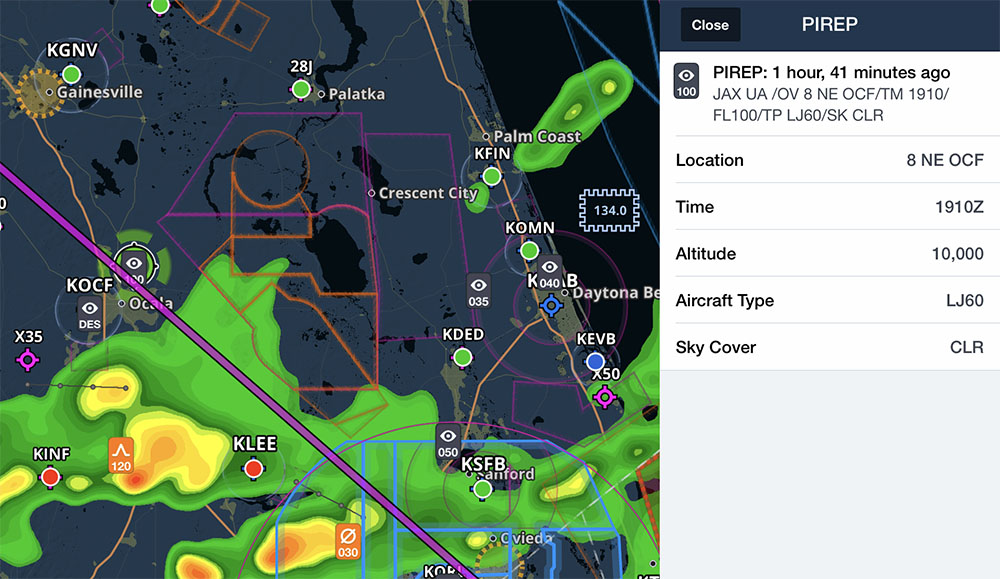 The sun is getting lower in the sky, so it’s time to make a decision. While the idea of racing a hurricane seems a little foolish, the weather conditions don’t look quite as bad as they did at first glance. There is a lot of rain out there, and some storms are mixed in there for good measure, but there might be a path out of the Orlando area. Once north of Ocala it looks like you’d have clear skies and a smooth ride. Can you get out before Ian drops the hammer?

Add your comment below and tell us what you would do.