Blog - Latest News
You are here: Home1 / Article Archive2 / I was there3 / Engine trouble over Lake Michigan 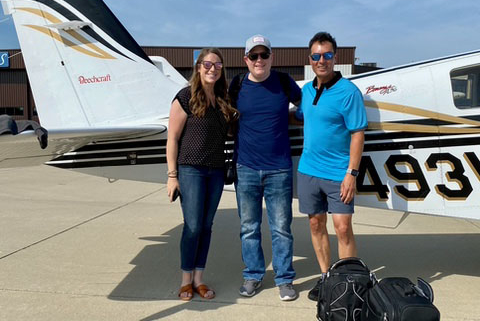 Climbing through 8,500 feet over Lake Michigan, the vibration coming from the engine cowling erupted into a full-on ruckus. The cowling was gyrating as if a wild animal was trying to get out. There was water in every direction and the Chicago skyline in the distance off the right wing.

Three hours earlier I met my Angel Flight passengers at Dayton International airport (DAY). Clear skies and a tailwind gave a predicted a flight time of 1 hour and 20 minutes to Waukegan, Illinois (UGN). At UGN we’d meet the second leg pilot, who would then fly the patient and his wife to treatment at the Mayo Clinic in Rochester, Minnesota. 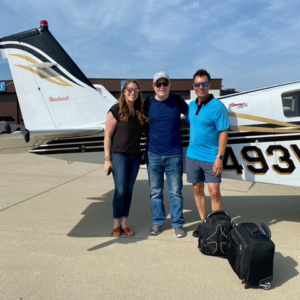 Angel Flights are a great way to use an airplane for good.

We briefed the flight and I helped them climb into the back of my 2003 Bonanza A36. After a quick radio call, we were cleared via radar vectors direct to Waukegan, and ground control gave us a short taxi to 24L. I grabbed the laminated checklist and began going through the items: oil temp and oil pressure were in the green; I had 74 usable gallons of fuel in the mains and 5 gallons in each tip tank; all doors were closed and locked; flight controls were free and proper; trim set; engine run up to 1700 RPM and cycle the propellor; mag check was good. We were ready to fly!

I confirmed that the passengers were secure and called tower: “Dayton Tower, Compassion flight 1050 holding short 24L ready for takeoff.”

I rolled the Bonanza into the middle of 150 ft. wide runway and slowly advanced the throttle. After a short takeoff roll, we were flying. I retracted the gear and, climbing through 400 ft. AGL, rolled onto the assigned heading. I was instructed to call departure control.

After leveling off at 8000 ft and completing the cruise checklist, my passengers asked if they could talk now. We had a great conversation, and I learned what a difficult health struggle the patient had been dealing with over the past eight months. Initially, diagnosed with metastatic prostate cancer at the age of 41, he was given only months to live. He didn’t accept that prognosis and sought a second opinion at the Mayo Clinic. He was treated with intensive chemotherapy and had almost immediate relief of his back pain caused by bone metastasis. It’s a long 9-hour drive of 550 miles to the Mayo Clinic from his home near Dayton, Ohio, so he was glad to find Angel Flight East. The mission coordinators had been arranging flights for he and his wife to get to the Mayo Clinic over the past several months.

What made this flight extra special for me was that I was the local surgeon who had performed his mediport placement for chemotherapy access. After volunteering for Angel Flight East for many years, this was the first time I had actually flown one of my own patients.

While talking with my passengers, I was also monitoring the engine monitor and other systems of the aircraft. The only anomaly I noticed was that CHT #3 was running slightly higher than normal. It was still well under the 380-degree threshold but just a little higher than it should be. I checked the outside air temperature. It was a hot day, even at 8000. I leaned the mixture a little and brought CHT#3 back into the normal range. I attributed the CHT anomaly to the hot conditions. I would find out later how wrong I was!

Handed off to South Bend approach, I was advised of a reroute and asked If I was ready to copy. I was given an additional fix to fly to and was advised that we would be flying over Lake Michigan at 4000 due to O’Hare arrivals. I had briefed my passengers on this possibility before we departed Dayton. We had a nice view of the Chicago skyline as we descended to 3000 and I picked up the ATIS at UGN. They were landing runway 23 with winds from 210 at 25 knots, gusting 36. I knew there was an AIRMET for low-level turbulence approaching the airport—we were in for a sporty approach and landing.

I was passed off to Waukegan tower and cleared for the visual. As soon as we departed the water and began flying over land it got very bumpy. I lowered the gear, which helped a little. Turning downwind, the stall warning horn began blaring intermittently. The forecasted low-level windshear was a reality. I was careful to keep the nose down and carry extra speed into the final approach. Crossing over the numbers, I slowly brought back the power and made a smooth landing. Luckily, the gusty winds were mostly aligned with the runway. Feeling relieved, I taxied to the FBO and shut down the engine. Little did I know that would be my easiest approach and landing of the day.

After a short break, I said goodbye and wished everyone a safe flight before heading back outside to the plane. I did a quick preflight, checking the oil and fuel levels. I knew it would be a bumpy departure but anticipated a mostly smooth and uneventful flight back to DAY. I’ve gotten good at hot starts with this airplane and once the engine was running, I called for my clearance. After copying the clearance, I was given taxi instructions to runway 23. All systems were nominal during runup, and I was cleared for takeoff. Climbing through 3000 ft., I was asked by the departure controller if I minded flying over the lake. I accepted the routing over the lake and was told climb to 9000 and cleared direct Dayton. 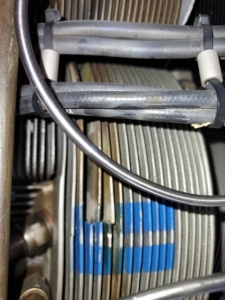 It only takes one…

As the climb continued, I sensed that something was wrong. Was it just the usual anxiety that always accompanies flying over the water or was it something real? The engine was definitely running rougher than usual. I turned on the low boost pump to get some additional cooling fuel into the cylinders, but it didn’t help. The engine continued to get rougher until it was like flying behind an out of balance washing machine filled with bricks.

I leveled at 9000 and looked around. Lake Michigan did not appear to be a good place to park the plane, so I called Chicago approach and told them I needed vectors to the nearest airport.

“Do you want to declare an emergency?” they queried.

The plane was still making power, the oil pressure was in the green, and the rumbling slightly improved when I decreased power. I said no but asked for vectors to the nearest airport. They asked if I wanted to do a 180 and return to Waukegan or go to Chicago Executive, which was somewhere off the right wing. I chose Chicago Executive and was told to turn right and descend to 4000 ft. I knew that above all else, I had to continue flying the plane. I also needed to get the ATIS at PWK and brief the approach and runway configuration for this unplanned stop at an unfamiliar airport.

The ATIS reported they were landing runway 16 and the wind was 190 at 24, gusting 32. The Chicago approach controller was awesome and got me number one to the field, but the engine seemed to be getting rougher again despite low power settings. I had the terrifying feeling that it might quit at any minute as I approached the airport. I completed the before landing checklist as I turned onto final approach and fought to keep the plane lined up with the runway while crabbed into the gusty crosswind. On short final I confirmed three green lights, indicating the gear were down and locked.

Crossing the runway threshold, I slowly brought back the power. I was high and fast and floated down the runway but thanked God as the wheels finally touched down. Tower asked where I wanted to park. I asked for progressive taxi instructions to the closest FBO. There were about ten line guys waiting outside as I taxied in. I figured they must have heard about my engine problems and rallied all available staff to help. I brought the airplane to a stop and shut down the engine, glad to be alive. As I opened the cabin door someone yelled, “Hey, why didn’t you call and let us know that you were coming?”

Since it was Memorial Day, there were no maintenance crew available on the field. Luckily, I had a friend who was able to fly up from DAY and give me a ride home. The following day I found out that cylinder #3 was cracked. I was told that it was probably minutes away from the cylinder head blowing out the side of the cowling, losing oil pressure, and destroying the engine That would have been a bad day!

In retrospect, I was glad that I made the decision to divert when I did. That decision and a little luck probably saved my life. Should I have declared an emergency? Yes! I was having a serious engine problem over a very inhospitable body of water. Patrick Larreategui
Patrick is a general surgeon living in Dayton, Ohio, the birthplace of aviation. He was bitten by the aviation bug after an intro flight in 2006 and obtained his private pilot certificate six months later. He is instrument rated for single and multiengine land airplanes. He holds endorsements for complex, high performance, and tailwheel aircraft. He currently owns a Mooney M20R. He loves sharing his passion for aviation with others. In his spare time, he volunteers for Pilots and Paws, Angel Flight East, and EAA Young Eagles. Most of all, he loves flying adventures with his wife and two children.

A surprise sunrise in an F-4 Phantom

Go or No Go: hurricane evacuation
Scroll to top