Blog - Latest News
You are here: Home1 / Article Archive2 / I was there3 / Never a dull moment as a skydive pilot 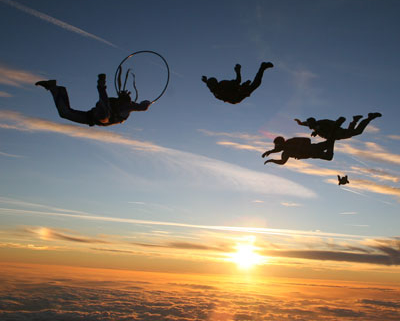 This story is perhaps not quite a typical “get-there-it is” one, but it was based on a “necessity” coupled with “she’ll be right” to get four parachutists on their way to the drop zone for a last jump, late in the day. As it turned out it could well have been a last jump for them and a last flight for me.

I was based in Australia from the Camden Airstrip in New South Wales, where the Sydney Parachuting School/Club once operated. I was towing gliders at the time at the same airstrip when I got a call from the lead jump master that he needed a pilot, urgently. I had flown for them before and being keen on building my hours in a Cessna 182 rather than mainly Pawnees and Super Cubs, I “jumped” at the opportunity.

When I got there, the regular 182 was ready to go, as the duty pilot had finished for the day, refuelled for the next day’s ops, and gone home. Four skydivers were waiting (a jump master and three jumpers), two I recognised and one new guy. This was one more jumper than normal and my understanding was that the new guy was on a qualification jump. 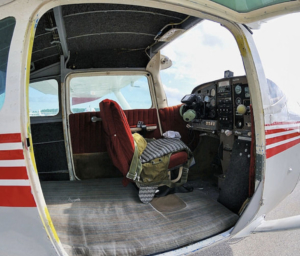 With no seats, skydivers can move around the cabin of a 182 quite easily—maybe too easily.

We loaded up with the new guy down the back, the two regulars in the middle, and the jump master in the front next to me with his back to the instrument panel so that he could observe all that was going on and control the sortie.

I did think at the time that with a full fuel load and four heavy weight jumpers I was pushing the 182 a bit, but the old girl had a big engine, a large wing area and we had a 5000 ft. sealed runway. This was plenty big enough for a 182, as I had towed heavy gliders behind a 182 from shorter grass strips. “She’ll be right,” I reckoned.

We lined up, got clearance to go and I opened the tap on the 182. She accelerated a bit slower than normal but we managed to get off the deck OK, when suddenly at approximately 200 ft. the jump master lurched towards the back of the aircraft. Unfortunately for me, his parachute had somehow snared my propeller control and put the 182 into full coarse pitch. With a constant speed prop aircraft, on takeoff you need full fine pitch to get a grip on the air at relatively low speeds. The sound of the change in prop pitch was heard all over the aerodrome and as my fellow tug pilots told me later, they could not understand what the hell I was doing.

In the split second of the pitch note change, I realised what had happened and grabbed the jump master’s helmet to pull him back against the instrument panel. Fortunately for me, he (being an experienced jump master) also heard the pitch change and instinctively stopped moving, thus helping me pull him back to regain fine pitch, maintain control, and resume the climb out. Mind you we were all a bit shaken.

We cleared the trees at the end of the runway comfortably and continued the climb out to a safe altitude. Do we go back or continue to the drop zone? As we were now safe and the two regular jumpers did not want to waste the opportunity to jump, we went on to the drop zone, offloaded the two regulars, and I returned with the jump master and new guy still on board. You may well ask why did those two return, rather than jump?

Firstly, why had the jump master lurched towards the back of the aircraft? From the start, I had noticed that the jump master appeared to have been keeping a close eye on the new guy and generally talking to him a lot—reasonable for a qualification jump, I figured. However, the new guy was acting somewhat nervously, fiddling with his reserve chute at the start of the takeoff run. A sudden realisation by the jump master that the pins on the reserve could pop at any moment prompted him to act quickly. It did not take much imagination on his part to work out what could happen if the reserve chute deployed inside the cabin with the door open and at low altitude.

He lurched towards the guy in an attempt to get to him before the pins popped, but unfortunately they did pop. Because I had grabbed the jump master’s helmet to pull him back, the other two jumpers also saw the danger and forced the guy down on top of his reserve chute. By focussing on the reserve chute deployment, the jumper master had overlooked that a rapid move all the way to the back of the aircraft would have shifted the CG aft, which, at our weight and low speed, would most likely have caused a potential loss of control. At our low height and speed, the jumpers could not have exited the aircraft and I doubt anyone would have survived. 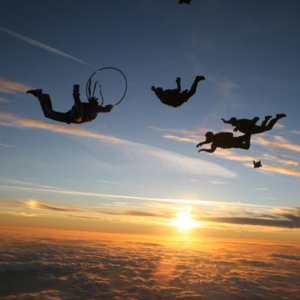 Not everyone is cut out for skydiving.

Secondly, why was the new guy fiddling with his reserve chute inside the aircraft? This is not normal practice under any circumstances. As it turned out (unknown to me at the time), the new guy had in fact, recently developed an anxiety issue with jumping and was on a check jump to determine his future in the sport. Apparently the other jumpers were going along with him in support. I don’t think that this knowledge at the time would have influenced my decision to go as I would not, in my wildest dreams, have anticipated such an incident to occur.

I did fly for that skydiving club again and was involved in two further potentially fatal incidents, not to me or the 182 but rather to two jumpers early in their sky diving careers. Both incidents were classified as accidental events that occurred outside the aircraft. Sometime after my takeoff incident, a Cessna Caravan with a load of jumpers on board crashed on takeoff from a nearby airstrip, resulting in fatalities and serious injuries. That was rather sobering as I do believe Lady Luck was very much by my side that day—our takeoff could also have gone horribly wrong as it did for those in the Caravan.

An emergency usually happens when you least expect it. It can take only a few seconds to develop and end just as quickly, one way or another. We all learn from emergencies—or should.

God bless the person(s) who designed the Cessna182. The old girl is more likely to have saved us on that day rather than any actions I/we may have taken. Wes Madycki
While still studying at university, Wes saved up and learned to ﬂy at $12.50 per hour (while holding part time work that got him about $25/week). What with other expenses, it took a long time but he did eventually get his pilot's license, all done in an Australian designed training/touring aircraft, the Victa Airtourer 100 & 115 (ﬁxed pitch prop and ﬁxed gear). Glider towing (and also ﬂying them) commenced when Wes was working at HdH in Sydney and went on for many years, contributing to his tally of ﬂying hours in a variety of aircraft. Flying parachute sorties came quite by accident but was enjoyable. For the last 15 years he been rebuilding/refurbishing a Victa Airtourer 115 with a 160hp engine and constant speed prop. It was supposed to take only two years at the most but as most refurbishers can testify, it takes way longer. Now it is just the paperwork to complete, which is almost as big a job as the physical work and nowhere near as much fun.

A surprise sunrise in an F-4 Phantom
Scroll to top