Blog - Latest News
You are here: Home1 / Article Archive2 / I Can't Believe I Did That3 / A simple oversight almost ruins a bucket list trip

Like a lot of pilots, most of my flights are around my home field in Andover, New Jersey, since I long ago gave up IFR currency (my plane is a 1963 Super Cub and strictly VFR). I suppose a trip to OSH was on a bucket list somewhere in a drawer, but ingrown laziness and insecurity had kept it a wish list rather than a to do list. Until one day in July 2014 my old flying buddy Lyle raised the possibility that I might try to make the trip.

Despite a lot of hours—but accumulated slowly over 50 years—I had a lot of trepidation. A decision was finally forced on me when Lyle, a CFII and ATP with 5000 hours, surprisingly agreed to come from Chicago to share the trip with me. Lyle wasn’t current in the Cub and scheduled some dual with Damian DelGaizo at Andover. I thought that would buy me some time, further delaying a trip that I felt was beyond me. No luck! Lyle was checked out in one hour and we were good to go the next day.

From Andover I flew the first leg to Lock Haven, Pennsylvania, the Cub’s birthplace. I was so nervous that my first move was to the bathroom, where the facility was probably rendered NOTAM closed for an hour. We topped off and I climbed up to check the tanks, which was probably my first mistake. Lyle took the front seat and I squeezed all 6‘ 1” of me into the back. Lyle cranked the starter and we heard a bang like something hitting the plane. We ignored it. Second mistake. 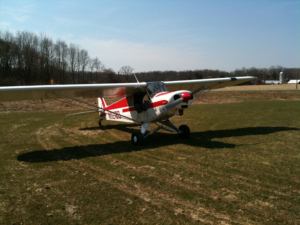 The perfect airplane for a trip to OSH—if you have enough fuel.

The next stop was New Castle, Pennsylvania. I got on a ladder and started to top off the starboard tank and was surprised to see a lot more than 18 gallons going in. But where was it going? We’d only been flying a bit more than two hours or so from Lock Haven and could not have burned that much. Moving over to the port wing I saw what was happening: the gas cap was gone, and it dawned on me what that bang noise was back in Lock Haven. I’d failed to secure the cap and the fuel had been sucked out all over the state of Pennsylvania for 180 miles. I got this sinking feeling that our trip to Oshkosh was over almost before it started. It did not even occur that we could have been forced down by fuel starvation as well.

A couple of the locals in the hangar tried to help us out finding some sort of replacement cap but nothing was really going to work. On a lark we decided to call the FBO at Lock Haven in a desperate attempt to find the missing gas cap. In a remarkable stroke of luck, the lineman came back with the cap—which was laying on the ramp. Would we pay to have it shipped to New Castle? Absolutely! It meant staying overnight in Ohio in a smoking room at a local motel, but the next morning the gas cap arrived by FedEx and we were on our way.

Dodging a hailstorm and hanging below low overcast, we arrived at Waukegan late in the day and hung out in Chicago until Monday morning, when we completed the trip and entered the conga line to Oshkosh. We spent a great day hanging out seeing the exhibits and air show. We also got a kick out of being ushered to the vintage lot.

Leaving late that afternoon, we returned to Chicago and eventually I flew back to Andover solo, talking to the greatest folks in flight following from O’Hare to Lock Haven and into Andover. And despite a bad start, I finished one of the greatest experiences in flying and crossed off one more item from the “to do” list. William Reyer
Bill is a retired dentist/endodontist and lawyer living in Westhampton, Long Island, New York. He started flying Super Cubs when he was in the Army Dental Corps at Fort Sam Houston, Texas, in 1964 and flew 96 hours that year and got his private ticket in August 1965 just before he was transferred to Germany and stopped flying. One day in Scottsdale, Arizona, with a new wife and some good weather, he took a shot at some dual and was back into flying. More dual and an IFR rating at 67 and he was finally back into a Super Cub. At Andover, New Jersey, he has a share in 121BB, a restored 1963 Super Cub in 2009.

Never a dull moment as a skydive pilot
Scroll to top