Blog - Latest News
You are here: Home1 / Article Archive2 / I was there3 / When things went wrong in a good way

The early 1990s was one of those windows of time where my funding, opportunity, and inclination came together for flying. I decided to work seriously toward my instrument rating and commercial license. This involved “build time” and especially cross-country time. Fortunately I was living in Northern Virginia, which is rich in destinations just far enough away to be logged as cross-country, but not too far away to make it more than a nice morning or afternoon adventure. Many of these also featured the famous $100 hamburger. 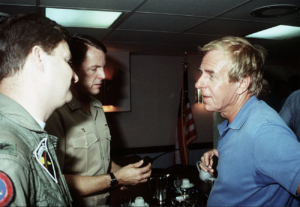 When your flight instructor is a foreign correspondent, you fly when you can.

I flew out of the Leesburg, Virginia, airport (now JYO). This is just northwest of Washington, DC, and not too long a drive from where we lived. This airport served as a general aviation reliever for both Dulles (IAD) and National (DCA) airports for many business and personal flyers, and their proximity provided motivation for getting an instrument rating. My flight instructor was an interesting guy, Carl Rochelle. Carl was a correspondent for CNN with a sonorous reporter-type voice and a serious demeanor—sort of like a bulldog. He frequently traveled for CNN and this played a role in how often I could fly with him, since this was during the Persian Gulf war and he was often deployed to report on events.

The experience that follows was one of the last times I flew with him before he deployed to the Persian Gulf. I wanted to get as much instrument instruction time as we could before he left, and I got my wish in spades.

I was far along in training, so most of the air work was refining procedures plus logging simulated and as much actual instrument time as conditions permitted. The PA-28 we normally flew had the requisite six pack, dual radios, VORs, and an ILS receiver, but obviously none of the more fun things like GPS and glass instruments. I had my trusty “Foggles” and Carl had his packet of Post-It notes to create “failed” instruments as needed. Simulating instrument conditions obviously allows much more efficient and safer training, especially early in training since you can fly instruments in good or bad visual conditions and often not have to work with an air traffic controller in the system. Later, filing and flying IFR (especially in real conditions) is preferable but not always available.

I was getting pretty proficient at this point in training and on this day we were flying in actual instrument conditions with low cloud ceilings (700 feet at JYO as I recall) and completely in the clouds except on final. Did I mention mild to moderate turbulence? No Foggles needed—this was coming together to be the real thing from end to end. The flight planned for the day was Leesburg, Virginia, to Martinsburg, West Virginia—and maybe others—for as many instrument approaches, missed approaches, holding patterns, instrument failures, and the like that time and energy would permit. This would be followed by a final, beautifully-executed full approach back into Leesburg. All good stuff for a couple of hours plus in the air, but it was not to be exactly as planned.

About halfway back from Martinsburg, the controller working us put out a general call to everyone on the frequency to be alert for the JKJ Chevrolet advertising blimp that had broken away in the wind. It was presumably in the clouds somewhere along our route back to Leesburg, but we never saw the blimp or anything else on the ground or in the air for that matter. (Never felt it either.) This was the beginning of the more interesting concluding events of the day.

Leesburg Airport was still under instrument conditions, so the final landing was also going to be a real VOR approach and a fine ending to the day. Everything went fine until about halfway through the approach when the VOR receiver lost track and the little red flag appeared. Carl had nothing to do with it. I called our approach controller with a missed approach and started the missed procedure. ATC told us after a few minutes that the VOR had gone off the air so no instrument approach to Leesburg was possible at that time. He suggested that we land at Dulles International Airport, just a few miles away, to wait. 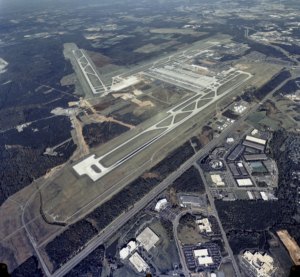 Dulles is an awfully big airport when you were expecting Leesburg.

We were vectored to Dulles and executed a nice ILS approach. When we broke out of the clouds, there was the runway right ahead of us, just where it was supposed to be. (Hey, all this stuff really works, and apparently, I can do it even when it wasn’t planned.) On the parallel runway, a 747 had landed just ahead of us! Of course, our Vne and his normal landing speed were comparable, so he was at the gate unloading by the time we touched down and taxied to the FBO. We got to park with all the business jets and spend some quality time in the pilot’s lounge. (On a different trip into Dulles I did an approach while the Concorde supersonic jet was landing on a parallel runway. They were also parked by the time we finally did our missed approach.)

Inside we helped ourselves to the free coffee and popcorn, generally acting like real corporate pilots. (No leather however, this was July.) The FBO parked us behind a corporate jet and only had the wheels chocked, not tied down. We noticed that the jet was starting up, so I went outside to sit in the aircraft to make sure it didn’t move with the jet blast. It worked, but I was bathed in jet exhaust, warm air smelling of kerosene. No problem and maybe adding to the adventure.

In an hour or so we got word that the VOR station we needed for the approach was back on the air, so we made an uneventful takeoff and trip to Leesburg—15 minutes takeoff to landing. That marked the end of a heady day of flying and pleasant drive home. The adventure continued, however.

That evening I was scheduled to take a flight to Europe to teach a short course. Sometime into the flight my skin started itching and I turned a nice light shade of red, sort of like a mild sunburn but with no pain. It went away a few hours later–apparently, I was reacting to one of the fuel additives from the corporate jet.

Well, Carl deployed to the Gulf not long after the flight I’ve described, and simultaneously both money and opportunity to fly also disappeared for a while. I chalked this experience up as a very interesting and satisfying day, and the basis for a great hangar story. I finished my instrument rating flying from Quantico, Virginia, with the Marine Corps Flying Club, and took my checkride with a very experienced designated examiner.

I told my story to the examiner after he had signed me off and we were walking back to the FBO. His reaction surprised me a bit: that this was probably the best day of training that I could have ever received, and he wished that everyone he signed off had a similar story. He said that in his experience, most instrument training was only done under simulated conditions, and with only very predicable instructor-induced failures with which to deal, and those only done one at a time. He believed that pilots who trained that way could pass a checkride and become technically qualified but often lacked the confidence to fully use their rating, and some failed badly when they encountered their first real instrument conditions as a pilot.

From his standpoint then, my day had it all: actual instrument conditions throughout, wind and turbulence, three airports (class B, C, and D), multiple kinds of approaches, holds, and missed approaches, a real incident, and several simulated. In retrospect I agreed with his assessment, since I never had any hesitation in filing and flying in actual IFR conditions, subject to personal minimums of course.

As a footnote, this flight would be very hard or maybe impossible to duplicate now because of stringent flight restrictions in the National Capital Region. Moreover, the $100 hamburger is now more like $250 with current rental and fuel prices. On the other hand, while you would likely be flying the same types of aircraft that I did, it would certainly have ADS-B, a good GPS, maybe a glass panel, and very likely at least an iPad with a moving map display. Randall Shumaker
Randy soloed at 17, earned his private license at 18, with new ratings over the years as time, opportunity, and finances allowed, adding first Instrument then Commercial and multi-engine. He enjoyed flying for both business and pleasure including some exciting cross-country adventures. His early engineering career involved test and evaluation of the gear needed for operating aircraft from ships. Since retirement he serves as a docent in a warbird museum where many of the Navy aircraft types that he worked with are now primarily of historical interest. He still looks up whenever he hears an airplane overhead.