Blog - Latest News
You are here: Home1 / Article Archive2 / I was there3 / Special VFR—sometimes it’s the best option

When I went to Alaska, I had 500 hours in my logbook and a list in my head of things that I’d never do in an airplane, all things that the wise old owls had warned me about. By the time I left four years later, I’d made the transition from inexperienced greenhorn to cocky amateur and finally to competent operator. And I’d checked several of those “I’ll never” items off my list. This is the story of how I got stuck on top of an undercast in a VFR-only Super Cub in the last hours of daylight, and why it helps to understand things like Special VFR even if you never plan to use it.

I bought a Super Cub a year after I got to Alaska, and from then on my entire off-work schedule revolved around whether it was a good day to fly or not. This particular day was a good one: it was a late fall day in front of the long winter when each day is seven minutes shorter than the last. My friend Sean (who also had a Super Cub) called to ask if I wanted to go fly with him into the mountains behind Anchorage. 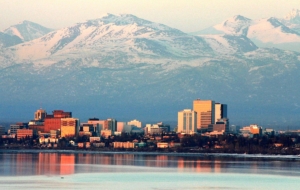 The mountains are tantalizingly close to Merrill Field in Anchorage.

The forecast called for good VMC through the rest of the day, and Sean agreed to fly over to meet me at Merrill Field, where I kept my Cub. Merrill Field is a Class D airport that sits at 137 feet above sea level, but the mountains rise above 7000 feet just a few tens of miles to the east. This playground for outdoor enthusiasts of all types contains gravel bars, glaciers, rivers, lakes, and all sorts of interesting sights. I spent a lot of time back in there in the Super Cub, landing on gravel bars and skimming along the ridge tops looking for mountain goats.

After a quick brief, Sean and I blasted off in a loose formation towards the mountains to the east. The air was clear and calm and perfect for flying in the mountains. We switched to an air-to-air interplane frequency after we checked off with the tower controller and had a blast skimming through the mountains like two Super Cub pilots are wont to do on a beautiful day.

After about an hour, we popped out about 30 miles southeast of Anchorage over an inlet of the Pacific Ocean that leads back to town. At this point we realized we had a problem: all I could see to the west and north towards Anchorage was an undercast! What had happened in the hour since we left?

This was long before the days of datalink weather, so Sean and I left the interplane frequency we were sharing to check the weather at every location we could think of within range of our fuel and daylight. The weather at Merrill Field, where we had departed in good VFR slightly more than an hour prior, was 700 overcast with four miles of visibility. Uh oh.

Back on interplane, we considered our options, none of which were good. I had about two hours of gas in the Super Cub, Sean had the same, and we had about an hour of daylight left. There was no airfield I was aware of that we could reach within the constraints of our daylight and fuel, but I knew that we needed to keep heading north towards Anchorage. Potentially, I thought, we could work around to the northeast of Anchorage and find an airfield we could get into.

But then we had an idea. What about Special VFR into Merrill? I reviewed the rules in my head: we had more than the requisite one mile of visibility, and since it was daylight the fact that we were in VFR-only Super Cubs was not a factor. I also now could see a few breaks in the clouds that might allow us to get underneath the undercast. Finally, Sean and I were both proficient in our Super Cubs and familiar with the area, so we felt like the challenge of legally scud running into Merrill in two slow-flying Super Cubs was something we could handle. I felt like with was worth a shot, aware that ATC might deny the request if there was IFR traffic for Merrill or if their workload was too high.

My Super Cub had a transponder, but Sean’s didn’t, so we decided to stick together instead of splitting apart. Sean tucked up a few wingspans to my right while I called Anchorage Approach to get a squawk code and explain our predicament. The controller issued me a transponder code and then, lucky for us, a Special VFR clearance into the Merrill Field surface area. Now we just had to get down. 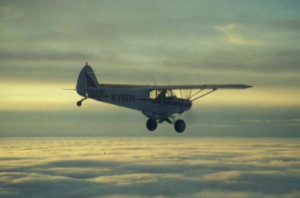 The Super Cub is an incredible airplane, but it’s not known for its IFR equipment.

We continued north along the eastern edge of the Anchorage Class C airspace. About five miles south of Merrill, I saw a hole in the undercast over a prominent shopping center in south Anchorage. We spiraled down through the hole and into the gloom underneath, knowing we could come back up if we didn’t like what we saw. But I could clearly see the four-lane Seward Highway that I knew would lead me straight to Merrill, so we continued north. Sean and I leveled out at 600 feet off the ground, flying directly up the highway towards Merrill.

We thanked the Anchorage controller for the help as he switched us over to the waiting Merrill Tower controller. The winds were calm and the controller cleared us to land straight in on what is now Runway 34. I sure was glad to be back on the ground.

I sometimes sat in the Super Cub for a few minutes after I shut it down, savoring the just-flown flight while the engine cooled down. I’m sure I did that on this day, although I’m also sure my thought process involved more second-guessing than normal. What had gone wrong, and what had gone right? What lessons did I learn?

It’s easy to say “I’ll never fly Special VFR” but I’m not sure what better options we had. The Super Cub had no way to fly an instrument approach; without even an artificial horizon, the thought of entering any kind of cloud under any condition was a terrible idea. We could have kept going to the northeast, and we might have found a VFR airfield before the sun went down. But we might not have, too. Special VFR into my home field in the waning daylight seemed a lot better idea than poking around in the darkening gloom hoping for a miracle.

It’s also easy to say “I should have known” that the clouds might roll in. Anchorage sits right on the water, and the “fog monster” did sometimes roll in. But we checked the TAFs and they all indicated good VMC for the rest of the day. Although weather and aviation are intrinsically connected, and weather knowledge is a good kind of knowledge for a pilot to have, I’m not a weather forecaster. At the end of the day, I have to trust the weather forecasters… I did on this day and I continue to do so.

Finally, one might say that we violated the FAA’s minimum safe altitude rule (FAR 91.119) by flying up a highway at 600 AGL before we entered the Class D surface area. I get it; we should have been at 1000 AGL over that congested area, except that would have put us in IMC. But by that point, we weren’t joyriding—we were in the process of taking off and landing, and we were under the auspices of ATC. So I’ll defend that decision as well. And the FAA never called!

Looking back on this day 20 years later, I’m glad it turned out the way it did. I’m glad Sean and I had the wherewithal to think this one through literally on the fly, and I’m glad we collectively had the knowledge of the FARs that allowed us to request and accept an unplanned Special VFR clearance. I’ve gone on to have many more memorable experiences in Alaska and elsewhere in the past 20 years, and the lessons I learned during those formative years of my aviation career have served me well. Joe Framptom
Joe has been interested in aviation since he was a kid and took his first flying lesson when he was 22. He liked it so much that he joined the Air Force to become a pilot, and spent most of the next 20 years flying a C-130. These days, he can be found in the right seat of a 737 or in the left seat of a Cessna 180, which he's had the great fortune to fly to 41 states. He looks forward to flying it to the other eight that he can comfortably reach!

When things went wrong in a good way