Blog - Latest News
You are here: Home1 / Article Archive2 / Opinion3 / Long range learning: what do we bring from the flight school? 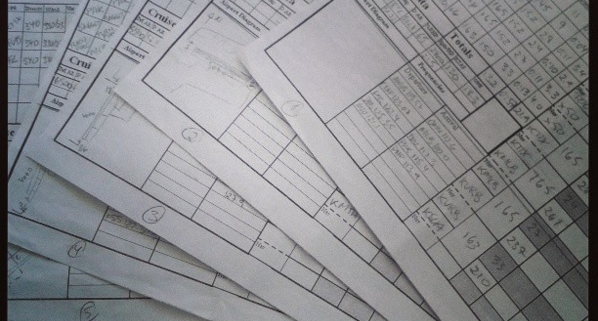 In my time as a student pilot, much slower and lower than I usually fly nowadays, I always wondered how much of that knowledge I was being trained and evaluated on would be applicable to the rest of my career. Just like in high school, when we were being exposed to all those chemistry formulas and math equations and in the end most of us never used them again, I thought something similar could be expected from that very basic Private stuff.

It turns out that, at least when it comes to the operational part of it, we can directly relate many of the student pilot concepts to the airline environment: a good surprise, for sure. 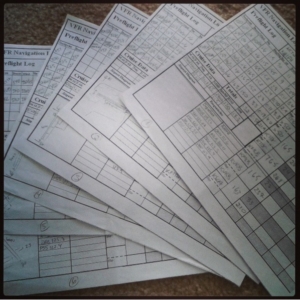 Think all that paperwork will disappear once you’re an airline pilot? Think again.

So, let’s relive those early lessons. One of the first things a student pilot struggles with is staying on the centerline during taxi. It is a skill that takes a while to be learned; we all know how little an airplane respects our wishes during those first hours. It goes without saying that the bigger the wingspan, the more judgmental your taxi has to be. When we get to the point of taxiing airplanes where the horizontal stabilizer is wider than the wings of our first single engine pistons, it is especially important that you know where the centerline is. Believe me, many grown up pilots still don’t, and even more common is for them to miss it for thinking that their aircraft is bigger than it actually is

It is almost certain that if you see an airliner going straight but slightly to the right of the centerline, it is being taxied by the right seat pilot (and before jumping to conclusions, I’ll admit that doing it in the left seat is no less common—even because many smaller airliners can be only taxied from the captain’s seat, which is equipped with a tiller or steering wheel). The oversteering on turns is a whole different animal, and having your nose gear many feet behind you, and your mains many yards more, makes every turn a fun but tricky exercise, especially at small airports and in an airplane with the wingspan of a city block. Many light poles and APUs lose the battle against wingtips every year.

But while the taxi is part of the fun the autopilot has not been able to steal from us yet (Airbus engineers are working on it as we speak), it is during the flight that things get interesting. One of the maneuvers you will meet again during your first type in the airlines is the stall. More specifically, the power-off stall. We will practice every six months, actually, and in a variety of altitudes and configurations. Clean, with approach flaps, and in landing configuration for some syllabi. Also, since the behavior of the airplane is so unfamiliar to most of us in thin air, we also practice the stall at high altitudes; and on this, even more than in the previously mentioned case, losing altitude is a secondary priority. Not getting into a secondary stall is the primary goal.

The recovery technique is very similar: unloading the wings with a nose down push as you also lower your angle of attack—the one to blame—gets you back in the game. The difference from the private, but not so much from the commercial, is that you recover at the pre-stall. We never wait for the stall to fully develop in a 200-ton airplane.

A couple similar maneuvers are the upset recovery and the steep turn, the first more common to be covered in recurrent training than the first—a classic of the ATP checkride. But there is no hood anymore. In a simulator flying IMC is second nature, and sometimes the emphasis is on the mechanics of the maneuver; seeing the horizon or not is irrelevant.

But nothing in the airlines gets closer to those lessons in a Cessna or a Piper than the flight planning and execution. Well, most of the planning—flight dispatch will provide you and your colleague with a briefing package containing all those things you used to search for before your cross-countries, and more. But you are still required to go through all those weather charts and NOTAMs, then carefully pick a magic number for the final fuel figures—this is totally a pilot responsibility. And although you are no longer choosing waypoints and calculating groundspeeds and headings, they will be there as you diligently fill the operational flight plan as the flight progresses, checking every hour or so if your fuel burn is as expected by the flight plan. At least now you’ll be relying on much more accurate fuel tank sensors. 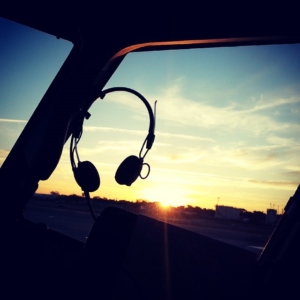 The habits you form as a student pilot will serve you well as a professional.

And even though you are flying a twin-engine aircraft (at least—fewer of us have three or four to care about nowadays), you are still “looking for a field” in case things go… south? A professional crew will always know, at any point of the trip, where they will divert to in case of an emergency, how long it will take them to get there, and what weight and therefore fuel they will have upon landing.

Speaking of weight—and balance—you will learn how to do it in your type, but on a daily basis you will always get it done by dispatchers as well. The big difference to your trainer aircraft, though, is that your maximum landing weight will often be lower than your actual takeoff weight. This brings some serious considerations to your departure briefing, just to start with. In a small airplane, for instance, we brief the passengers. In an airliner, the flight attendants and the entertainment system do it for you. Handy, right? And I almost forgot; you will not be flying solo anymore. Like ever. If that happens, it is an emergency called “pilot incapacitation.” So, you’d better not.

But mark my words: if you are planning to continue your studies toward the objective of becoming an airline pilot, no matter how good the job you get in the future, you will always regard those first months and years of the flight school as the best part of your career. It is where many of your long-lasting friendships—and as we just saw, knowledge—will be forged. Give your post-training worries a break: embrace the sweet present of the low and slow.

From the archives: The Airphibian

The hex of the X
Scroll to top