Blog - Latest News
You are here: Home1 / Article Archive2 / I was there3 / Herding cattle with a century-series fighter

In the mid-70s, the USAF was looking for new airspace to conduct low level/high speed training. Existing routes were being crowded by urban sprawl, victor airways, airport control zones, and a host of other factors that were making the airspace above a smaller place.

The Upper Peninsula (UP) of Michigan had caught someone’s eye in the Pentagon as an area which was still on the edge of the frontier and fertile ground for such usage. For whatever the reason, the National Guard Bureau down the hall was brought into the concept, which in turn passed it off to the Michigan Air National Guard, since it encompassed their airspace.

At the time, I was your basic, “Guard Bum” with the 127th TFW at Selfridge ANGB, seeking a job as an airline pilot when no one was hiring. The unit was flying F-100s at the time and while officially being the Wing Navigation and Life Support Officer, I was essentially the gopher for anything required. With a summons to the five-sided structure in Washington, I was explained the task at hand and informed that I was being given a six month temporary technician position of employment to make it all happen. 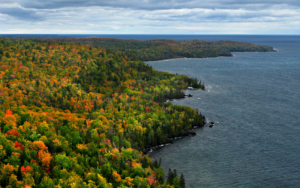 The first task began by sitting down with a sectional chart of the area and drawing a five mile radius around every city, town, and village. Next included schools, airports, radio towers, restricted airspace, state and national parks, and anything else which could be classified as other than a sparsely populated area. With what remained, and there appeared little of it, I attempted to connect a continuous line of dog legs from a start point to a target.

The USAF was seeking two separate routes, which presented a significant challenge. I was never into puzzles, but in short order felt that I was trying to fit a round peg into a square hole. The proposed perameters for usage of 500 feet AGL and 420 knots groundspeed were but window dressing for the real intended usage of 200 feet, “on the deck” ops.

After finally eking out two separate corridors in reverse directions, the proposal required an in depth assessment of the noise levels emitted from the various fighter aircraft that would be flying the route, as well as the pollutants emitted at subsequent power levels necessary to sustain the intended 420-knot airspeed. Totally out of my element, I leaned heavily upon the engineers at Wright-Patterson AFB for the necessary data to fill this square.

An in depth and realistic description of the area could only be achieved by flying over it and unlike the assigned tasking of the unit, this was a blank check to go survey the real estate as necessary. Given an F-100D for this purpose and without a wingman, I was alone and unarmed. The flight plan which I filed gave specifics to time en route and fuel aboard but routing as vague as, “VFR, Upper Peninsula, Michigan.” The only semblance of official USAF business was a planned refueling at KI Sawyer, which was a SAC base and prior permission required. In peacetime, flying did not get any better than this, even if you flew “reconnaissance!”

It was a perfect day for sight-seeing and after passing over the thumb of Michigan, I cancelled IFR with Cleveland Center and let down to basic clearance, over Lake Huron towards the eastern tip of the UP. Time and distance was critical at this point as navigation was solely by dead reckoning and the first turn point of the route was located just west of the Canadian Border. This was during the height of the Cold War and in the days before the magic of GPS and moving map display. By pure chance, a Russian freighter (trading with Canada) was steaming near parallel to my track and I more or less passed beneath their starboard bridge wing, to show the flag.

Nearing the northern shore, I pulled up to a respectable altitude (clearance) and commenced to fly contour while I thundered over the pencil line that had been drawn on the chart. Although it was considered early spring in most parts of the US, here the area appeared still gripped by winter with a significant absence of humanity—the sole reason for me being here. 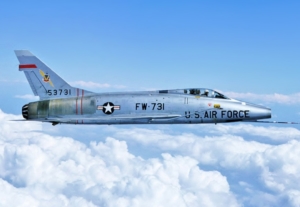 After spending better than a week afterwards writing a travelogue, in military form, it was time for the last and most critical hurdle: a joint meeting with US Fish & Wildlife and the Michigan Department of Natural Resources. It was a foregone conclusion that there was nothing about my presentation they would be enthusiastic about. Should I be able to come away without their protest, I could consider my visit a major victory.

After initial pleasantries, I was immediately questioned on my knowledge of the Kirtland Warbler, a small bird on the endangered species list which seasonally commutes between Northern Michigan and the Bahamas. Being environmentalists however, they referred to the bird by its Latin grammatical name of setophaga kirtandlii, which was something totally foreign to my vocabulary. While in their eyes, I now appeared dumber than mud, there was no doubt in my mind that I was attempting to communicate with Klingons.

There was great concern on their part, of the potential for creating a stampeding effect upon wildlife by the transit of a jet fighter at the proposed altitude and noise level. I countered that while initially startling to both man and beast, it was extremely brief as an event and similar to that of a thunderclap. While sudden in occurrence, its duration ceased as quickly as it was recognized.

After but a brief glance at my artist grade chart presentation, a problem was immediately voiced regarding the second leg of the route. A known bald eagles’ nest was located within three miles of the drawn centerline. Proceeding to the map room, which reminded me of a high school gymnasium, we walked over to charts of the UP in stocking feet, which represented a scale of nearly one to one. As if the epicenter of an earthquake, the location of subject nest was readily located and graphically displayed with various data depicted about it as if a Surface to Air Missile site.

“We had an active nest here last summer,” I was informed. “With three eaglets!”

I was aware that I had a high frequency hearing loss from being around jet aircraft, but rather than having missed something, I was suddenly doubtful of what I had just heard. “Three eaglets,” I questioned, disbelieving that such a census occurred. “How are you aware of that?”

“Oh, we go out and count them every year,” was the casual response, as if it should be obvious.

“Really?” I responded, hesitant to believe that such scrutiny occurred on an annual basis and that they had nothing better to do with themselves. “Isn’t that rather dangerous—climbing up into the upper branches of a tree and being attacked by a mother eagle in the process?” I further questioned.

“Oh no… we use a helicopter to count them.”

It was at this point that I boiled over and lost all restraint of being humble and calling upon these gentlemen with hat in hand. Here these guys were having an issue with the noise created from a jet aircraft a mile or two distant from such nesting, being there and gone before recognition of what had occurred, and they were out hovering about the canopy of a forest counting beaks in a nest while maneuvering about and creating downdrafts of over 80 knots in the process. If ever there were a man-made event to induce a miscarriage in everything from bears to birds, this was it. 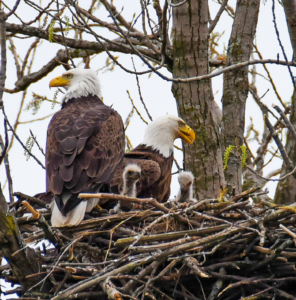 Don’t mess with the bald eagle.

Having vented my spleen regarding their concept of accounting, I was near certain with my departure that the entire project would now have to be scrapped. The odds of approval from this camp were less than trying to mix oil with water, or communism with capitalism.

Surprisingly a month later, the DNR and Fish & Wildlife responded with a neutral response, voicing no objection to the proposal. Before final submission to USAF HQ for approval and subsequent publishing with the FAA however, the two routes would require a flight check being flown as a practice tactical sortie, to confirm its outlined perimeters.

Once again, I was handed the keys to an aircraft with no questions being asked for the purpose of making it all happen. Shortly after takeoff, I cancelled IFR and proceeded by visual pilotage to the start point of the first route at the northern tip of the thumb of Michigan. Shortly thereafter, I happen to glance over the canopy rail and observe an entire section of land which was fenced and being used for grazing by what I estimated to be over 500 head of cattle.

To put to rest the skepticism regarding the stampeding of animals by jet noise, I decided to put the matter to the test. Yanking the plane around for alignment, I dropped down to 200 feet (or somewhere in that vicinity) and pushed up the power for a passage over the field at 400+ knots while engaging the afterburner for added effect. As the ground streaked by in a blur, I abruptly pulled up into the vertical at the far end of the fence line and initiated a barrel roll. Tilting my head back over my left shoulder, I glanced back to where I had just been.

The sight I observed reminded me of an old time western movie with a mass of buffaloes charging across an open plain. Already a small trail of dust was distinguishable behind what appeared to be the entire herd, hell bent on going someplace en mass and in minimal time. The initial thought of this entire horde breaching a barbed wire fence on the run left me with the vision of having to eat bison hamburger for the rest of my life as the result of damages incurred.

I dreaded the thought of what awaited me upon landing throughout the remainder of the flight. The camouflaged paint scheme of the plane lacked sufficient stealth to hide the perpetrator, and being the sole aircraft flying from the squadron that afternoon left no chance of claiming innocence. I fully expected to be met at the aircraft by the wing commander upon landing and stripped of my wings.

After stop cocking the throttle in the chocks and sheepishly entering flight operations, I waited for the hammer to fall… which mysteriously never occurred. Apparently the cattle were not so dumb as to impale themselves upon a barbed wire fence no matter what the fright—be it from predators, lightning strikes, helicopters, or an F-100 pilot laying siege to the area. Roland Schultz
Roland is a retired international airline captain with over 32,000 hours total time. He is an ATP Airplane Single Engine Land, Multi-Engine Land & Sea, and is type-rated on the A320, A330, CV240, CV340, CV440, DC-9, and G-111 (Grumman Albatross). He also holds a Commercial certificate for Airplane Single Engine Sea, Glider, Rotorcraft Helicopter, and is both a flight instructor and A&P mechanic. He flies a 2/3rd scale Macchi M-5 flying boat.

Every pilot a tiger