Blog - Latest News
You are here: Home1 / Article Archive2 / I was there3 / Every pilot a tiger

Tigers are fierce hunters who won’t back down from challenges. During my 22-year Air Force career, each squadron to which I belonged wanted every pilot in the unit to be a “Tiger.” When I was awarded my wings in May of 1972, I wondered how I would be tested to determine if I was one.

Shortly after pinning on my wings, I was on my way to Southeast Asia as a Forward Air Controller (FAC) flying the North American Rockwell OV-10 Bronco. FACs flew their lightly armed aircraft day and night at low altitude in every sort of weather, and also served in the field with US ground forces. They probed targets, directed airstrikes to support embattled US and Allied ground units, interdicted enemy infiltration routes, and coordinated rescue operations for downed airmen. Using smoke rockets and smoke grenades to mark targets, FACs controlled airstrikes, naval gunfire, and artillery fire against enemy positions. Fighter aircraft knew where to drop their weapons when they heard a FAC’s trademark radio call directing them to, “HIT MY SMOKE!”

Given that job description and having a little over 300 hours in my logbook, I reasoned that as a 22-year-old 2nd lieutenant flying FAC missions solo, I was a Tiger. However, I still wondered how someone would know, beyond a reasonable doubt, that I was indeed the Tiger I supposed I was. One day, I got my answer. 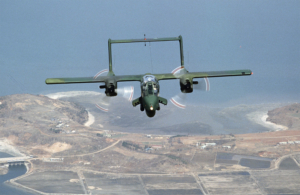 The OV-10 is not known as a famous dogfighter.

I was over southern Cambodia one summer afternoon when it was time to RTB (return to base); I was both “Winchester” (out of smoke rockets) and “Bingo” (enough gas to get home safely). I told the EC-130 serving as a tactical airborne command post that I was “RTBing” and would “fence out” with them once I got to Thailand, i.e., let them know I had crossed the fence from hostile into friendly territory. They acknowledged my call as I climbed to a comfortable 10,000 ft. MSL, where the tropical air was cooler (the OV-10 cockpit was unpressurized and not air-conditioned). This put me above most of the mayhem of combat operations, which was see and be seen operations—no radar coverage and no ATC, which meant I had to watch for fighter aircraft passing through my altitude as they attacked targets.

While climbing, I tuned the HF radio (we had five radios) to those frequencies where I could hear the news or listen to some music. The BBC was good for news and Radio Australia usually played recent hits. As usual, I had one of my two VHF/FM radios tuned to our squadron frequency, referred to as “Nail Common.” Our squadron used Nail callsigns on our missions—mine was Nail 49—Nail Common helped keep us abreast of where our fellow FACs were and what they were doing.

After leveling off, I copied the mission notes I had scribbled with a grease-pencil on the right-hand canopy onto index cards on my kneeboard. These notes included information about the airstrikes I had controlled that day including the fighters’ callsigns and their type aircraft as well as the weapons they had employed, when, where, and what type targets we struck, and the results of the attacks. I would pass this information to the debriefers after landing; it would then be classified as it became a part of the order of battle to be briefed to those flying future missions. Once I had all the information transcribed, I used the back of my Nomex flight glove to clean the canopy to the best of my ability. The crew chief would complete the task after I landed, but I wanted to give him a head-start.

I was following the Mekong River, knowing nobody would be dropping bombs there, when I spotted another OV-10 about two miles away. He was in my 11 o’clock position, about 1000 feet below me, and headed in the opposite direction. As I watched him, I saw him rock his wings, signaling that he saw me. I rocked my wings to let him know that I saw him as well. I continued watching him and, as we passed with maybe 1500 feet of lateral separation, he started a climbing turn towards me.

I quickly surmised that, as Shakespeare put it, “the game was afoot!” This fellow FAC was going to try and get on my tail and I had to do whatever was necessary to keep that from happening. I shoved my control levers into takeoff and land, putting my twin turboprop engines at max RPM while my throttles would control the pitch of the blades. I turned into him and we were quickly in what is called a “furball.”

As we yanked and banked, my entry into the fight from above quickly put my opponent at a disadvantage. Additionally, his 230-gallon external centerline fuel tank was nearly full and he had a full complement of smoke rockets while I was lighter since I was Winchester and Bingo. I soon had this bandit in my gunsight and that’s when I keyed the microphone on Nail Common and broadcast, “Tak! Tak! Tak! Tak! Tak!” Immediately, the rogue OV-10 rolled into a steep nosedive and started trailing smoke.

Rest easy—I didn’t shoot him down. In the OV-10’s left main gear well there’s a reservoir holding oil or hydraulic fluid and, on the gunsight in front of the pilot, is a toggle switch. Pushing that switch up activates a pump drawing fluid from the reservoir and injecting it into the exhaust of the left engine–think of the Thunderbirds and Blue Angels trailing smoke so their audiences can follow them through their maneuvers. FACs used the smoke trail to help rendezvous with fighters over the jungle; the smoke highlighted us against the jungle, making us easier to spot. 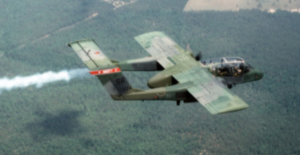 As my opponent recovered from his dive, I turned and continued homeward. I landed and debriefed my mission at Intel and then went to the squadron to see who was flying that afternoon, making a mental note of their names. Since I had flown two missions that day, I went to the Officer’s Club for an early dinner. After eating, I stopped in the bar to see who was there and, as usual, those with the day’s late takeoffs were relaxing with an adult beverage before they too had dinner.

I began asking each of them, “Were you about 10 miles southeast of Papa-Papa (Phnom Penh, the capital of Cambodia) around 2 o’clock today?” I kept getting negative replies until I had asked all those who were airborne that afternoon, with the exception of one pilot who was standing at the bar. There was a good reason I hadn’t approached that last pilot: it was Nail 01, my squadron commander. I wrestled with my conscience for a few minutes and then screwed up my courage and approached him.

You have to understand, my commander was a big, imposing man. He had been a 17-year-old enlisted sailor on the USS Iowa during WWII, serving as what they called a deck ape. Deck apes hauled ammo across the deck to resupply the antiaircraft guns fighting off the kamikaze attacks during the Battle of Okinawa. After the war, he played tight end on the University of Alabama football team. As I said, he was a big, intimidating man.

As I approached, he turned to face me and said, “Good evening, Nail 49.” I guessed he had been watching me in the mirror hanging behind the bar. I returned his greeting and figured he was anticipating me questioning him as I had the other pilots in the bar.

I choked out my question once again, and he replied, “Yes, I was.” I swallowed hard and then asked if he had spotted another OV-10 approaching him nearly head-on. He answered in the affirmative once again and added, “Why do you ask?” I then fell back on the pilot technique of using my hands to demonstrate what I was talking about as I asked, “Did you make a climbing turn toward that other OV-10?”

He answered, “Yes, that was me.” I was dumbfounded, knowing I was probably going to be court-martialed or shot at dawn. However, he broke into a wide grin and asked, “Did you like when I rolled over and turned on my smoke to make you think you had shot me down?” I nearly fell over as I realized I had been tested by the old man himself and was now known by him to be a Tiger! He extended his hand and said, “Well done, Nail 49! Let me buy you a beer.”

When I was the old man commanding an F-16 squadron, I had the opportunity to see if my pilots were also Tigers. Those are stories for another day.

A 12-minute flight and a serious in-flight fire

Herding cattle with a century-series fighter
Scroll to top