Blog - Latest News
You are here: Home1 / Article Archive2 / Opinion3 / Where have all the pilots gone? 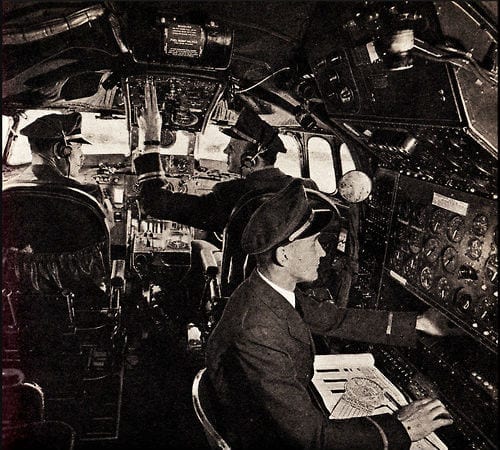 I have noticed the aviation industry is once again experiencing another pilot shortage. So, let’s take a little trip back in time and see how we keep getting in to these so called “shortages.”

A long time ago—when dinosaurs ruled the earth, beer was only a nickel, and I had no gray hair—the airlines were regulated and all was well upon the land. Air carriers, or 121 operators, owned three things: the aircraft they used, the facilities they operated out of, and most importantly the routes they operated on. In the 1930s the federal government worked to develop and promote aviation by awarding profitable routes in exchange of providing service to remote and less profitable areas.

No, I did not forget the pay. For a captain flying at night on an international flight, the salary was as much as God. Everyone wanted to be an airline pilot.

What could possibly happen to upset this strong well-run industry? 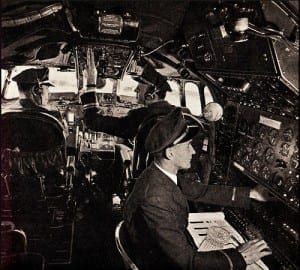 There was a time when airline captains were treated—and paid—like God.

The first announcement of the alleged pilot shortage was that the pilots from WWII would soon be reaching the then-mandatory retirement age of 60. This led to a stampede of student hopefuls to the nearest flight school and more flight schools appeared across the land. The Vietnam war was ending and military pilots concluded that flying from LAX was much better than flying out of Da Nang, so they also headed for the airlines. (Of course, as luck would have it, the shortage was temporarily offset as the retirement age was changed to 65 in 2007.)

The requirements to join one of the major airlines as a pilot suddenly became insurmountable from the competition of experienced and not so experienced pilots. After reaching all required FAA pilot ratings and having all the required flight time (see previous story), there was always one thing that was needed but you did not have.

Unlike today’s aircraft today’s airliners, such as the Boeing 737 and Airbus, many older airplanes required a “professional plumber,” i.e., a flight engineer. It was the unspoken requirement to obtaining a position as a flight crew. However, after passing the required written exams, one found the cost of taking the flight test to be rather expensive (you usually had to take the practical exam in a 727)… more expensive than some wanted to pay for the risk of maybe being hired.

Unfortunately, a plague soon infected the airlines. Something called deregulation appeared to end the shortage and then caused a surplus of flight crews.

This deregulation caused competition, which it was designed to do. The competition, which most airlines had never had to experience, caused several to simply disappear. Pan Am was out of business before they realized what was happing, followed by Eastern and National. As a side note, every airline I ever to applied to except Delta no longer exists.

Air carriers no longer had to service the less profitable routes, which they abandoned, so they retreated to what is called the hub system. This allows efficient use of aircraft along profitable routes. If you don’t live close to one of the hubs, well there were “feeder” carriers, AKA regionals, to provide air transport to the hub of your choice. These feeders paid nowhere near the major air carriers and there was no real progression to the major carriers. Flying as a passenger in one of the “feeder” carriers was not the comfortable ride one was accustomed to experiencing. Usually it was a small twin engine turboprop (lovingly referred to as an executive mailing tube) with no service, and “pack your own lunch” did not go over well with the seasoned traveler. This caused a turnover of flight crew and passengers alike.

The hub system is also the reason that when you die, you will have to go through Atlanta.

This caused what are called furloughs in the airlines. That means you are no longer working and are no longer getting paid. Which I suspect sounds a lot better that being fired. 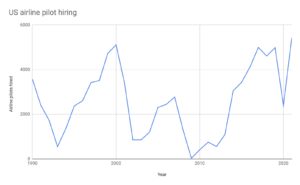 Then came a second rallying call to arms of another pilot shortage. This dire warning appeared in the September 1989 issue of Aviation Week and Space Technology (known in the aerospace trade as “aviation leaks and space follies”). Same story as before: pilots reaching retirement, no military to fill the crew station, no engineers and technical support, same story. As you might suspect, I could not let this pass and responded to the article with a letter to the editor (AW&ST, September 11, 1989 – page 146):

I have followed with amusement your articles on the “pilot shortage” the air carrier industry is now experiencing. There is no pilot shortage. We are right here working in other industries that are less glamorous but pay good salaries. We are no longer interested in pursuing costly degrees or ratings for a questionable position in an unstable market. These positions no longer pay as well as they once did. I personally could not afford the cut in salary to start as a pilot for a major, and I certainly will not attach the now-required $25 nonrefundable administration fee for an application.

Your problem gentlemen is we are no longer willing to outlay the time and money for a minimal return as a flight officer. A similar outlay in other professional fields has a much larger financial reward. If you find this letter somewhat harsh, cold, and mercenary, you are correct. Welcome to the real world.

Yes, to apply for a position as a flight crew officer, you attached a check for $25.

On arriving home from work after the magazine hit the readership, I looked at my telephone answering machine. It displayed 35 calls received. All contained the same relative message, indicating my position was correct on the working environment and pay scale. Other supportive comments were not G-rated.

Oh yes, the pay scale. I neglected to say at this time that the major air carriers instituted what was called “the B Scale.” Simply put, you would not be receiving the previous pay scale new hires had received in the past and you would never receive any thing close to what senior captains were receiving.

So where are we now?

The next generation of young men and women who thought they might be inclined to aviation bypassed flight training all together. They can enjoy the almost fun of flight by obtaining the latest video game and skip the expensive flight training. They could fly a fighter be a navy pilot at Midway in WWII or fly a TIE fighter against the rebels.

The latest savior was the coming of the fractional charter companies, which hired the over-65 crowd, and newer pilots who obtain the new Second in Command rating as an entry into an aviation career. They found it to be a more stable and financially rewarding work environment. The sale increases of business jets also added to the employment drain of pilots available to air carriers. Their owners enjoyed corporate aviation by not having to mix with the public in today’s high-density cattle cars.

This uneasy stability continued through the 90s and in to the 2000s, until the pandemic arrived, causing airline shutdowns and furloughs which flooded the pilot community. 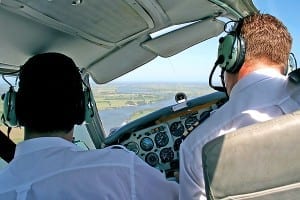 A new generation has flooded flight schools over the last few years—will this time be different?

During and just before, lots of young men and women opted for flight training and entered the roles of the flight instructor—not as many as before but some, as the cost of flight training went from prohibitive to insane. This limited their progression towards higher ratings.

The answer to cost reduction in flight training and to attract new pilots and students is the advent of electric flight training aircraft. That may sound like a good idea, except for the six-figure cost of purchasing one. I am still unsure just how that was supposed to help. Most likely we are going to see the venerable Cessnas and Pipers around for a very long time.

Enter STEM (science, technology, engineering, and mathematics) and the federal government. AOPA has addressed this problem by introducing STEM couched in aviation technology to high school and younger students. This allowed them to see that science is not some head-numbing subject previously taught in school. Their efforts appear to be well received. We will hopefully soon to see more young men and women hanging around the airports and attending the Young Eagles introductory flights offered at many airports around the country.

The House Committee on Transportation and Infrastructure has approved The National Center for the Advancement of Aviation (NCAA) Act (HR 3482). The bill would create the NCAA and would work to guide people to careers in aviation. Their goal is to bring the industry together to address workforce shortages by shaping a generation of new pilots, aerospace engineers, UAV systems operators, and maintenance techs. I am not sure how all this would work, but I for one sincerely hope it solves the problem of boom and bust in the pilot community.

OK, so where have all the pilots gone?

Lots of pilots simply moved into engineering, retired, or ran flight schools. Several pilot friends I know left the military and worked in various field as far removed for aviation as one could get, later buying their favorite warbird, building their own experimental aircraft or spam-can to enjoy the pleasures of flight.

It’s obvious that the aviation marketplace has changed dramatically. The cost to enter professionally is restrictive. Some of those learning to fly have opted for sport pilot ratings and light sport aircraft with no desire to take it up as a career. Another group is composed of foreign nationals who will be employed by their countries’ airlines and who sent them to the US for training. The remaining few are the ones who are truly dedicated to achieving their dream and I sincerely hope they reach their career goals with the more that fair compensation they deserve.

Now if the marketplace can just get itself under control, this story will have a happy ending.

California to Oshkosh in a 1941 Stearman