Blog - Latest News
You are here: Home1 / Article Archive2 / Opinion3 / The only flight time that counts 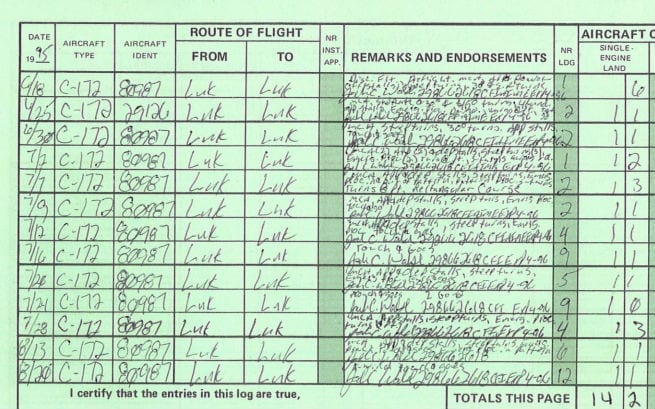 Pilots are always judged by their flight time. It is erroneously concluded that the pilot with the most flight time is the best, most experienced, safest, and so on. Pilots with lower hours want more. Pilots with an equal number of flight hours will value hours differently, i.e., cross country, actual instrument, pilot in command. Pilot in command sounds impressive, until one realizes that most aircraft only require one pilot.

Air carriers, that is to say people in the business of flying, also define flight time differently. I once applied to PSA, whose application had a space for helicopter flight time and yet PSA had no helicopters of course. This time was subtracted from the total number of flight hours, so this form produced a negative number of hours for some of our brethren. I have no idea how to log negative flight hours. 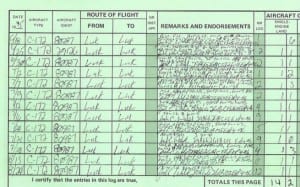 Not all flight time is equal.

“Well son,” the chief pilot would say, “What are your qualifications to be a pilot for this airline?”

“Well sir, I have been in aviation for two years and, by your standards, I have accumulated 1500 hours in the negative. I expect to have no flight time at all by this time next year.”

Local environments produce interesting flying hours, especially if other pilots are not likely to obtain the “correct” time a local pilot may enjoy. I was informed that I could never obtain true pilot-hood until I had logged the following.

Over water flying time, which is flying over water. Note, if you will, the actual size of the water one is flying over is never actually defined. FAR 91.509 defines “overwater operations” as flight more than 50 nautical miles from the nearest shore, and states you must have flotation gear if you’re a large turbine powered airplane. If you’re not, best to have your rubber ducky handy so you can be around to log it if you are 49 miles out and need to swim for it.

Mountain time or flying over lumpy ground. Notice that we do log flight time over flat lands, hills, lakes, cows, or swimming pools (does that count as over water time?) How about desert flight time (defined as the absence of water I would assume)?

Night time, which is defined as a flight that occurs between one hour after sunset and one hour before sunrise (at least this is the definition for when you need to be night current to carry passengers). As for what is logged during those two hours, it is not defined. Curious that we do not log daytime separately, is it not?

Well maybe not. The Brits, God bless them, log their flight time and the time it occurred (in Zulu time), so their time only counts when it is logged in local time in England, not where the flight occurred.

What about those requirements for FAR 61.57, recent flight experience?

Sorry. While 61.57 states you must have made the required three takeoffs and landings within the preceding 90 days, Part 61 talks about the landings, not the flight time. Having said that, I suggest you log it. It’s one of those things that will serve you well during the court-martial (and don’t forget FAR 61.51 (a) (2) either).

The types of flight time go on…

Multi-engine flight time, which is defined as an airplane with more than one engine or a many motors airplane. The actual total number of engines is never really defined. Having said that, it usually comes as a surprise to military types who fly multi-engine fighters that where or how the engines are mounted on the airplane does matter to the FAA. Most fighters have the engines mounted close to each other along the center of the airframe, called centerline thrust.

When obtaining a FAA pilot certificate, their rating reads multi-engine land, centerline thrust. A checkride with an examiner is required to have that removed. The only two civilian multi-engine centerline thrust airplanes I know of are the Cessna 336 and 337. There is a warbird out there called the Casa Saeta or HA-200, but otherwise this is not much of a section.

No engine flight time is of course a glider, or a sailplane to the purest in the glider pilot community. Which is different than “powered” time and logged differently. 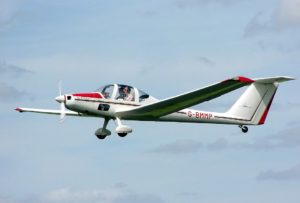 Is it a glider or an airplane?

No engine flight time is defined by not only how long you stayed up, but the number of times you tried to stay up without benefit of a powerplant. This attempt is called a “flight.” Some glider pilots define a flight as when you make a complete, 360-degree turn. So, if you went straight out from the airport—excuse me, glider port—4000 miles and never turned on a cross-country journey that lasted 200 hours you would not have completed a flight.

There in the corner of the hangar, taking no notice of any of this is a Grob G109. For those of you not familiar with the aircraft, it is a self-launching glider or, if you will, a glider capable of launching itself. Normally, a glider is towed into the air by another aircraft, called a tug, then released. Not so with the 109. So, you would think the glider is a single engine airplane.

Go stick that in your logbook.

Logging cross-country time: here we enter dangerous waters. What qualifies as cross-country time? Like most answers in aviation, it depends. What part of the Federal Aviation Regulations are you flying under? If you’re logging time under Part 61 to obtain a new or higher pilot rating, it is defined from Student Pilot all the way up to Airline Transport Pilot. Operating under Part 91, there is no definition of what or how long cross-country flight should be. So you may log cross-country time on you next local $100 hamburger flight.

Flight time logged somewhere it should not be. Reviewing my airframe logbook on my 1939 Aeronca, I discovered the previous owner had logged his flight time in the airframe logbook along with maintenance records of repairs to the airframe. I asked several IAs and the local FAA offices about this; the consensus was it’s not illegal, just strange.

While at Rockwell’s space division, working on the Space Shuttle program, I got to know several very experienced test and research pilots. I brought this question of flight time to Jim and Tom, two of these pilots. While I had more total hours than either of them, they had more burner time than I did. Burner time is flight time in an aircraft (jet aircraft), as you might have guessed, with afterburners on.

Jim was a fighter jock and a test pilot. Tom describes himself as a research pilot, as opposed to a regular test pilot. Both gentlemen have flown aircraft that are still classified, even after the programs closed many years ago. Tom is the only pilot I ever met that whose logbook is classified.

Jim’s comment was his usual 20-year-old fighter jock he was 70 years ago. “Stagg,” he said, “I know exactly what you mean. Those tri-focal captains I would check out in the heavy Convair 990s had one experience 5000 or 10,000 times, not 5000 or 10,000 separate experiences. The old farts would get lost on the walk-around inspection. That is why the flight engineer does it. As for all this night, day, overwater, over mountain or desert time—it’s all bull. An airplane does not know what it’s flying over. You cannot judge a pilot by ink stains in some logbook. They’re just a pack of lies anyway.”

“Look!” he stated, and pointed his finger at me to emphasize the point, “The only flight time that counts is Straight up and straight down.”

Continuing further investigations into flight time and what it means, if anything, I posed the question to Tom. While Jim’s position was clear, Tom presented quite a different perspective. After careful thought, he responded that he had more flight time in monuments than anyone in the world.

“The majority of aircraft I have flown as a research or test pilot are now permanently enshrined in or around various Air Force installations, bases, playgrounds, and museums, as monuments or gate guards of one kind or another. And as I have flown those aircraft more than anyone else, and in fact they are actual monuments, it follows that I have more flight time in monuments than anyone… At least anyone I know.”

Go or No Go: VFR ahead of a cold front
Scroll to top