It’s Monday morning, so it’s time for work. This week that means (hopefully) a one hour and ten minute flight in your Cessna 172 from your home in Greenville, South Carolina (GSP), to your satellite office location in Danville, Virginia (DAN). You’re current in the airplane and you’ve flown this route many times before, but you are not instrument rated so the trip will have to be VFR. Proposed departure time is 1430Z. Read the weather briefing below and then decide whether it’s a go or a no go.

Today’s flight definitely isn’t a slam dunk, as a quick look at ForeFlight proves. While the view out the window is good, the radar shows a big line or rain headed your way. 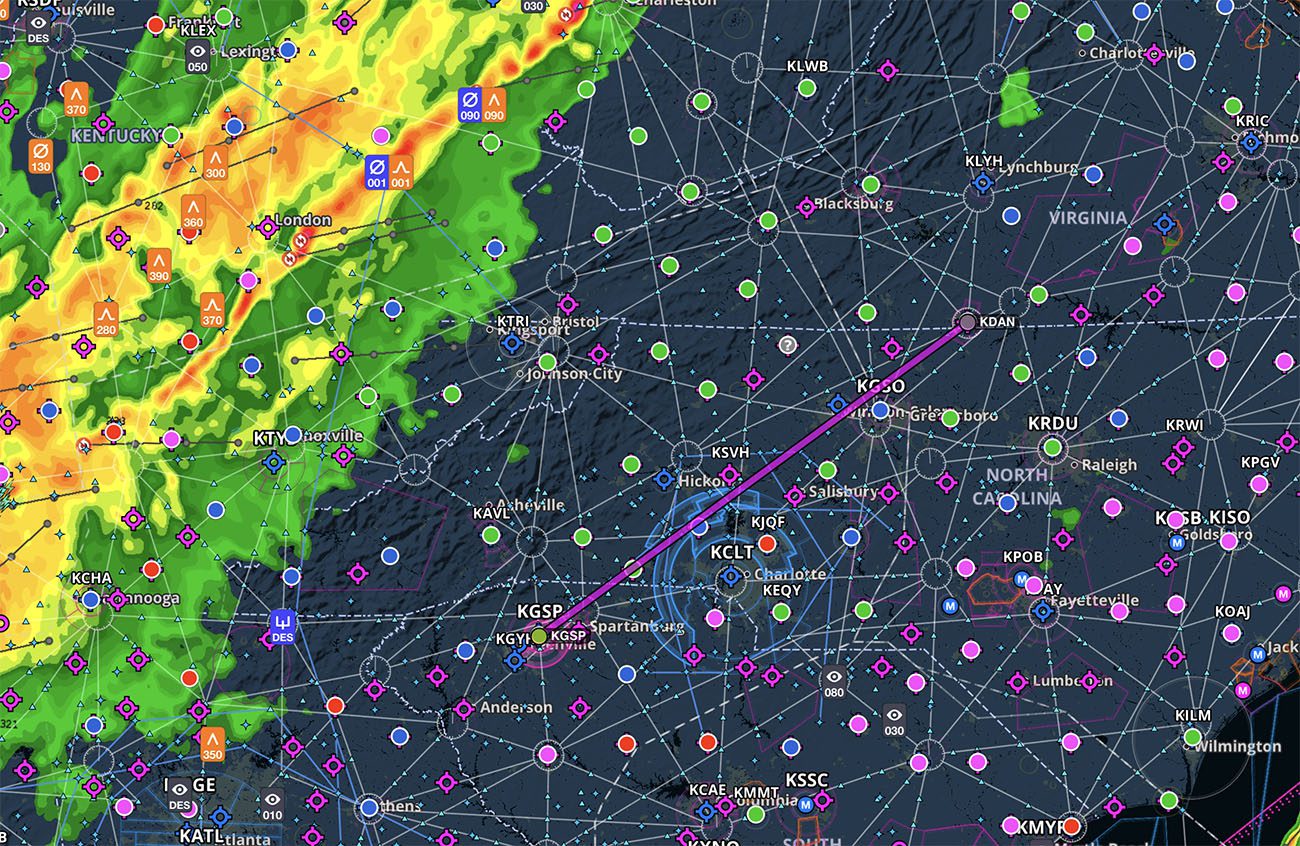 The surface analysis shows exactly what you would expect: a pretty strong winter cold front moving in from the west. 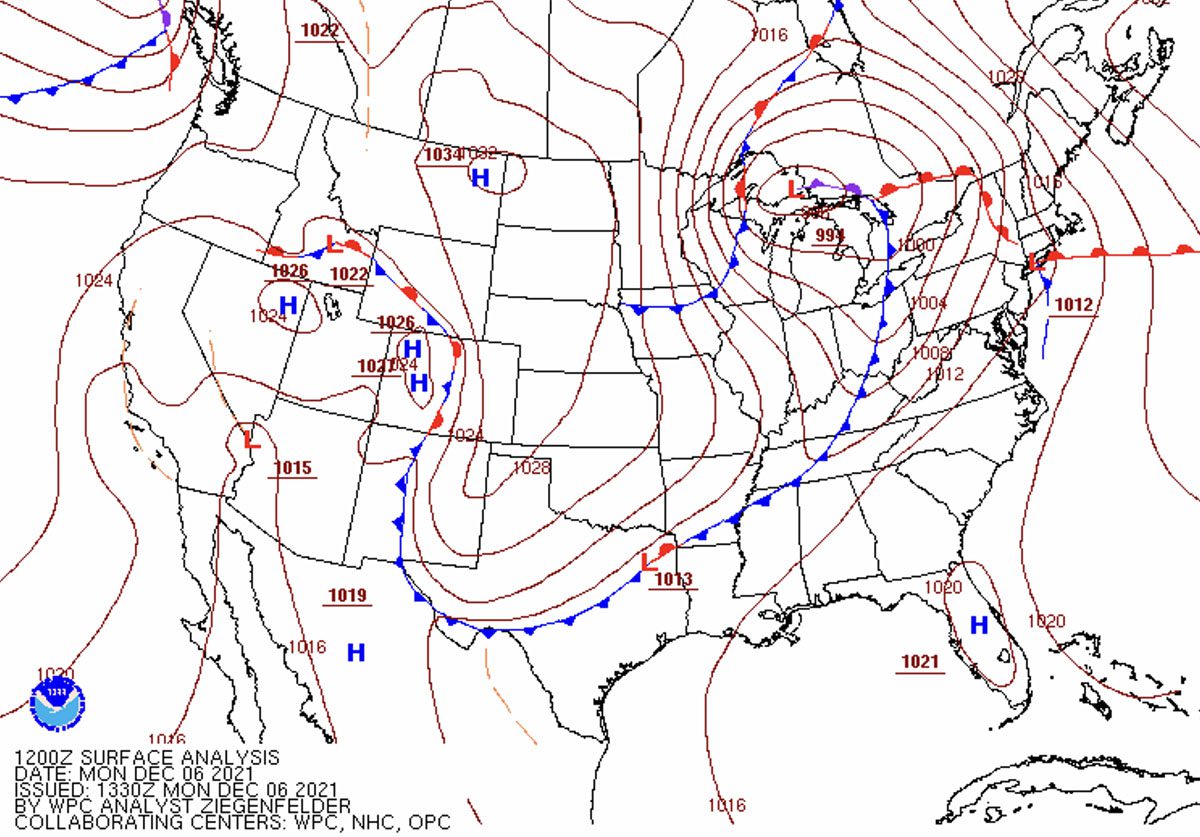 The prog chart shows it steadily moving into the Carolinas, but perhaps not until later in the day. 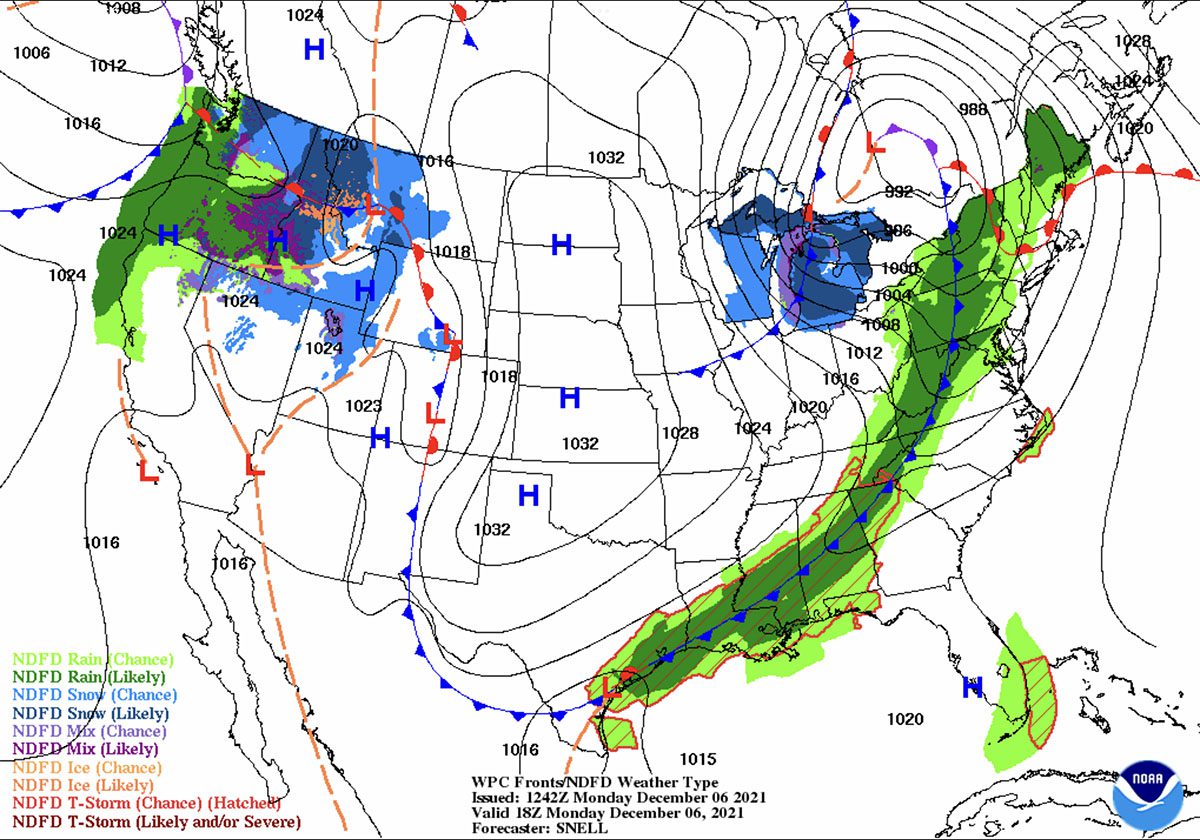 It’s time to dive into the details a bit more. To start, you look at the regional NEXRAD. It shows a solid line of rain along that front, but on your route of flight it’s wide open. 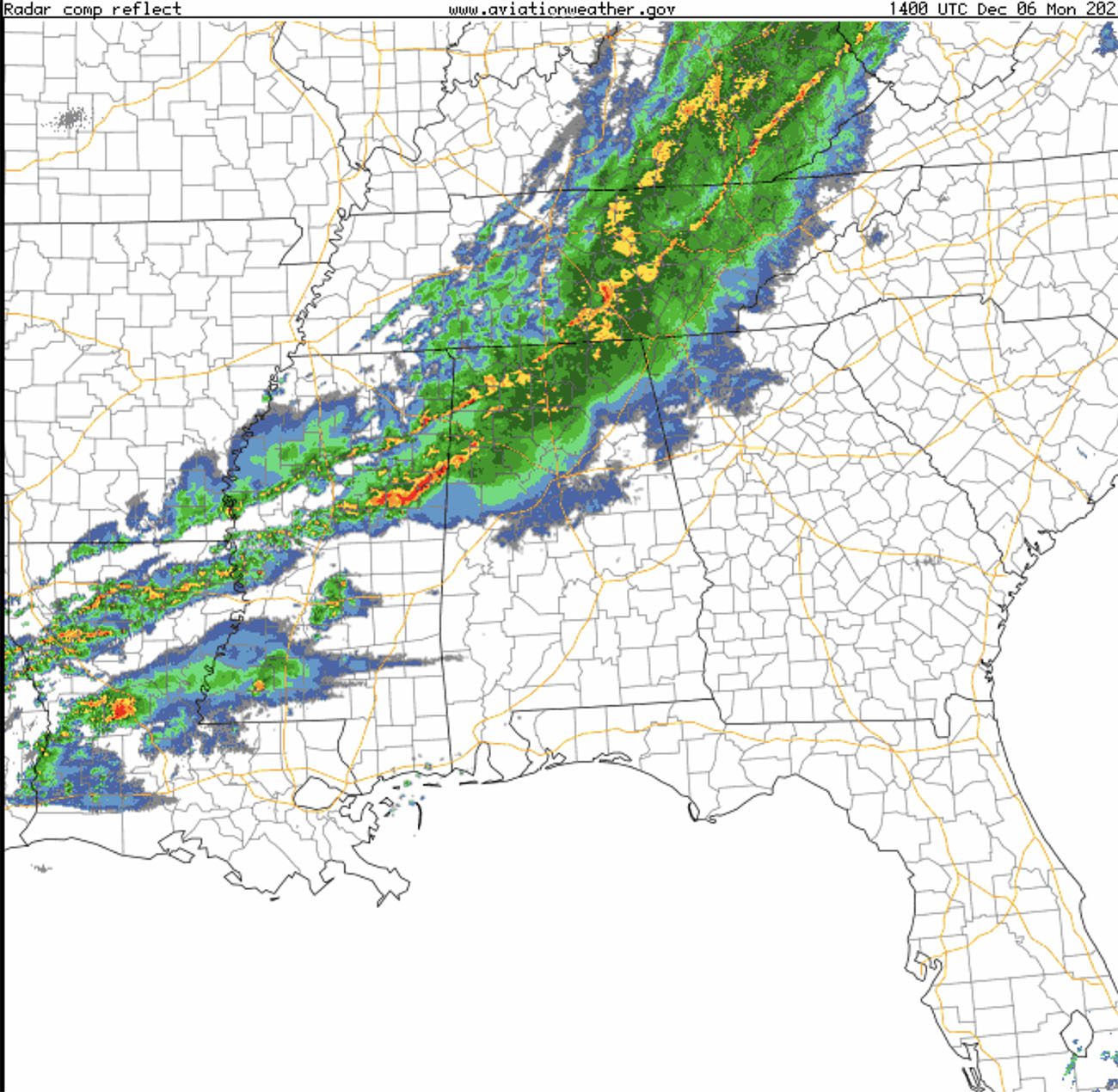 The infrared satellite shows a similar story: thick clouds along the front but nothing through central North Carolina. There are a few clouds off to the east, though. 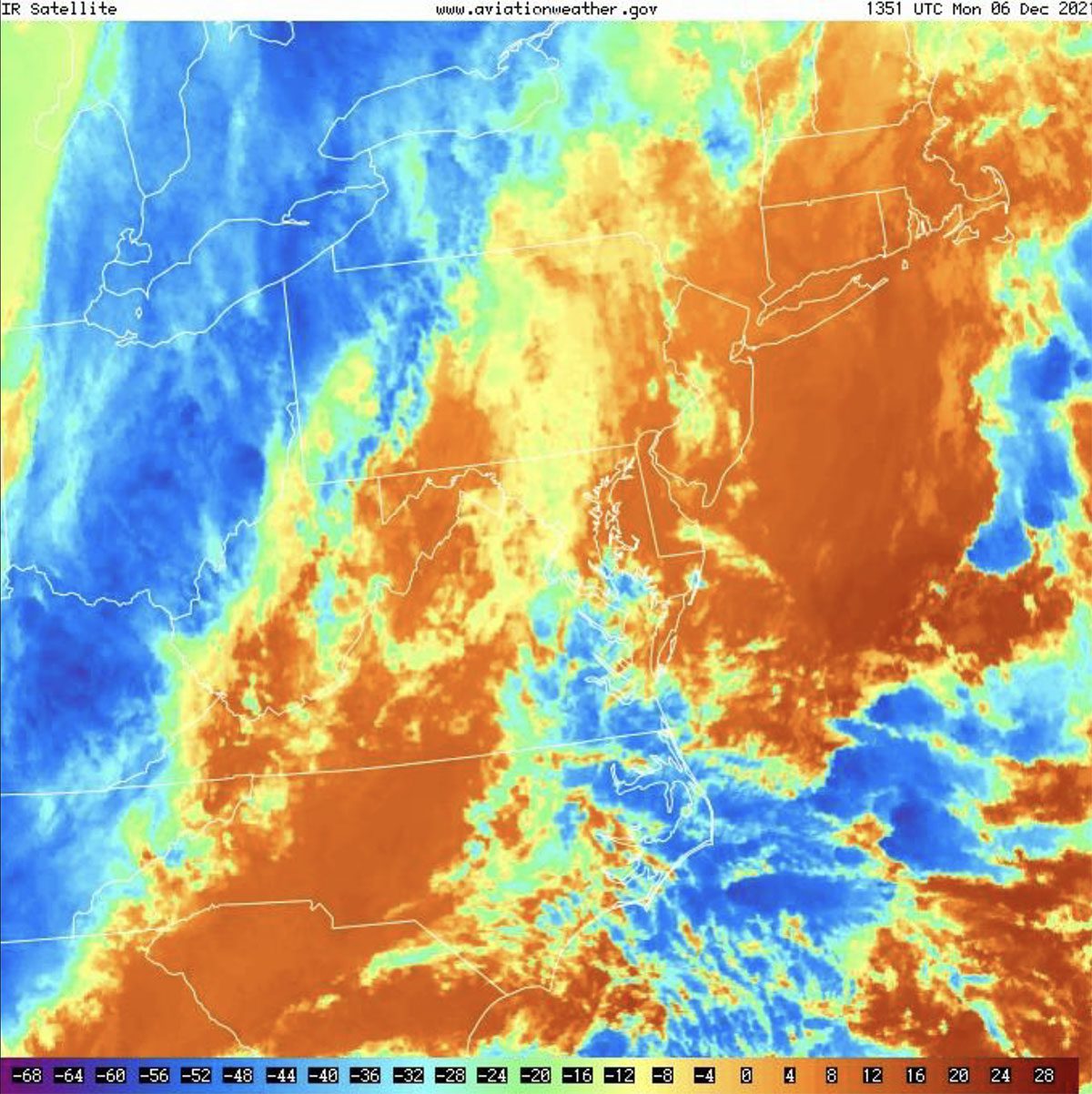 And the visible satellite image, just now available with the rising sun, similarly shows a large gap along your route. 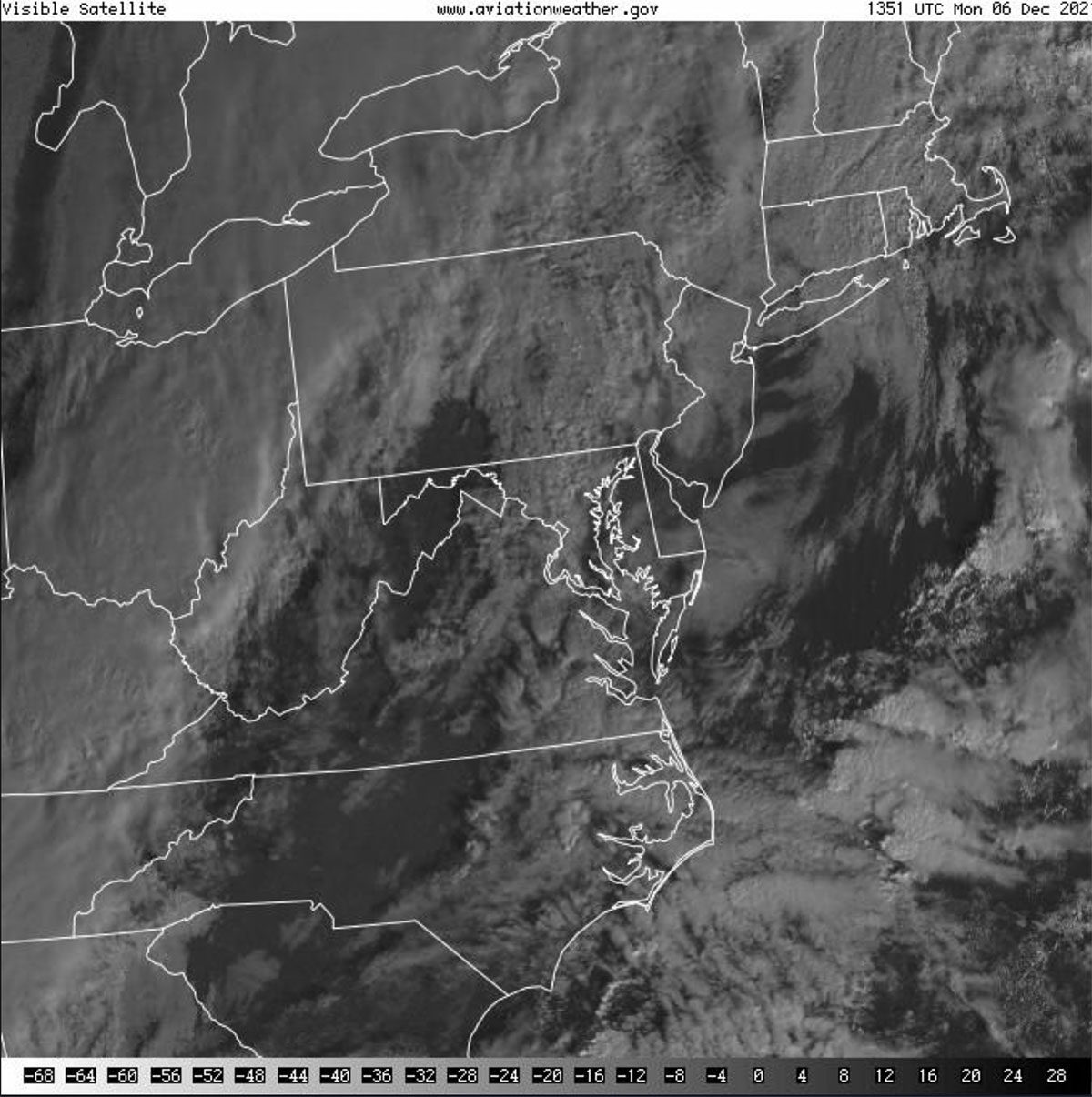 For a more detailed look at whether conditions are VFR or IFR, you take a look at the surface forecast chart in ForeFlight. It shows strong southwesterly winds and some scattered clouds, along with an AIRMET for IFR conditions. 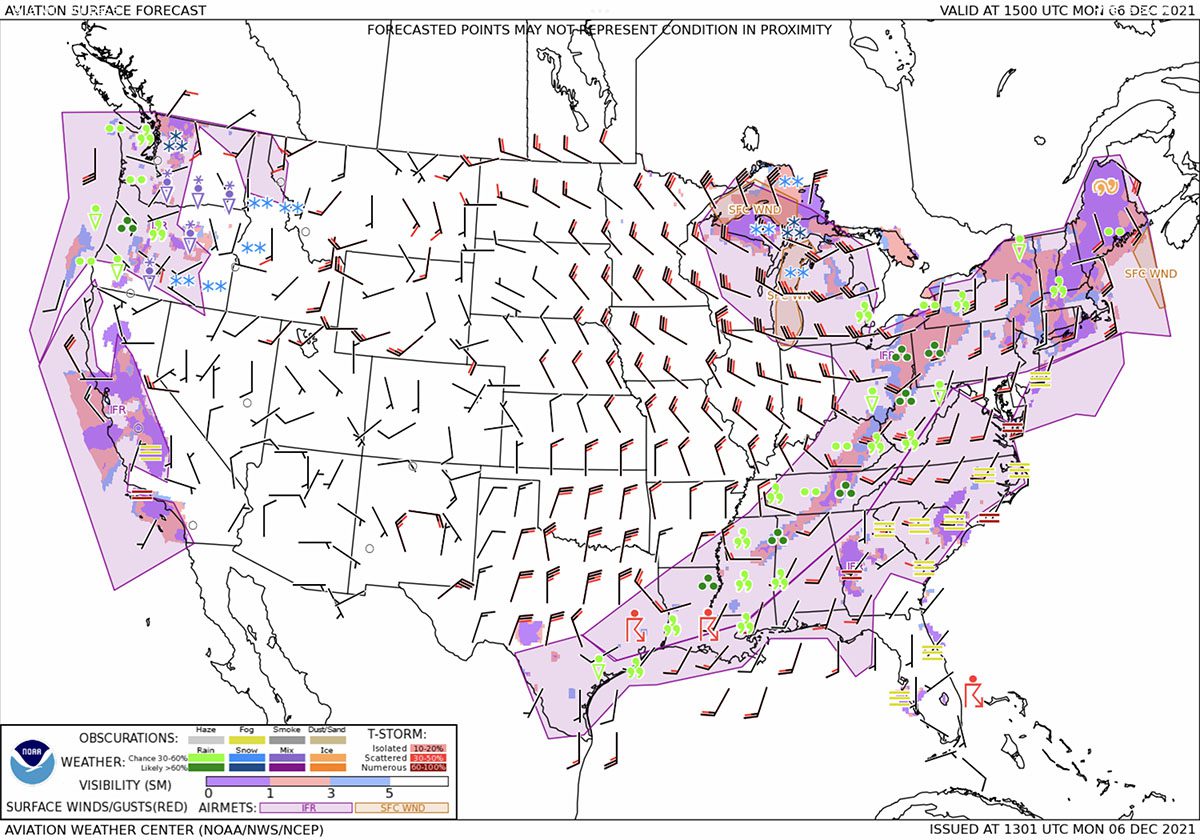 The cloud forecast chart also shows a much more pessimistic view than the current satellite image. 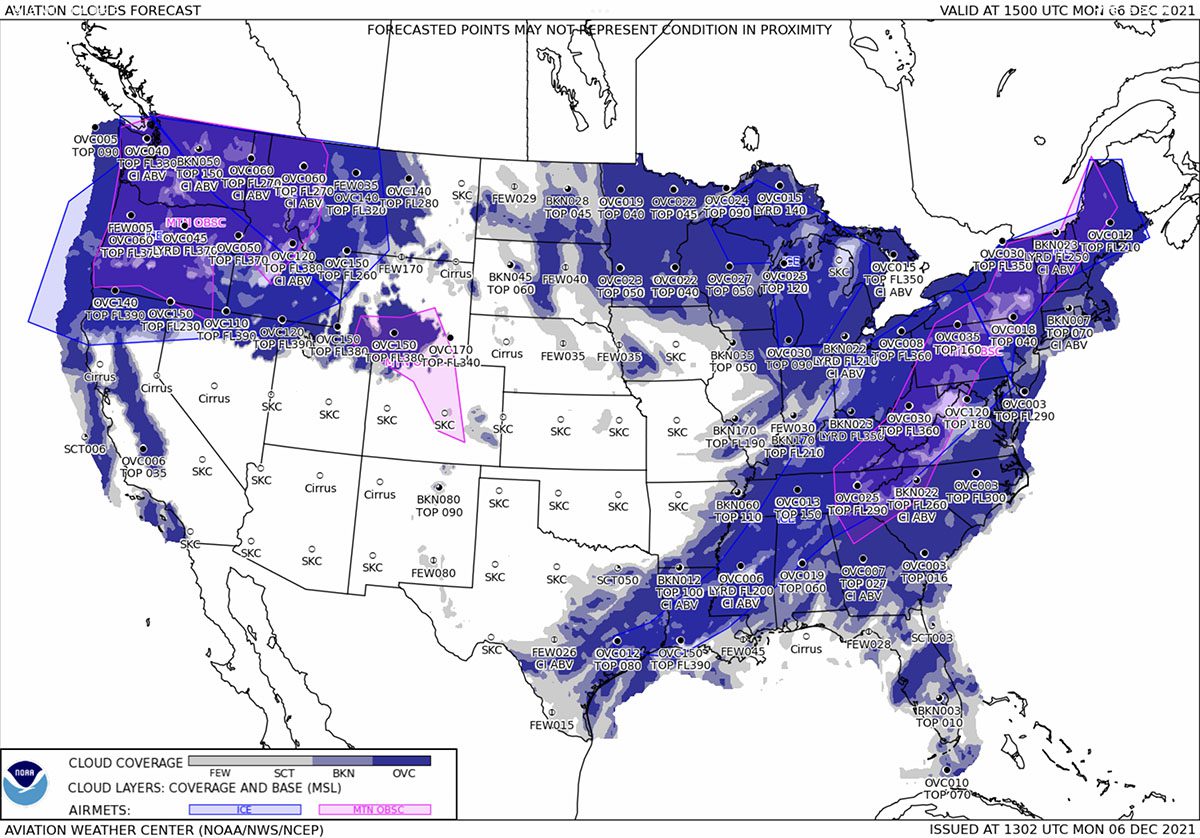 It’s not surprising that the wind is blowing, given that cold front. The winds aloft chart confirms you would have a nice tailwind on the way to Virginia. 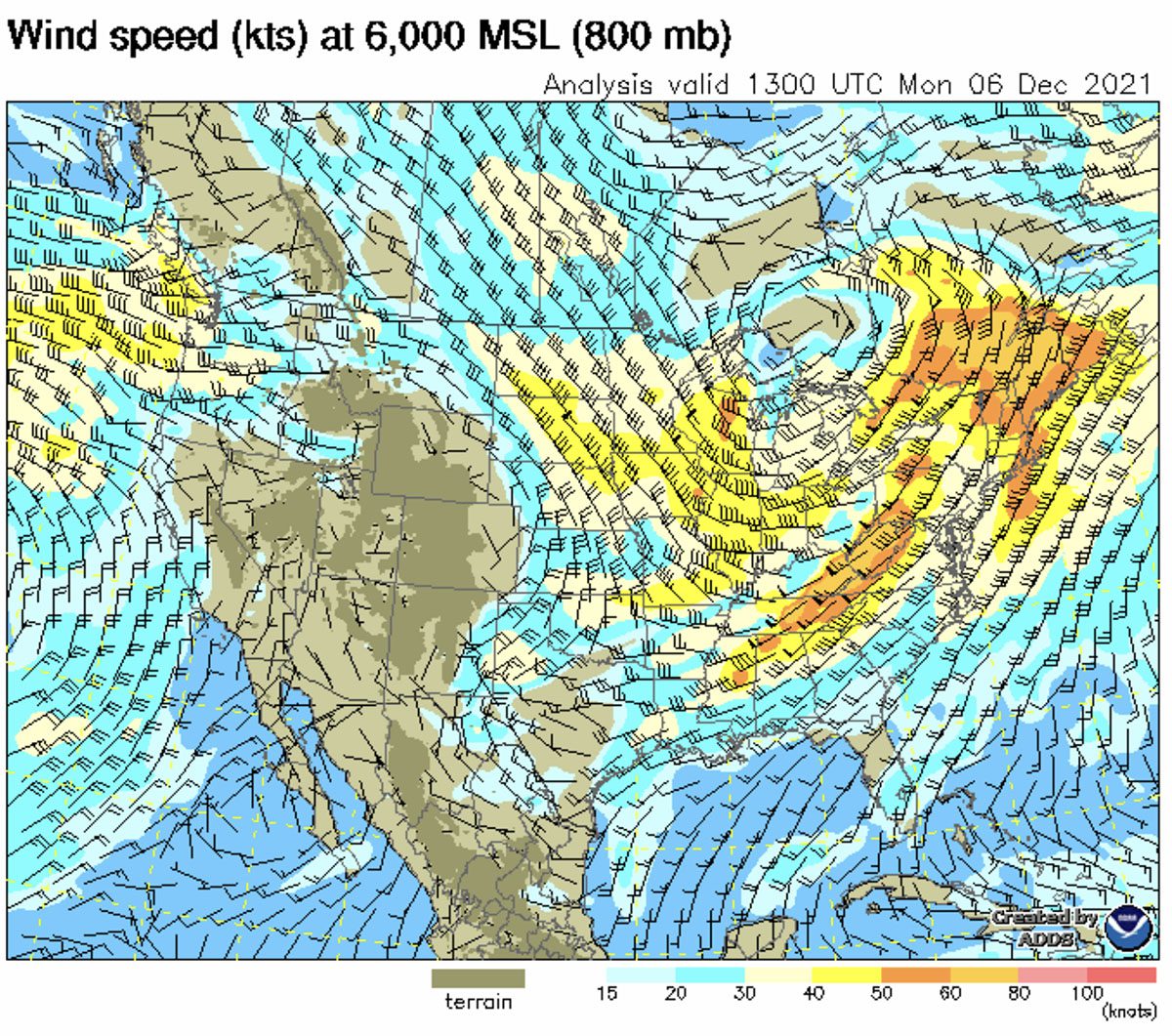 Will it cause any bumps? The AIRMETs for turbulence are all around, but once again not along your route (at least not yet). 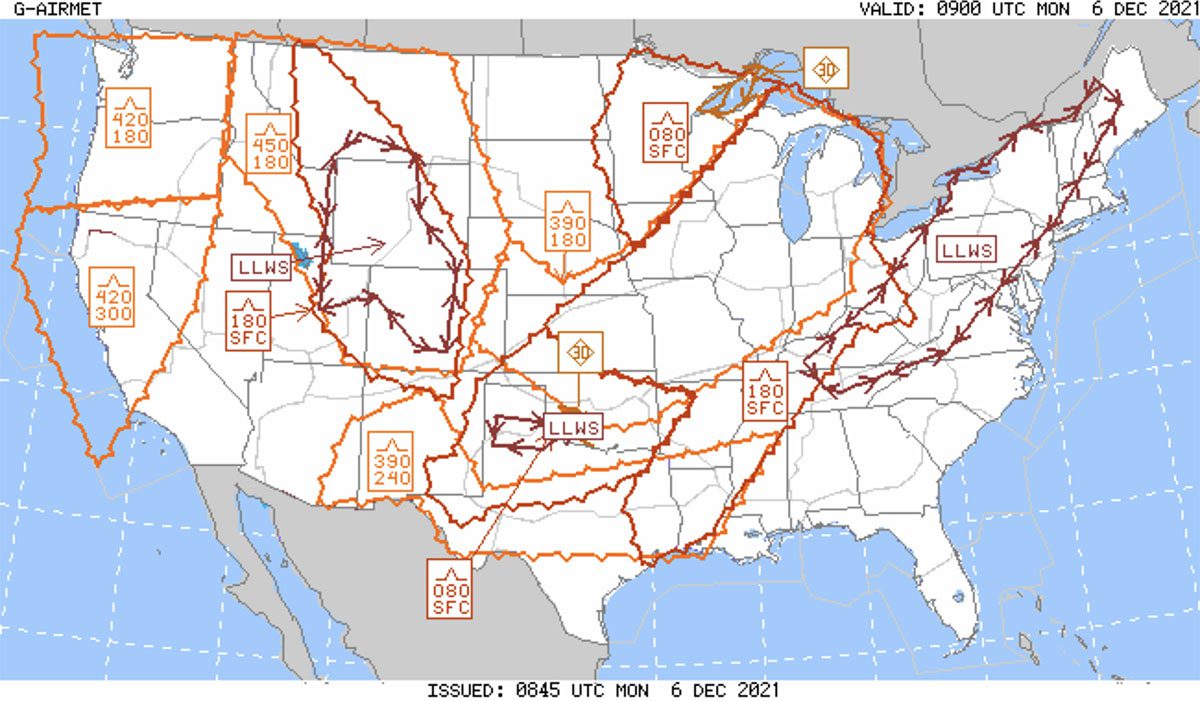 With the big picture in mind, it’s time to review individual airport weather. Your departure airport is showing good VFR and light winds, although the TAF suggests that won’t last too long. 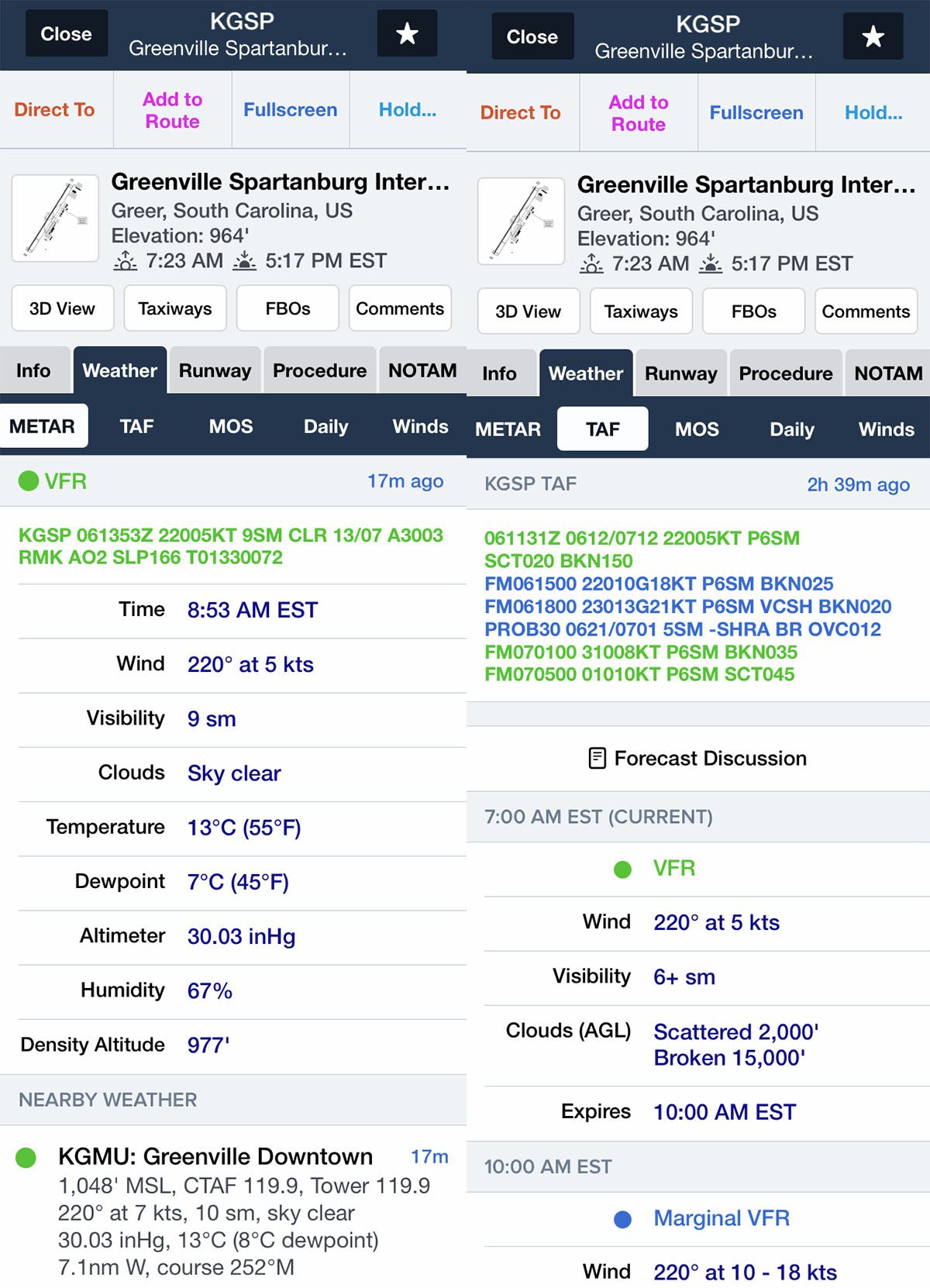 En route, the map shows mostly VFR conditions, but there are a few pockets reporting some early morning mist. Is this burning off or something more widespread? 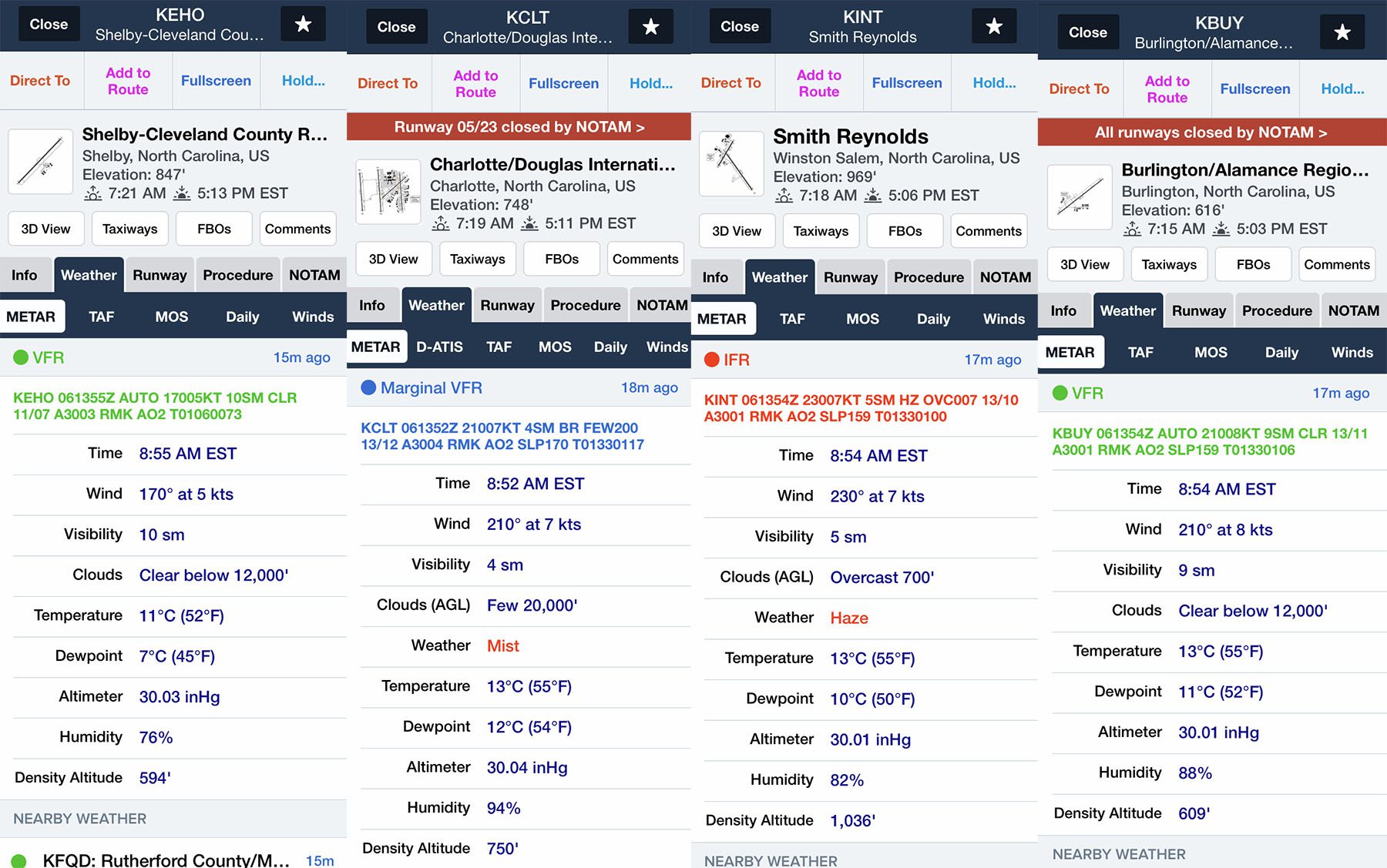 At your destination, conditions are good VFR and forecast to stay that way. The winds will be picking up as the day goes on, though. 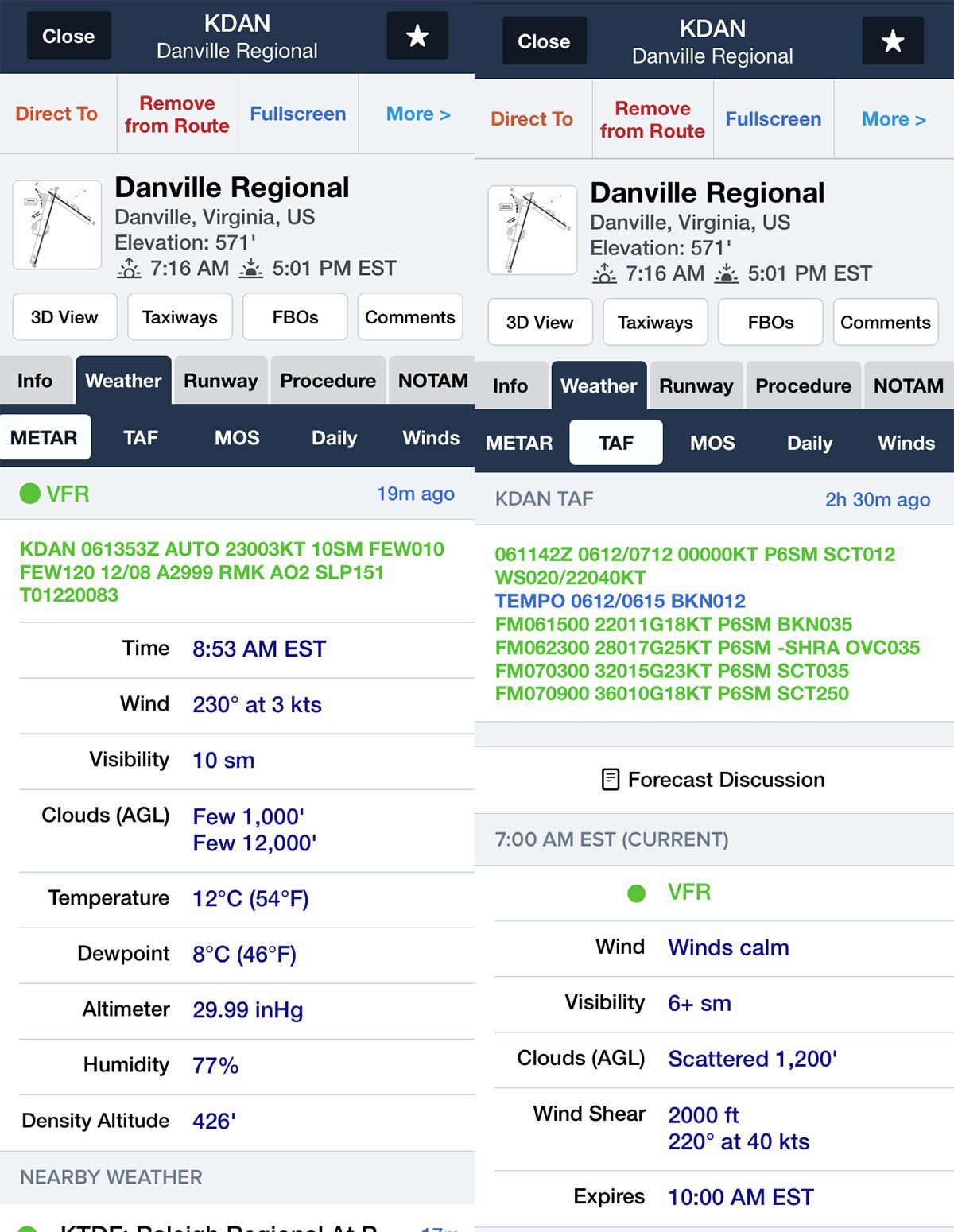 It’s time to decide whether you’re headed for the airplane or the car, and once again Mother Nature has posed a tough decision. While it might not be the best day for a student pilot’s first cross country, it does look flyable: the weather at departure and destination is excellent and you should arrive in Danville long before the cold front moves in. You could have a quick flight to work today and fly home Thursday as planned, well on the backside of the front. On the other hand, the window of opportunity here is narrow and there are scattered reports of marginal VFR and even IFR. Will you really be in the clear all the way to Danville? Will the wind pick up too fast?

The only flight time that counts

Stabilized approaches: the last six inches is all that counts
Scroll to top