Just because the calendar says spring doesn’t mean in-flight icing is no longer a concern—especially around your home base in Chicago. That means today’s proposed flight home from Detroit (PTK) to Gary, Indiana (GYY), might be a challenge. You are instrument rated and current, so you’re planning on an IFR flight for the 1+20 trip. Your Cirrus SR22 has a TKS deice system but not a “known ice” system, so it’s mostly useful for escaping ice and not plowing through it.

Read the weather forecast below and tell us if you would go or cancel. Proposed departure time is 1530Z.

The Map view in ForeFlight looks mostly clear, with just a few scattered showers to the south of your route. But there are definitely some IFR conditions at most airports, and a few icing PIREPs. 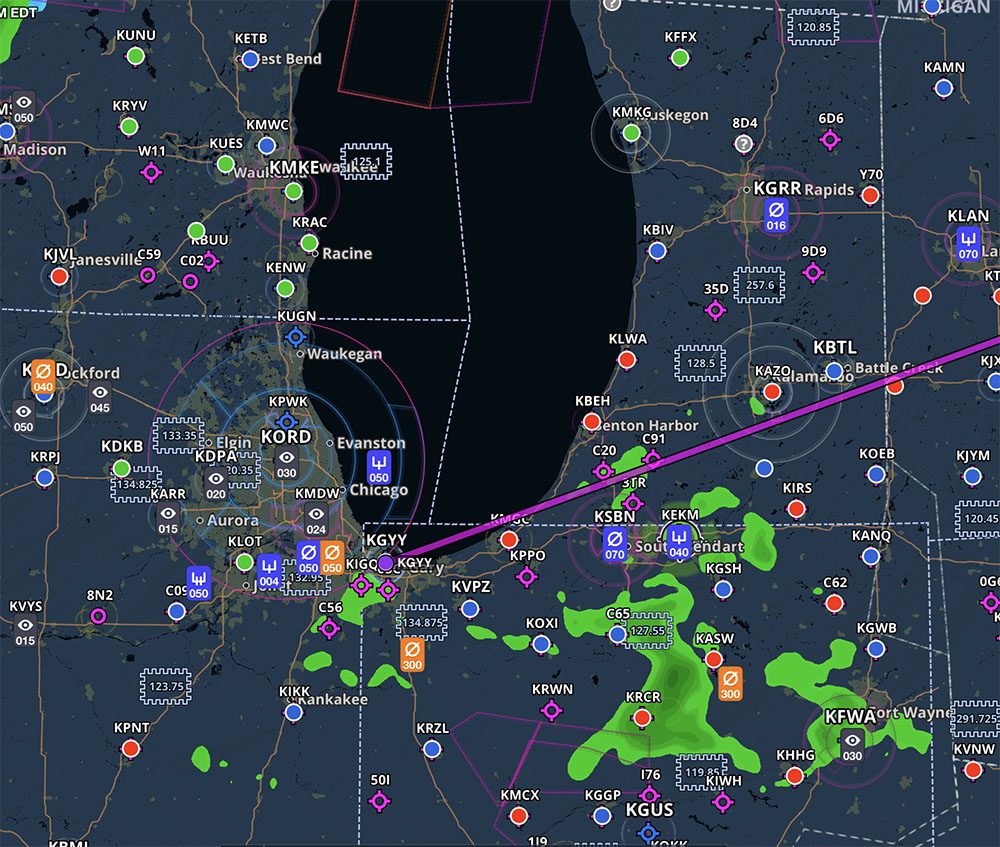 The surface analysis shows that your route is in between two fronts, with a weak cold front to the southeast and another front moving in from the west. 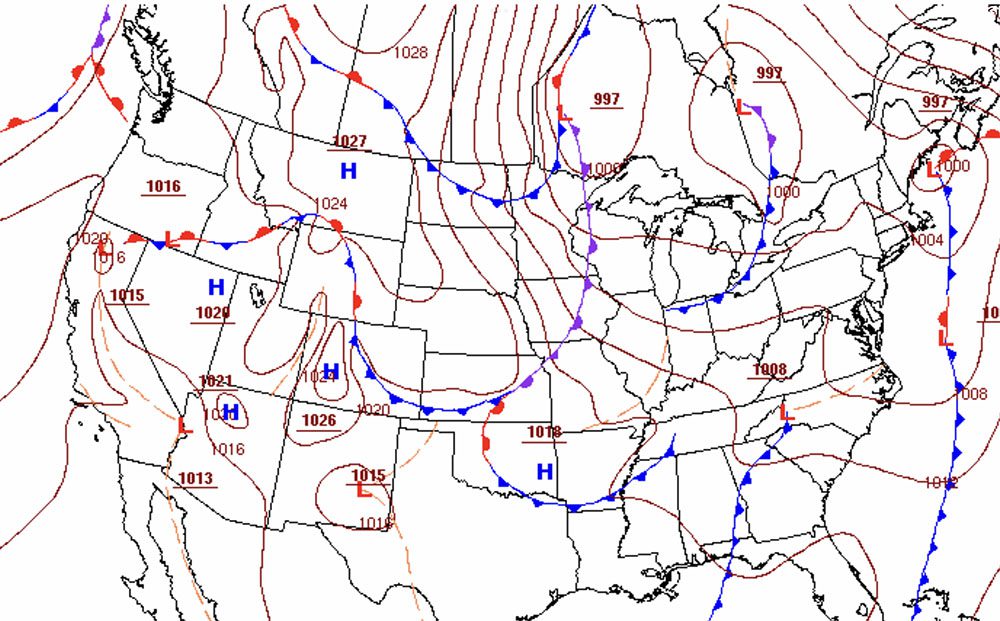 The prog charts show that conditions won’t get much better tonight or tomorrow as that next front moves in, so delay isn’t a great option. Here’s the 00Z chart. 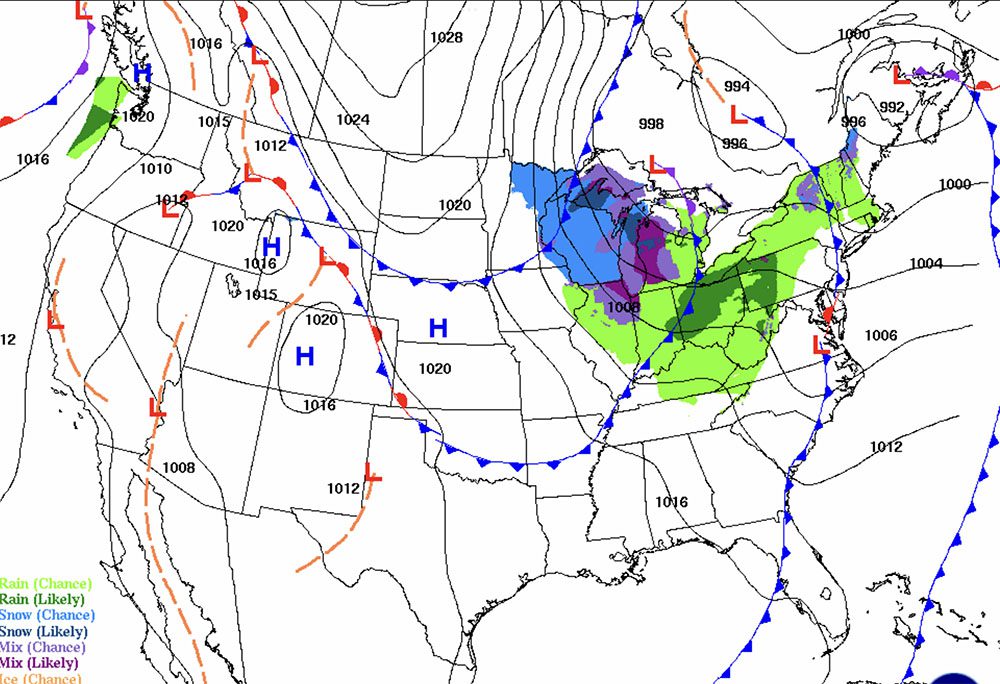 The satellite image shows there are widespread clouds ahead of this front, but they might have fairly low tops. 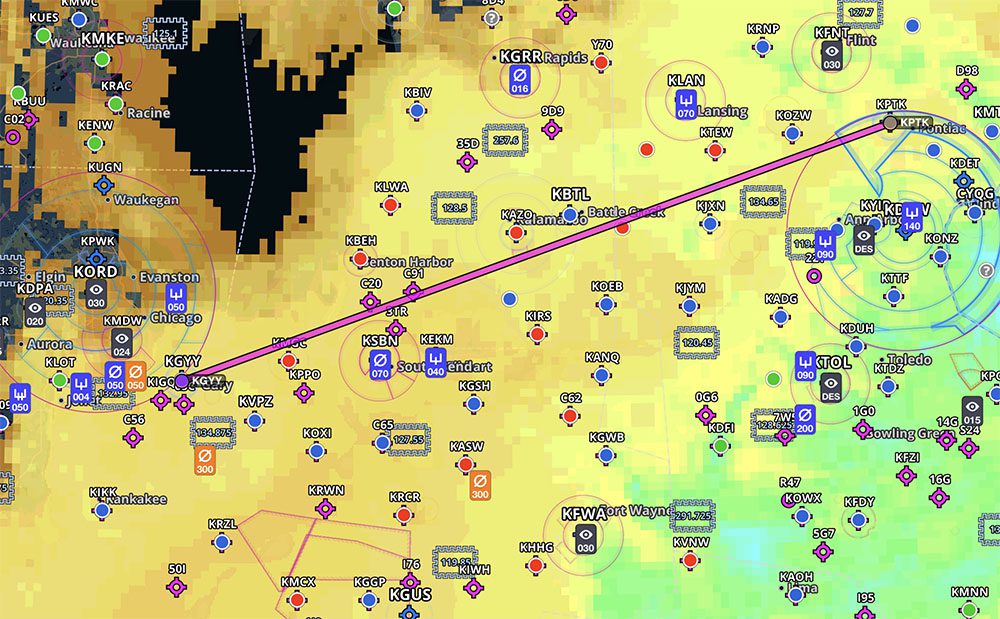 This appears to be the main threat today, so it’s time to dive into all the details. First, a look at the AIRMETs for icing—sure enough, there’s one right across your route. 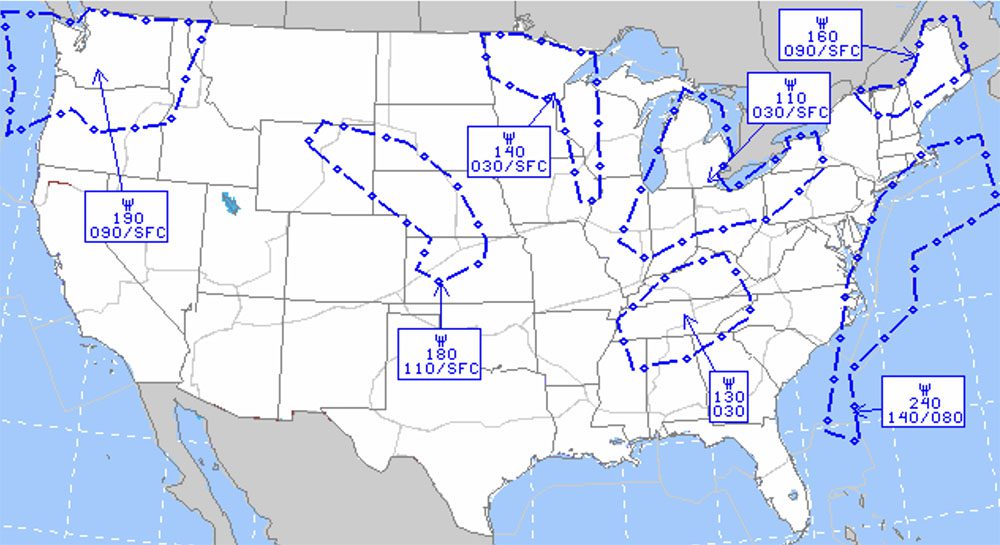 The visual icing forecast offers a lot more precision than an AIRMET, including a more three dimensional view of the atmosphere. At 3000 ft, there is plenty of icing along your route, but most of it looks light: 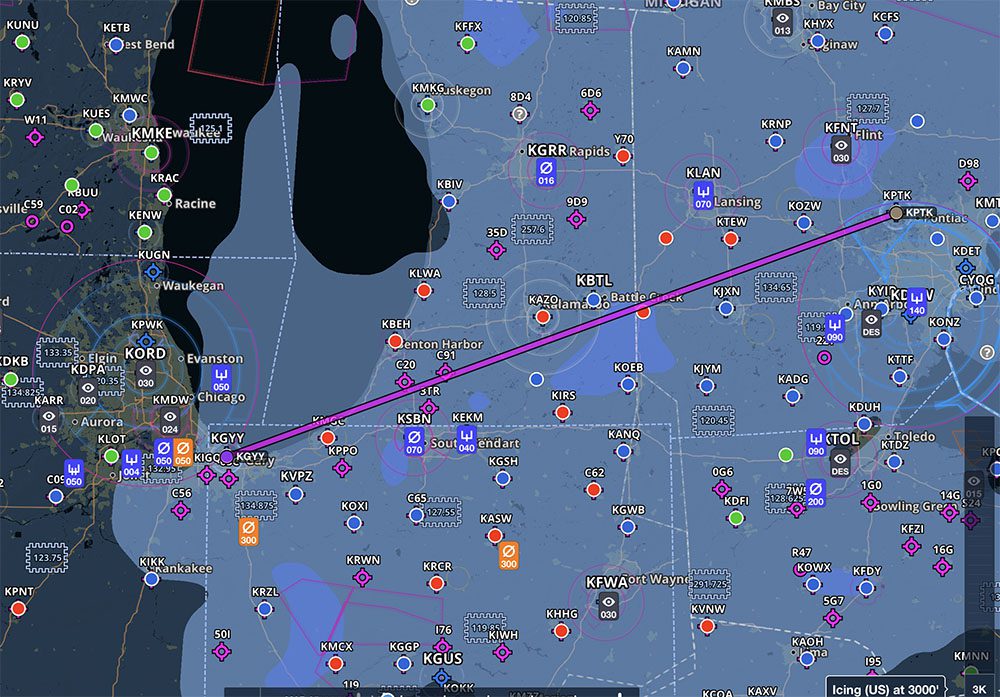 At 4000 ft the icing appears to be more significant. 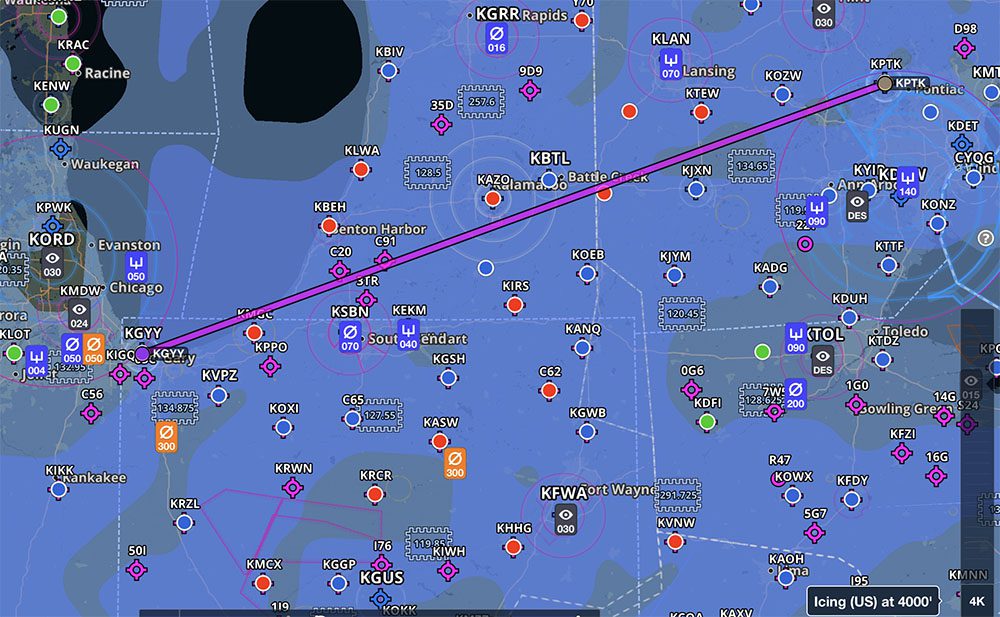 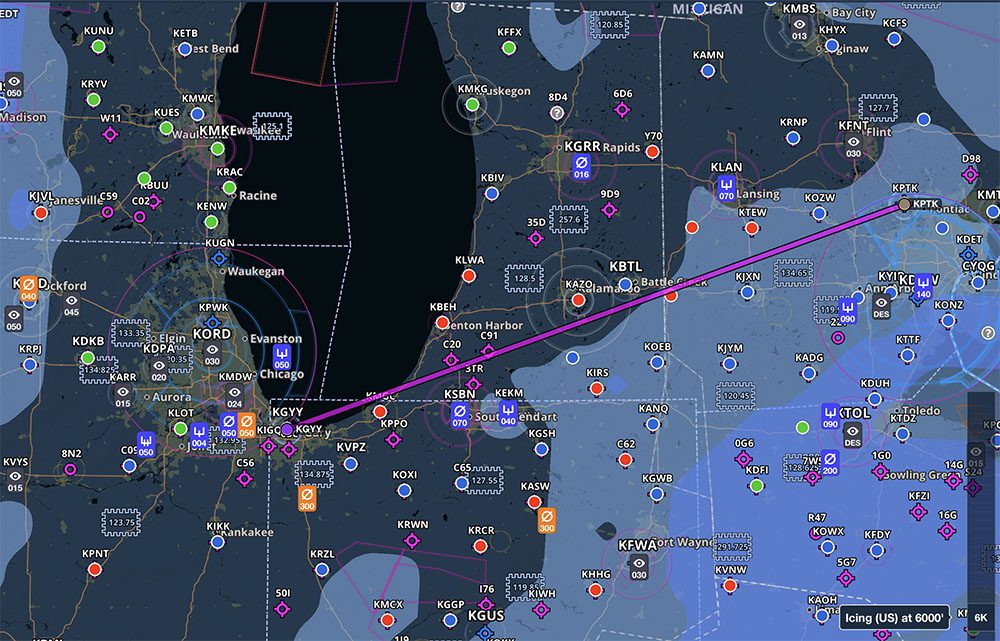 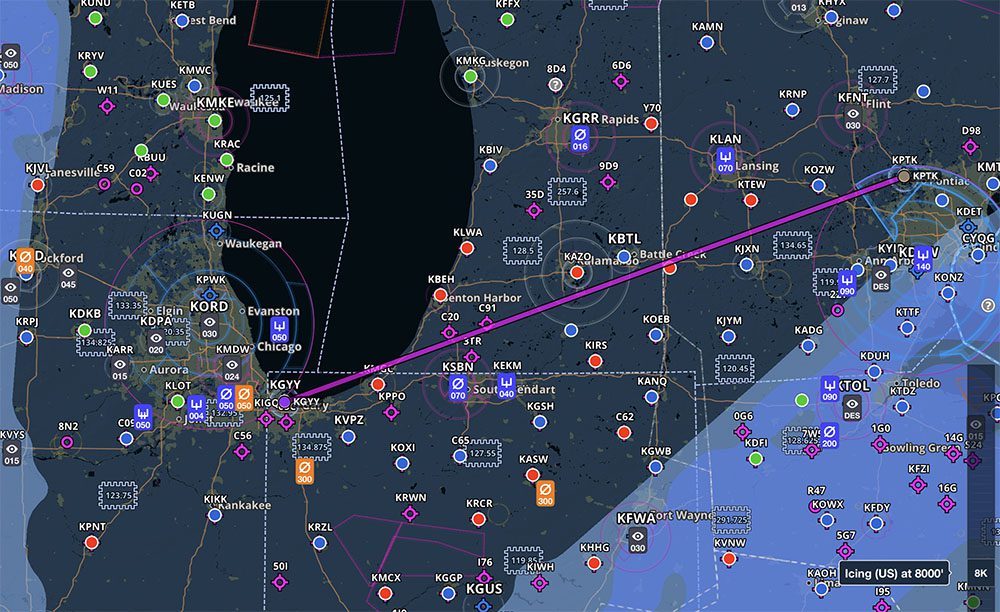 The visual cloud forecast backs up this last icing layer, suggesting tops are somewhere between 5000 and 7000 feet across southern Michigan and the Lake Michigan area. 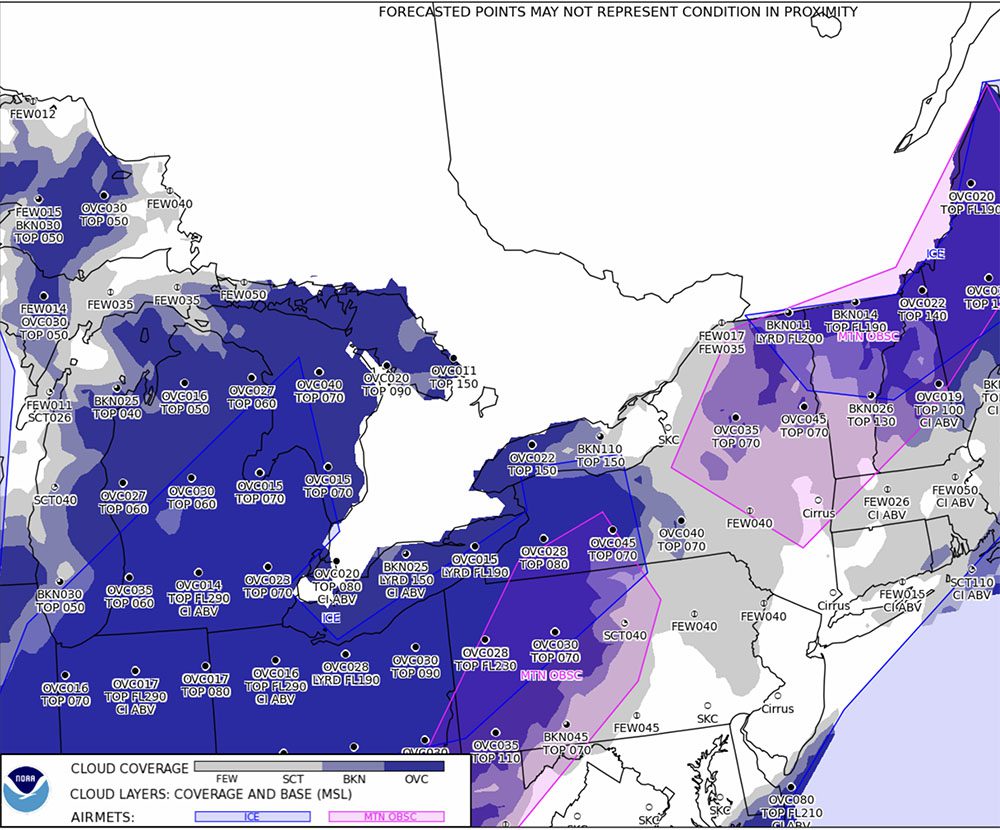 Now that you have a good overview of potential icing, it’s always important to back it up with real observations from pilots. There are plenty of PIREPs to read today. The first one, just northwest of your departure airport, shows two thin layers with tops at 6400 feet and just a trace of rime ice in the upper layer. 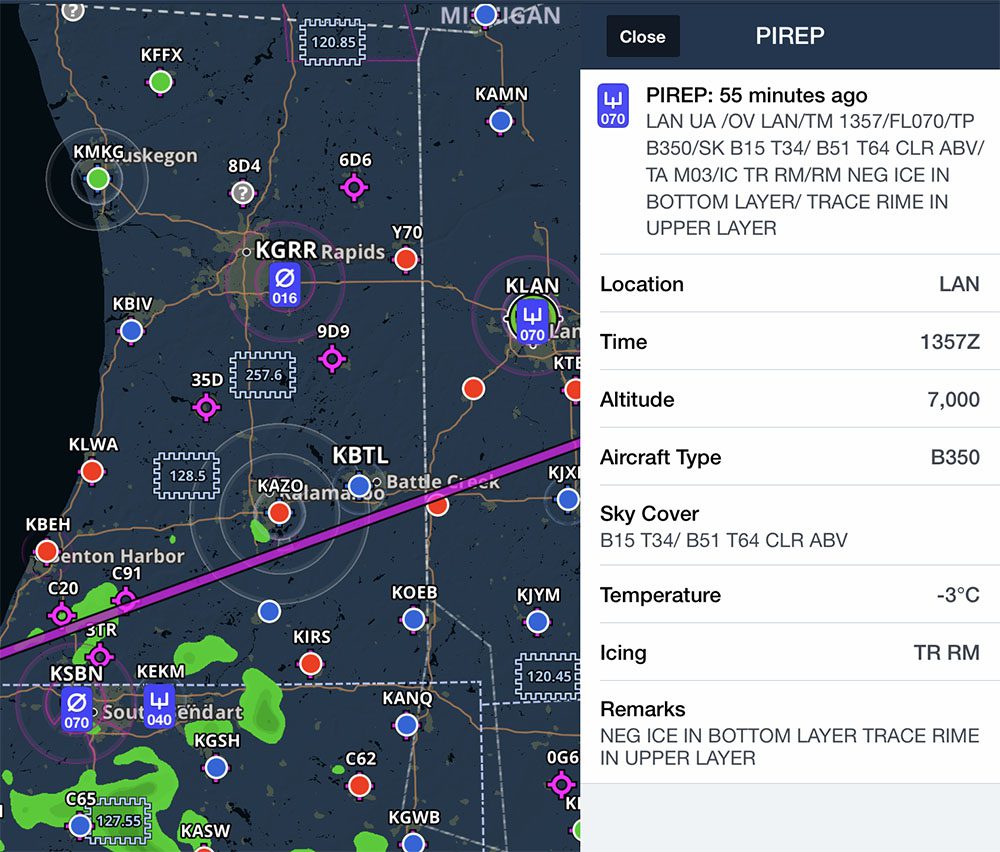 Further down the road, over South Bend, tops are reported at 7000 ft and clear above. 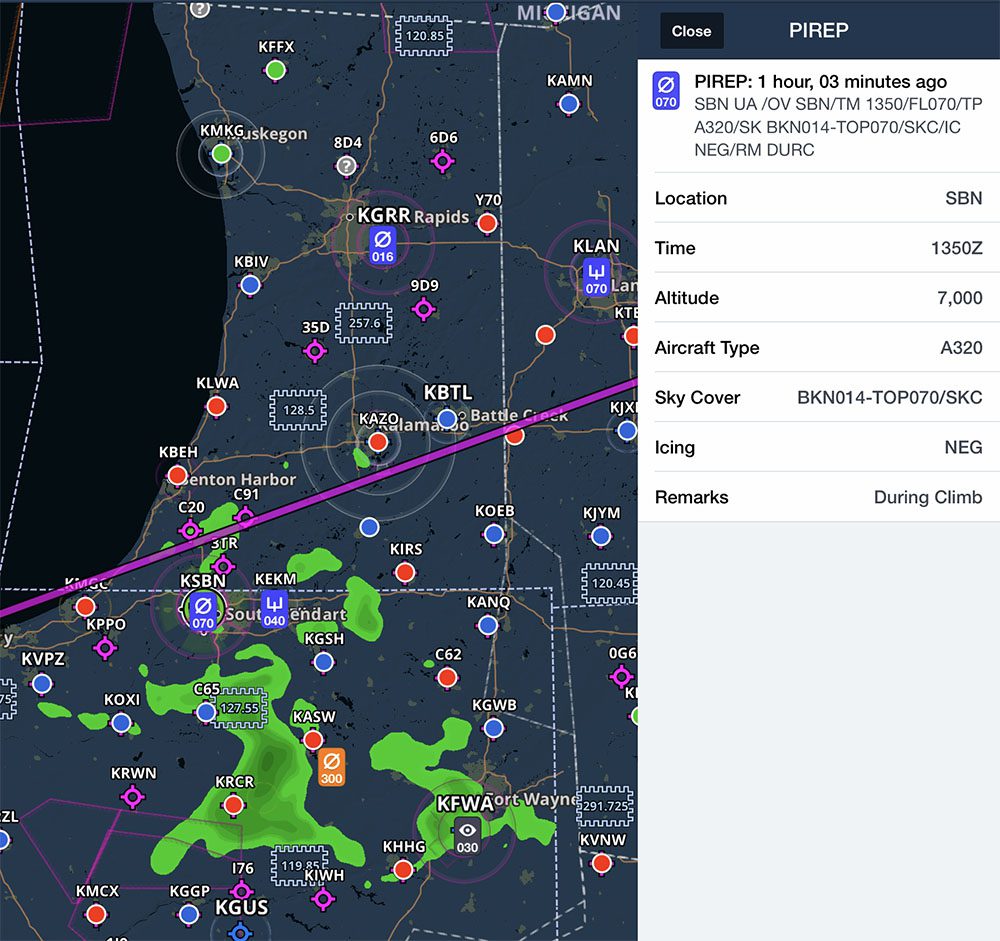 Another report near South Bend shows tops at 6100 feet and light rime during the climb through the 2100 ft thick layer. 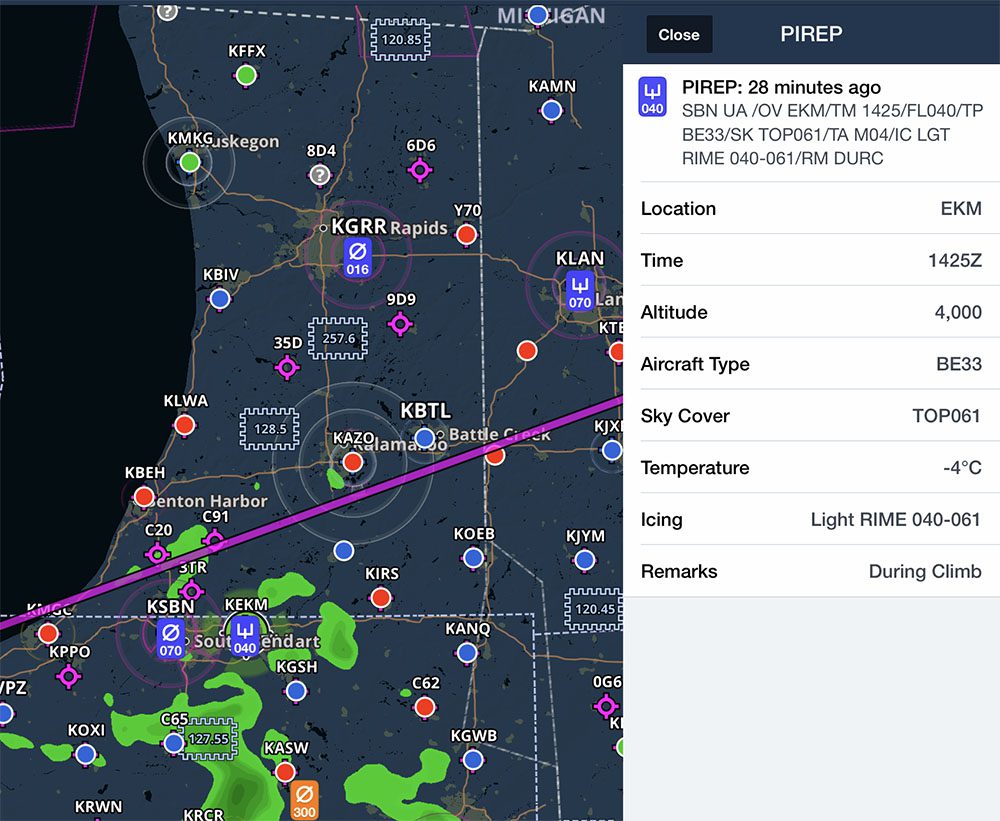 Closer to Chicago, there are conflicting reports. First, a 737 PIREP shows negative ice, a smooth ride, and tops at 5400 ft. 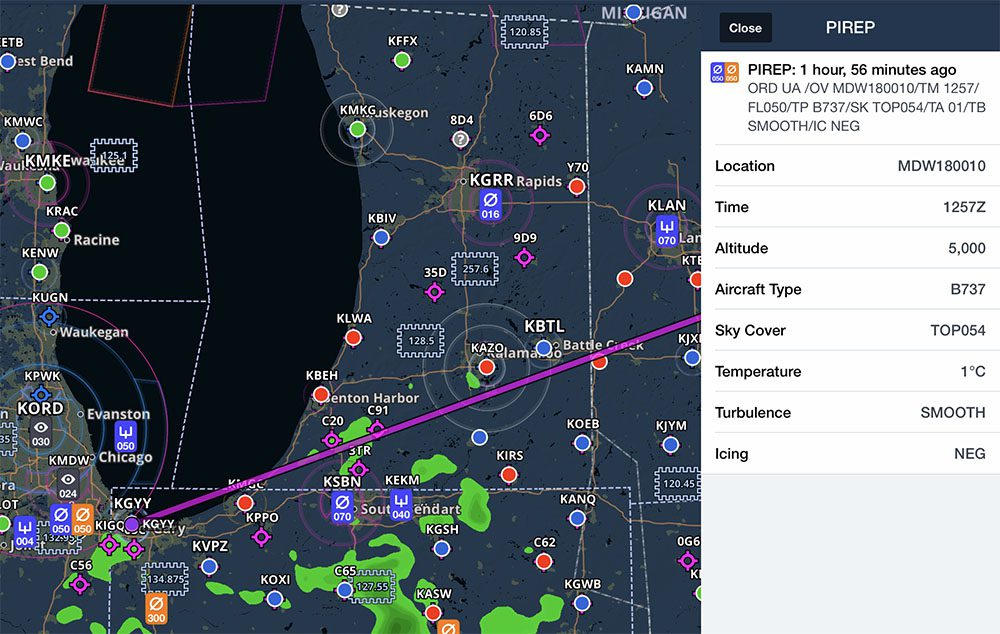 Another one, a little further west, reported moderate mixed icing between 4000 and 6000 ft. 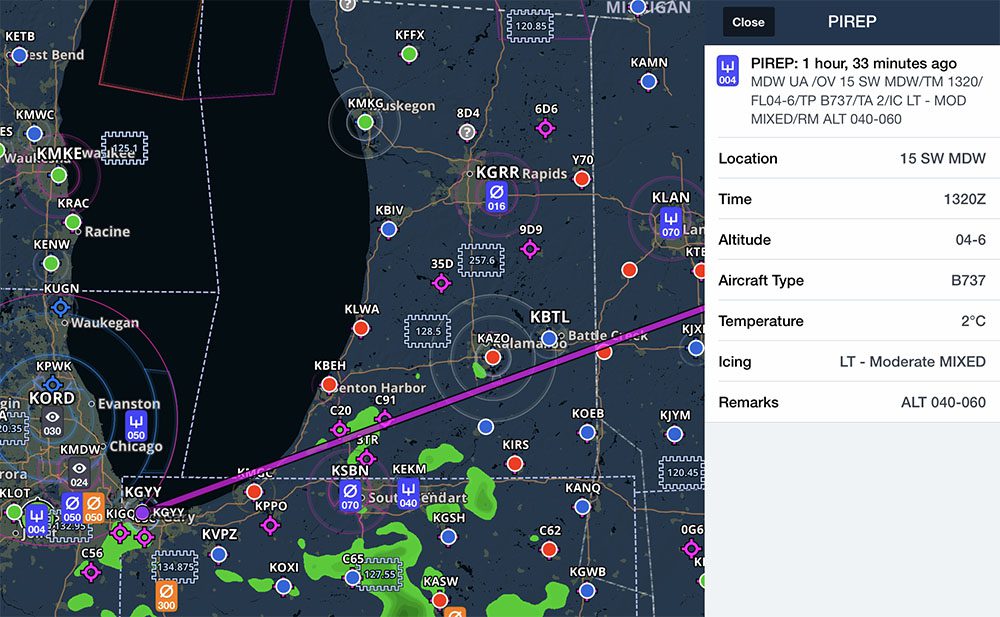 Finally, even further to the west a Cessna 414 reported moderate rime ice at 5000 ft. 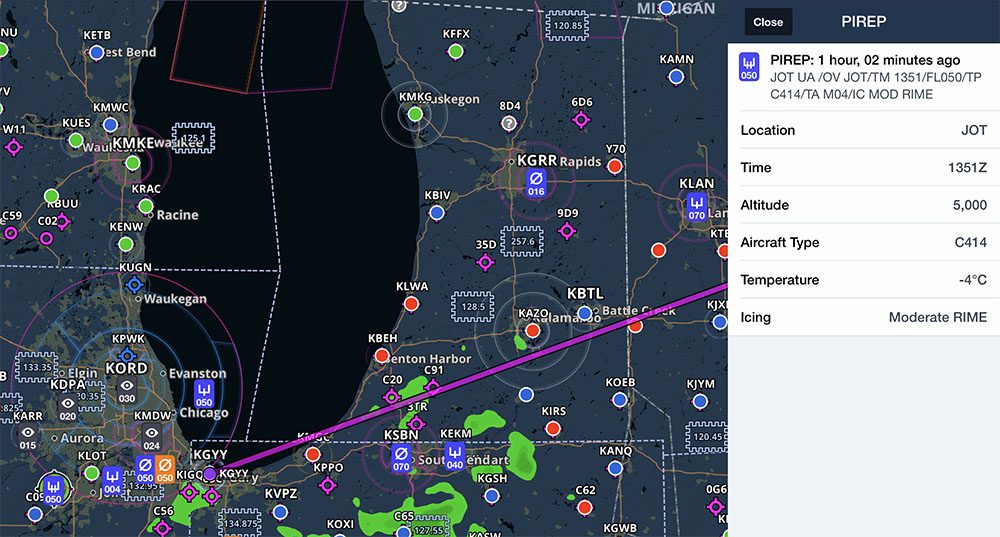 So much for the icing forecasts and PIREPs. You also need to know about conditions on the ground, both for a potential escape from icing and for making a landing at Gary. Your departure airport is reporting marginal VFR conditions, and it’s forecast to stay that way through the afternoon. 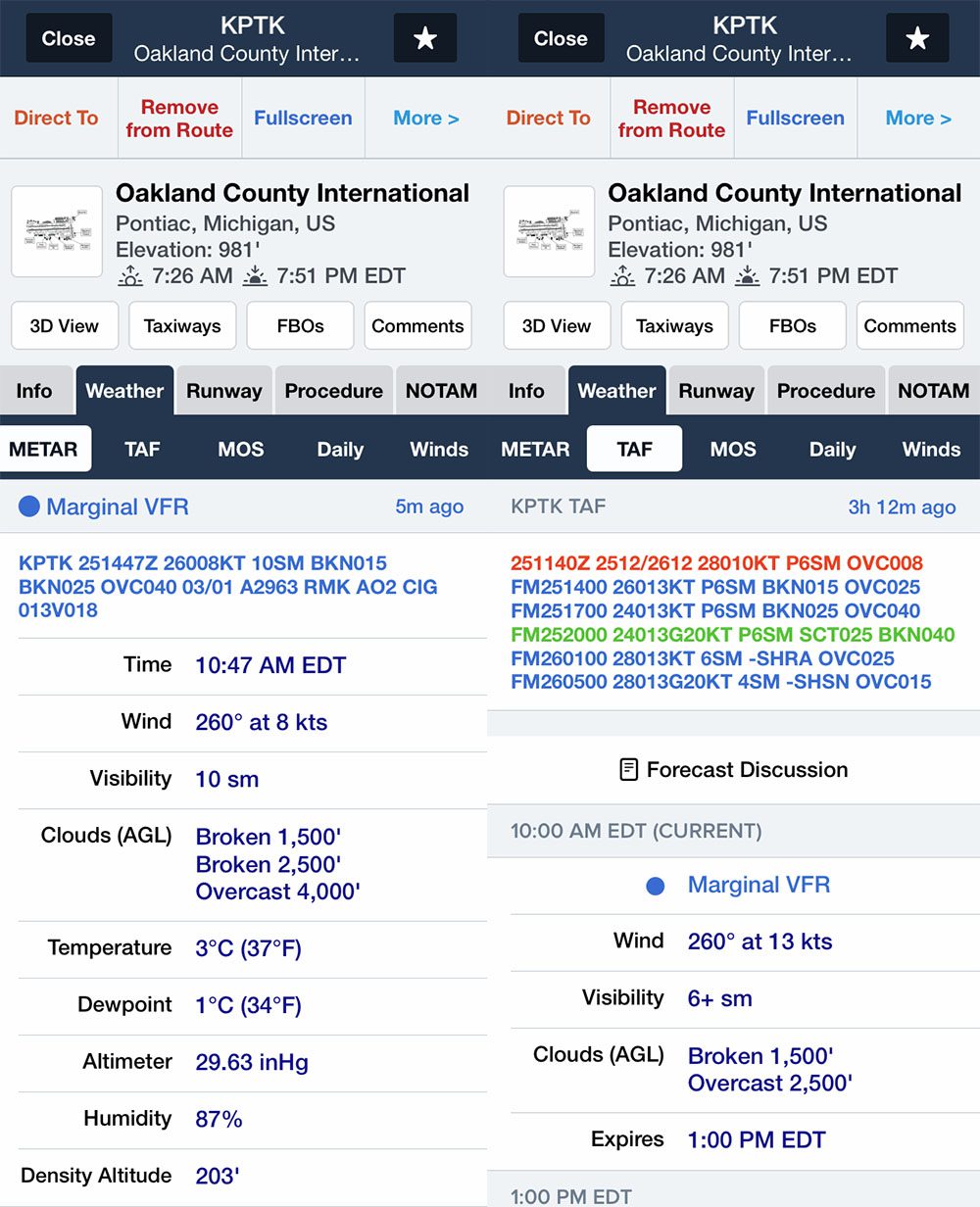 En route, weather conditions seem to vary between marginal VFR and IFR. Two airports along your route report the same lower cloud layer, with bases around 800 to 900 ft. 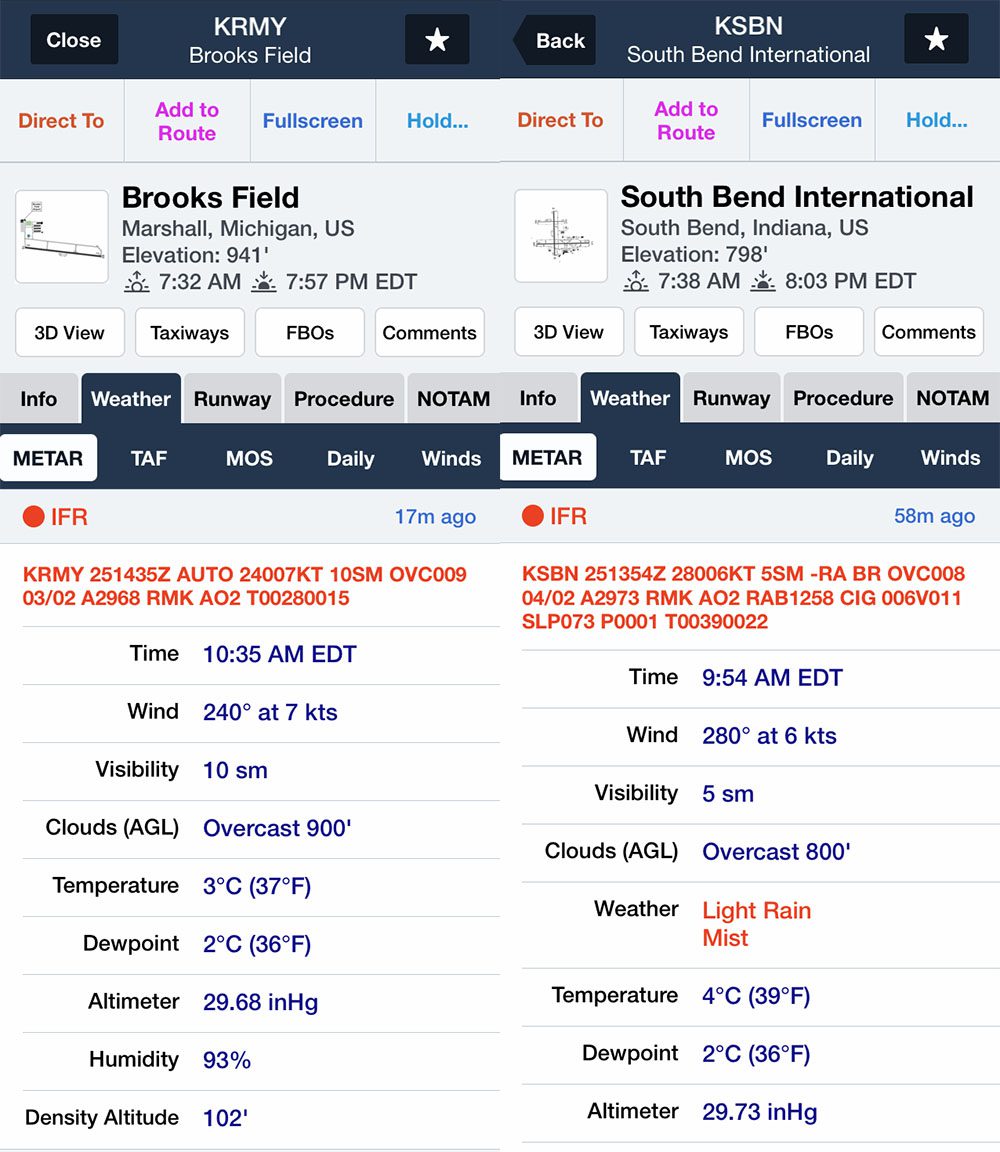 Weather at your destination is marginal VFR and forecast to stay that way, but with gusty winds and occasional rain showers. 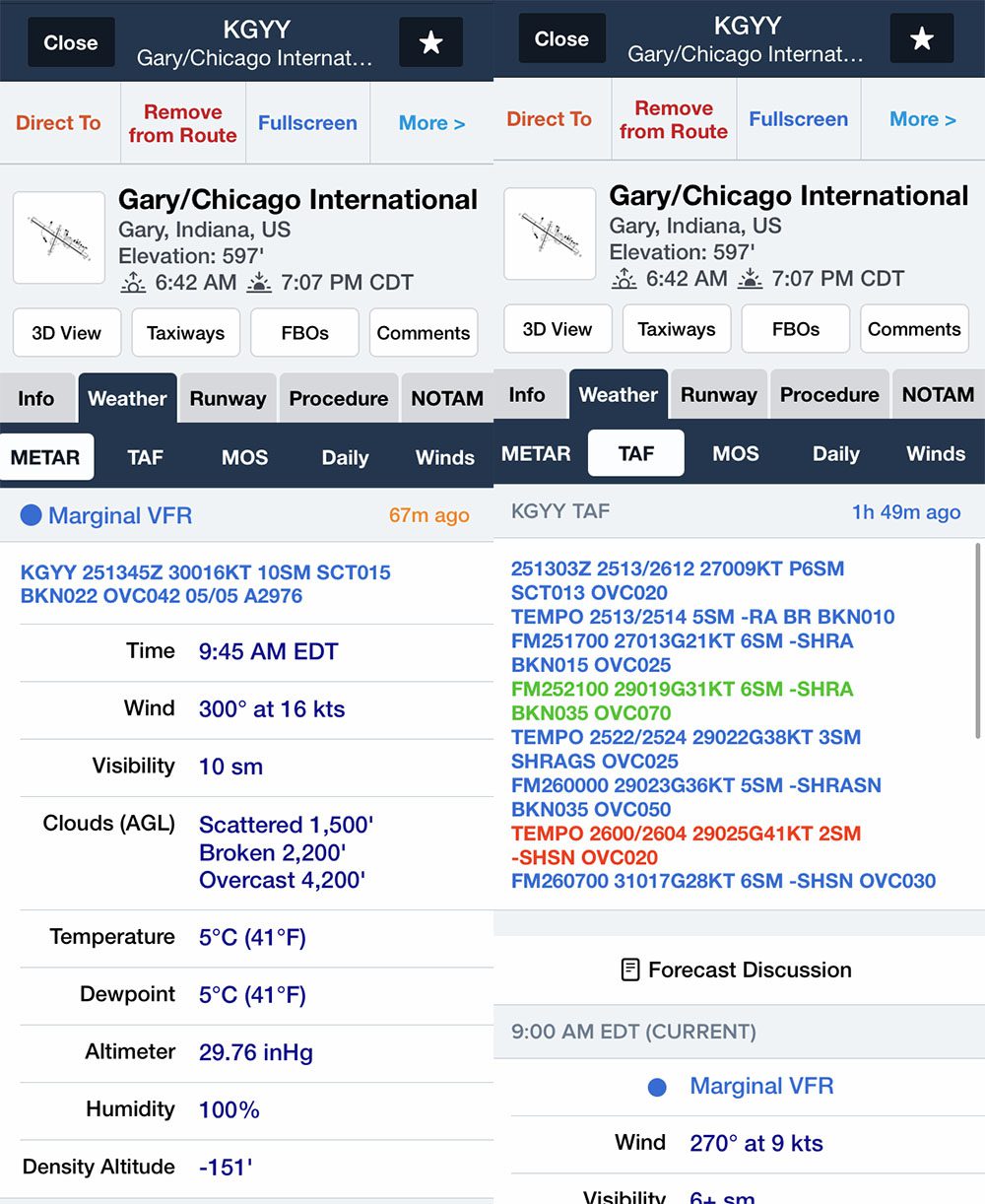 This is a classic IFR conundrum in the northern parts of the US. Overall weather is pretty benign, with reasonably high ceilings and good visibility, but there are enough cold clouds to make icing a legitimate concern. On the one hand, you can probably get on top today and cruise to Chicago ice-free at 6000 or 8000 ft. On the other hand, you’ll most likely have to climb and descend through a layer with some ice. Your airplane is equipped to handle some ice, but how much?

Add a comment below and tell us what you think: is it a go or a no go?

Safety, philosophy, and the glass cockpit
Scroll to top