Blog - Latest News
You are here: Home1 / Article Archive2 / I was there3 / Rollicking in the clouds

It was in the early fall of that year. Mid-September colors bloomed but were muted on that day because of an overcast sky. The underbelly of the clouds showed a clustering of six-packs filled with stored energy, pinned to the geolocation, unmoving, and stilled. It was grimy below for all of us inhabitants in that western part of Michigan.

The lineperson, a young 20-some-year-old Michigander, drove us from the FBO to the owner’s Mooney Ovation. He was courteous and did not accept any gratuity, “because,” he said, “it’s my job!” Imagine that?

The owner/pilot, a 50+ year-old, did the preflight as I observed, both checking off items necessary for an IFR flight. We would soon be in that dull gray a mere 500 feet above us, which seemed to be beckoning us with its gnarly index finger.

I looked over his pilot sheet to see that he had logged over 400 hours of instrument flight and about 1200 total time. Seemed like a healthy ratio for a flyer. I noticed that he seemed a bit anxious, but I chalked it up to the nervous energy that comes from anticipation mixed with a tincture of performance anxiety. He was at the Pilot Proficiency Program after all, and I was the instructor. 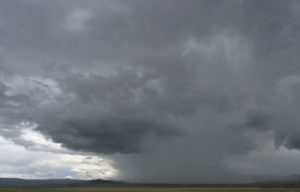 The clouds are beckoning—are you ready?

With the tower clearance in hand and programmed into the Garmin 430, we were ready to fly. As we taxied to the runway, he kept fidgeting with his checklist and finally I asked if everything was OK. “Yes, yes, of course,” he replied, as we taxied to the assigned runway.

Soon we were hurtling down the runway, accelerating to the roar of the IO-550 as the propellor blade tips vanished into a vague circular outline. The aircraft lifted off and we were airborne. Our clearance was, “runway heading and vectors for the climb.” The thin wisps of the clouds floated by as we broke through 300 feet like the schools of dolphins swimming around a humpback whale.

The gear was still extended, so I called for the gear retraction. The pilot dutifully did so, mumbling to himself along the way (audible to my ears through the headset). The visibility in the 7-degree pitch angle soon become restricted and the gray overcast started to surround us. The aircraft pitched up to 10 degrees and the airspeed decayed into the white arc and then back down to level flight, with the airspeed racing around the green arc. The roller coaster ride had begun.

We were barely in the clouds for a minute and the aircraft was in a 20-degree bank. I pointed it out and he corrected it, only to lose the altitude and then moments later executed the opposite. That “heavy left hand” was going to exact its commission. The aircraft was back in a left 30-degree bank before you could say, “Hey, watch it!” and the tortured climb rate became a free-wheeling descent rate. The altimeter was having quite the day.

I pointed to the attitude indicator, and he seemed oblivious, concentrating his fixated vision somewhere else on the panel. I nudged the yoke to correct the deficiency and that brought him out of his stupor. We broke through the first layer in the clouds and his white knuckles relaxed a bit as he looked out through the windshield.

Soon we were following the sloping surface of the clouds into a right 10-degree bank angle as the HSI slowly and dutifully turned to keep pace. Again, I pointed out the problem and he corrected the error. Well, I thought, this was going to be a long two hours of exercise. So, I placed my knees on both sides of the yoke to prevent his over-correcting tendencies. That seemed to work for a while. He caught on to my trick soon enough and smiled sheepishly. Unfortunately, there were no VFR conditions within 100 miles of Muskegon. I asked him to level out at our final altitude of 5000 feet and activated the autopilot for straight and level.

A few minutes later he was calm and fairly collected in his thoughts. I deactivated the autopilot and asked him to hand-fly straight and level for a while. This time it was better: a few deviations of 200 feet up and down and five degrees left and right, but overall he was recognizing his errors and correcting them quicker. I then asked him if it was OK if I simply tapped on the headset boom to call his attention to a potential error instead of pointing it out directly. He agreed and then the rat-ta-tat started. 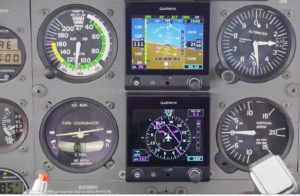 Are the instruments following your commands, or vice versa?

We asked for a block altitude as we maneuvered over a VOR in a holding pattern and ATC was very obliging. As the hour drifted by, the variance in his inputs diminished. Soon his spine erected, he sat straighter, and his grip on the yoke grew less fierce as more blood flowed to his knuckles. The two hours ticked by agonizingly as we bounced around, rocking and rolling in the clouds, going from what felt like gale force winds to gusty breeze turbulence.

I decided we needed to get back to the airport for a respite; the next two hours would be spent doing approaches. But we needed to do a precision approach to get down. My quandary was whether I should I let him hand fly or monitor an autopilot-guided approach. I decided on the latter for the first half and then let him hand fly the remainder to establish his confidence level.

The KFC 150 in his aircraft was a respectable autopilot for the purpose. He hand-flew down to the initial approach fix and then established a straight and level attitude at the appropriate power and trim setting at the glideslope intercept altitude. From there, the autopilot dutifully took over with the requisite push of the appropriate buttons. At the final approach fix, he put the gear down and the aircraft was on rails down to the 1000 feet. It was smooth once again. I called out the altitudes since he was fixated on the mechanics of the approach. At the 1000 feet, as I had instructed, he took over from “George” and hand flew the remaining 500 feet before the breakout from the smooth but dismal dark grey canopy.

We landed without incident, and he was all apologetic about his performance. I asked him how many hand-flown real instrument flights he had accomplished. He hesitated, then said that this was his first one after his initial IFR training. He mostly flew in the IFR system in VFR conditions. Well, I thought, that explains a lot. We finished the remaining two hours with much less ado. The sky retracted the ceiling a bit to 1000 feet and all was well with my student’s world. Less of push-pull-left-right and more of minor trim adjustments with smaller inputs. It’s a wonder how quickly the mind adjusts to a different reality with some confidence.

An instrument ticket does not mean proficiency or experience in actual conditions. It only means one has accomplished the required tasks within the standards under a view limiting device, and not necessarily in the thicket of the clouds. This reminded me of a fellow who would wear his “foggles” when entering the clouds, because he felt more comfortable flying that way in the clouds.

Oh well, to each his own, I guess.

Close encounters of the worst kind
Scroll to top