Blog - Latest News
You are here: Home1 / Article Archive2 / I was there3 / Go with the flow—a day trip to Mackinac Island with a minor hiccup

In August of 2015, I had the opportunity to purchase a beautiful 1965 Cessna 182H Skylane and fulfill my dream of ownership, which I’d had since I earned my PPL in 1972. Having access to your own airplane to travel the USA and bore holes in the sky was all I wanted to do as I looked ahead to retirement. With the support of my wife of 36 years at the time, we made it happen.

My concern was twofold. One, my wife was not what one would call an avid aviatrix in general aviation aircraft. Two, would she understand that the outcome of certain flights may be dictated by the weather, mechanical issues, or other gremlins that raise their ugly head at all the wrong times? 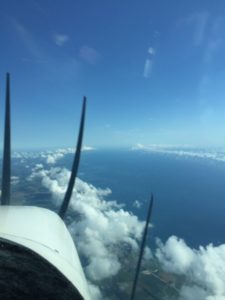 Seeing the country from a few thousand feet is a great reason to own an airplane.

I worked for Cessna Aircraft Company right after we married, and I was on the road almost every week traveling my territory of Texas, Louisiana, and Mississippi, calling on Cessna Pilot Centers in a showroom stock 172 Skyhawk. There were trips which were delayed, postponed, or required an un-planned overnight stay due to the weather or some mechanical issue. I would deal with each as they came up, as it was part of the job. I informed my wife that our Skylane might not be as reliable as the airlines, and she should be prepared for the unexpected and just go with the flow.

During Labor Day weekend of 2016, we decided to fly from our home base at Lake in the Hills, Illinois (3CK), and make a day trip to Mackinac Island, Michigan (MCD). My wife, a Michigander, had never been to Mackinac. It was a last-minute decision to go and having checked for rooms, nothing was available on the island due to the holiday weekend. Not a problem as the trip north would be just under 2.5 hours, with the return trip just over 2.5 hours. This would give us time to walk around the island, have lunch, and enjoy a late afternoon trip back to the Chicagoland area. The weather was forecast to be perfect all weekend.

The flight up to Mackinac Island was splendid, hugging the western shore of Lake Michigan to the Upper Peninsula then due east to Mackinac. The Mackinac Bridge comes into view and just to the east is MCD. The airport is owned by the State Park Commission and upon landing a ranger will ask your intention and provide further instructions. We were directed to park on the grass along the runway as we were there for just the day. Once we paid our landing and parking fee, we were off on our day adventure.

Having consumed our $100 hamburger and walking what seemed like a marathon distance, we ended back at the airport for departure. We planned a short flight to Pellston, Michigan (PLN), for fuel since MCD has no on-site fuel—or for that matter any kind of service, which we soon would fully appreciate. 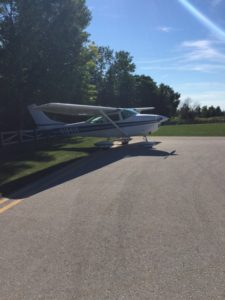 A flat tire is a good way to ruin the perfect day trip.

We taxied out, completed the run-up, and everything was going swell until I added power to taxi onto the active from the run-up ramp. The Skylane would not budge. Okay, I left the parking brake on while doing my run-up. Nope, the brake was off. I tried it again with a little more power and she reluctantly wobbled forward—flat nose tire!

We shut down and dismounted our ride to confirm my assumption. I pushed the Skylane back out of the way to allow the line-up of day visitors depart from runway 08. We walked back to the ranger/FBO, who confirmed there was no service on the field.

After some agonizing and stressful time searching for remote service, I came across an A&P on the mainland at Mackinac County airport (83D). He was available and would secure a tube and tire and rent a 172 from 83D to get him and his gear to us on MCD. He was about one hour away from 83D, which was okay since we would look for a hotel on the island in case it got too late and we needed to spend the night. It was not to be. Did I mention it was Labor Day weekend?

The A&P arrived, made fast work of getting the nose wheel off and the tube replaced, then attached the air pump which he brought with him. We soon discovered that the tube was not inflating. The replacement tube also had a leak. The embarrassed A&P brought one spare tire and one tube, so he jumped in the Skyhawk for the short four-mile flight to 83D to retrieve another tube. 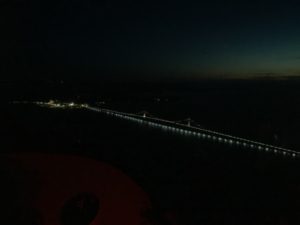 A beautiful view—almost worth the hassle.

The second tube remained inflated and we were ready to depart. During the waiting time we enjoyed a beautiful Mackinac Island sunset, and I was able to secure a hotel at PLN. We took off from runway 08 and departed into the dark, moonless and horizonless night sky over Lake Superior. As we turned back to the southwest, we were presented with a gorgeous view of Mackinac Bridge all lit up. Due to the unforeseen events leading up to the delayed departure, the sunset we experienced and the Mackinac Bridge view at night from a GA airplane was worth the stress of the mechanical event.

The trip to PLN was uneventful, quick, and smooth in the calm nighttime air. With the nosewheel held high on landing and rollout, the new tire and tube did their job. One of the FBO line crew drove us to the terminal for diner, as it was getting near closing time. After a great dinner, it was a short walk across the street to the hotel.

During dinner, my wife mentioned my stress level and was glad we decided to stay the night and not try to return to 3CK. She kindly reminded me that I told her there would be days like this and I should practice what I preach. Since I retired at the end of June, we have flown down to Texas and plan for more trips this winter and next year—with scheduled and un-scheduled stops. Scott Fernandez
Scott grew up around the airlines and airplanes, as his father was a 41-year employee of Pan Am (management positions and not a pilot, although he believes he had the desire to be a pilot). A local flight out of San Juan, Puerto Rico, in a Citabria, convinced Scott to take up flying lessons. In 1973, he earned his PPL and then went on to Embry-Riddle at Daytona Beach, Florida. This was followed by a 5-year stint with Cessna Finance Corporation. The decline in GA (1983) along with raising a family and life in general took him away from aviation until he bought his Cessna 182 in 2015. Now approaching 2,000 flight hours and retired, he and his wife intend to see the country from inside their Cessna.

Rollicking in the clouds
Scroll to top