Many years ago I failed at becoming a CFI. On the first lesson the instructor told me to put the airplane in the climb attitude. He said, “Look out at the horizon, and see the proper angle between the nose, and wing, and the horizon. That’s the climb angle.”

I said, “No, just look in here. See where the little airplane is relative to the horizon on the attitude indicator. And monitor the airspeed indicator and vertical speed indicator. That’s how you determine the proper climb angle.”

No hope for me. To become a CFI I would need to reverse everything I practiced in real life flying and look out the windshield for imprecise attitude and flight path information.

The solution was to skip over becoming a CFI and go straight to CFI-I, where my mission was to tell pilots new to IFR flying to stop looking outside and scan the instruments. 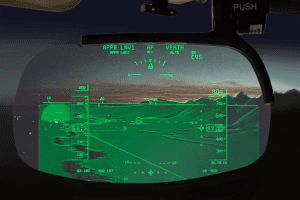 HUDs were once a novelty, but have started to show up in more general aviation airplanes.

Well, it turns out I may have been about 50 years ahead—or behind, depending on your view—of how we will all be able to fly before long. With development of conformal flight displays we will all one day be able to fly as though we are looking out the window on a clear day, no matter the clouds and visibility around us.

The real technology breakthroughs to make perpetual VFR possible came with development of head-up displays (HUD). A HUD displays all essential flight data on a combiner glass in front of the pilot’s eyes. A pilot can look through the glass and see an unobstructed view through the windshield, but thanks to magical optics, also read airspeed, altitude, and most importantly flight path data without changing his eye focus from infinity.

The military was the first adopter of HUD because, for obvious reasons, a fighter pilot needs to have the best possible vision of the threat environment and weapons delivery situation around him. By looking through the HUD glass the pilot can see the target visually, plus all the information needed to properly target the weapons.

Civilians soon realized that a HUD would be extremely useful in low approach conditions because the pilot could see all necessary flight and approach guidance information without taking his focus off the runway that is about to appear out of the murk ahead.

HUD guidance with its flight path marker (PFM) is so precise and so reliable that the FAA certified Category III ILS approaches to be hand flown down to visibilities of 600 feet. Without the HUD, only multi-channel autopilots are certified to fly approaches in such low conditions.

But HUD technology did not spread beyond a minority of transport airplanes and the largest business jets for many years because of the cost and physical size of the equipment.

HUD guidance is so precise because it relies on inertial sensor inputs. Until 20 years ago, or so, inertial guidance systems were large and extremely expensive. They relied on laser ring gyros—or in the early years on a platform of spinning rotary gyros—to measure tiny accelerations and thus calculate the airplane’s precise flight path. And it’s flight path, not attitude, or airspeed, or vertical speed that shows us where the airplane is going instead of where it’s pointed.

In a development few of us saw coming, creation of micro electronic mechanical sensors made it possible to build an inertial sensor so low cost and so compact that we can now see our flight path marker and synthetic vision in airplanes ranging from the largest jets to the smallest homebuilts.

The other size and cost issue with HUD has been the projector and combining lens that makes it possible to see both the view ahead and the displayed data clearly under all light conditions. The system uses a projector that is very bright to shine the data display onto the HUD glass. Miniaturizing the projector has physical limits so cockpit space is an issue. And the electronic and illumination technology required is costly.

However, advances are making it possible to display data on a HUD glass internally without need of an image projector. That can allow for a compact display and will bring cost down exactly as the non-moving gyro development made synthetic vision and flight path display affordable and available.

As HUD technology proliferated at the upper end, it quickly became apparent that the primary flight display (PFD) in the panel needed to change. It is distracting and takes at least a small amount of time to look up and down from a HUD with its image oriented to the real world outside to a conventional PFD with its display centered on the attitude and course data. Thus the conformal display was born. To maximize the benefit of seeing the real world outside through a HUD, the PFD in the panel needs to conform to that view. 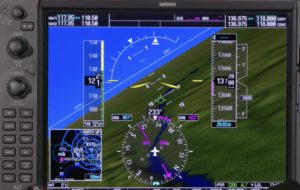 In a conformal PFD the little airplane symbol that has been the center of attitude indicators since the gyro horizon was invented is gone. In its place is the flight path maker (FPM)—a small circle with small horizontal lines to represent the wings—that shows where the airplane is going. Across the center of the conformal display is the zero reference line. It’s not the “artificial horizon” but the point that indicates your flight path is going up or down. If the FPM is above the zero line you’re climbing. Below, you’re descending. Actual pitch attitude information is pushed out to the perimeter of the display. Same for bank angle indicator. Remember, the FPM shows where you’re going, not your attitude.

And the conformal PFD has full screen synthetic vision. So you see the terrain under or around the airplane, and the airport environment just as you would looking out the windshield, or looking through the HUD.

But how do you know the airplane attitude with a conformal display? Exactly as you do looking out the window visual conditions. The entire display background is a synthetic view out the windshield on a clear day. You see the horizon, terrain, obstructions and, if nearby, the airport environment and runways. No interpretation is needed, at least not more than visual flying on a clear day.

Conformal displays are still developing and there is no “standard” format for all symbology and data presentation as we see with conventional flight displays. Falcon’s conformal display looks a little different than Gulfstream’s, and Boeing’s has some differences, too. Everyone has reasons why their format is optimal, but in time the best and most useful features will become common.

The key is that with a full conformal display cockpit we are flying as though we are looking out the window in clear skies while still seeing the most precise flight guidance available. Are you flying instruments, visual, or both? Really both. And that’s the best of all worlds.

I can’t predict when we will see a truly conformal cockpit in piston airplanes, or even the light end turbines. It takes a lot of computer power to refresh the flight display so that it maintains a true image of the world around and under the airplane. But then I never expected to live to see precise flight path marker, synthetic vision, and even rudimentary HUDs in light airplanes. So who knows?

Maybe when the conformal display cockpit arrives in light airplanes I’ll go back and get that CFI because I can look outside and see the instrument data at the same time.