Blog - Latest News
You are here: Home1 / Article Archive2 / I was there3 / Witness to an airplane crash 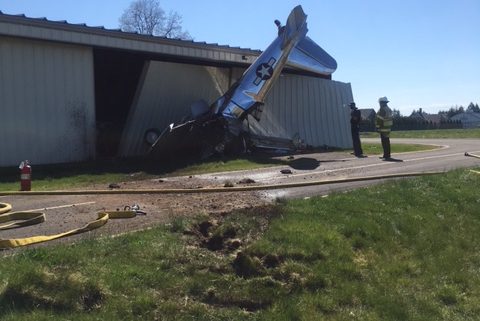 I closed the hangar doors and was getting ready to go do a little Sportsman in my Cub. I gave it one more walkaround on the taxiway, outside of the hangar, as I always did before I flew. The wind sock was saying typical WNW-NW breeze and the usual five knot crosswind component on our runway 26 here in Camas, Washington. On final for the runway, I saw the alternating blink of landing lights of a BT-13 that was based on the field. It’s a pilot thing. I watch takeoffs and landings.

The BT squatted in a three-point landing about 500 ft. from the end of the runway. As it rolled it seemed to be doing that walk to the left that every taildragger pilot has experienced in a crosswind. At about the 1000-foot marker the left wheel eased off the side of the runway. 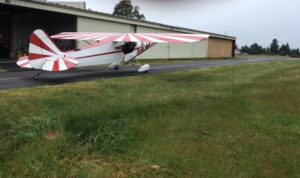 A casual flight turns into something much more serious—without even leaving the ground.

My mind perked up. “This is going to be interesting,” I said to myself.

Then I heard it. A roar of coughing R-985 power from the trainer. I could see the airplane slewing further left with the torque and aiming pretty close to my hangar. The pilot yanked and somehow it went airborne. There was never a question in my mind that it was going to fly—it wasn’t. I was mesmerized and the silver Vultee went past me 30 feet in the air. The wings were screaming for lift but had none. It just kept torquing, left wing getting lower.

The left wingtip scraped the ground fifty feet short of the taxiway I was standing on, then the prop hit the edge of the taxiway as the airplane slammed into the ground. There was a palpable boom shockwave that I could feel against my body. It was the dissipation of massive energy all at once. From power-up to boom was less than ten seconds.

I covered the 90 feet from my hangar to the crash scene two hangars down. The airplane had turned canopy out as it hit. I didn’t see any fire. The airplane was near vertical against a hangar door, standing on its nose. A shower of debris, mostly stones and chunks of taxiway, rained down around me. There was a strong smell of gas, but no flames, and as I arrived a body popped out of the airplane. He was alive, moaning a little.

He replied emphatically, “Hell no.”

“Okay, but there’s a lot of gas. If we get any fire I’m dragging you.”

I dialed 911 as I walked to the front of the airplane. Gas was pouring out but there was no smoke or flame. I really couldn’t see any front cockpit left at all. The engine had been rolled up into it as if it were a sardine can. About that time, people started showing up. One guy had some medical experience and he was tending to the backseat guy.

A lot of people started showing up and I tried to get someone to open the security gate to the airport so the cops could get in. No one moved, so I grabbed the motorcycle out of my hangar and headed to the gate.

The police showed up as I got the gate open. Right behind him was the EMT wagon. They followed me to the scene and I stood back and watched from that point. More trucks, sheriffs, police, and a lot of other things with lights rolled in. 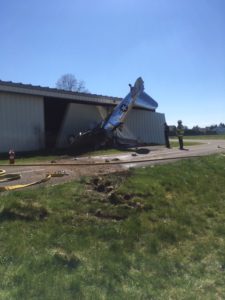 A terrible sight for any pilot.

Result: the pilot was killed, the backseat guy went to the hospital, and the airplane was destroyed—as was the Navion in the hangar that they hit.

Three days after, I was going to get that Cub flight I’d missed and a fellow walked by me with his wife. His hand was bandaged and casted. I walked the 90 feet to the hangar where they were standing and asked him if he was the gentleman who had the honor of surviving the crash. He said that he was.

“You… are a miracle. I’ve never seen that much energy dissipated in such a short period of time. I can’t imagine the G force you felt. I cannot believe you are alive.”

He said that was all he remembered about the crash, that feeling of G force against the straps. The inspectors determined that the canopy had ripped out of the tracks and his seat ripped right out of the floor. He had a helmet on and his helmet hit the panel. The force drove it down into his cheek and caused a big gash. His left arm went into the throttle area and got pretty torn up, and other than that, he just hurt like crazy all over. We chatted a while longer and all I could tell him was that he was a miracle.

The helmet and the 5-point belt system saved him. That was part of the miracle, but there were other things. First of all, no fire. Secondly, the airplane hit wingtip, prop, then engine and that caused it to turn 180 degrees before it came to rest. Thirdly, the canopy ripped off. All of this left him in a position to pop his 5-point and flop out on the apron of the hangar. He was just delivered to the rescue team, ready to be saved.

Couple of points: There was no mechanical problem, so speculation would say a little aileron into the wind would have kept the airplane on the runway. A little rudder would have gotten it back on the runway. Something I’ve preached for a long time and is just common sense: when you leave the surface, just ride it out. The only thing power is going to do is get you to the scene of the crash quicker and more violently.

Go or No Go: Cirrus vs. southern storms
Scroll to top