Blog - Latest News
You are here: Home1 / Article Archive2 / I was there3 / One last visit to a dying airport 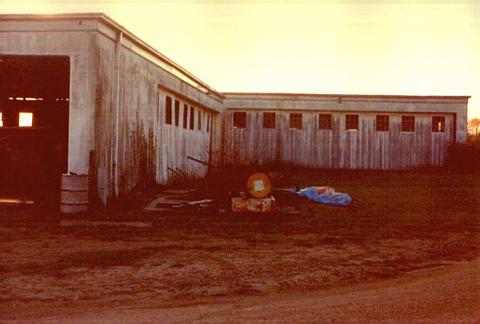 The dirt road into the airport had a gate across it. It was made of heavy-duty, galvanized pipe welded in the shape of a triangle, hinged on one side and secured to a substantial iron post by a rusty chain and padlock. I left the car in front of the gate, lengthwise. The fresh air was a welcome respite from the cheap rental car. They always smelled like smoke, cheap perfume, and whatever. I grabbed what was left of a six-pack from the passenger’s seat, laughed at the crumpled tie under it, and locked the car.

The fresh air smelled sweet and familiar in the misting rain. Entering the dirt entry road it was about a quarter mile down to the airport, and coming up over the rise I saw the hangars, solid, gray concrete boxes, unchanged for half a century. The airport was overgrown.

If walls could talk…

At the first hangar, I noticed a few more windows broken, but they were all high up, so there was no looking in, but I could tell it was empty. There was an empty sound to it sitting there. The little white pebbles that were against the concrete slab the structure sat on were still there, still brilliantly white, washed and rewashed by decades of rain rolling off of the roof onto them. The big door was hard to slide on its rollers. We used to oil them every year at the beginning of the season and that hadn’t been done for a while.

When I looked in, the hangar was starkly empty. There were a couple of old boxes, a ripped plastic tarp, and a coat of dirt on the concrete floor. It was the same hangar, but the Cubs and Cruisers, the barrels of smoke oil, the banners, airplane parts, tools—all of the things that gave a hangar life—were long gone.

Standing there, I tried to recapture the feel of a summer day when the hangar was full of airplanes and promise. I just felt sad and tossed an empty beer can into the middle of the deserted space. At the next hangar, it too was empty, which looked very odd since it had always been full of the town’s road department equipment with a giant pile of salted sand in the middle of it.

I started down toward the main hangar and offices. The gas pumps were still there, but the hoses were missing. When they were first installed, it felt very modern to have low-profile pumps that a Cub wing would clear. Now, the glass was broken out and the paint on them was a chalky white with even chalkier red lettering. Right next to these same pumps a man died in a helicopter on a beautiful, sunny day because he made a mistake, a little mistake that took his life.

All of the railroad ties that we used to outline a semblance of a parking area were gone. The smaller hangar had an office on either side and enough space to fit three or four airplanes comfortably so that there was room to work on them. The first office had been the town’s road department office and the office on the far end was the flight school. They all faced the airport and the flight school had a picture window. The road department office and the hangar were in the same state of disuse as the other hangars. The flight school office had a lot of junk everywhere.

I saw a pile of old logbooks. Students used to leave their logs at the airport with their names printed on the edges of the pages. They stood side-by-side on a table behind the counter next to the cashbox. Now, they were a pile of discarded, long-forgotten dreams. On the floor, scuffed and dirty, next to the logbooks, was the solo board. Someone, before I got there, had crafted a large piece of sturdy white cardboard with blocks to record the latest solo or license. After a solo, you could see the student beam with pilotness as the instructor inked in the date, his name, the type of airplane, and the almighty initials that made everything official. I knew exactly where my name was: Nov 6, 1968-Cessna 150-W.J.N., the great William J. Nauta had been my instructor.

The room was a maelstrom but it was exactly the same as it had been almost 30 years earlier, the first time I saw it. None of the mess, none of the broken, interrupted my vision. I could still feel it, still see it clearly. I’d grown up in this room, on this airport, celebrated my first solo, my licenses. All of the milestones of my nascent career in aviation were here. My first love had been consummated just a few feet from where I stood. This airport had been my heart and soul from my late teens for more than several years. I could hear WNEW dribbling out of the crappy radio on the counter, the Coke machine whining, smell the vague noxiousness of the heat from the propane heater. I could see the men that would never be forgotten to me, the instructors that would guide me and help me to get my licenses.

It didn’t look like much, but this little airport made a lot of pilots.

Out of the front window, the tie-downs were still filled with the flight school airplanes: Cessna 150s, 172s, Tri-Pacers, and Colts. Each airplane had as distinct a personality as any of the people I remember. To the left was the row of tie-downs starting with the flight school Cub and glider, then one after the other: a Cessna 140, a Cessna 120, a Commonwealth, a prewar Chief with the exhaust manifold sticking out of the top of the cowling, and on… I knew them all. It was intoxicating to see them so clearly: the airplanes, the people, to hear the instructor’s voices. I was home. I could feel it but couldn’t touch it. I’d wandered too far.

Stepping outside, the payphone next to the door was gone. The bare, oil-soaked, compacted dirt spots where each airplane had sat and leaked its vital fluids still bore witness to the life of an airport that had been lived. They were sorrowful, stubborn stains that would not wash away. I walked toward the outline of the main runway. The wind tee was gone. Someone had mounted an old drone on a pipe, smeared it with bright yellow marker paint and it had guided a generation of pilots to land into the wind, most of the time. It was gone. Large furrows had been plowed across both runways to keep transient airplanes out. All I could think was, “hell, I could still land a Cub here with room to spare.” I walked some more as the sun got low. The cornfields that bordered the runways were gone, the hill where I picked up banners was grown over.

Walking back toward the office, the airport looked worn and broken. Soon enough, someone would clear it and make it something important to the world as the 21st century was ushered in. They’d plow under the oil stains, all of them. What had been my heart and soul, my lifeblood, was in the very throes of its last gasps at life. I’d wandered too far and it died without me being there.

I realized there was nothing at the office for me. I thought about grabbing the solo board, but I had to get going. I was seeing a friend to tip a few and besides, I had to jump on a smoker back home in a few days and it wouldn’t fit in the airplane.

I turned up past the pumps onto the dirt road to leave. As I passed, I said good-bye to the hangar where the banner planes had been. There was a magnetism that drew me toward it. I tried to walk by. I didn’t want to try to reconcile myself with who I’d been. I’d loved those airplanes and I’d loved that life, at the airport. I stood in the spot where my Cub had sat, the one I towed banners with for eight seasons. I never again experienced that pure joy, never matched the love of life I’d felt every day at that airport. With tears in my eyes I pushed out into the darkness and into the night.

An airline pilot gets reacquainted with piston engines—and engine failure...