Blog - Latest News
You are here: Home1 / Article Archive2 / I was there3 / Life in an airplane, on and off the water

I earned my private pilot certificate in 1969 and enjoyed flying for several years before life got in the way. After a hiatus of some 30 years, I returned to the sky and have been flying regularly since with a few interruptions for this or that. A couple of years ago, a friend and I purchased an Ercoupe and we enjoy the semi-open cockpit and low and slow flying. Neither of us have a current medical so we use Sport Pilot privileges.

Having tired of the $100 hamburger runs, I decided to shoot for a seaplane rating. You can get an endorsement for ASES LSA, which results in a new certificate, or a full ASES.

Several places offer the LSA version, Jack Brown’s Seaplane Base in Winter Haven, Florida, probably the best known and who use J-3 Cubs. Last summer, I went to Jack Brown’s to take their three day course. All went well and I was signed off for the proficiency check with another instructor. That did not go well, as I was really too fatigued to meet the standards. I could return to Brown’s for another try but decided to file that as a really fun experience with a whole different environment. 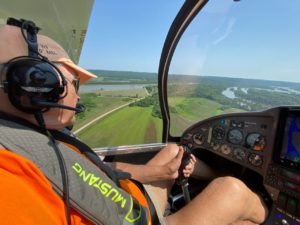 The SeaRey is a fun way to earn a seaplane rating.

This year, I got the itch again and started to watch some YouTube channels about seaplanes where I discovered the Progressive Aerodyne SeaRey LSA amphibious flying boat. Further research led me to Flying Fish, which has their home base at St. Charles Regional Airport (SET), near St. Louis, Missouri.

I signed up for a short course in seaplane flying and to hopefully actually get my ASES LSA rating. It is a three day program with six hours of flight time in a SeaRay, including either a proficiency check with a different instructor for the LSA version or a checkride with a Designated Pilot Examiner for the full version. The full ASES is $700 more, which includes the examiner’s fee.

Flying Fish provides study material prior to arrival so I was familiar with the ideas about water ops and the SeaRey. The first day was a short ground school on the basics of water ops (which was more of a refresher for me) and then out to the SeaRey for preflight. Scott, my instructor, walked me a thorough preflight and we “boarded” the flying boat. The Rotax engine was balky for the start, it being a 90 degree day. After consulting with Chris, the company owner, the engine started on the next try. With that we taxied for takeoff in the middle of a Young Eagles day by the local EAA Chapter.

The SeaRey is a fun plane to fly and very well mannered on the water and in the air. You do have to be prepared for pitch changes with different power settings, with the high thrust line of the Rotax pusher engine. On terra firma, landings and takeoffs are typical tailwheel operation and it can be exciting at times.

We spent two hours mostly “see then do,” and at the end I was accomplishing sort of decent normal water landings and takeoffs on the three rivers near the airport, including the mighty Mississippi, and making a “torpedo attack” on a river barge gaggle.

The biggest difference from land plane landing technique is the fact there are no brakes on the water of course, so it pays to know where you’re going to end up. Another fact is the plane will stop in a much shorter distance in the water than the required takeoff run, so you might wind up stuck with no way out if it’s a small body of water. 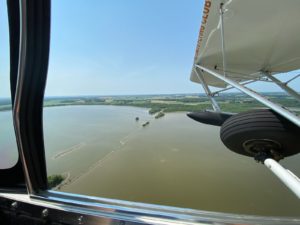 You can land there, but can you take off again?

Critically, no landing is on the same “runway” so a thorough look at the landing area (called a site survey) must be made prior to an attempt. Logs, jet skis, power boats, barges, fishermen anchored or floating with the current, alligators, and whatever may have floated to the surface after a storm are just some of the possible obstacles one doesn’t usually encounter on a runway.

On the other hand, instead of squinting and searching for a forlorn and faded windsock that blends into a background of multicolored grass and vegetation, water flying wind detection is simple for takeoff—where it is more critical than landing, at least in a confined area. Just idle power, let go of the controls, and the plane will weathervane into the wind.

A “normal” water landing is just like a land one with a normal pattern and in the SeaRey, checking gear up on each portion of the pattern. Landing gear down will result in the plane flipping upside down and use of the life vest and a phone to call the insurance carrier.

After a good debrief, I went back to the hotel for some serious chair flying.

The second day started with a ground review and the Rotax fired right up this time when we tried. This day was spent on various special types of water landings, including the most dangerous type: glassy water. Here you have zero idea of your height above the surface, so you just fly it on in a less violent version of a carrier landing. Two others are rough water, which is done very similar to a soft field one, and confined area, where you approach over the obstacle, chop power, and drop quickly to splashdown.

Takeoffs consist of getting the hull “on the step” by applying full aft stick, letting the nose rise, relaxing back pressure, and letting the plane fly off.

Since I never water landed with the gear down, a major catastrophe in a seaplane as I noted, and apparently performed adequately otherwise, Scott signed me off for the proficiency check with Chris as the CFI. That would make strike two if I flubbed the checkride again. Scott was always available to answer questions while I did some more chair flying that evening.

The next day, Scott went through an oral review of seaplane stuff before turning me over to Chris. 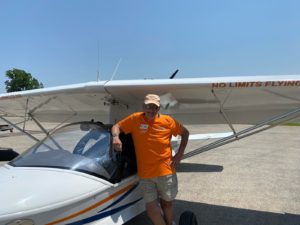 We took to the task of flying on a pretty gusty day after the oral and Chris would request a type of landing and let me screw up or squeak by each type. One of the more interesting maneuvers was engine failure, where you sort of point the airplane right down at the river or lake to maintain high enough flying speed as to not become a submarine or drop straight down after stalling on roundout. The whole ride took about an hour, including a brief formation join-up with a passing bald eagle and at the end, Chris signed me off as a seaplane LSA pilot.

It was one of the most fun things I’ve done in an aircraft. This included taxiing out of the river up a boat ramp, parking in a riverside restaurant parking lot, and having lunch.

If you’re looking for a good diversion from your standard flying, check out Flying Fish and pick up another rating. They have two locations, the one I chose in St. Charles and the second in Winter Haven, Florida. Even if you fail the checkride, it’s a blast plopping down in the H2O—I know both results now. I’m very glad I am now a rated seaplane pilot and didn’t strike out, but if I did it would have been well worth the money spent. Rick Abell
Rick was an engineer for the USAF for 32 years and worked on the development of every USAF tactical aircraft type from 1964 to 1997. He was chief USAF engineer for the YF-22 and YF-23, F-22, C-17 and a classified airplane. He is now retired and loving it (he did a little part time aerospace consulting after retiring from the USAF). He has a Private Pilot ASEL, ASES, and tailwheel endorsement. He is the co-owner of a 1946 Ercoupe and the sole owner of an Aerolite 103. He spends the winter skiing in Steamboat Springs when it’s too cold to fly in Ohio.

Approach, I need the nearest airport

The right pilot mindset: realistic, not conservative
Scroll to top