Blog - Latest News
You are here: Home1 / Article Archive2 / I was there3 / Approach, I need the nearest airport

I remember the first time my primary flight instructor lectured me on the importance of proper flight planning. “Don’t put the airplane too far from a safe landing area; you never know when you may need it,” he would say to me as I used my plotter to pick VFR checkpoints. “When you lose that engine, you become a glider—and a pretty inefficient one. Give yourself a fighting chance.” I’m paraphrasing, but any good instructor will teach to that affect. After I became a flight instructor, I would instill the very same principles of good situational awareness.

The flight school I teach at has multiple locations within the United States. Throughout my two years with the company, it has been common to swap aircraft from one location to another. Sometimes that’s from Miami to New York or other city pairs. The flights are scheduled to be dual instruction, likely with a student working toward an instrument or commercial certificate. This offers a great opportunity to add some real-world cross-country time to their logbook. I was approached last minute on a Thursday, to do an airplane swap from Pompano Beach Airpark (PMP) in Florida to Morristown Municipal (MMU) in New Jersey. Feeling lucky to have been asked, I jumped on the opportunity to get some flight time. 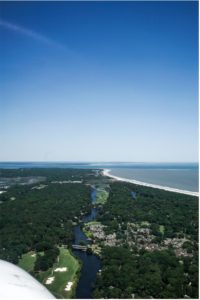 A 1000-mile cross country is a great way to learn some real world skills and visit new places.

My student for the flight was named Mitch. He was a younger guy working on the later parts of his commercial single engine certificate. I had known Mitch from seeing him around the flight school, but never actually had him as a student throughout his time with us.

We were set to depart for New Jersey on Friday, May 14th. Mitch and I agreed to leave as early as practical, so we set a departure time around 7 am to give us an edge on the day. It is always a great call to allow extra time for any unforeseen scenarios, especially when you are trying to fly a light, single engine aircraft over 1,000 nautical miles in a day. Our weather all the way up the east coast was mostly clear skies, as a nice springtime high was overhead.

Meeting that morning we were surprised to find the school had made a late day schedule adjustment and put a solo student pilot in our airplane for a few hours. We made some flight plan adjustments due to what turned into a delay of over two hours. This put us behind the ball, but it was still early enough to attempt being in Jersey by 9 pm. Worst case, we would land short of our destination and finish the next morning.

We were wheels up out of Pompano at 10:02, IFR en route to our first stop in Hilton Head, South Carolina (HXD). Our flight to Hilton Head was rather routine up the East Coast, with nice views of Florida, over Georgia, and into South Carolina. The weather was severe clear with gusty winds out of the east for our landing on runway 03 at 13:35. Our fuel stop there was enjoyable, to say the least, with a quick bite to eat at a local BBQ joint.

We departed Hilton Head at 15:03 on our way to grab more fuel in Norfolk, Virginia (ORF). This leg was also uneventful, but slightly turbulent with us flying over well-known Myrtle Beach. We landed in Virginia at 18:23 for more fuel before the last leg. Once we left Virginia at 18:58, we knew our approximate ETA in New Jersey was going to be 21:00. Heading into Pennsylvania at dusk, we got vectored directly over Philadelphia, which provided some stellar views of the historic American city. 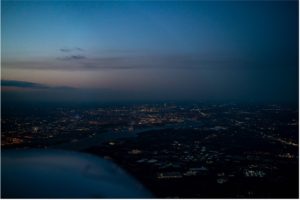 A great view of Philadelphia at dusk.

Once we arrived in Morristown we were greeted by a fellow instructor who works for our company. He was friendly and I asked which aircraft we had the pleasure of taking back with us to Florida. His response: “Ha! Luckily you are taking NXXXHG! Good riddance!”

I looked at him confused. “Sorry?” I said, not sure what he was implying.

“Oh no, nothing bad. It’s just that XHG and I go a ways back. She runs fine!” Still unsure of his relief the airplane would no longer be a part of their fleet, our Uber arrived and brought us to a nearby hotel.

Early the next morning, after much-needed sleep, Mitch and I made it to the school. We wanted to make good time on Saturday, so we shot for an ETD of 07:40. I was greeted by three instructors, who had asked me which aircraft I was flying back to Florida. “We’re flying NXXXHG back down,” I said.

The three expressed their relief. “Oh thank God we’re getting rid of that plane!” one exclaimed.

At this point, I was annoyed with the obvious glee that this airplane would no longer be around. “What the heck? Why is everyone so glad this airplane is leaving?” I asked rather abruptly.

“You know it’s nothing, just a quirky airplane is all,” one replied.

“The airplane is in perfect working order,” I was assured.

After a thorough preflight inspection, and an extra quart of oil, at 07:47 we were wheels up out of New Jersey. Our southeast-bound turn to the Colts Neck VOR gave us a spectacular view of early morning Manhattan. New York departure was not as busy as I had always imagined it would be, I thought to myself. Our first airport of choice was Wilmington, North Carolina (ILM) for more fuel. This would end up being our longest leg of the trip at almost 450nm. We touched down at 12:10. Sure pays to depart early! 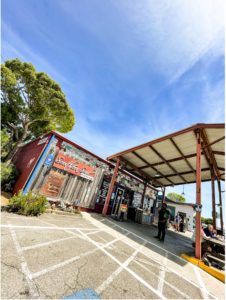 The next leg was to St. Simons (SSI), an island on Georgia’s coast that has quite the reputation amongst pilots for excellent barbecue. Stopping around 14:20, we filled our stomachs and the fuel tanks then made our departure at 15:07 for the final leg home. The rumors are true—the BBQ rocked!

Satisfied with our progress, in part due to a modest tailwind, we were expecting touchdown in Pompano at 18:00. As we made our way down the east coast of Florida, all our familiar airports were now under us and in our sights. Passing over Melbourne, we got switched to Palm Beach Approach—so close! Palm Beach is essentially the last approach controller before Pompano.

“NXXXHG good evening, Palm Beach altimeter 30.07. Expect a route change in one five miles, direct Pahokee VOR, then SHANK intersection to Pompano,” he stated. Our filed IFR route was right along the coast on V3, TRV, and then the PBI VOR of Palm Beach, but as expected the controller advised us of a routing change that would put us west of Palm Beach International, over Pahokee—right off lake Okeechobee’s coast. I told the controller we would just cancel IFR and stay on for flight following along the coastline. This not only saved us some time, but it also provided one or two more airport options for landing if it became necessary.

We made a course change southeasterly to join the coastline about 15 miles south of Melbourne International, essentially keeping us on our original IFR filed route. Florida’s east coast is littered with class D and G airports, plus it offers a welcoming view of our great state. We descended from our 4,000 foot cruise altitude to a VFR one of 3,500. Everything was looking nice as we were now approximately 30 minutes out—right on time!

After passing by Fort Pierce (FPR), we experienced a large loss of power and severe vibrations from the engine. Soon after came a petroleum-based smell. Oil? I looked and saw no engine indications of excessive oil temperature, pressure, or exhaust gas. Unfortunately, this aircraft was not equipped with optional cylinder head temperature gauges. I set the mixture for full rich and took the airplane over from the student. “My controls,” I stated. “Your controls,” replied my student, following up with my confirmation. Something was massively wrong here. 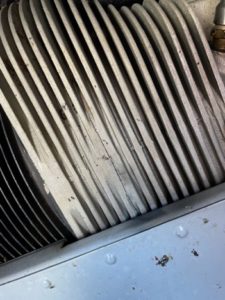 “XHG. We are experiencing severe engine roughness. I need the nearest airport,” I stated.

“XHG roger, turn right heading 330,” ATC instructed. As this happened, I was focused on maintaining positive control of the airplane and trying to maintain my valuable altitude. Whatever had happened wasn’t immediately clear to me. Maybe I lost a magneto? Maybe the alternator belt snapped and it is whipping around? Volts and amps all good.

As I turned north the vibration was worsening, even with my small power reduction. “This engine is about to fail,” I said to myself. I was running at around 2,100 RPM, which I found to be the smoothest power setting but also not so low that it would result in excessive altitude loss.

At this point, we were headed direct to Ft. Pierce. I was still trying my best to have the airplane maintain altitude, and picked out a landing spot in case the engine quit altogether. My student sat quietly and assisted with finding the airport.

“Negative, but I may,” I replied. The airplane wasn’t getting any happier. The engine was struggling, misfiring, and way out of balance, so I traded altitude for performance and maintained around 85 knots.

We made the frequency change over to Fort Pierce tower, who also asked if we needed emergency services. “Not yet,” I said.

“I’ll take straight-in 32, thanks,” I said. At this point, I was at 2000 feet, on a 4-mile final. I cautiously began to descend, feeling assured I could make the field. The gusty crosswind landing was smooth, and we taxied over to the FBO.

After much deliberation and inspecting, I was able to spot a crack in the cylinder wall of cylinder number one. “Well, that’ll do it,” I said while showing my student. We were glad to have our feet on the ground.

I couldn’t help but think back to how important the decision to remain over the coast turned out to be. If we had stayed IFR and went west of Palm Beach, it may have put airport options just that much farther away, and I’ll never know with the partial performance I was getting from the engine if an airport landing would have been in the cards. It sure pays to know where you are, where you are going, and how you plan on getting there. Stephan Vlachos
Stephan Vlachos is a commercial pilot and two-year flight instructor who began flying in 2017 after a childhood filled with the curiosities of aviation. After graduating from Florida Atlantic University with a business degree, he acquired all the necessary ratings to start his journey toward becoming a professional pilot. Now at over 1,000 hours, Stephan aspires to enter the corporate side of aviation, before heading to a major airline.

Life in an airplane, on and off the water
Scroll to top